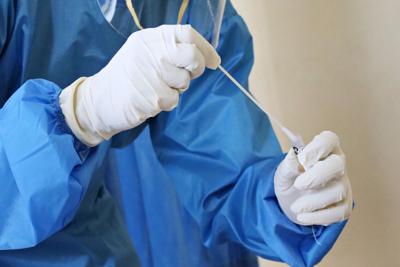 Look at the U.S. as a whole, and the COVID-19 picture is brighter than it was during the thick of our first pandemic holidays.

Cases, hospitalizations and deaths are all down compared to Thanksgiving 2020, despite the fact that the variant circulating now, Delta, is significantly more transmissible than the virus being passed around last winter.

But the U.S. average belies the surge of cases hitting New England, and the Berkshires.

In Massachusetts, the rolling average of new cases rose 83 percent over the last two weeks. The two-week increase has been smaller in the Berkshires — just 52 percent — but only because cases were already quite high here, well above the state’s caseload on a per capita basis.

By case counts alone, the COVID-19 predicament in the county looks far worse than it did this time last year.

And yet, vaccinations appear to have changed the playing field: even as cases spike, deaths and hospitalizations remain extremely low relative to last winter’s surge.

The bad newsAs of Wednesday, the seven-day rolling average of new cases in Berkshire County had almost hit 70 cases per day, according to state data.

That’s twice as high as the case rate on the Wednesday before Thanksgiving last year: just 37 new cases per day.

It’s also nearing the highest recorded level of new cases in the county: about 76 per day, a record set in January 2021 amid the worst of the winter surge.

On a per capita basis, Massachusetts ranks 25th worst for new cases, according to the Boston Globe. If Berkshire County were its own state, it would rank 7th.

The good newsThere’s a couple major signs this year’s case surge will not be as bad as last year’s: hospitalizations and deaths.

Though the region is seeing far more cases than this time last years, hospitalizations are only a tick above last Thanksgiving, suggesting that the vaccines are doing their job keeping many cases of severe COVID-19 at bay.

In the week leading up to Thanksgiving 2020, Berkshire Health Systems had between 9 and 12 hospitalized COVID-19 patients on any given day. Over the same period this year, the inpatient count has ranged from 10 to 14.

For a better comparison, we can look at the last time cases were this high and rising. That was early January, near the height of the winter surge.

At that point, the hospital system was caring for about 50 inpatients. About 20 people were dying of the virus each week.

This time around, just 14 people are hospitalized and two to three people are dying each week.

Last winter, Thanksgiving marked a turning point. Cases, hospitalizations and deaths surged. By mid-December, the hospital had 40 inpatients, and, at its most deadly point, COVID-19 killed four county residents each day.

But this year, experts say it is hard to determine what will happen.

A large portion of the population is vaccinated, compared to zero percent this time last year. Data from the late summer showed that the vaccines are extremely effective at keeping people out of hospitals: unvaccinated people were dying at 11 times the rate of vaccinated people, according to the Centers for Disease Control and Prevention.

Now boosters are rolling out, returning many vaccinated people to the levels of immunity they enjoyed after their first two shots.

On the other hand, around one in three people in the Berkshires are not fully vaccinated, per state data. The county’s vaccination rate is well above many states but still lower than Massachusetts as a whole.

Then there’s the variant.

“This is our first Delta winter,” Dr. Nahid Bhadelia, founding director of the Boston University Center for Emerging Infectious Diseases Policy and Research, told The Globe. “We don’t know how Delta will behave.”

Here’s the bad news: A surge in novel coronavirus cases tells us that this stubborn pandemic is still with us, much as we wish it weren’t.

This COVID surge is not like the last. Berkshire Health Systems officials explain why

Last year, Berkshire doctors were talking about what would happen if they had to ration care. This time around, few COVID-19 patients are seeing the inside of the ICU.