STOCKBRIDGE — A fight raging at school board meetings nationwide played out in the Berkshires Thursday after a resident sent school officials a notice saying that their masking mandates for children to curb the spread of COVID-19 is possibly unhealthy and could be a violation of human rights under the Nuremberg Code.

Great Barrington resident Dattatreya Haynes had suggested in his email that, at the least, masking mandates should be suspended pending more studies of the risks and benefits.

But officials blocked Haynes from speaking during a public comment period at the Berkshire Hills Regional School District’s School Committee’s meeting, held on Zoom, with 23 participants.

“I think we all anticipate that what we are about to hear is the use of this forum to propagate an absurd disinformation campaign that has been trolling on social media for a year,” said school committee member Richard Dohoney.

Haynes said that as a citizen he had a right to speak for three minutes. Chairman Stephen Bannon said he would adjourn.

“It is the will of the chairman to decide whether the public is going to speak and your email spoke for yourself,” Bannon said, noting that the district is under state orders to enforce the mask mandate. 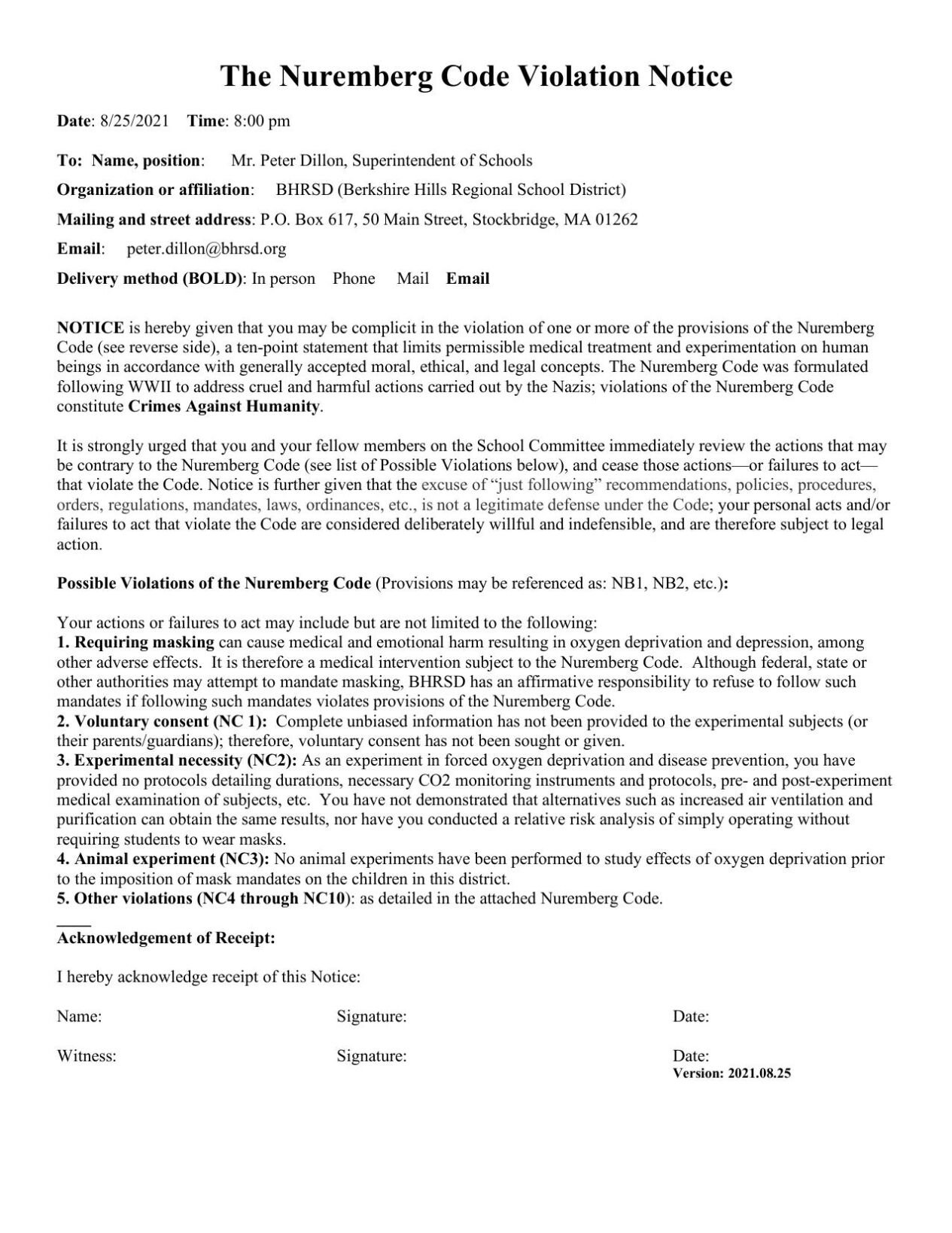 The violation notice, which Haynes sent to officials on Wednesday, says masks could cause “medical and emotional harm resulting in oxygen deprivation and depression, among other adverse effects.”

His note comes days after the state Department of Elementary and Secondary Education mandated masking in public schools statewide through Oct. 1. Berkshire Hills had voted earlier this month to require masks, and it was the first district in the state to mandate vaccinations for teachers. The district is planning to do extensive testing as school begins next week.

The Centers for Disease Control and Prevention recommends wearing masks indoors, regardless of vaccination status, in locations with substantial or high transmission levels. Berkshire County has high transmission, according to the agency. The county had nine hospitalizations as of Wednesday, and is averaging 25 new cases a day.

The letter sent to Berkshire Hills officials by Dattatreya Haynes

Haynes says the mandate may violate the Nuremberg Code, an international code meant to prevent inhumane and unethical experiments and treatment of humans, established by the Nuremberg trials and military tribunals that prosecuted Nazis for such crimes.

In this case, Haynes says the possible violations are what amount to an “oxygen deprivation medical experiment” foisted on children without consent, and without having vetted other alternatives such as “increased air ventilation and purification,” and by not first studying the effects of masks on animals.

The debate over whether masks are harmful to children when worn for extended periods is considered closed as medical experts continue to debunk the claim, despite resistance from some other experts. It has also been decreed a pointless debate, with masking thought to curb the spread of the virus as the U.S. continues to reel from its effects on public health, the economy and the country’s social fabric.

The American Pediatric Association is clear in its message that even extended mask-wearing is safe for children, responding to concerns about low blood oxygen levels that can lead to fatigue, headaches and dizziness, among other symptoms.

“Masks will not affect your child’s ability to focus or learn in school,” says the APA’s blog. “The vast majority of children age 2 or older can safely wear face masks for extended periods of time, such as the school day or at child care. This includes children with many medical conditions.”

Berkshire Hills mandates vaccines for staff, masks for everyone at Great Barrington schools

The district will bargain with the teachers union over the vaccine mandate, and medical and religious exemptions will be considered and reviewed by officials and lawyers.

Yet, the nation is still torn by lingering questions, as Haynes illustrates. This has played out in the Journal of the American Medical Association, which retracted one study in July showing adverse effects on children of breathing carbon dioxide amassing at high levels inside the mask. Another study of young children in Italy found that wearing face masks for 30 minutes didn’t change respiration or cause distress.

The Reuters news service has repeatedly been debunking claims whipping through social media that carbon dioxide intake from mask-wearing can reach levels in the blood that can cause dizziness, drowsiness, fatigue, headaches, and on the more severe end, loss of consciousness.

“While breathing in excessive amounts of CO2 [carbon dioxide] for large amounts of time can be dangerous, it is unlikely that the general public would suffer from these complications by wearing a mask,” says a Reuters fact-check story. “Most people would wear face coverings on short stints outside their home as a complementary measure to social isolation.“

A CDC official told Reuters that CO2 levels slowly increase inside the mask. “However, the level of CO2 likely to build up in the mask is mostly tolerable to people exposed to it. You might get a headache but you most likely [would] not suffer the symptoms observed at much higher levels of CO2. The mask can become uncomfortable for a variety of reasons including a sensitivity to CO2 and the person will be motivated to remove the mask. It is unlikely that wearing a mask will cause hypercapnia.”

Earlier Wednesday committee member Richard Dohoney responded to Haynes’ email, telling him not to respond to his email nor to ever contact him again.

“Your purported ‘notice’ is factually and legally incorrect, frivolous and sent in bad faith,” Dohoney wrote.

“This is crazy, crazy stuff,” Dohoney told The Eagle, adding that Haynes’ approach is blunting discourse.

Haynes, an MIT graduate and retired mechanical engineer who specialized in ventilation, told The Eagle that he had had “a congenial discussion” with Superintendent Peter Dillion Thursday, who he said assured Haynes that he could present the information at the meeting.

“He expressed genuine interest in the subject, and we discussed steps that BHRSD is taking to address ventilation conditions,” Haynes said, adding that he’ll also send his notice to state education officials.

Haynes said he is open and curious, and wants government agencies to also continue to examine the effects on children so the health issue can be put to bed. He wants to see more studies, particularly by the CDC.

One study of Georgia elementary schools found that the incidence of COVID cases was 37 percent lower in schools that required student and teacher masking and 39 percent lower if ventilation was improved.