PITTSFIELD — Superintendent Joseph Curtis will announce Friday afternoon whether Pittsfield Public Schools will continue to require masking for students and staff past the end of the state mandate that expires at the end of the month.

“I do certainly feel well-informed, and I appreciate the trust of the [School Committee], and I’m hoping that we have the majority of consensus after Friday’s information release,” Curtis said to the district’s policy subcommittee Wednesday night. 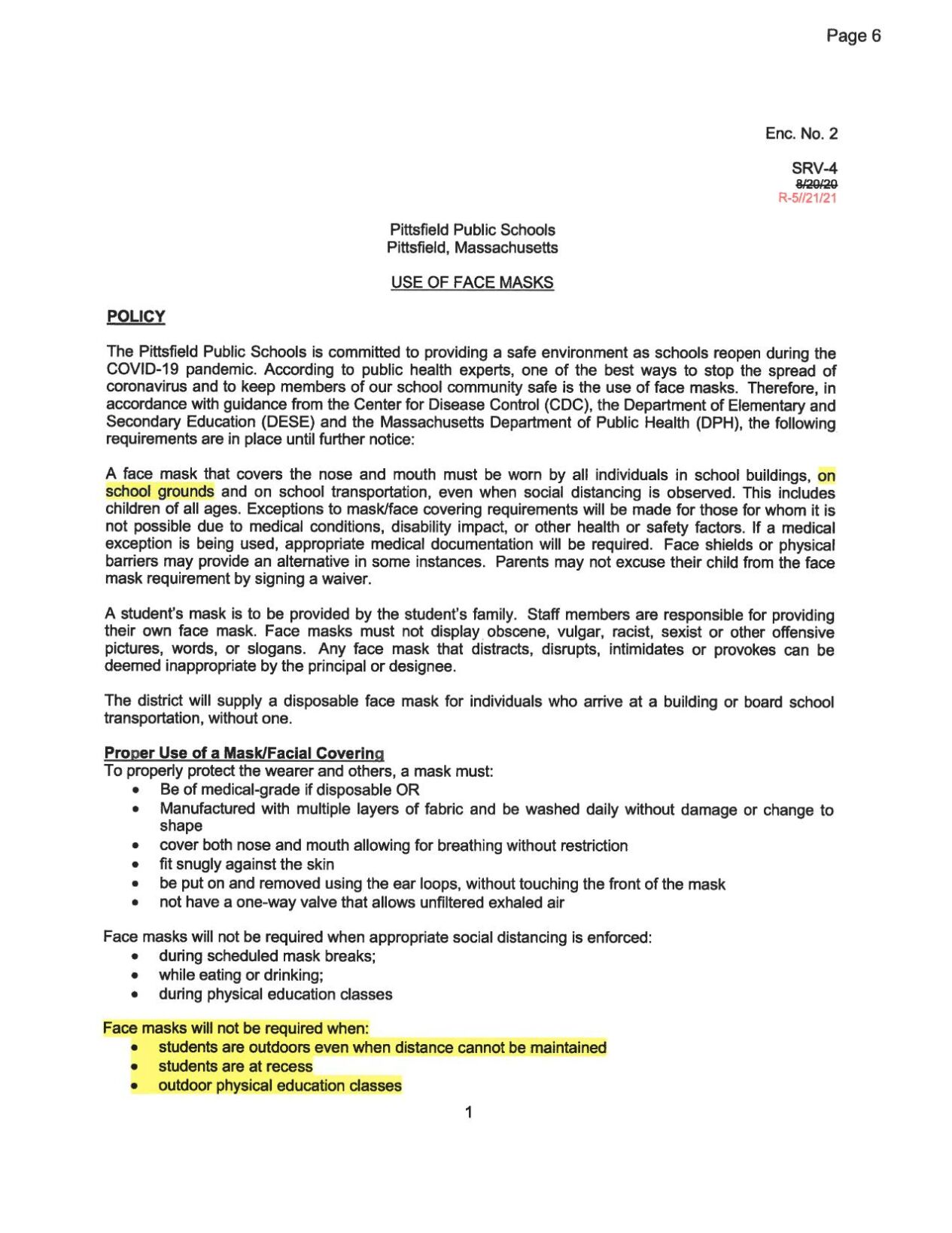 The superintendent held off from making an explicit statement about which way he was leaning on the issue, though in a response to committee member Sara Hathaway’s comments that she had heard from those concerned about the social-emotional impact of masking on students, Curtis said: “Our next steps in relation to masking is to ensure that we have a social-emotional support structure in place for students that will make the choice to continue to wear a mask for several reasons, and may have a high level of anxiety with students surrounding them that don’t.”

Curtis said he has been preparing for the decision by talking over the past week with school adjustment counselors, principals, vice principals, deans, the city’s Board of Health and through polling district families on their opinions on masking.

Last week, the Baker administration announced that it would leave masking decisions up to individual school districts. That policy change has left school committees and superintendents across the state in the position of becoming the public face of the masking debate.

The superintendent said that other districts in Berkshire County are having more difficulty making timely decisions around masking because of the process districts have enacted around changing mask policies.

“My colleagues around the county are facing some issues due to scheduling of subcommittee or full committee meetings, which is causing some issues,” Curtis said.

In May, the Pittsfield School Committee amended its policy on masking so that the decision to mask and unmask falls solely with Curtis.

Members of the School Committee’s policy subcommittee reaffirmed their belief that Curtis was the best person to make the call, during a meeting Wednesday night.

“If it’s a question of who has the expertise to make the decision — and I’m not talking about expertise as an epidemiologist — but who has access to the best information on short notice when something arises,” Cameron said, “it would be the central office and, specifically, the superintendent.”

When it comes to data to consider, there are several sources for Curtis to review. Since the start of the school year, district officials have been tracking student and staff cases reported by the Pittsfield Health Department, caught in district testing programs and those self-reported to the district.

The data is recorded in a public coronavirus case report. Though the frequency of the updates to this report have decreased noticeably over the past two months, the provided case counts have continued to show a downward trend. Case counts during the past week have returned to levels not seen since October.

Low case counts have come only after more than one-fourth of district students reported a coronavirus case this year. The highest rates have been in city elementary schools, where students account for about 48 percent of the total student population but 54 percent of all reported student cases.

There also is vaccination data for Curtis to consider.

The superintendent said Feb. 10 that the district began calculating school vaccination rates after the announcement of the end of the state mask mandate. He wrote in an email to The Eagle that “preliminary viewing indicates no school is even close to 80%” — the vaccination rate the Massachusetts Department of Elementary and Secondary Education had previously set as the benchmark for schools to opt out of masking requirements.