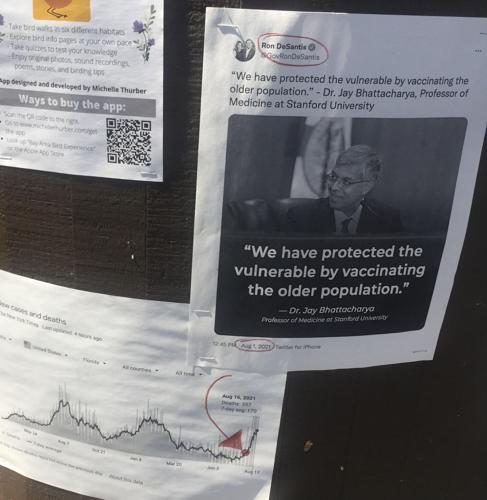 Dr. Jay Battacharya's image on posters at Stanford University where he is a professor of medicine. The poster campaign has been part of a larger attempt to keep him quiet, he said.

GREAT BARRINGTON — They’ve been vilified this past year over their stance on the COVID-19 lockdowns. Now, one of the three scientists who drafted the Great Barrington Declaration says he worries for his safety amid a campaign to censor him on the campus where he has worked for 35 years.

“I happen to have spent a couple of decades doing research on infectious disease outbreaks and also in vaccine safety. I don’t see how I could be silent.”

Dr. Jay Bhattacharya, a tenured professor of medicine and an economist at Stanford University, said posters nailed around campus with his photo in a tweet by Florida Gov. Ron DeSantis feel threatening. Despite the ongoing fights about health policy, he says as an epidemiologist he has no choice but to weigh in on public health measures taken in response to a global pandemic.

He and others said, in the declaration, that the best overall way to protect everyone, before the advent of vaccines, was to focus protection on the old and medically compromised, while allowing the young and healthy to continue living life normally.

They argued that this policy would more readily lead to “herd immunity” that would ultimately protect the old and infirm. Herd immunity occurs when a certain percentage of a population has acquired the antibodies to fight disease.

Critics said the policy would, in effect, sacrifice people, including low-income workers who needed to continue at jobs that brought them into contact with people, exposing them to infection. They also pointed out that the policy would risk exposing people in high-risk groups, including those with diabetes and obesity, who live in multigenerational families unable to avoid interaction.

Another declaration scientist said while he does not worry for his safety, he continues to face denunciation for speaking out about matters that are the focus of his work.

“Sometimes I wish I were a chemist and then I could just be quiet,” said Dr. Martin Kulldorff, a professor of medicine at Harvard Medical School, as well as a biostatistician and epidemiologist at the Brigham and Women’s Hospital. “But I happen to have spent a couple of decades doing research on infectious disease outbreaks and also in vaccine safety. I don’t see how I could be silent.”

On the one-year anniversary of the declaration, some of those involved in the public health proposal spoke to The Eagle about their intentions, the fallout, pandemic data and the idea of “focused protection.”

They say what they proposed was a long-accepted public health concept designed to both protect the old and compromised while allowing the young and healthy to live normally. Their idea was to avoid the collateral health damage of the lockdowns, which would hit the poor the hardest.

The scientists drafted the declaration at the American Institute for Economic Research, a think tank off Division Street in Great Barrington. It has received more than 860,000 signatures from around the world, of which nearly 15,000 of those are from scientists and more than 44,000 are from medical practitioners.

The concept was denounced by other researchers worldwide as both callous and impractical. Great Barrington town officials quickly tried to distance the town — one wanted the policy renamed, while residents joined the chorus. The situation soon dropped the declaration scientists into a political cauldron, as some politicians seized on the proposal, while others rejected it as far-right heartlessness.

In Great Barrington, scientists declare policy for living with COVID: Shield only the most vulnerable for herd immunity

GREAT BARRINGTON — Three top scientists say there’s another public health crisis underway, and it is the poor and working class who suffer the…

The scientists say that when they traveled to the Berkshires six months after the lockdowns and began to discuss the crisis, they were upholding a well-established public health practice of “focused protection.”

“So there’s nothing new or innovative in the declaration,” said Dr. Kulldorff, who is a member of the scientific advisory committees to the Food and Drug Administration and the Centers for Disease Control and Prevention. “What we saw was that, because people thought that these lockdowns and the masks and so on would protect everybody, [authorities] did not do the focused protection.”

The resulting deaths bear this out, he added. Kulldorff said there are two underpinnings to the declaration that data now supports: The “thousand-fold difference in mortality” between old and young, and what he says is strong and lasting natural immunity after infection.

“One of the stunning things through this pandemic is the questioning of natural immunity after having COVID,” Kulldorff said. “We didn’t know this a year ago, but now we know that the immunity from having COVID is stronger than after the vaccine.”

Kulldorff is, in part, referring to health officials who appear to be dancing around the immunity issue post-infection, concerned that it will undermine inoculation efforts. The results of a large Israeli study showing robust natural immunity, for instance, demonstrates this.

Dr. Bhattacharya, who is also a professor of health policy and specializes in the economics of health care, moved last month to the school’s newly established Department of Health Policy. It was DeSantis’ Aug. 1 tweet with Bhattacharya’s photo that was nailed to campus kiosks, in which Bhattacharya is quoted about focused protection and linked to death counts in Florida. DeSantis has sown derision for his support of declaration-style COVID policy and opposition to vaccine and mask mandates.

The poster campaign was initially a response to comments Bhattacharya had made about the lack of “high quality” evidence that masks stop the spread of infection, which also led to a faculty petition to silence public health pronouncements contrary to university policy — one that does not overtly target him. But the posters felt threatening, and it took him several days to return to his office.

“It felt like targeted harassment,” he said. “The poster campaign really shook me.”

In April, Bhattacharya was further linked to DeSantis when he participated in the governor’s April roundtable about “Big Tech censorship and the COVID-19 pandemic.” Kulldorff also participated, as well as Scott Atlas, a fellow at the Hoover Institution at Stanford who had resigned as former President Donald Trump’s coronavirus advisor.

Bhattacharya says he has never registered for a political party and is obligated as a public health scientist to consult with anyone, regardless of politics. “I’d happily speak with any politician on any side of the issue — I don’t limit my advice,” he said.

The campaign to censure him marks a dangerous decline in discourse, particularly at a university, he said. Bhattacharya says he feels a responsibility to speak what he believes is the truth, given his tenure and job protection.

“I think many people who signed the Great Barrington Declaration have lost their jobs or have been silenced or lost opportunities for grants and collaborations,” he said.

“It was an earnest attempt to calmly explain basic principles of public health and cell biology, because everyone was running around confused — governments in particular,” he said. “It was not designed to be political.”

Jeffrey Tucker, founder of the Brownstone Institute for Social and Economic Research

And he has not gone unscathed. “I’ve had to revisit and rethink every aspect of my life, and there have been some very tough periods,” he said.

“This is our crucible,” Bhattacharya once said to Jeffrey Tucker, a prominent libertarian and author who nurtured the declaration scientists. Tucker, who left AIER, founded the Brownstone Institute for Social and Economic Research in May as a “safe harbor” for scientists and others taking risks of censorship and ruin by thinking and speaking outside the mainstream COVID public health policy.

Tucker said that what people in the Berkshires and beyond need to know about the declaration is that those who crafted it did not see it as a radical statement.

“It was an earnest attempt to calmly explain basic principles of public health and cell biology, because everyone was running around confused — governments in particular,” he said. “It was not designed to be political.”

This story has been modified to correct the number of scientists and medical professionals who signed the declaration.