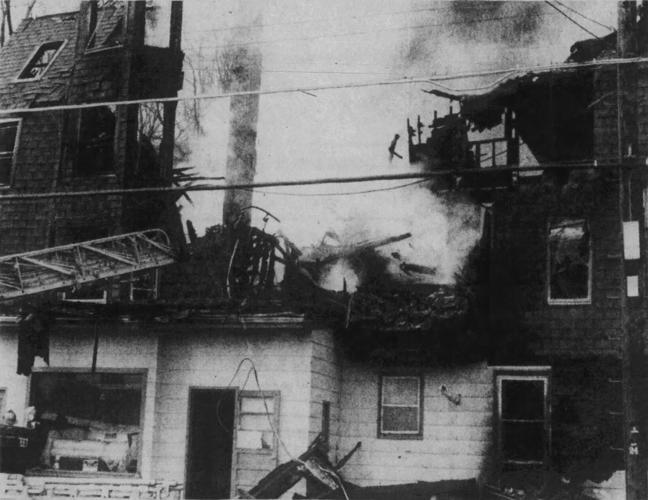 More than two years after this Oct. 27, 1984, fire on State Street in North Adams, William P. Cascone was found guilty of arson and second-degree felony murder. He has been imprisoned for 35 years but seeks a new trial and his release from prison. 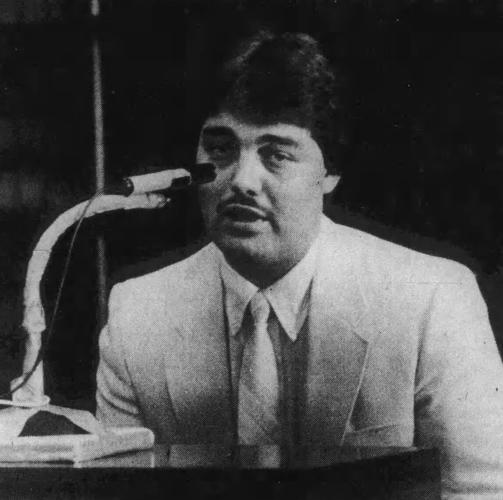 William P. Cascone testifies during his 1987 trial in Berkshire Superior Court. He was convicted of arson and second-degree felony murder. In September, a judge will hear arson experts testify about shortcomings in the initial fire investigation.

Two big questions for a man in prison for arson remained up in the air Wednesday, though answers are coming soon.

Will he be granted a new trial? Will he be released in the meantime?

A judge overseeing the case of William P. Cascone said Wednesday he will decide this week under what conditions he might allow Cascone to be freed.

The Berkshire District Attorney’s Office does not oppose his release, though on Wednesday it added three conditions for Judge Michael K. Callan to consider.

The man convicted in a deadly 1984 North Adams arson has been in prison for 35 years. He wants a new trial

“I expect to get that decision out to you very shortly,” Callan told attorneys during a videoconference Wednesday afternoon. Callan would be acting on a request from Cascone’s attorneys that he grant a stay in the execution of their client’s prison sentence.

Cascone was convicted in 1987 of arson and of three counts of second-degree felony murder and sentenced to three concurrent life sentences on the murder counts.

He watched Wednesday’s short status hearing by video from MCI-Norfolk, the medium security facility where he has been imprisoned since 1995.

Attorneys with the Boston College Innocence Program are asking that Cascone be allowed to live with his mother in the Franklin County town of Rowe.

The next court session on Cascone’s legal future comes up Sept. 9, when Callan will hold a hearing in Hampden Superior Court and take testimony from arson experts. “I want a public hearing with respect to these issues,” Callan said. “I find it tremendously helpful to hear from live witnesses.”

Both Cascone’s pro bono legal team and the Berkshire District Attorney’s Office agree that evidence presented at the man’s 1987 trial was based on a now discredited understanding of fire science.

The Boston College program filed a motion more than a year ago seeking a new trial. Their argument will get its first full airing Sept. 9, when Callan hears from two defense experts – and possibly one for the prosecution.

Jennifer K. Zalnasky, chief of appeals for the Berkshire DA’s office, said an expert it retained this summer has been delayed in producing a report, due to a family member’s injury in a hit-and-run accident. Zalnasky said she hopes to get that expert’s report to the BC team by Aug. 26, ahead of the Sept. 9 hearing in Springfield.

David J. Grimaldi of the Boston College program said the defense may only seek to present testimony from its two arson experts. “That may well be, from our vantage point, all the evidence we would need to submit,” he told Callan.

The prosecution’s witness, Wayne Chapdelaine, lives in Toronto. Zalnasky asked if he could join the September hearing by videoconference. Given the Springfield court’s limited access to that technology, Callan said he would start with the defense witnesses.

“Why don’t we go forward with the two witnesses that we have, and if I feel it necessary to hear from the other expert, then we can arrange for a day … to take testimony from that witness,” Callan said.

Zalnasky noted that Chapdelaine has not reviewed the entire case, and the defense team’s experts have done that.

“Which puts him in a bit of a different position,” she told Callan. “But we can address that as soon as I hear from my expert.”

The 1984 fire broke out just before dawn after an all-night party at the apartment. It killed two sisters sleeping in their mother Jeanette Scott’s apartment: Sandra, 4, and Charlene, 3. A teen, Brent “Buddy” Tatro, 16, also died.

On Wednesday, the DA’s office added three conditions of release to those proposed by Cascone’s attorneys.

The office requests that he face a curfew from 9 p.m. to 6 a.m., that he have no contact with families of the 1984 fire victims and that he only be allowed to visit one address in the town of Charlemont, that of his brother.

The defense proposed five conditions: that Cascone live with his mother, report weekly to probation by telephone and monthly in person, have no contact with any potential trial witnesses, remain in Massachusetts and not apply for a passport or travel visa.

William Cascone is free today. His lawyers’ next goal: vindication of his ‘wrongful imprisonment’

A man from western Massachusetts imprisoned for nearly 35 years left state custody late Thursday. William P. Cascone walked out of MCI-Norfolk in time to savor the evening air and twilight – and to pose for a photo with a legal team that has worked for five years to prove he did not get a fair trial in 1987, when he was convicted of setting a fire that killed three young people in North Adams.