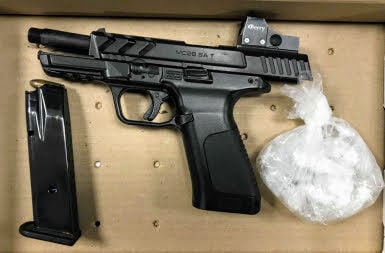 Pittsfield police say that on Monday, they took this 9mm handgun, along with a substance believed to be crack cocaine, from a man arrested outside the West Street Big Y. 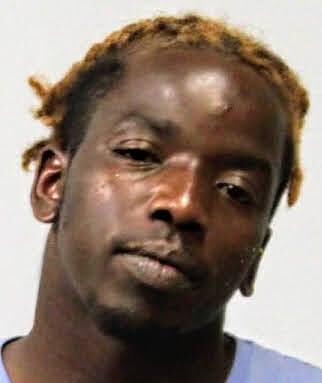 Pittsfield Police charged Myles Handy with a variety of weapons charges Monday after they said he was found to be in possession of a 9mm handgun without a license to carry.

PITTSFIELD — Pittsfield police say they arrested a 27-year-old man Monday after an officer on patrol spotted what he thought was a concealed handgun.

That led the officer to stop the man, Myles Handy, and ask that he show proof that he held a license to carry a firearm.

Handy refused to comply, police say. Though Handy walked away, Officer Ansy Jumeau was able to stop him and recover a loaded 9mm firearm, police say.

The gun was in Handy’s waistband, police say.

After determining Handy did not have a license to carry, he was arrested and now faces firearms and drug charges.

Police said the incident began at 3:30 p.m. Monday in the parking lot at the Big Y at 200 West St. Jumeau reportedly saw Handy with what appeared to be a firearm concealed beneath his T-shirt.

Handy refused to stop as the officer approached, police said.

“​​At one point, Mr. Handy’s shirt lifted, thus giving the officer visual confirmation that he possessed a non-holstered firearm,” according to a statement Tuesday from the police department.

Police say they recovered “several” baggies with what appeared to be crack cocaine, both in the cruiser in which Handy had been placed and from him when he was being booked.