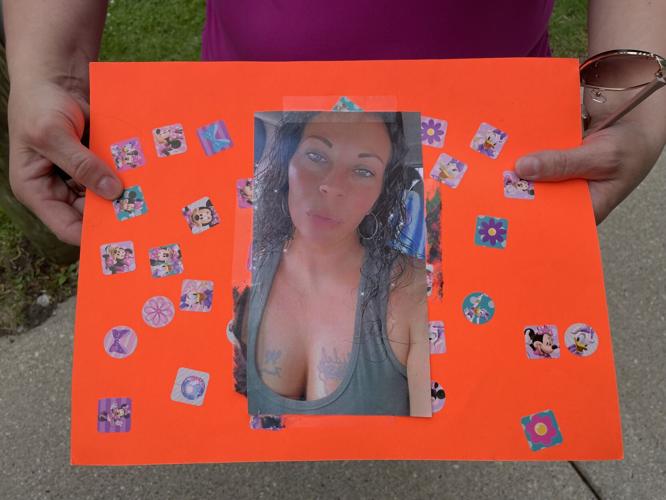 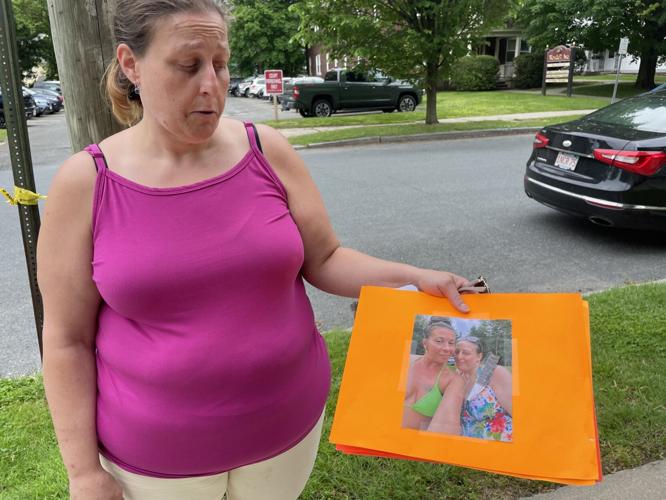 Tara Vallieres, Jillian Tatro's best friend, holds a photo of the two of them outside Central Berkshire District Court following Luis Rosado's arraignment on a charge of murder. 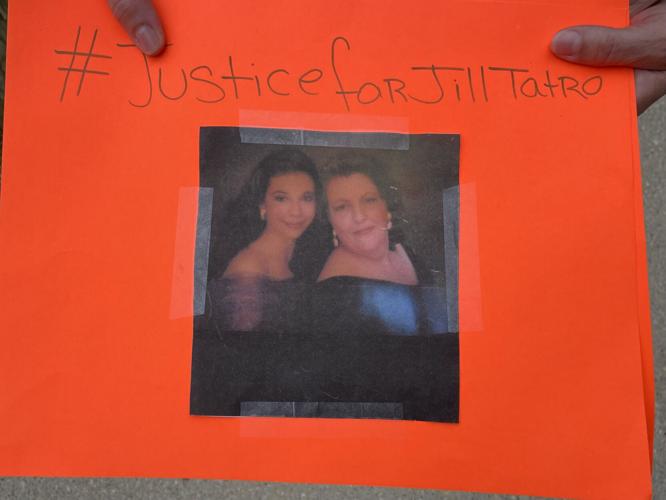 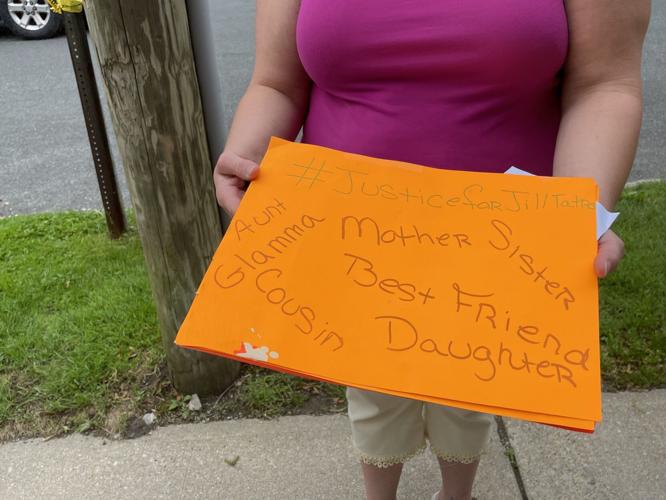 PITTSFIELD — A witness overheard Luis Rosado tell his new wife, Jillian Tatro Rosado, that if she ever tried to leave him, he would kill her, the Berkshire district attorney says.

Jillian Tatro did try to leave, and was attempting to extract herself from the relationship when Rosado allegedly stabbed her to death in her second-floor apartment on Charles Street in North Adams, friends told The Eagle on Thursday.

Her husband of five months now faces a charge of murder.

"This was just tragic, nobody deserves this," said Tara Vallieres, who said she was among Tatro's best friends, before Rosado's arraignment. "We wanted to make sure that Jill was supported. She needed a voice." Family asked that she be referred to by her maiden name.

Another of Tatro's close friends, Kristen McLain, said Jillian texted her on May 27, the day before she died. They said they had seen her recently with a black eye, which she tried to cover with makeup.

In messages reviewed by The Eagle, Tatro expressed to McLain that she had reached her breaking point in the relationship with Rosado and was "having him removed" from her apartment.

Berkshire District Attorney Andrea Harrington said Thursday that Tatro and Rosado, 49, met about six months ago, and were married for about five months.

They were with each other and argued the night before she was killed, when Tatro stopped communicating on her cellphone, Harrington said. The investigation indicates Tatro was killed Saturday night.

"We do know that days before the murder, a witness did overhear Mr. Rosado tell his wife Jillian that he would kill her if she left him," Harrington said at a noon press conference.

A witness who Harrington declined to identify called 911 at 7:54 p.m. Sunday, summoning North Adams police and Northern Berkshire EMS to 46 Charles St. Tatro was found dead in the apartment, and the cause of death was multiple stab wounds.

Rosado was arrested on a warrant at about 8:30 a.m. Thursday. Harrington said authorities found him at a house on Fenn Street in Pittsfield.

Harrington declined to say what Rosado is thought to have been doing over the five days since he allegedly killed his wife in North Adams on Saturday, and when he was arrested in Pittsfield Thursday.

"This is an ongoing investigation. There are still witnesses that the investigators expect to be talking to. And therefore we do have to be somewhat guarded about facts that we release to the public," she said.

Court documents related to the murder case have been sealed.

Vallieres went to Rosado's arraignment at Central Berkshire District Court along with other friends and family members of Tatro's. She held handmade signs that read #JusticeforJillTatro.

On one were written all the things Vallieres said her friend was: "Aunt," "Mother," "Sister," "Best Friend," "Daughter," "Cousin" and "Glamma" — the glamorous name she was to her grandchild.

Those who knew Tatro remembered her Thursday as someone who loved her family, her two children her pet dogs, bonfires and being around friends and in nature. They say she always saw the good in people.

Rosado pleaded not guilty to a single count of murder.

It was only his most recent appearance in Berkshires courts, where he is well-known to staff.

In October 2020, Rosado pleaded guilty to multiple counts of assault and battery on a household member, a count of strangulation, larceny from a person and violating a protection order.

The Berkshire DA's office said in a statement at the time that "Rosado repeatedly punched and strangled the victim," who wasn't Jillian Tatro, and who ultimately chose not to testify against him.

Rosado received a sentence of one year in jail.

Not long after Rosado got out of jail for that domestic violence conviction, he met Tatro, according to McLean and Vallieres, whose children called Tatro "Auntie."

They weren't sure how the two met, but suddenly, he was in their best friend's life. "We're best friends and we don't know, all of the sudden he was just there," Vallieres said.

"We're best friends and we don't know, all the sudden he was just there,"

McLean quickly saw problems in the relationship. While the friends were on a vacation together on Cape Cod, McLean said Rosado called her repeatedly, and threatened to come pick her up and cut the trip short.

"I don't think she could get away," McLean said.

Tatro sought an abuse prevention order against her husband in March. That same month, Rosado told police he was on probation for domestic violence.

Rosado had received 18 months probation following his year jail term in the 2020 domestic violence case. If he had been found to have violated the terms of probation by being charged with another offense, he would have gone back to jail for more than two years.

Rosado on March 11 claimed to state troopers who responded to a report of domestic violence that his wife had hit him. Tatro denied striking him. She told the troopers, Kyle Kemp and his backup, Jalen Fabregas, that Rosado was on drugs and that she had not wanted to "take him back."

According to Kemp's report, Rosado told Kemp that "he wanted to choke her [Jillian] out but did not because he was already on probation for domestic violence."

The trooper said Rosado had a cut and bruise on his face. But Jillian told the trooper that Rosado had cut himself shaving. Kemp's report said that Rosado ultimately admitted it was a shaving injury, and not "related to [Jillian] hitting him."

Kemp nonetheless moved to arrest Tatro. While standing in the breezeway of her family's Cheshire home, Kemp informed Tatro that she was under arrest, he wrote.  Kemp said Tatro didn't follow his command to open the door, and said she wanted to call her lawyer. According to the report, Kemp threatened to kick the door in if she didn't open up.

Then, Jillian told the trooper to wait a minute while she got her shoes, and Kemp wrote that he could see her appear to go grab some footwear. Kemp said he saw two "large dogs" in the home, as well as Jillian's son and an elderly woman pushing a walker.

Kemp claimed in the report that Jillian didn't come out after he asked, so he kicked open the door and arrested her.

Kemp charged Jillian with assault on a family or household member and resisting arrest, according to court documents. She was ordered to have no contact with Rosado and was released after posting $5,000 bail.

Her defense lawyer, Joshua Hochberg, moved to dismiss the resisting arrest charge on April 20 for lack of probable cause.

About three weeks earlier, on Feb. 21, Rosado called police and reported Tatro for allegedly striking him "three or four" times in the face during an argument in a car on Route 8 in Cheshire. State police Trooper Scott Mason said Rosado had a "red mark" on the right side of his face and "three small scratches." Police arrested Tatro and charged her with assault on a family member.

Harrington told The Eagle that the prosecutor involved in the cases where Tatro was named as the defendant "immediately recognized" issues with the cases and raised concerns about whether she was the "actual aggressor."

She said the cases were referred to the DA office's Domestic Violence High Risk Team "in recognition that we believe she was the victim of domestic violence."

Asked why prosecutors hadn't dropped the charges against Tatro given the belief she was the victim, Harrington said the cases were still relatively new and that prosecutors were in the process of discussing the best way to move forward with her defense lawyer, Hochberg.

"There was no intention on the part of the district attorney's office to follow through on seeking convictions of Ms. Rosado in those cases," she said.

Earlier in the day, at the press conference, Harrington spoke generally about the issue of how those who commit domestic violence may use the legal system.

"Perpetrators of domestic violence can be very manipulative, and very savvy about manipulating legal systems in order to carry on with their abuse," she said. "And sometimes that does include seeking criminal charges against the victim."

McLain said she had plans to go camping with Tatro last weekend. They were going to swim, something McLain said Jillian loved to do. In the last text message McLain received from her late friend, Tatro asked whether a tarp she had was big enough for her tent. Then, Tatro stopped communicating, and McLain sent a series of worried messages inquiring whether her friend was OK.

Tatro loved the outdoors, those who knew her said, and adored her dogs and her family. She was an adept hunter, liked to ride horses and was the caretaker for her mother in Cheshire.

"She took care of her mother there, who she loves dearly. And her mother loves her dearly," said Carolyn Rouleau, the mother of Jillian's nephew and her former sister-in-law.

"She was a Tatro through and through," Rouleau said.

Rosado was represented for the arraignment by defense lawyer Ryan Smith, who told Judge Jennifer Tyne that Committee for Public Counsel Services was still trying to find a lawyer who could handle the murder case throughout.

Rosado was ordered held without bail, and will appear for his next hearing in Northern Berkshire District Court on June 10, when the matter of who will represent him in court will be clarified.

Though the homicide took place outside the jurisdiction of that court, the hearing happened in Pittsfield because Northern Berkshire District Court didn't have a judge presiding Thursday.

"He doesn't even show any remorse," Vallieres said after the hearing.

A vigil will be held Tuesday outside of North Adams City Hall to honor the memory of Jillian Tatro, who was killed late last month.

Jillian Tatro wanted love and safety. Her mother and sister demand to know why the price was her life

In interviews and statements this week, family and friends provided the first full public accounting of Jillian Tatro's last days and of her brief marriage to a man who she at first believed offered her security. But they allege that Luis Rosado's violence and drug use quickly shattered that sense of safety.

An arraignment for a North Adams man accused of killing his wife has been delayed until later this month after a COVID outbreak at the jail.

PITTSFIELD — The prosecution of a man accused of murdering his wife in North Adams moved a step forward Wednesday, when Luis Rosado was arraig…