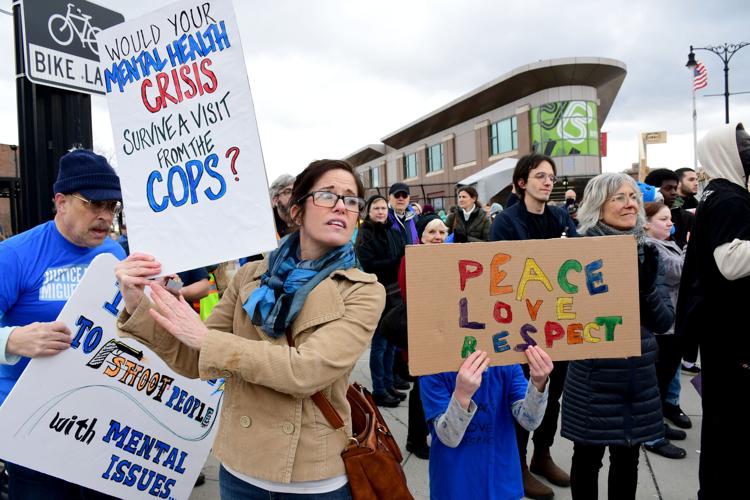 Supporters hold signs on North Street in Pittsfield on Sunday as part of a rally in support of Miguel Estrella, who was shot and killed by city police March 25. Berkshire District Attorney Andrea Harrington said Tuesday that she has asked agencies to "prioritize" work on an investigation into the circumstances of the shooting. 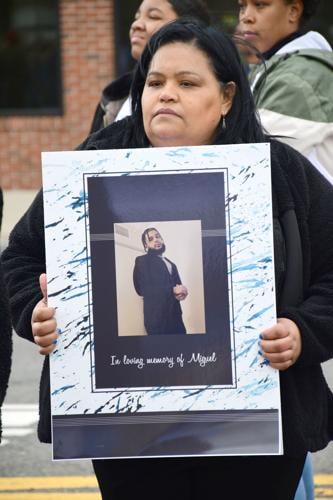 Miguel Estrella’s mother, Marisol Estrella, holds up a picture of her late son on North Street in Pittsfield during a march and rally Sunday.

PITTSFIELD — Berkshire District Attorney Andrea Harrington said Tuesday she has asked that an investigation into the fatal use of force by Pittsfield police be made a priority by the people conducting it, many of whom are overseen by her office.

“I recognize the community’s urgent need for details, and I’ve requested that the involved agencies prioritize this investigation,” Harrington said in a statement released by her office. “Typically, these types of investigations take four to six months to complete but I am committed to significantly reducing that timeframe without compromising accuracy, thoroughness, or objectivity.”

Miguel Estrella, 22, was shot and killed by a city police officer who responded to a second emergency call at Estrella’s Onota Street apartment building on March 25. Estrella had declined medical assistance during the first call, only minutes before, after intentionally cutting himself with a knife during an apparent mental health crisis. A 911 caller then summoned help again, requesting that Estrella, who family members say suffered from periodic bouts of depression, be transported for care.

District Attorney Andrea Harrington has pledged to release a report and underlying documentation including witness interviews and video collected in connection with her office's investigation into the fatal shooting of Miguel Estrella by an unidentified Pittsfield police officer.

An officer shot Estrella after attempts failed to disable him with Tasers, according to a statement the following day from Pittsfield police. Estrella was holding a knife, according to eyewitnesses, and did not heed calls from police to disarm himself. Two unidentified officers were placed on administrative leave after the shooting.

An investigation into the fatal use of force is being handled by Harrington’s office.

The District Attorney’s Office also pledged Tuesday to provide the first briefing on the probe’s finding to members of the Estrella family.

“Once the investigation is complete and all evidence is shared with the Estrella family, the Berkshire District Attorney’s Office will make the findings available to the community and the Pittsfield Police Department,” the office said.

As of Tuesday, the State Police Detective Unit that works with the DA’s office has finished interviews with five civilian witnesses, along with five EMTs, and has wrapped up interviews with the Pittsfield police officers involved, according to Harrington’s office.

Ahead, state police plan to interview other civilian witnesses who have been identified, the office said. Other possible witnesses to the events at 279 Onota St. in Pittsfield are asked to contact the Berkshire Detective Unit at 413-499-1112.

In the course of their investigation to date, state police have gathered medical records, surveillance video, social media posts, emergency radio transmissions and Pittsfield police reports, among other evidence, the DA’s office said.

It said that the State Police Crime Lab will provide ballistic reports on the guns used by police and will examine the Tasers that officers deployed that night. The office said it is waiting for the Office of the Chief Medical Examiner to provide a “full” autopsy report.

Harrington said Tuesday she wants all facts revealed by the probe to be made public.

“My priority is that all interested parties have confidence in my office’s determination of the facts surrounding the tragic shooting of Mr. Estrella by the Pittsfield Police Department,” Harrington said.

Family and allies of Miguel Estrella, the man shot by Pittsfield police, call for actions to help people in crisis

Friends and relatives of the Pittsfield man killed by police two weeks ago want the city to improve how it responds to people in a mental health crisis, in part by shifting resources from the Pittsfield Police Department. They are also calling on the department to release the names of the two officers who responded to a second call at the home of Miguel Estrella, when he was shot and killed.

Our Opinion: When will the Pittsfield community have the answers it needs in Estrella shooting?

The Berkshire district attorney this week publicly asked the agencies investigating Miguel Estrella’s death to accelerate that probe. Those ag…

The Pittsfield police investigation into the fatal shooting of Miguel Estrella is expected to be completed by the end of April, when police will share it with the Berkshire District Attorney's office.