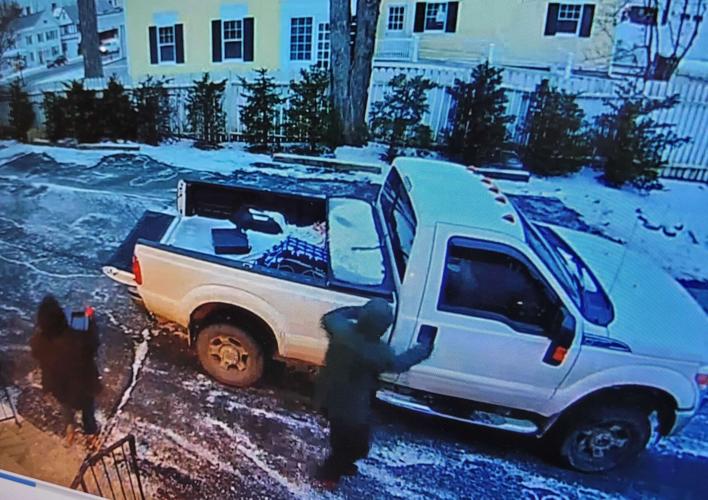 As captured by surveillance video outside the Gateways Inn in Lenox, a suspect is seen loading his pickup truck with the haul, including a safe and cash drawer, from a break-in Thursday morning. 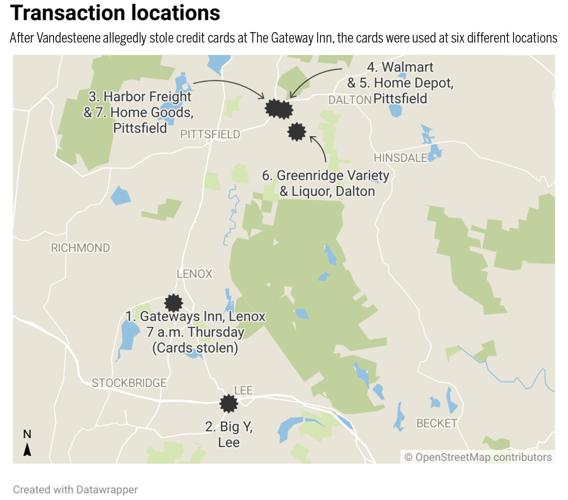 LENOX — A man with a history of burglaries has been arrested in connection with a break-in at the Gateways Inn that yielded about $8,000, including cash, merchandise and stolen credit cards that were later used at businesses in Lee, Pittsfield and Dalton.

Christopher Vandesteene, 40, homeless of Pittsfield, had about $4,000 worth of merchandise purchased from the four stores when he was arrested Friday, according to Lenox Police Chief Stephen O’Brien.

The alleged crime spree began with the break-in about 7 a.m. Thursday at the Gateways on Walker Street, O’Brien said.

There were no guests or employees on hand at the time.

A second suspect, so far unidentified, helped load the safe and cash drawer into a white 2015 Ford pickup truck with a folded tonneau cover, as shown on the indoor/outdoor surveillance video.

On Thursday night, Officer Tyler Bosworth was advised that the stolen credit cards were used for transactions at the Big Y supermarket in Lee, as well as Harbor Freight, Walmart, Home Goods and Home Depot, all in Pittsfield, and Greenridge Variety and Liquor in Dalton. Surveillance video at all the businesses depicted the same suspect identified in the Gateways break-in.

Vandesteene was arrested by Bosworth and Sgt. Michael Smith on Friday night after state police from Lee spotted the pickup truck heading north on Pittsfield Road (Route 7/20) before it pulled into a parking lot in a possible evasive maneuver, O’Brien said.

Lenox Police are obtaining search warrants for the truck, which is being held for evidence.

“We’re very confident we’ve made the correct arrest for the Gateways [breaking and entering],” O’Brien stated. “What was very helpful was the amount of camera footage we were able to use from the Gateways and then from the other stores.”

Vandesteene pleaded not guilty in Southern Berkshire District Court on Tuesday to charges of larceny from a building, breaking and entering in the daytime with intent to commit a felony, larceny with a credit card, operating a vehicle with a suspended license and possession of a crack cocaine smoking device.

On May 12, 2021, he was charged with driving with a suspended license, operating under the influence of drugs and possession of a Class A substance and released on personal recognizance. He has four open cases pending before that court.

He was released on personal recognizance, warned not to be charged with any further crimes and is due back in court March 14 for a pretrial status conference on the charges filed by Lenox, according to court documents.

In June 2019, Vandesteene was sentenced to 2 1/2 to 4 years in state prison on a series of drug charges and a string of burglaries, including the theft of four ATMs in Pittsfield, Lenox and Becket.

A Pittsfield man with a record of burglaries has been charged with stealing a safe late last month from Central Berkshire District Court.