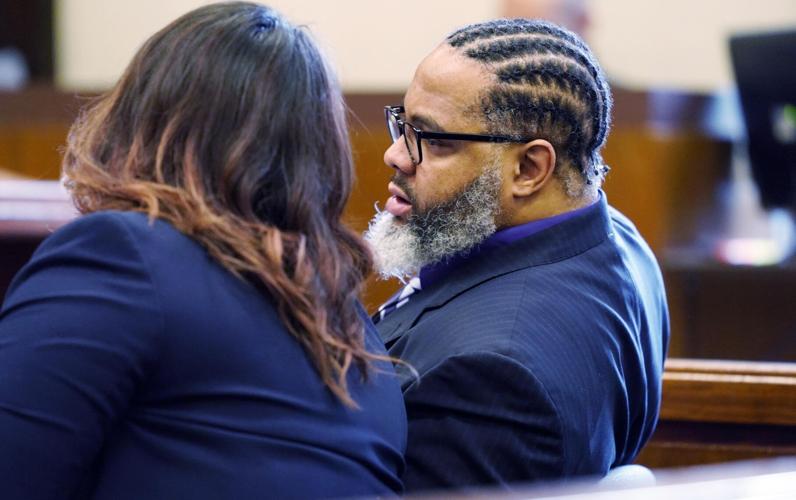 J.C Chadwell sits in Berkshire Superior Court on charges related to murder and firearms charges in the July 4 shooting death of Paul Henry in 2017. 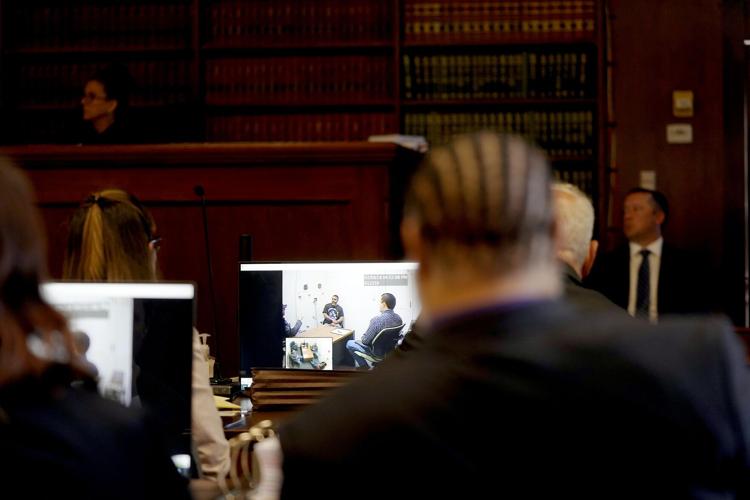 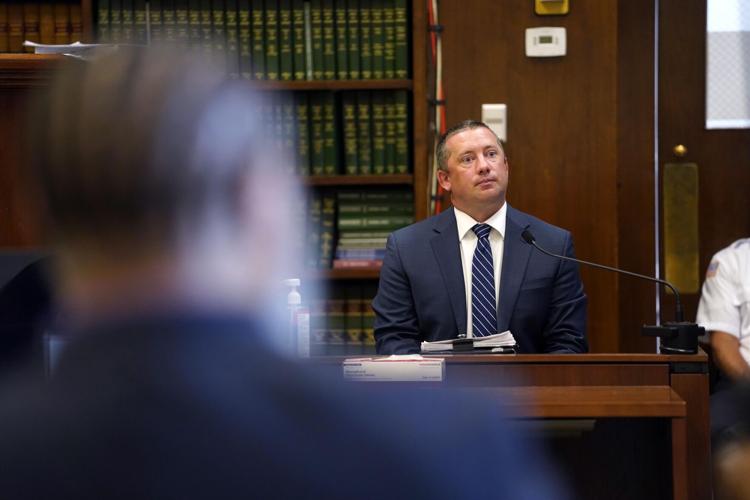 PITTSFIELD — A judge has narrowed the scope of what J.C. Chadwell may tell jurors when he takes the stand Tuesday while on trial for the 2017 killing of Paul Henry.

Monday, on the second day of testimony, the prosecution played recordings of a pair of interviews Chadwell gave the police on Feb. 9 and Feb. 11 in 2018.

The presentation showed the defendant denying that he’d shot Henry. Then, two days later, it showed him admitting that he had pulled the trigger.

Chadwell, 43, participated in three interviews with Pittsfield police officials. The first was in July 2017, after which Chadwell was released while police continued their investigation. Chadwell was arrested on a warrant charging him with murder on Feb. 9, 2018.

In the video recorded Feb. 9, 2018, Chadwell denied shooting Henry, repeatedly telling investigators over the 57-minute recording that he had left the block party before the fatal incident, and gone to New York for work.

Detective Michael Murphy testified that he left the station after the questioning ended and didn’t think he’d be conducting another interview with Chadwell. But a few days later, Murphy said he received a phone call from Officer Kipp Steinman, who told him Chadwell wanted to talk.

Murphy participated in the third interview with Chadwell on Feb. 11, 2018. A roughly one-hour recording was generated of that interview. The jury heard two-thirds of it before the day’s proceedings wrapped up at lunch hour Monday.

During the interview, Chadwell appeared to seek an assurance from investigators that his sister would be released from custody on bail before offering his statement.

A defense motion to suppress statements in this third interview based on how officers offered to reduce bail for his sister, after a judge in 2019 ruled that Chadwell gave the statement voluntarily. His sister had been arrested for allegedly misleading investigators about his whereabouts the evening of the shooting.

Later on in the Feb. 11, 2018 interview, Chadwell said his sister hadn’t lied to the police, and instead had been operating with the information Chadwell had given to her.

Then, Chadwell said that he was intoxicated at the July 4 party. At some point, a man he identified by name approached him and told him that “that dude” was there, and was going to kill him. That was an apparent reference to Henry.

Chadwell told police he asked the man what he was talking about. The man told him to turn around, and when Chadwell did, he saw Henry about five feet away from him, holding a large bottle of E&J brandy over his head. Chadwell said he feared for his life.

“I thought he was going to kill me,” said Chadwell.

According to the recording, Chadwell said he shot Henry in self-defense, then ran away from the scene.

Chadwell is set to testify in his defense Tuesday, after the prosecution rests its case.

In a theory previewed by defense lawyer Sean Smith during his opening statement Friday, Chadwell is expected to testify that it was not he who pulled the trigger — it was the named third party whom Chadwell, in the Feb. 11, 2018 interview, told police had warned him Henry was coming up behind him with the intent to kill.

The defense has put forward a theory that the man shot Henry in defense of himself and Chadwell.

During his opening statement, Smith said Chadwell falsely confessed to the shooting to secure the release of his sister from custody, and because he was not going to “turn on” the man. In a court filing, the defense claimed the man was an associate of the Latin Kings and supplied guns to that gang.

The judge ruled that Chadwell cannot, however, testify about the man’s history with allegedly procuring and using guns, his criminal past, present charges and previous run-ins with the police, or that Chadwell feared reprisal by the man.

Chadwell wanted to testify that the man was being sought by federal authorities because he “is a gun runner supplying the Latin Kings with firearms used to murder their enemies and in furtherance of their criminal enterprise,” the judge wrote. Mulqueen ruled the information was inadmissible because it did not tend to show the man had “motive, intent, and opportunity to shoot Henry.”

Also on Monday, a neighbor who lived near where the shooting occurred testified he was home with his girlfriend in his second-floor apartment when he heard two men arguing outside for about five minutes. Keith Martin said he heard a loud bang, prompting him to look out of a window.

He said one man who was arguing dropped to the ground, and the other got into the back of a vehicle, which Martin said started running over Henry. During direct questioning by Special Assistant District Attorney Brett Vottero, Martin said he heard someone say, “Stop, stop, that’s enough,” before the car pulled away.

Another witness for the prosecution who was 19 at the time of the shooting said she had asked Henry to procure for her either cocaine or acid. She testified that she drove Henry to the block party.

She said when they arrived there were several hundred people present. Henry walked into the crowd. Then, she said she agreed to give a drunk man a ride home.

When she returned about 15 minutes later, Henry had been shot. She said she remained at the scene and spoke with the police.

Both the prosecution and the defense are expected to wrap up their cases Tuesday, when the jury is set to receive instructions on the law and then break for deliberations.

Chadwell takes stand in his own defense, says another man shot Paul Henry

Taking the stand in his own defense, J.C. Chadwell claimed Tuesday that police made false promises that in turn prompted him to confess to a fatal shooting he now says did not commit. The case is now with the 12-person jury.

J.C. Chadwell walked out of Berkshire Superior Court on Wednesday a free man after a jury acquitted him of charges that he had shot and killed Paul Henry in 2017.