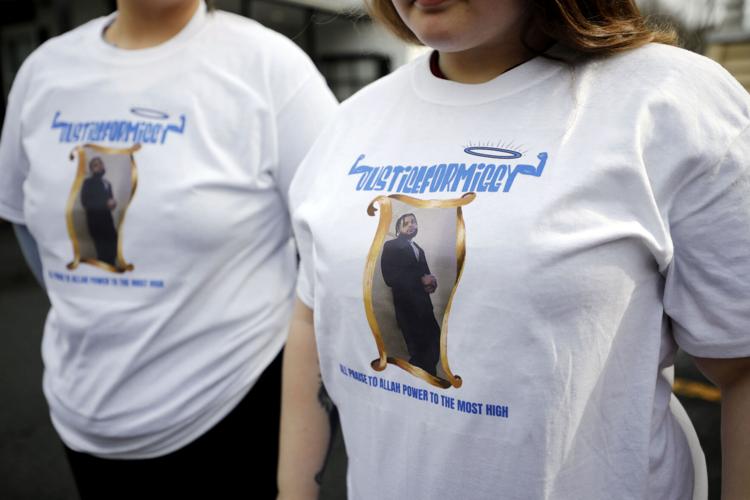 During calling hours last week outside of Devanny-Condron Funeral Home in Pittsfield, two friends of Miguel Estrella from high school wear shirts in his honor, the proceeds from which will go to Estrella’s family, the pair said. Estrella, 22, was killed by police March 25 outside of his home on Onota Street in an incident which many community members question merited the use of deadly force. 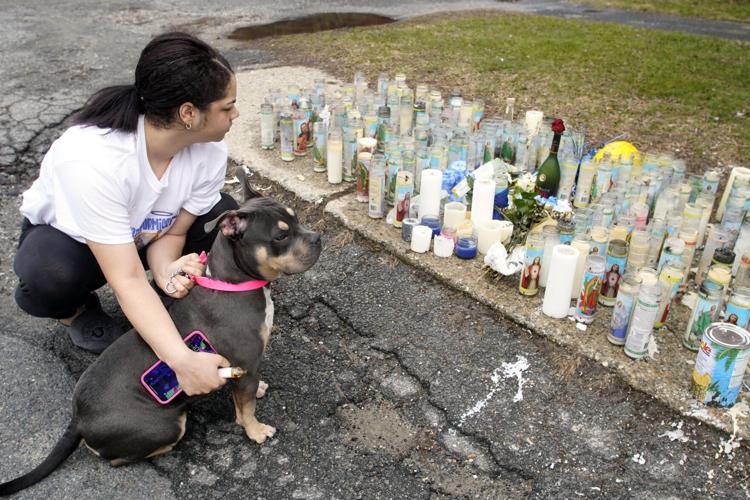 Tayshia Hoisington visits a memorial for Miguel Estrella outside his 279 Onota St. apartment, accompanied by  Estrella’s dog, Chanel, a mixed terrier puppy. Estrella was shot by police outside the apartment March 25 while holding a knife. Hoisington is the sister of Estrella's girlfriend, Daneya Falwell. 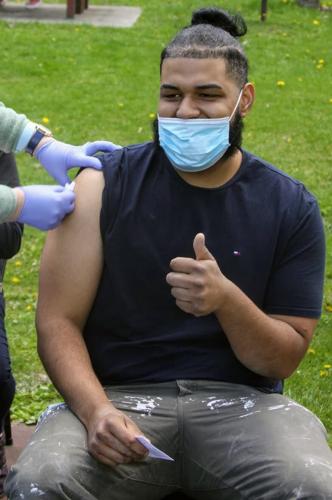 Miguel Estrella sits for a COVID-19 vaccination. A march and rally in his honor this Sunday seeks “to honor his memory and demand answers from the police department as well as local elected officials.”

PITTSFIELD — Friends and relatives of the Pittsfield man killed by police two weeks ago want the city to improve how it responds to people in a mental health crisis, in part by shifting resources from the Pittsfield Police Department.

They are also calling on the department to release the names of the two officers who made a second trip to the home of Miguel Estrella, 22. During that call, a little after 10 p.m., an officer shot Estrella. Authorities say he was holding a knife and did not heed police requests.

On Sunday afternoon, members of Estrella’s family will be joined by local supporters for a march through downtown Pittsfield, starting at 4 p.m., that will pass City Hall and the office of the district attorney and end with a Park Square rally. The events seek “to honor his memory and demand answers from the police department as well as local elected officials,” organizers say.

Authorities say Estrella, who was in obvious distress and had been cutting himself, advanced on police. People at the scene of the shooting, at 279 Onota St., have questioned that account.

Police use of deadly force is being investigated by the Berkshire District Attorney’s Office and the Berkshire State Police Detective Unit.

Estrella’s mother, Marisol, and sister, Elina, will speak Sunday when the procession reaches Park Square, according to organizers.

“The goal of this rally is to remember Miguel, show support for his family, and demand answers,” one event organizer, Dana Rasso, said in a statement Thursday. “The police and the DA’s office have rebuffed demands for clarity or transparency regarding Miguel’s extrajudicial murder. The mayor’s office has offered some words of sympathy. Few, if any, local elected officials have spoken out publicly on this senseless tragedy.”

Rally organizers are also asking the city to create a crisis unit apart from the police department that would be staffed around the clock and respond to people in crisis.

Tyer said in an interview Thursday that she too wants to find new approaches to helping people in distress. Achieving that, in her view, entails more than what city government alone can provide.

“I share this desire to find better ways to care for the people in our community who are struggling in a variety of ways,” she said. “We cannot do it by ourselves. We cannot go it alone. We’re going to need community partners to be better at this.”

On the night he died, Estrella had reportedly declined to be transported to be treated for lacerations he had inflicted on himself when an ambulance and police first responded. When officers returned soon after to Estrella’s home, outside an apartment building, the 911 caller had requested that he receive mental health care, saying “he needs to be taken to the hospital,” according to the DA’s office.

Pittsfield’s police chief says a mental health crisis co-responder had just finished a shift that Friday. Police Chief Michael Wynn has said that given how rapidly the confrontation escalated, it is unlikely that a co-responder would have arrived in time to be a factor.

The two officers who responded to the 10:10 p.m. 911 call attempted to disable Estrella by using Tasers, without success. The officers are on administrative leave. The department has not released their names.

Last week, Berkshire District Attorney Andrea Harrington said her office is performing a “very thorough investigation” into the shooting. She pledged to make public the eventual investigative report, as well as documentation including witness interviews and video.

On Sunday, people who wish to attend the march and vigil are asked to meet at the southwest corner of Columbus Avenue and North Street in downtown Pittsfield.

The group plans to proceed south on North Street and go to City Hall and the police department. It will then swing by the outside of the district attorney’s office at North and West streets before ending at Park Square.

Central Berkshire Habitat for Humanity, where Estrella had trained and worked, is a cosponsor of Sunday’s event. Other cosponsors are Invest in Pittsfield, the Manos Unidas Cooperative, the Berkshire County branch of the NAACP, Roots & Dreams and Mustard Seeds Inc., the Wildflower Alliance, Berkshires DSA and BRIDGE.

Anyone with information about the March 25 shooting is asked to contact the detective unit at 413-499-1112.

Friends and co-workers of Miguel Estrella, 22, are mourning his loss in a fatal Pittsfield police shooting Friday — and questioning why officers resorted to lethal force.

As a country, we continue the necessary and difficult conversation on improving policing. As a Berkshire community, that issue has been sadly …