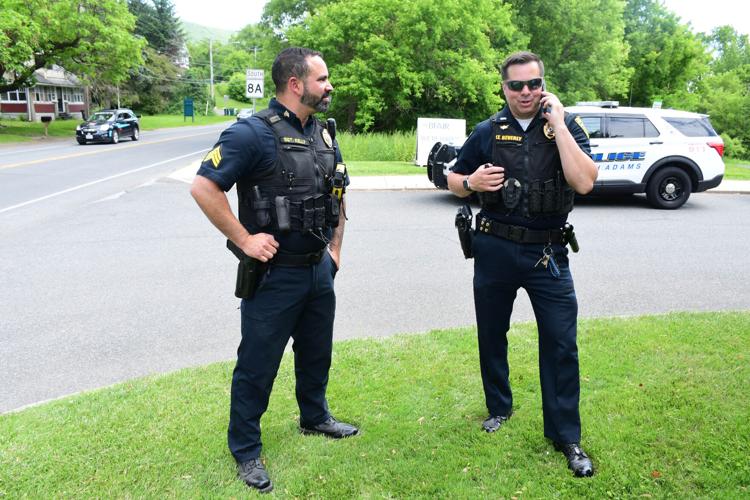 North Adams Police officers Sgt. Preston Kelly and Lt. Anthony Beverly wait Monday at Church and Ashland streets in North Adams for the expected visit by jurors at the scene of the fatal 2018 crash. The bus carrying the jurors was involved in a crash in Pittsfield, prompting a mistrial. 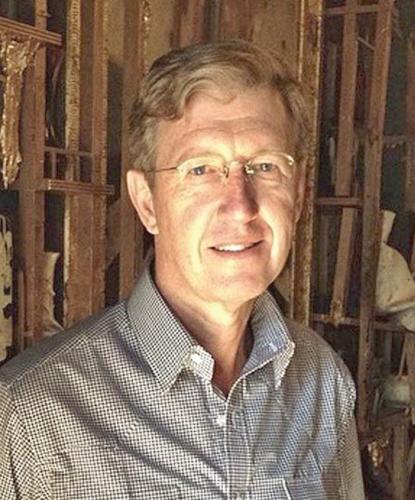 A judge declared a mistrial in the vehicular homicide case against Joseph Thompson, former director of the Massachusetts Museum of Contemporary Art, after a truck crashed Monday afternoon into the bus that was carrying jurors to view the scene of the 2018 collision at the center of the trial.

PITTSFIELD — A bus that was carrying jurors to visit the scene of a fatal 2018 collision was involved in a crash Monday, prompting the judge to declare a mistrial in the case against former Mass MoCA Director Joseph Thompson. Two people suffered injuries that police said were not life threatening.

Thompson, the former longtime director of the Massachusetts Museum of Contemporary Art in North Adams, faces a charge of motor vehicle homicide by negligent operation in the July 20, 2018, crash in which motorcyclist Steven Fortier was killed.

The trial had been slated to begin in January, but was delayed because of a COVID-19 outbreak.

The jurors had been seated to hear the case Monday morning in Central Berkshire District Court, and were loaded into a bus to transport them to the area of Church and Ashland streets in North Adams for an official view of the crash site.

The bus was heading north on First Street shortly after 1 p.m. when it was struck head-on by a Toyota Tacoma that was driving south, according to Pittsfield police. The court clerk and the driver of the truck were transported to Berkshire Medical Center.

The yellow school bus had initially been scheduled to leave the courthouse for the view at 2 p.m., but it left about an hour earlier with the agreement of all parties, because jury selection had wrapped up earlier than expected.

The eight jurors who had been seated included five women and three men — enough for a panel of six jurors and two alternates.

Shugrue told The Eagle the trial bus took First Street to avoid construction that was happening on a more direct route.

The attorneys and court personnel were seated at the front of the bus and jurors were seated in the rear when the crash happened.

“He hit us straight on,” Shugrue said, noting that the impact knocked him out of his seat and onto the floor of the bus, and all the passengers were jostled around by the impact.

He said about six police cruisers arrived at the scene near the Cumberland Farms in the area of First and Adam streets.

No charges or citations had been issued against the driver of the truck as of Monday afternoon, according to Pittsfield police.

Shugrue said it was the first time in his career anything like that has happened.

“It’s not fair to use these jurors,” he said, “they just were in a head-on collision.”

Thompson, 61, was director of Mass MoCA for more than three decades before he stepped down from that post in October 2020. He is a member of The Eagle’s Advisory Board.

Tyne declared a mistrial after the crash. A spokesman for the DA’s office said a new trial date is expected to be set on Tuesday, but the clerk’s office said the timeline for picking the new date still wasn’t clear.

Jurors had heard opening arguments in the case before the crash occurred, derailing the trial.

ADA Weissman told jurors they were due to hear North Adams Police Officer David Sherman testify about the “horrific” crash scene. The crash occurred in the area of the bend where Ashland Street merges with Church Street in North Adams.

Weissman said that Fortier suffered “massive trauma” in the collision and was found bleeding, his breathing labored and his limbs positioned in an “unnatural position.”

In the defense’s opening statement, Shugrue argued that Thompson did everything he could to avoid colliding with the motorcycle driven by Fortier, who he said had a blood-alcohol content of 0.27, more than three times the legal limit, at the time. Shugrue said Fortier had visited three North Adams establishments — the Hot Dog Ranch, the Key West Lounge and, finally, the Mohawk Tavern — before the incident.

Shugrue told jurors Thompson had consumed no alcohol, was not using his phone and had the radio “turned down.” He said Fortier was traveling south on Ashland Street then overshot the intersection where the roadway merges with Church Street, and crossed into Thompson’s lane.

Thompson, his lawyer said, saw the headlight of Fortier’s motorcycle coming “directly at him.”

Shugrue said Thompson could not swerve to the right because there were trees and houses on that side, so he swerved his SUV left into the opposing lane to try to avoid a crash.

Meantime, Fortier realized he was in the wrong lane, Shugrue argued, and started to maneuver back toward the southbound lane at a 45-degree angle, and in so doing struck the right front passenger-side tire of Thompson’s SUV.

He said Thompson acted as any normal person would when confronted with “a sudden emergency” and was aiming to avoid a collision.

“He almost avoided it, but he didn’t, because Mr. Fortier turned back into his vehicle, and then hit it. That’s what caused the accident, not Mr. Thompson,” Shugrue said.

After a mistrial in June, the vehicular manslaughter case is slated to move ahead Monday. The first attempt at a trial was derailed when a bus carrying jurors to the North Adams scene of the fatal collision at issue crashed in Pittsfield.

Vehicular manslaughter trial of Joseph Thompson hinges on one key question: Who was in the wrong lane?

The vehicular manslaughter retrial of the founding director of the Massachusetts Museum of Contemporary Art started Monday in a Pittsfield courtroom.