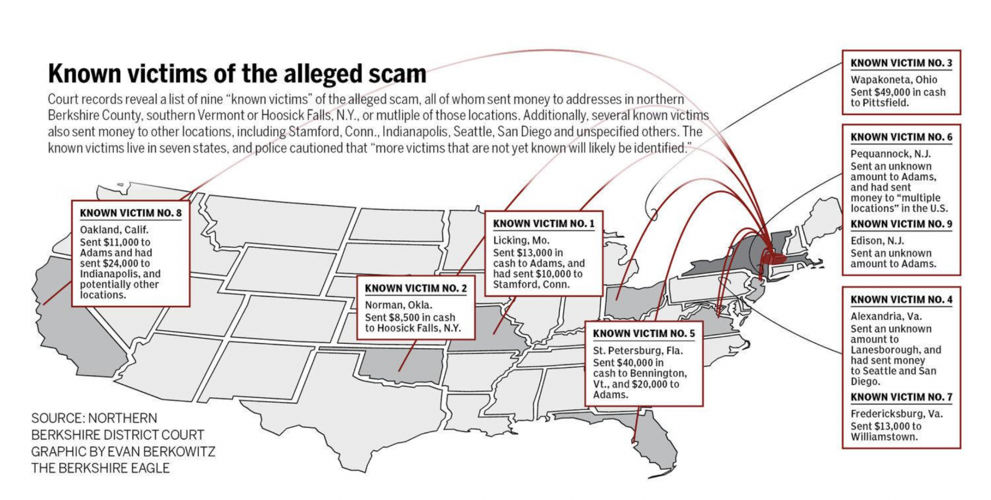 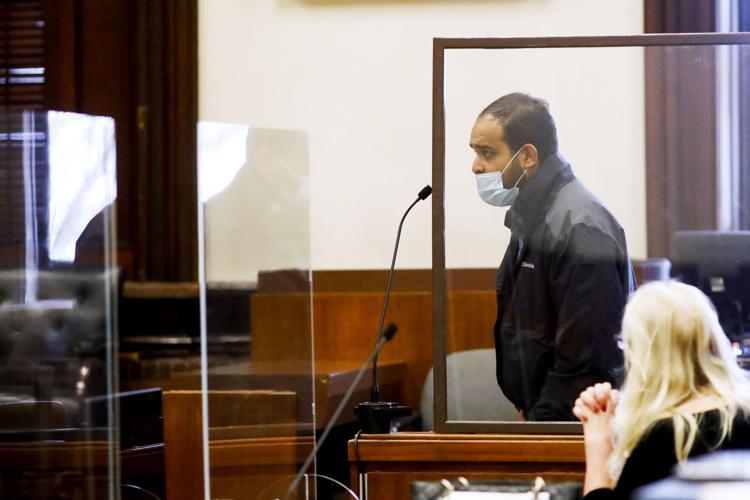 Victims of a nationwide fraud orchestrated from the Berkshires will get their money back, following guilty pleas by three men linked to a criminal scheme that proved amazingly successful, until a package delivery firm grew suspicious.

Nine people in seven states were persuaded in 2020 to send thousands of dollars in cash to people who claimed to be federal agents. In fact, they were three men in their 20s operating at times from an apartment above a smoke shop on Columbia Avenue in Adams.

On Monday, two of those men — who had been charged with conspiracy, stealing by false pretenses and stealing from those over age 65 — entered guilty pleas to lesser charges, but not before providing $212,924 in restitution, the Berkshire District Attorney’s Office said Wednesday.

District Attorney Andrea Harrington said in a statement that the fraud victims supported a plea agreement that returned most of their lost money. “While sparing them, many of whom are aging and live out of state, from having to travel to Massachusetts to testify,” she said.

The two men’s guilty convictions were filed by the court for two years, sparing them jail time. However, if they are found to have broken laws in the future, that could change. “The court can impose a sentence on this guilty finding,” said Andrew McKeever, Harrington’s spokesman.

Another member of the Chaudhari family, Parth Chaudhari, pled guilty in December to the same charges. All three are responsible for the restitution, Harrington’s office said. Parth Chaudhari was sentenced to time served, which was about eight months.

McKeever said restitution is on its way to those defrauded by the trio. “The court and the Commonwealth has all of the money but it hasn’t been distributed yet.”

As The Eagle reported in 2020, victims of the fraud were frightened by concocted stories of blood and retribution into sending wads of cash by FedEx. The ploys included claims of stolen identities and pursuits by federal agents. As people fell into the elaborate traps, the Chaudharis were alleged to have instructed them not to tell family members.

A 85-year-old woman from Wapakoneta, Ohio, wrapped $49,000 in cash in aluminum foil, placed it in a shoebox and packed it with Snickers bars. That box was recovered by Pittsfield police before being delivered by FedEx, authorities said in 2020.

The callers claimed to represent agencies like the federal Drug Enforcement Administration and the Department of the Treasury, on occasion using the names of actual employees, in case their targets looked them up online, police said at the time of the arrests.

A 85-year-old woman from Wapakoneta, Ohio, wrapped $49,000 in cash in aluminum foil, placed it in a shoebox and packed it with Snickers bars.

One victim from Virginia drove nearly eight hours through the night with her mother and fiancé to retrieve a FedEx package she had sent from the company’s Pittsfield depot, after realizing she’d been scammed. Inside the box: $13,000.

She’d been told a felon in Texas had stolen her identity and that blood had been found inside a car rented in her name.

The caller said the woman’s bank accounts would be frozen because of the identity theft. In an interview with The Eagle, she said she was told the only way to clear her name was to withdraw the required amount of cash and mail it, for which she would be reimbursed by the government.

Despite being told not to speak of the arrangement, she spilled the beans to her boyfriend, who reportedly told her she’d been scammed and added, “Go get your money.”

The men were arrested after a three-month investigation that included a raid on the Adams apartment. That search, authorities say, turned up tens of thousands of dollars in cash, a script believed to have been used to defraud people during phone calls, fake passports and driver’s licenses from different states.

That search was one of 27 conducted in June 2020, Harrington’s office said Wednesday.

The investigation was handled by the Adams Police Department and the Berkshire State Police Detective Unit, aided by the Berkshire County Sheriff’s Office and by police in Lanesborough, North Adams, Pittsfield, Williamstown and in Hoosick Falls, N.Y., the DA’s office said.

A call, a ruse, and guilt: 'Known Victim' in alleged scam with Pownal ties offers warning

Silent, angry and ashamed, they drove through the night from Fredericksburg, Va., to intercept a package at the FedEx distribution center in Pittsfield, Mass.