PITTSFIELD — Over the past two decades, Pittsfield police officers have shot seven people. In four instances, the shootings were fatal.

In all but the most recent incident, which remains under investigation, the shootings were deemed justified and the officers were cleared of wrongdoing.

Most recently, an unidentified officer fatally shot 22-year-old Miguel Estrella in the chest on Onota Street. An investigation into police use of force in Estrella's killing is ongoing by the office of Berkshire District Attorney Andrea Harrington.

Harrington said this month she directed officials involved in the investigation to expedite their work, and pledged to release a trove of documents and evidence to the public once the investigation by state police attached to her office wraps up.

Police in late March were responding to a report that Estrella, whose family said endured depression, had injured himself with a blade. According to authorities, Estrella was armed with a knife and allegedly "advanced" on officers before one of them fired shots.

Estrella's death follows a national reckoning surrounding police killings in America. The family of Estrella, a Hispanic man, has condemned police for using deadly force, and vowed to work to ensure that Estrella is the last person killed by Pittsfield police during an apparent mental health crisis.

Read on for details about police shootings in Pittsfield since the turn of the century, in order from the oldest incident to the most recent.

Details: Police said officers responded to his apartment following a report that a man making threats to harm himself was in the attic with a weapon. Boyd fired a handgun twice and ignored commands from police to drop his weapon, according to the chief at the time, prompting officers to return fire.

Outcome: Officers were cleared of wrongdoing following an investigation led by former Berkshire DA Gerard D. Downing, and no criminal charges were filed.

Details: Former DA David Capeless said Kirchner shot Xavier after the man grabbed his wife and threatened her with a kitchen knife with a 10-inch blade. Police said Xavier "charged" the officers with the knife before Kirchner fired the shots.

Outcome: A state police investigation under Capeless cleared the officers of wrongdoing.

Location: Behind Barry's home at 104 Washington Mountain Road in Dalton

Details: Police were called to assist Dalton officers after Barry allegedly poured gasoline around his garage and threatened to kill his family and himself by starting a fire. During the pursuit, Barry reportedly made a furtive movement, causing officers to fear he was drawing a weapon. Barry was shot three times in the stomach but survived.

Outcome: A state police investigation under Capeless determined Colello did not act improperly when he fired his weapon. He was cleared of wrongdoing and no criminal charges were filed against him.

Location: Pursuit that ended at Springside Park in Pittsfield

Details: Streit fired three rounds at a vehicle allegedly being driven toward police at a high speed after the driver fled from a traffic stop. The pursuit ended at Springside Park. According to Capeless, Marauszwski tried to drive out of the park's playground area toward Streit, who was out of his vehicle.

The DA said Streit "repeatedly" ordered Marauszwski to stop before firing three shots toward the vehicle. Marauszwski was shot once in the chest and survived.

Outcome: Streit was cleared of wrongdoing, but Marauszwski’s lawyer questioned whether the force was justified.

Marauszwski went on to file a civil suit against Streit. Marauszwski died on April 8, 2022, but his lawyer has indicated in court documents that Marauszwski’s family remains interested in pursuing the claim.

PITTSFIELD — "If I didn't act, I was going to get run over."That was the testimony on Thursday from Pittsfield Police Officer Martin Streit, who fired three shots at Mark Marauszwski's SUV on …

According to Capeless, Gillis had allegedly come out of the house "holding a knife to his throat" and advanced toward officers "despite their calls to drop the knife." The DA said Gillis then changed course and charged at the officers with a knife.

However, Gillis' girlfriend, Jacquelyn Sykes, said she had called the police for help because Gillis was intoxicated and was threatening to harm himself.

In an interview with The Eagle, Sykes lamented a lack of "compassion" on the part of the police who responded to her home that day, and questioned why police used lethal force.

Outcome: Capeless cleared Colello of criminal behavior, noting he "acted lawfully in defense of his fellow officers when Gillis suddenly charged at the officers while brandishing a knife."

Protest staged in Pittsfield man's killing in which officer was cleared

PITTSFIELD — Jacquelyn Sykes stood in Park Square on Saturday afternoon and held up a sign that read "Protect and serve not panic and shoot" at a passing Pittsfield police cruiser. It has been …

Details: Robinson's mother, Carol, called police before 11 p.m. because Robinson was throwing things inside her Glenwood Avenue residence, according to the Berkshire DA's office. While officers spoke with Carol outside, an officer said Robinson smashed a window with what appeared to be a wooden bat.

He claimed to have a gun, and the DA's office said Robinson told the officers, "Come inside and see what happens. I will kill you."

Asked whether her son had a gun, Carol said he once had a BB gun, but he didn't have it with him that day. Police said a 12-year-old boy was inside 14 Glenwood Ave. at the time, and officers were concerned with getting the child out.

Robinson emerged from the home holding what one officer said was a knife in one hand, and a broken golf club in the other, according to a report released by the DA's office about three months after the shooting. 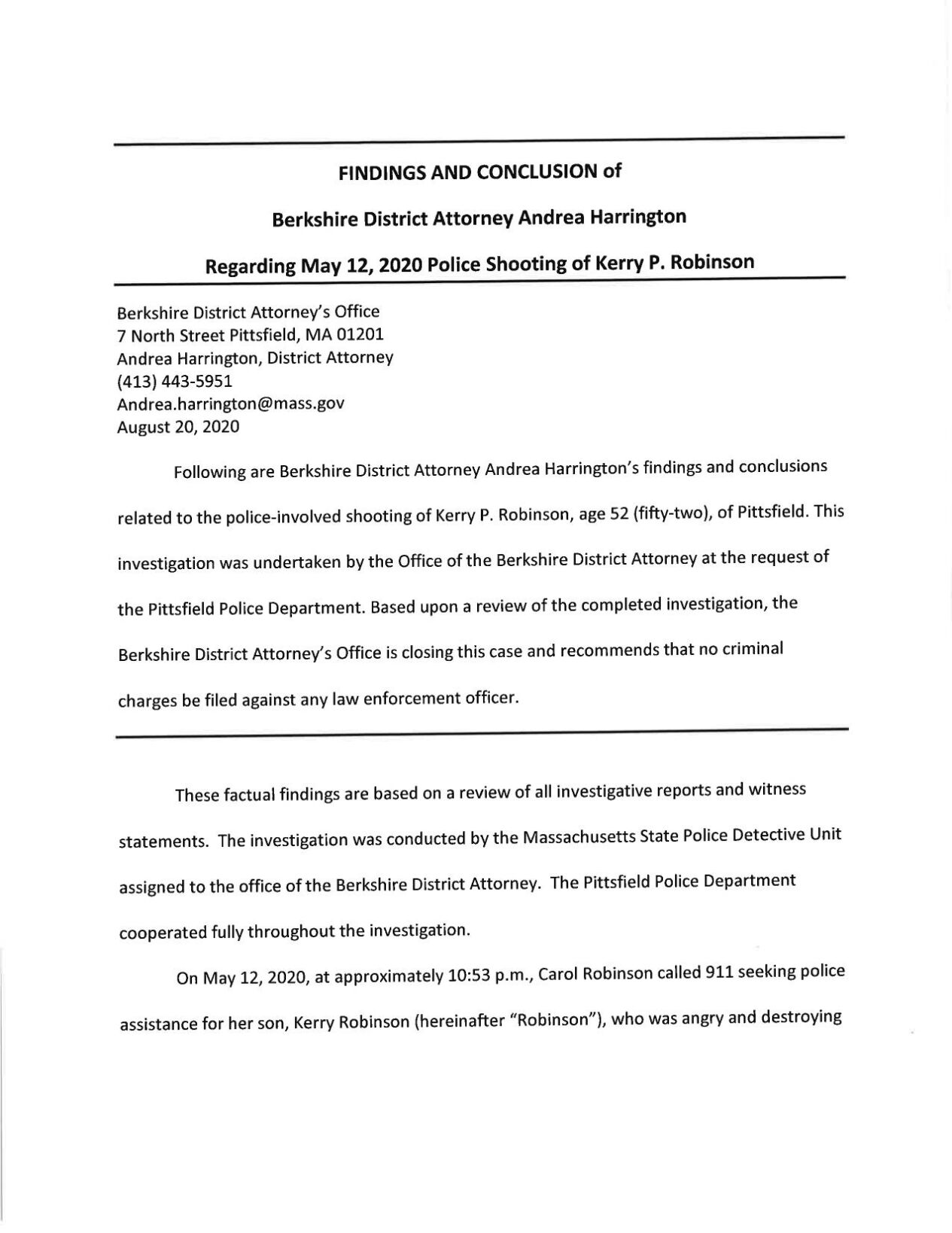 According to the report, officers yelled at Robinson to drop the knife, but he did not comply. Locking eyes with Murphy, Robinson hoisted the knife above his head and screamed while "advancing" toward him.

Another officer fired several "less-lethal" beanbag rounds at Robinson, but it was unclear whether they made contact, and Robinson began "closing in" on Murphy, who was walking backward with his service weapon drawn. Murphy lost his footing while backpedaling, the DA's office said.

Murphy fired two shots at Robinson as the sergeant was falling to the ground. Robinson was struck in his right thigh.

Outcome: Andrea Harrington, the Berkshire DA, cleared Murphy after an investigation, and declined to bring charges.

No bail for man shot while allegedly lunging at Pittsfield officer

PITTSFIELD — A city man who was shot while allegedly lunging at a police officer with a golf club has been ordered held without bail for up to 120 days. Kerry Robinson, 52, suffered a single …