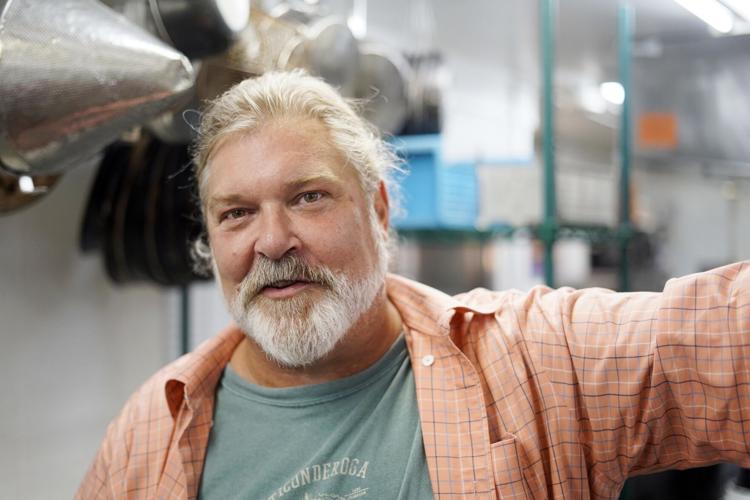 Kirk Grippo, owner of the Olde Forge Restaurant, was at the restaurant Tuesday to orchestrate cleanup and to take care of his employees. The restaurant suffered a fire Sunday morning, damaging the rear of the building. 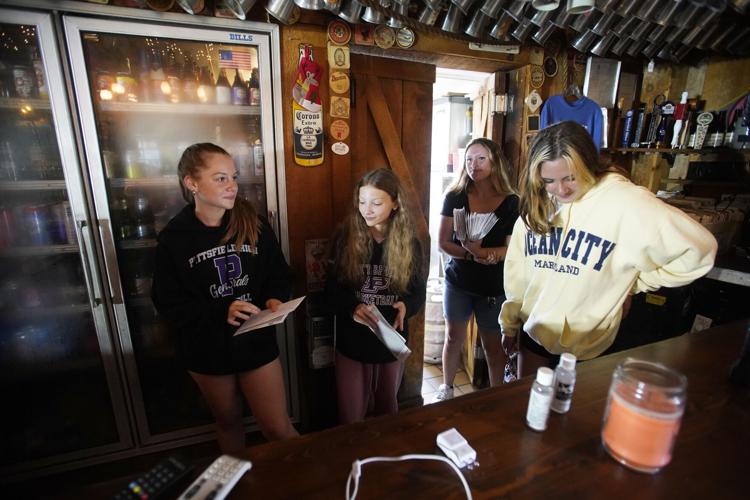 Several Olde Forge employees were on hand Tuesday. The crew is in good spirits and ready to get back to work. 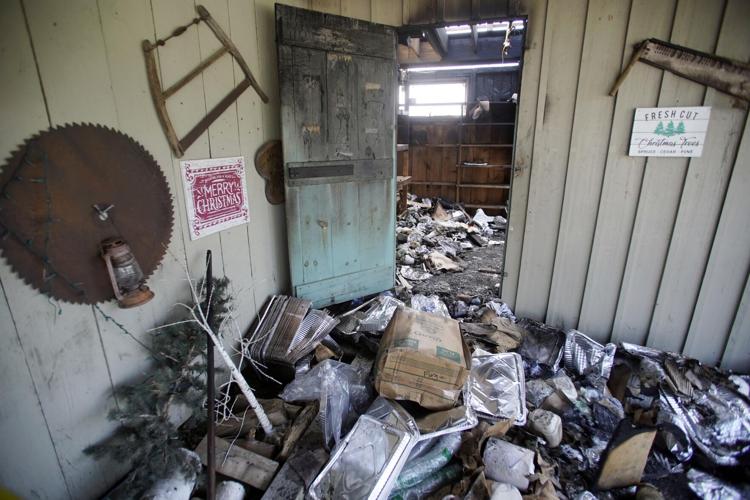 The Olde Forge Restaurant had a fire in the rear of the building in a storage room for uniforms and paper goods. Several fire departments were able to contain the fire. 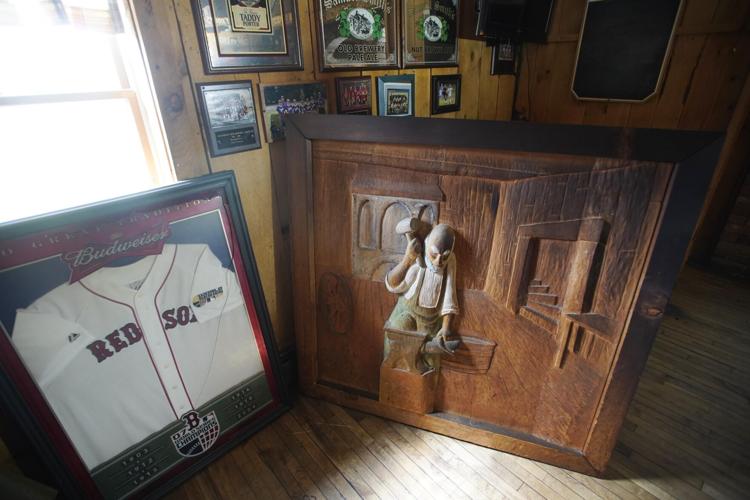 Firefighters pulled a carving by Bill Pendergrass and other artwork from the back of the building during the fire at the Olde Forge. 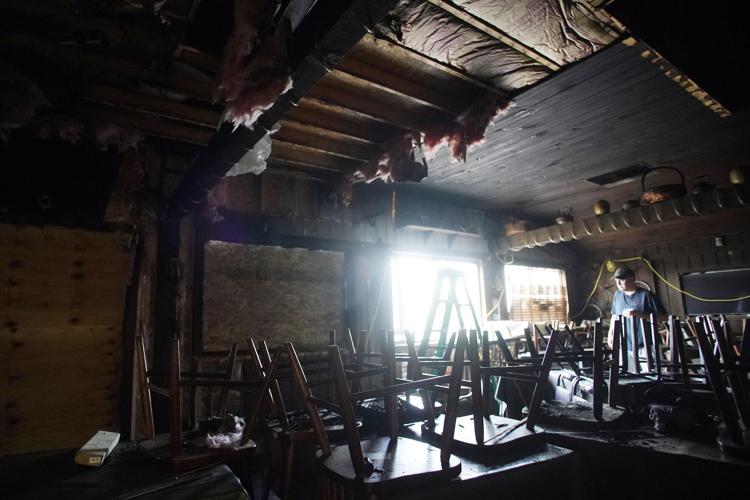 A cleaning worker looks out the window in the rear room of Olde Forge Restaurant on Route 7 in Lanesborough. 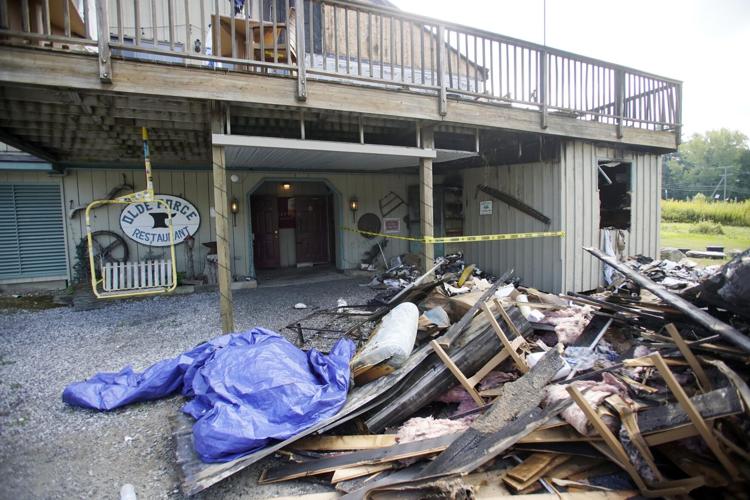 The Olde Forge Restaurant had a fire in the rear of the building in a storage room for uniforms and paper goods. Several fire departments were able to contain the fire.

LANESBOROUGH — Kirk Grippo’s phone kept buzzing Tuesday. For a restaurant owner recovering from fire, it’s one thing after another.

The owner of the Olde Forge Restaurant continues cleaning up and working to reopen after an employee apparently set a portion of the building alight Sunday.

Grippo says the last two days brought a whirlwind of activity, as staff and members of the community have come by the popular Route 7 institution to offer words of assurance. One said the restaurant would rise like a phoenix. Another approached with tears in her eyes and handed him a card.

The fire that damaged the Olde Forge Restaurant was intentionally set by an employee, investigators say

“This place is so much bigger than all of us,” he said Tuesday, standing in the restaurant kitchen. “It’s like we’re all just doing our parts.”

A handful of employees were in to help get ready for a wedding the establishment is catering this weekend, working behind the bar, which remained covered with a thin layer of soot.

Grippo said his hope, after Sunday’s fire, is to reopen during the second weekend in September.

The fire, which burned a storage shed and the restaurant’s rear deck, spared the collection of mugs belonging to regular patrons. They still line one wall. Paper coasters that are pinned up high in rows will be preserved by cleaning crews called in to deal with the aftereffects of the smoke.

Asked if the restaurant will look the same after the cleaning, Dan Kenney, owner of the remediation company, said “absolutely.”

“We’re not going to mess with this space,” he said. “This is the place.”

Earlier, Grippo stood out in back of the restaurant, near the uniform and storage shed that went up in flames. Above him was the back deck, which will be rebuilt.

At his feet: heaps of charred to-go supplies and bent aluminum trays.

An employee, who authorities described only as an adult male, set the fire intentionally, according to the state fire marshal, using smoking materials. No one was injured in fire, which broke out about 10 a.m. Sunday.

Grippo said the employee worked part time as a dishwasher and cleaner, and was one of several people with handicaps who worked at the restaurant.

The employee was recently struggling with problems Grippo said stemmed from his life outside of work. “He was mad at something outside of here,” said Grippo, expressing sympathy for the worker.

State fire officials said Monday that the employee, who they did not identify, will be summonsed to Central Berkshire District Court “at a later date.” Court officials said they’d received no paperwork on the case as of Tuesday.

Grippo said he feels badly for his employee, who he said had experienced difficulties at work in the past. “I like to give everybody one more chance,” he said.

Because the building is made “of the same stuff as matchsticks,” Grippo said he invested in an insurance plan that will allow him to totally rebuild, while ensuring staff members continue to be paid during the closing.

Photos: Olde Forge restaurant in Lanesborough begins clean up efforts after a fire

Kirk Grippo, owner of the Olde Forge Restaurant was at the restaurant Tuesday to orchestrate clean up efforts and take care of his employees. …

State police say an ex-employee of the Olde Forge restaurant used lit cigarettes to set a fire in August that shuttered the popular restaurant for several weeks.