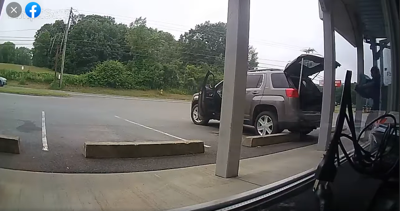 PITTSFIELD — A man broke into PhoneBros on West Housatonic St. Friday at 7 a.m., stealing roughly $8,000 in cash and shoes.

"We've been robbed four times. But yesterday, was probably the worst one unfortunately," said Jeremy Hecht, owner of the store, that has been open for four years.

Hecht posted a video on Facebook where a man is seen loading up a car in front of the store.

While the alarm goes off, the man enters the store three times, returning with shoe boxes.

Hecht said the man first tried entering through the back door. "Then, he broke through the front door, stole the register, ten to fifteen pairs of shoes worth about $5,000 and about $3,000 from the register," said Hecht. "Some boxes he took only had one shoe inside."

Hecht said he has been looking at social media to see if someone was selling the stolen shoes, but he doubts he'll be able to find them. He believes the person in the video is the same one who stole two PlayStation 5s in January. Fortunately, PhoneBros is insured against robberies.

"It sucks. I'm just trying to feed my family and make an honest living, but things happen," Hecht said. "He needed [them] more than I did, obviously, but it's not a great feeling. I'm just happy he didn't break my window this time."