The logo for Berkshire Nautilus, shown in stickers on the right, is visible on the sweatshirt of a suspect in the Jan. 6, 2021, attack on the U.S. Capitol in Washington. 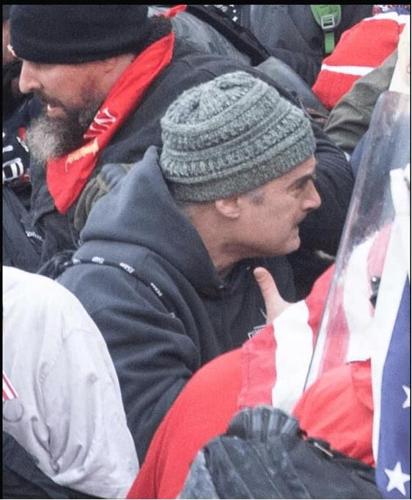 Vincent J. Gillespie, 60, of Athol, was arrested Friday. He is being charged with assaulting, resisting, or impeding officers, civil disorder, engaging in physical violence in a restricted building or grounds and related offenses. 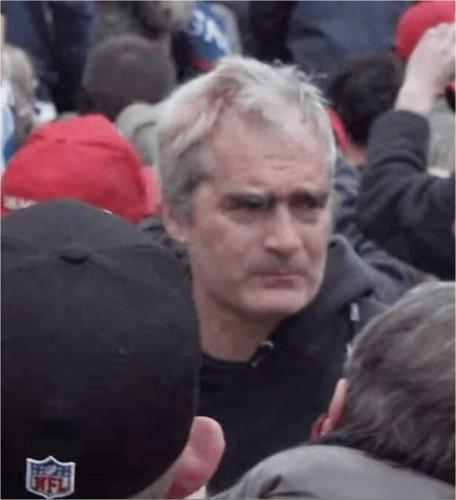 Federal authorities Friday arrested the man pictured at the U.S. Capitol riot in Washington on Jan. 6, 2021, who was wearing a sweatshirt of a Pittsfield gym and health club.

The sweatshirt was local; the rioter wasn’t.

Federal authorities Friday arrested the man pictured at the U.S. Capitol riot in Washington on Jan. 6, 2021, who was wearing a sweatshirt of a Pittsfield gym and health club.

Vincent J. Gillespie, 60, of Athol, was among the throng of rioters in the Lower West Terrace of the Capitol “who engaged in pushing, shoving, yelling, and fighting with law enforcement officers,” according to a statement from the Department of Justice.

Authorities say Gillespie “struggled his way through the crowd” and up to the front line of police officers who were defending an exterior door. He then took a police shield and used it to ram officers while shouting “traitor” and “treason,” according to prosecutors.

As officers fought to hold off the rioters, Gillespie grabbed onto an officer’s arm and tried to pull him into the violent crowd.

In September, the FBI publicized images of the then-unidentified Gillespie in an attempt to put a name to his face, with the special agent in charge of the agency’s Boston outpost saying “no amount of information is too small or irrelevant.”

As he fought with police in the mob that day, Gillespie wore a sweatshirt printed with the logo of Berkshire Nautilus, a local gym and health club. The club’s owner had said he had no clue who the man was, and neither did his members, but derided the suspect’s actions, which he said did not represent his business.

Gillespie was arrested in Athol and is being charged in Washington with assaulting, resisting, or impeding officers, civil disorder, engaging in physical violence in a restricted building or grounds and related offenses. His initial court appearance was set for Friday.

The man pictured in a Berkshire Nautilus sweatshirt on Jan. 6 is the son of a famed American artist

Vincent Gillespie, who wore a Berkshire Nautilus sweatshirt during the siege on the U.S. Capitol, is the son of famed American artist Gregory Gillespie.