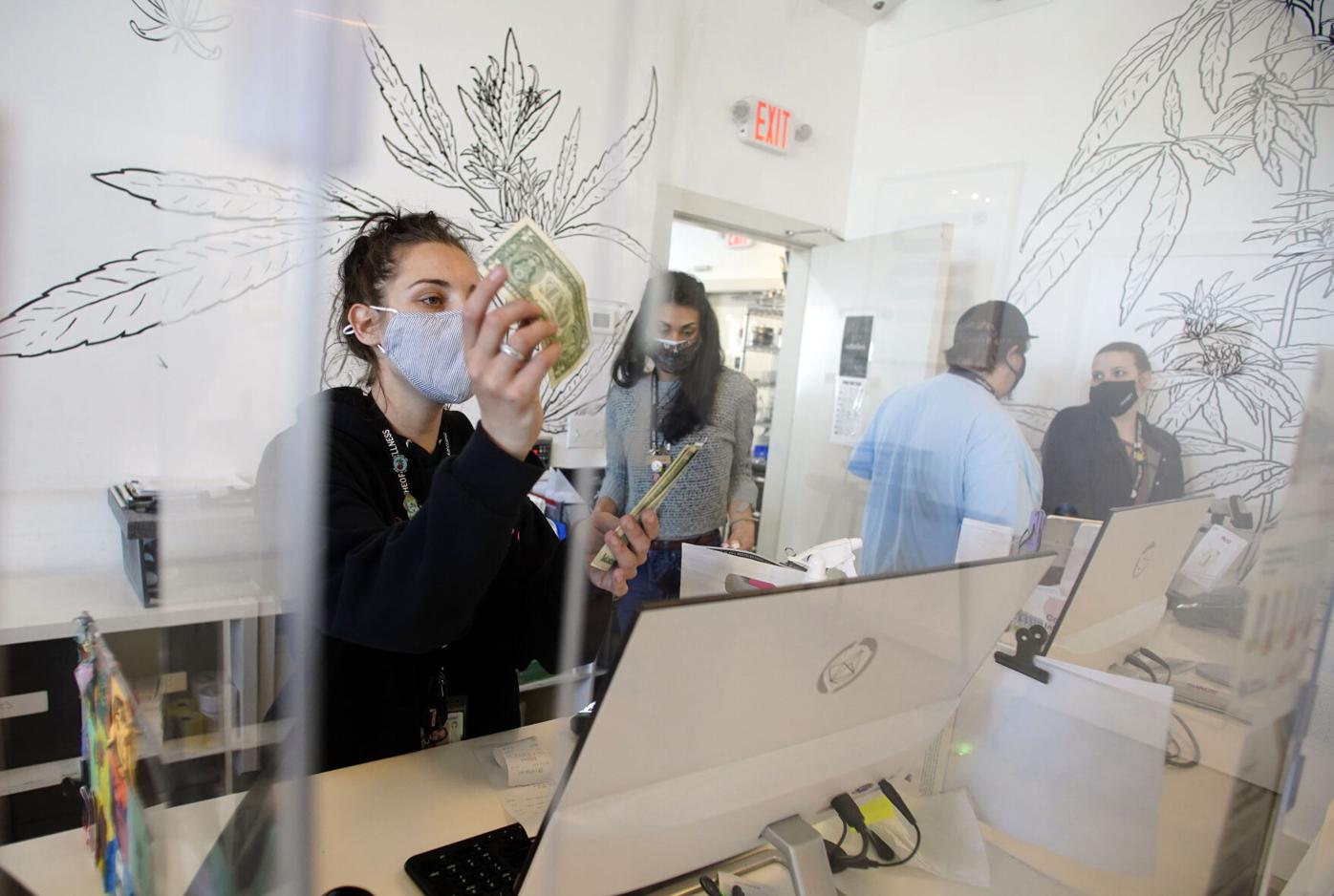 Tasha Candee counts change for a customer at Theory Wellness in Great Barrington. 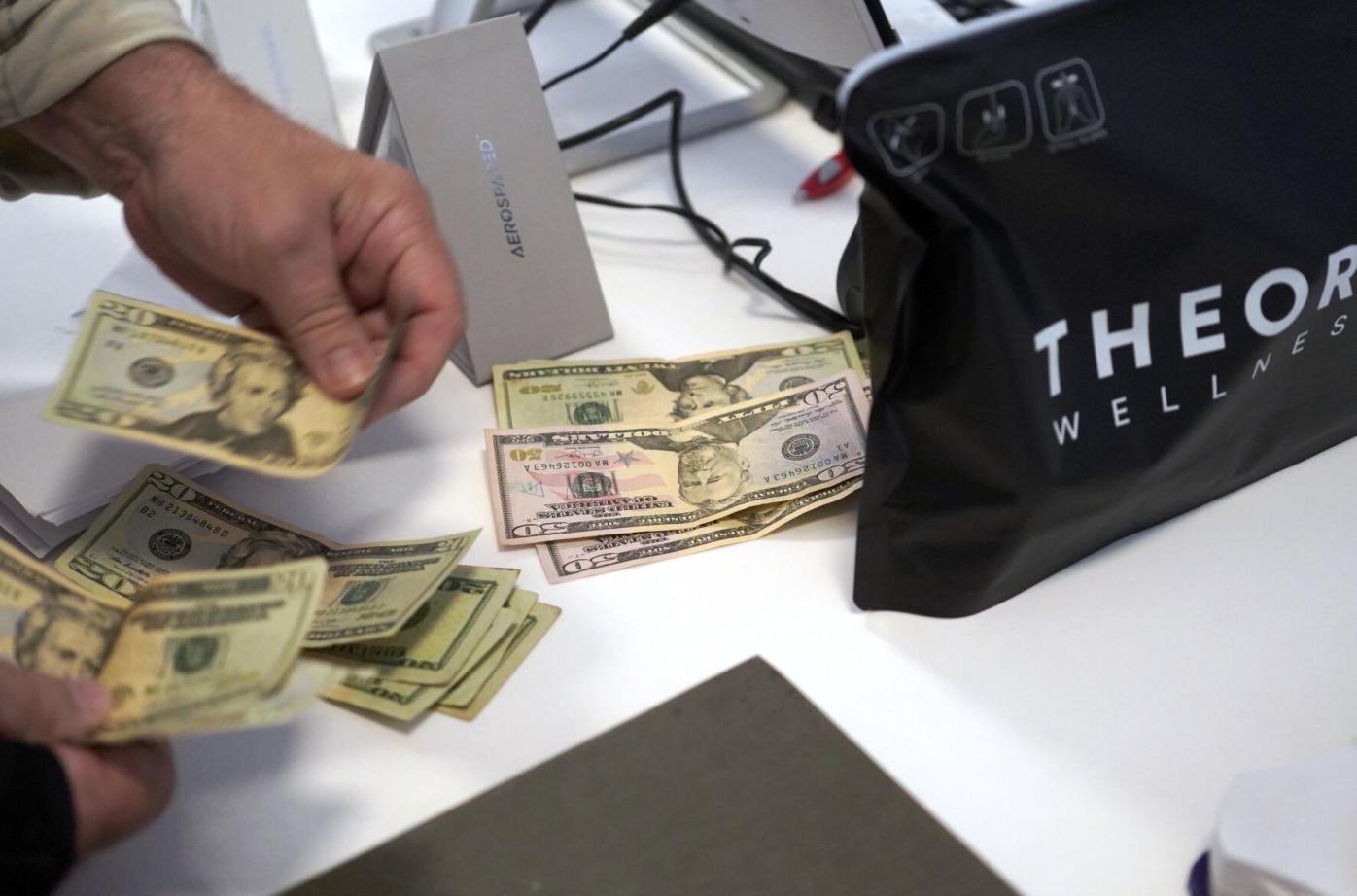 A man pays for a purchase at Theory Wellness in Great Barrington.

At their allotted time slots, customers pay for their online orders with cashiers under a tent, then head to a window in the main building to pick up their recreational marijuana orders at Theory Wellness in Great Barrington.

GREAT BARRINGTON — Theory Wellness failed to properly pay employees who worked Sunday and holiday shifts at its cannabis dispensaries, the state Attorney General’s Office says, depriving hundreds of people of rightful compensation because of a law that soon will be phased out.

The business, with locations in Great Barrington, Chicopee and Bridgewater, has been ordered to pay $300,000 in restitution and penalties after an eight-month investigation.

Theory Wellness President and CEO Brandon Pollock, and Treasurer and Secretary Nicholas Friedman, have been issued one citation for failing to pay its employees premium pay for hours worked Sundays and covered holidays, in violation of Massachusetts wage and hour laws.

“Our office works to ensure that employees are rightfully compensated under the law for the work they do across industries in Massachusetts,” Attorney General Maura Healey said in a statement Thursday. “As a result of our investigation and action in this case, nearly 300 employees who were not paid properly by Theory Wellness will now be made whole.”

The attorney general's Fair Labor Division began an investigation in December 2020, after a complaint from a worker about premium pay. Fair Labor’s investigation determined that 282 employees were owed hundreds of thousands of dollars in premium pay.

In a statement, the company said it was acting quickly to rectify the situation.

"Theory worked closely and openly with the AG’s office as soon as we were made aware of these inadvertent payroll errors," the statement said. "Most importantly, we had the opportunity to provide additional compensation to the former and current members of our team who were affected to resolve this matter swiftly.

"The complexities of a cannabis company are vast with a litany of traditional business-related resources, such as mainstream payroll providers that handle setting up pay rates, unwilling to provide services due to our classification federally. This audit has been an opportunity to correct our policies and reaffirm our commitment to our team members, who make Theory what it is today."

Massachusetts’ wage and hour laws require that employees of certain retail businesses be paid “premium pay” for working Sundays and certain holidays. In 2021, employees who are entitled to premium pay must be paid 1.2 times their regular hourly rate for work on Sundays. In 2022, that rate will go down to 1.1 times their regular rate, and in 2023, the premium pay requirement will be eliminated, pursuant to legislation passed in 2018.

Under the terms of the settlement, Theory Wellness has agreed to pay in full the premium wages owed to impacted employees. The company cooperated with the investigation and since has come into compliance with the premium and holiday pay laws.

Any workers who believe their rights have been violated in their workplace can file a complaint at mass.gov/ago/wagetheft.

For information about the state’s wage and hour laws, workers can call the Fair Labor Hotline at 617-727-3465, or go to the attorney general’s Workplace Rights website mass.gov/service-details/fair-labor-division-data.