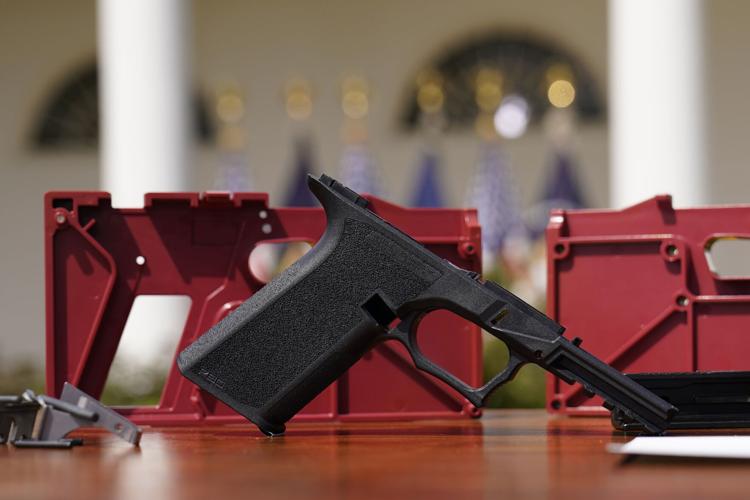 A 9mm pistol build kit with a commercial slide and barrel with a polymer frame is displayed in April before an announcement about a final version of a federal ghost gun rule. 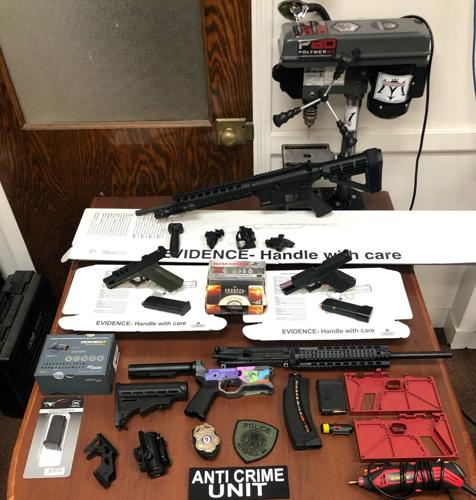 Pittsfield Police display items they found in October during a search of apartments on Lenox and Dewey avenues. Police found firearms, firearm parts and accessories, ammunition and manufacturing equipment inside the apartments, according to a news release.

When police raided a pair Pittsfield homes late last year, they found not only loaded firearms, but unassembled gun parts and tools for a home workshop.

Pittsfield police arrested two men on weapons charges and reported recovering scopes, Dremel tool accessories, a gun sling, and a box from Polymer80, a company that manufactures what authorities have come to refer to as “ghost guns.”

It followed an investigation into the firearms in Pittsfield, Berkshire County’s largest community. These kinds of weapons are privately manufactured guns that skirt traditional supply chains.

Nationwide, the federal government said that roughly 20,000 of them were recovered last year during criminal investigations and reported to the Bureau of Alcohol, Tobacco, Firearms and Explosives.

According to the White House, that’s a tenfold increase since 2016.

The gun parts can be purchased online, sometimes in prepared kits, and then assembled at home by people who need only “minimal knowledge and skill,” Pittsfield police said in a statement announcing the 2021 arrests and seizures.

The untraceable firearms haven’t been a problem so far in Great Barrington, said police Chief Paul Storti. But in North Adams, Chief Jason Wood said they’ve turned up during arrests.

In addition to weapons used in crimes, Wood said the term ghost guns can refer to those put together by hobbyists.

“I’m going to guess that more people have them than we know,” he said. “There could be some gun enthusiasts that make them and they’re responsible with them, and we would never know.”

“On our side, we see them when we arrest somebody, but I don’t think it’s just criminals that possess them,” Wood said.

The weapons lack serial numbers and therefore can’t be traced. They are not registered with government authorities.

That’s one reason why, in a state like Massachusetts, ghost guns may be made or possessed by people who otherwise wouldn’t be able to access firearms legally, because they wouldn’t pass a background check due to criminal convictions, or because of their age, said Ari Freilich, state policy director for the Giffords Law Center, a gun control advocacy organization.

“This market [for ghost guns] has really shown up in states where there’s strong gun safety laws like Massachusetts, like California, like New York,” he said in a recent interview. “It’s in many ways a testament to the strength of those states’ safety laws, because in some neighboring states, we don’t see the same market.”

That leads to untraceable firearms being among the leading sources of guns used in the commission of crimes, he said. Companies sell parts such as barrels and receivers online and market them as kits. A receiver is the part of a handgun that “receives” the ammunition and fires it.

Ten states have passed legislation to broaden or clarify the definition of what is covered by gun laws to include frames and receivers, whether or not they’re marketed as a kit, said Freilich.

Legislation pending on Beacon Hill would regulate ghost guns and could require manufacturers to place serial numbers on gun parts and address penalties for possessing one. State Reps. William “Smitty” Pignatelli, D-Lenox, and Tricia Farley-Bouvier, D-Pittsfield, are co-sponsoring the bill.

“The gun play in the Berkshires has to be taken more seriously. This is getting out of control.”

Pignatelli said that while he supports the rights of legal gun owners, he opposes the illegal possession of weapons, whether it is ghost guns or firearms that have had their serial numbers removed.

“The gun play in the Berkshires has to be taken more seriously. This is getting out of control,” he said. “We’re not immune to this. We need to get ahead of it and be smart about it.”

Farley-Bouvier said state law must be modernized to address the what she said is the growing issue of privately made, unserialized firearms.

“Like anything we do, we need to keep up with the times and we have to respond to the current technology,” she said. “We need to regulate these ghost guns.

“We can’t just have people being able to 3D print them or order the parts online and assemble them themselves, without the serial numbers. Without being being able to have the background checks.”

In April, the Biden Administration proposed a new rule that would, in part, require that only licensed manufacturers produce the kits, which would be required to include serial numbers on the frames or receivers.

Unserialized firearms already in the community would be required to have serial numbers added when obtained by a licensed dealer or gunsmith.

A bill passed by the U.S. House last week seeks to ban the manufacturing or sale ghost guns, though the AP reported the proposed legislation unlikely to clear the Senate.

In Pittsfield, Emmanuel Kodjo, 23, and Taylor Bartlett, 18, face gun charges and were ordered held without bail following the investigation into ghost guns that was led by investigator Thomas Bowler and Officer John Virgilio.

“Illegally owned firearms and ‘ghost guns’ are an ongoing problem in Pittsfield and beyond,” a department official said at the time of their arrests.

In North Adams, a 32-year-old man was arrested after allegedly brandishing what police determined to be a ghost gun during an argument at the Brayton Hill Apartments. Richard C. Smith allegedly pulled that weapon gun on a man on Feb. 14 after an argument about his daughter hanging out with the mother of Smith’s child, according to a police report.

Through surveillance footage and witness interviews, North Adams police connected Smith to a black handgun that an officer found in the back of an apartment.

Police said the handgun was loaded with a single round and lacked a serial number and manufacturer’s insignia. The police report said authorities believed the weapon was of the type whose parts can be purchased online and assembled at home.

A man whom authorities accuse of pulling a "ghost gun" on another man in North Adams was ordered held without bail this week pending a dangerousness hearing in Berkshire Superior Court.