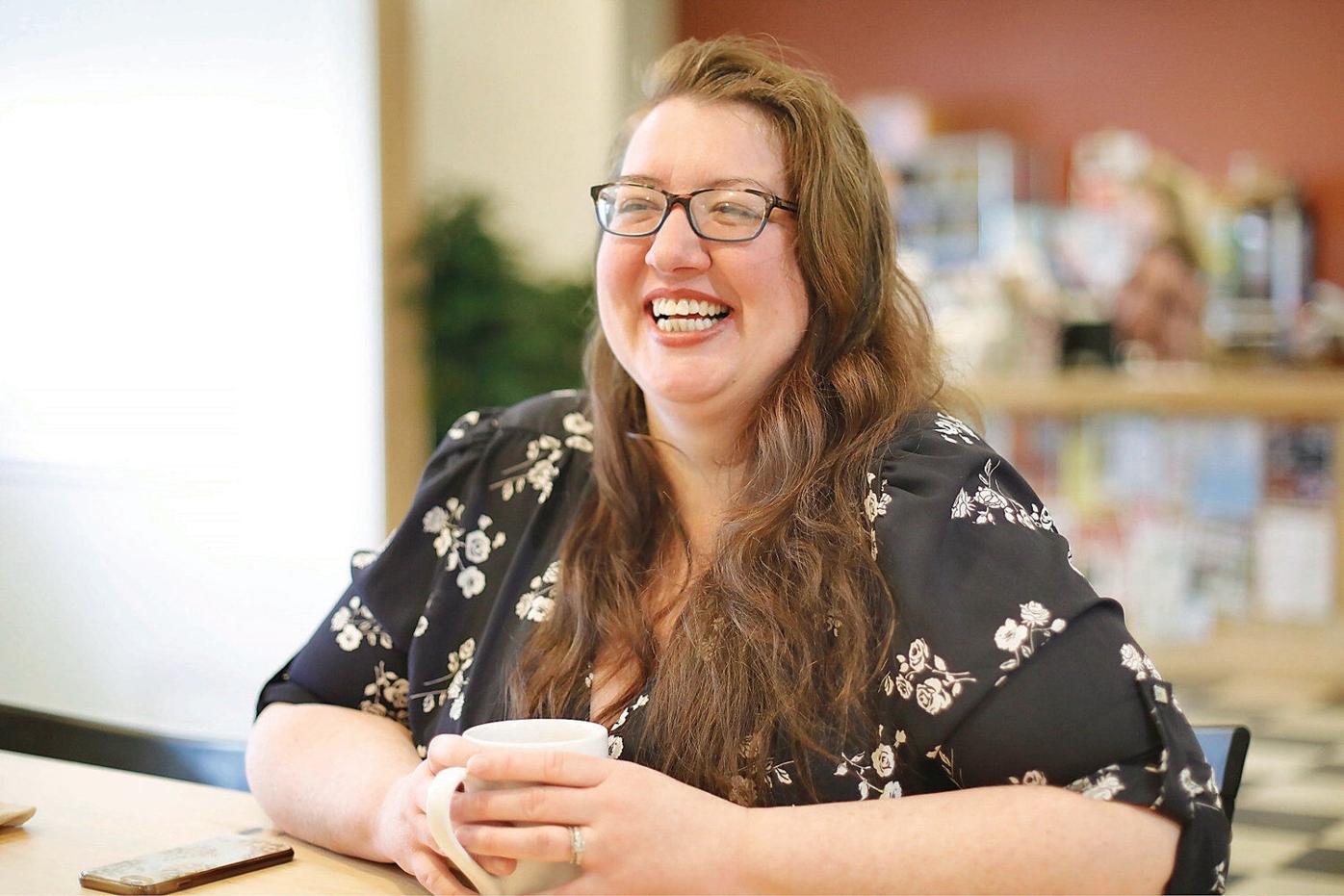 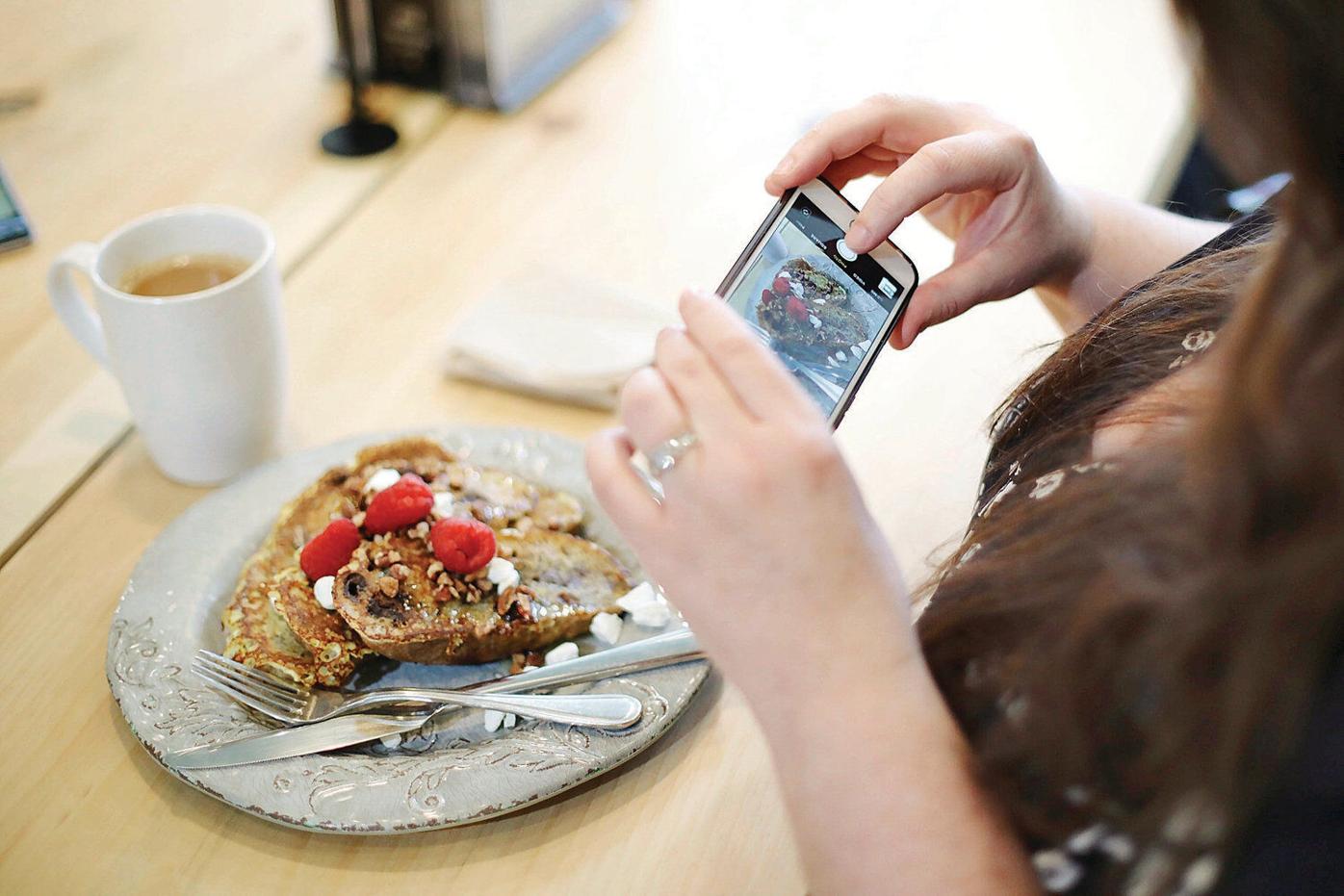 Monica Bliss snaps a photo of her Cherry Pecan Dipped in Flan at Berkshire Mountain Bakery in Pittsfield. 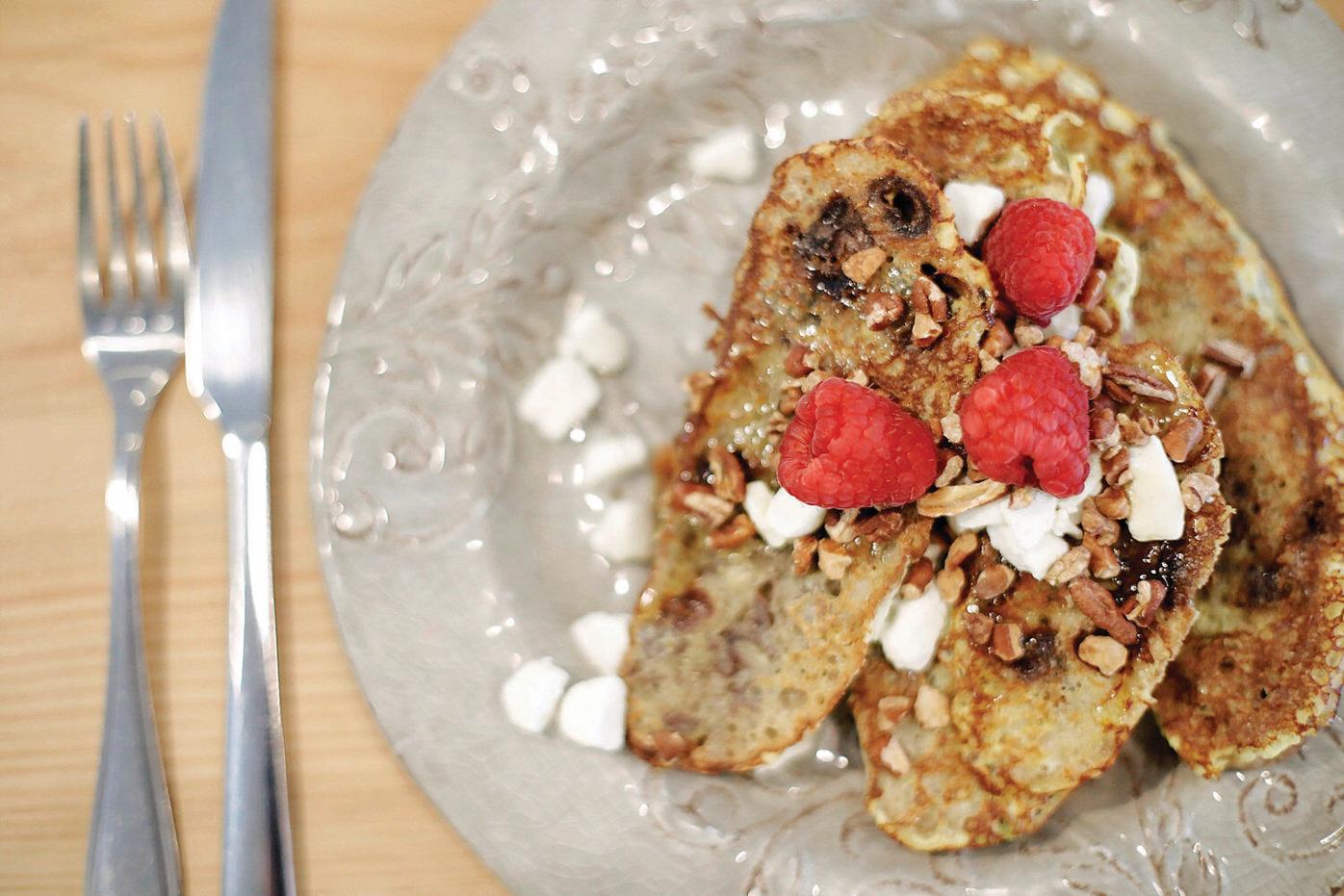 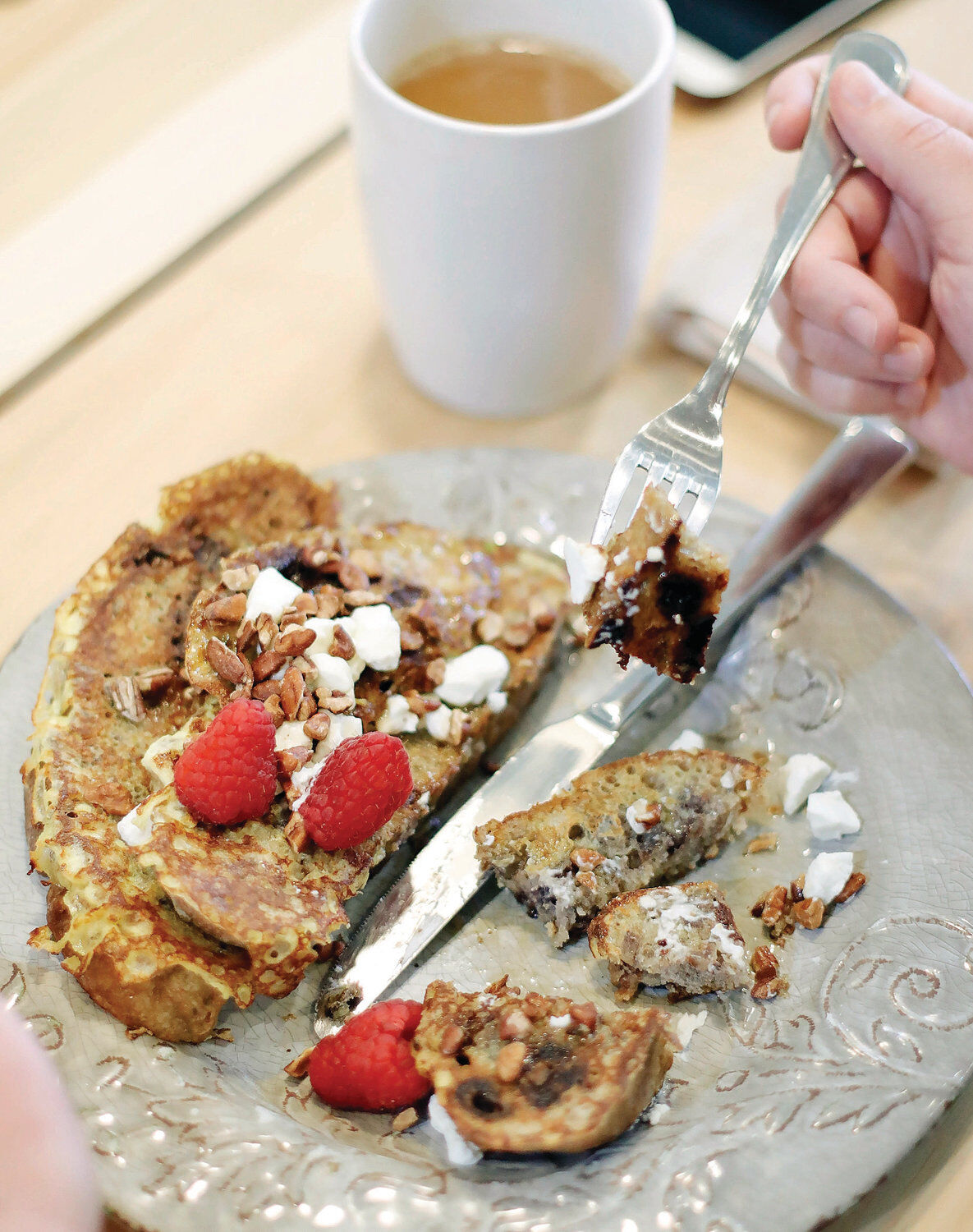 Monica Bliss starts in on the Cherry Pecan Dipped in Flan at Berkshire Mountain Bakery in Pittsfield. 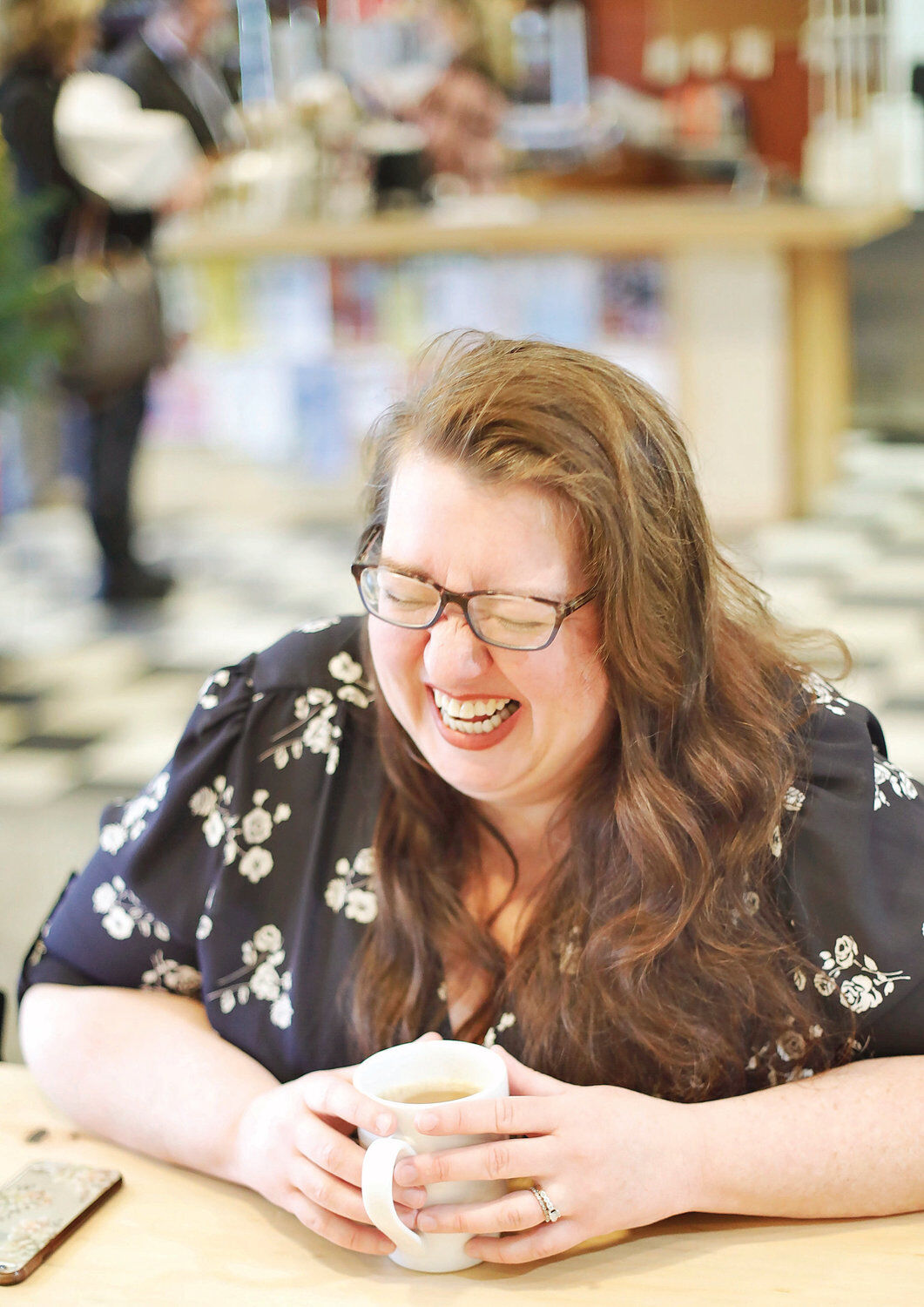 Monica Bliss snaps a photo of her Cherry Pecan Dipped in Flan at Berkshire Mountain Bakery in Pittsfield.

Monica Bliss starts in on the Cherry Pecan Dipped in Flan at Berkshire Mountain Bakery in Pittsfield.

PITTSFIELD — Monica Bliss was in the midst of a hectic morning when she ordered the "Cherry Pecan Dipped in Flan" — French toast topped with honey, goat cheese and candied pecans — and a coffee at Berkshire Mountain Bakery on Thursday.

"The contractors arrived a little early today," the Whitney Center for the Arts' artistic director said after taking a seat at one of the Pittsfield establishment's long wooden tables.

Bliss, her husband, Matthew Cahill, and their children continue to live in their New Lebanon, N.Y., home while it undergoes a complete renovation, leading to a little more scrambling than usual. But the project hasn't stopped Bliss from keeping a busy Berkshire schedule as she continues to build the Whitney, which was founded in 2012, into a Pittsfield performing arts hub. After breakfast, she would be consulting with a couple of interns working on the promotion of "The Vagina Monologues." Beginning at 7 p.m. Friday, Feb. 22, and 3 p.m. Saturday, Feb. 23, actors will read Eve Ensler's famous play at the Whitney as part of the 10x10 Upstreet Arts Festival.

"This is a piece that I've always been very fascinated with, and I love working with women," Bliss said. "It's very hard to even find men in this area to cast in your shows. It's easier for the companies who can pay a lot of money, but for those of us who can only pay very little or who can't pay at all, the pool of men is very small. It is almost nonexistent. It's well-known among the community theater community in this area that that's how it is. So, I wanted something that I would have no trouble casting."

In 2018, the Whitney hosted a fully staged production of the play. About 80 women auditioned, Bliss said.

"The show itself was amazing, and the audience responded very well," she said.

The upcoming readings are a benefit for the 2019 V-Day campaign, "a global activist movement to end violence against all women and girls (cisgender, transgender, and those who hold fluid identities that are subject to gender based violence)" that the play inspired, according to the organization's website. The Whitney will donate 90 percent of its readings' proceeds to the Elizabeth Freeman Center. The remaining 10 percent will go to the V-Day "Spotlight" fund, which focuses on helping formerly incarcerated women as well as women in prisons and detention centers.

Preparations for the readings are underway. Bliss had a one-on-one scheduled with an actress shortly after her intern meeting as well as one later in the day. In between, she would be heading to Berkshire Community College, where she is taking classes.

She's enrolled in stagecraft and jazz courses as well as Western Civilization.

"When I went to school originally, I was just focusing on performing," said Bliss, who studied opera at the University of Hartford's Hartt School of Music for three semesters before attending Massachusetts College of Liberal Arts for the same amount of time. "I didn't want anything to do with any other aspect of it, except for maybe costumes and makeup because I was immediately attracted to that kind of stuff. But I completely ignored all of the other technical aspects of theater. Now that I'm managing productions, it's very hard not to have that knowledge, so I'm forcing myself to go back and learn how to do that."

As part of her stagecraft class, she designed and hung the lights for Town Players of Pittsfield's "New and Used" production that wraps up Sunday. She will be doing the same for "Pippin" later this semester.

In her jazz course, she's learning how to sing with a band. That may come as a surprise to some in the Berkshires who know Bliss as the Sunday soprano soloist at the First Congregational Church in Stockbridge or as a chorus member in the Berkshire Opera Festival, which will perform "Don Pasquale" this summer at the Mahaiwe Performing Arts Center.

"My husband's a musician. He's in bands, and everyone's always like, 'Get up and sing.' And I'm terrified to do it. I don't even like singing karaoke, to be honest," Bliss said. "But I want this skill, not only just for fun, but .... I could have more professional gigs if I had this skill."

The Berkshire native has been honing her vocals since the outset of elementary school.

"When I was in kindergarten, I can firmly remember standing on the stairs, waiting to go onstage to sing a song about owls," Bliss said, "and in that moment, I determined that I would be a singer, and it was what I was born to do. And I've never, ever faltered."

After living in Pittsfield and, briefly, Cheshire, Bliss moved to Dalton, where she attended Wahconah Regional High School. Her father, Roger Bliss, died during her youth; by her junior year, she was living on her own. (Bliss added that she's on good terms with her mother and stepfather, Kelly and Ed Szklasz.) She worked multiple jobs to support herself at that time. During school, theater sustained her.

Following her time at the University of Hartford, Bliss returned to the Berkshires. She performed with, among many others, the Town Players of Pittsfield. In the past, Bliss has served as president and publicity chair of the community theater group that staged productions at the Whitney for several years before returning to its Berkshire Community College home in 2017. Bliss' work with Town Players led the Whitney's executive director Ghazi Kazmi, to offer her a position curating, developing and managing the center's performing arts programming in September 2017.

"When Town Players left, there wasn't a lot going on," Bliss said of the need for the role.

With her daughter Aria joining sister Zoey and half sisters Jordan and Rachel at school that fall for the first time, Bliss had been planning to relax for a few months after years of full-time stay-at-home mother duty.

"People think that being a stay-at-home mom is a break, but it is not a break. It's really hard work," she said.

Her last paid job had been a sales manager gig for Barrington Stage Company.

"I can't tell you how much I learned at Barrington Stage about the administration of theater," Bliss said.

Ultimately, she felt ready to accept the Whitney's director of performing arts position. Now, as the center's artistic director, she's preparing for three major productions this summer and multiple one-person shows dotting the calendar, among other offerings. She relishes the opportunity.

If you'd like to leave a comment (or a tip or a question) about this story with the editors, please email us.
We also welcome letters to the editor for publication; you can do that by filling out our letters form and submitting it to the newsroom.
© Copyright 2020 New England Newspapers, Inc., 75 S Church St Pittsfield, MA | Terms of Use | Privacy Policy
Powered by BLOX Content Management System from TownNews.com.
You don't have any notifications.