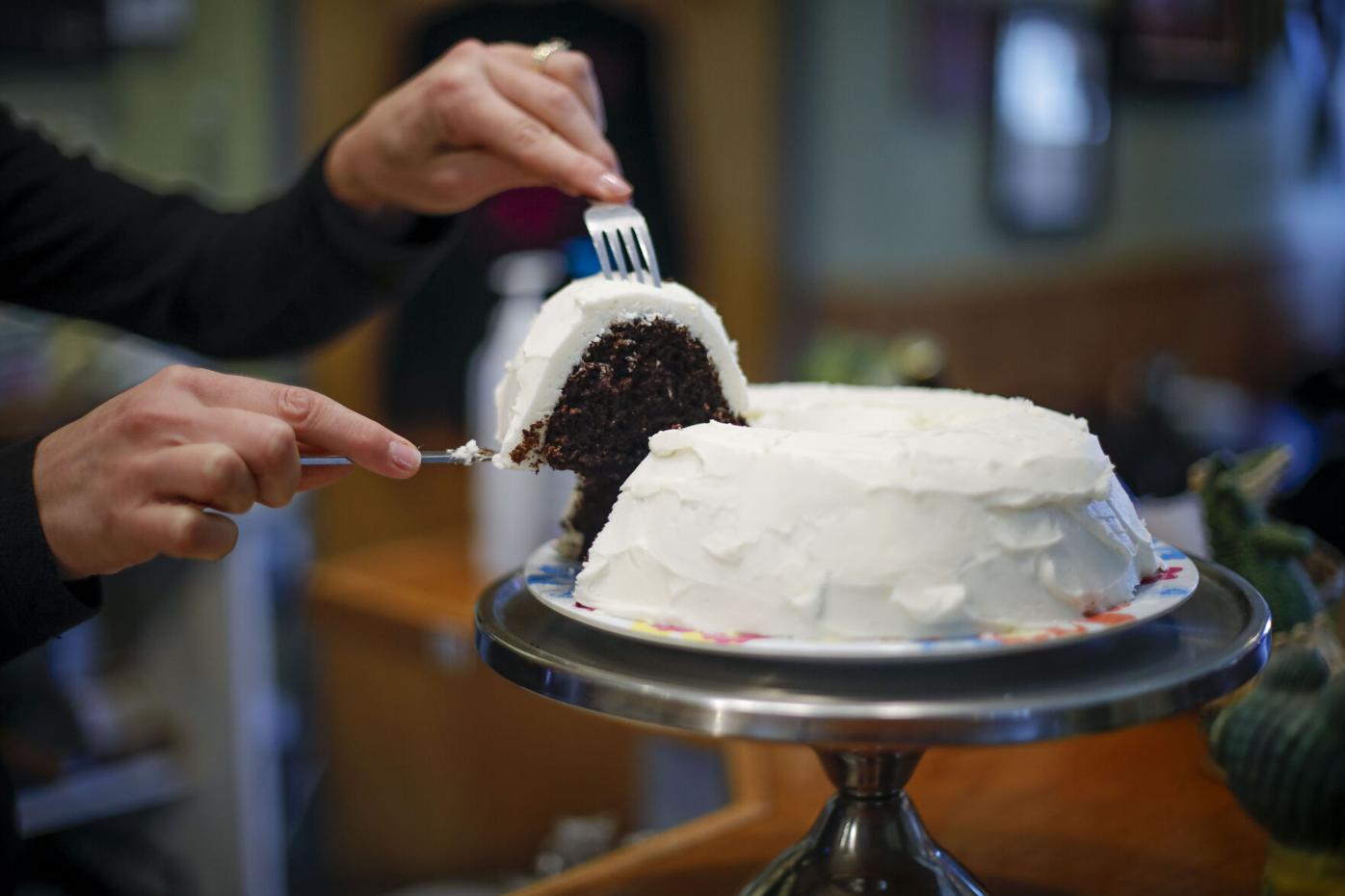 The chocolate cake is a specialty, perfected by owner Alan Lussier’s late mother, and is now made for the restaurant by Lussier’s mother-in-law. 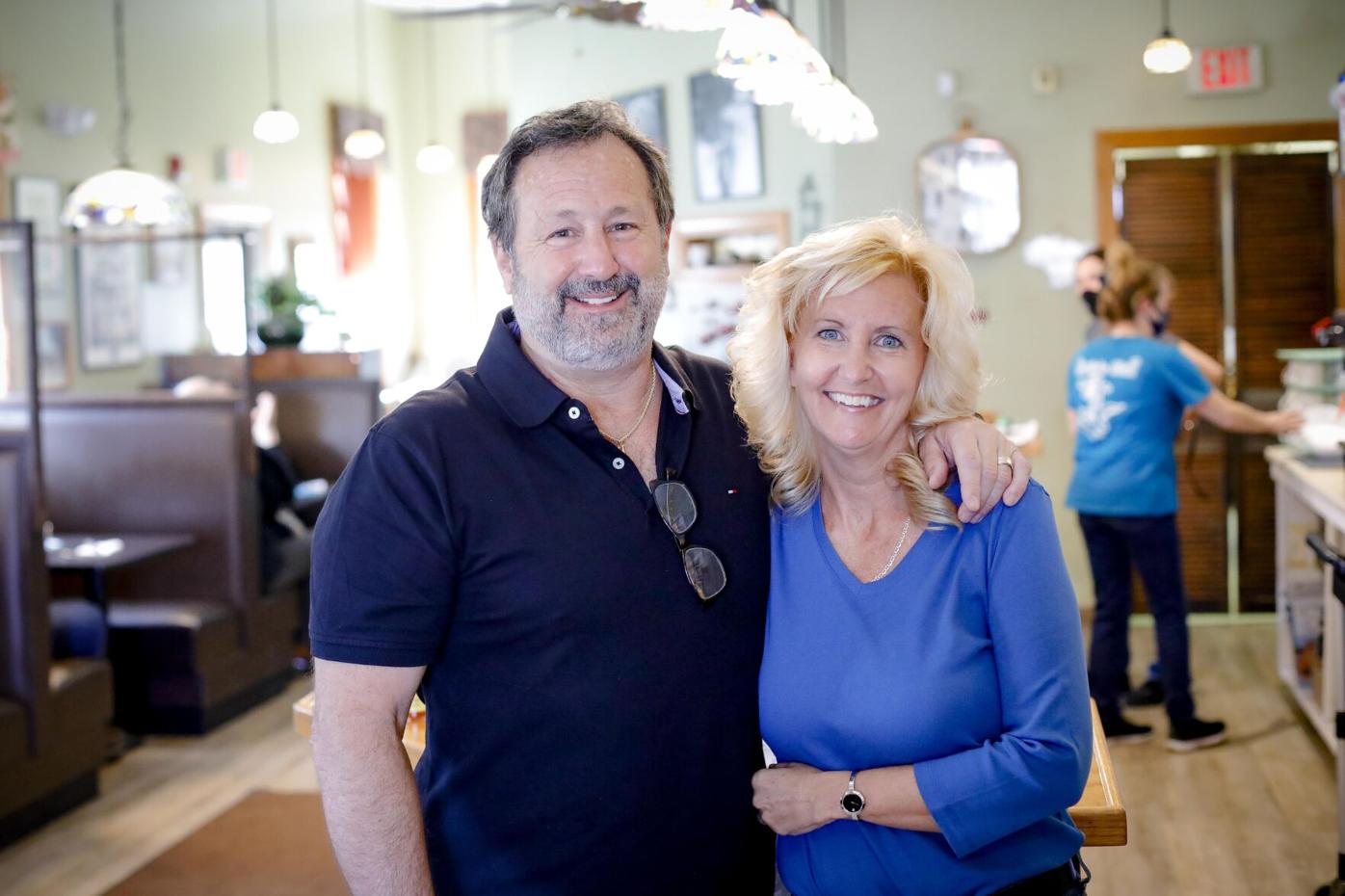 Ozzie’s Steak & Eggs owners Alan and Tracey Lussier at the restaurant they opened in March 2003. 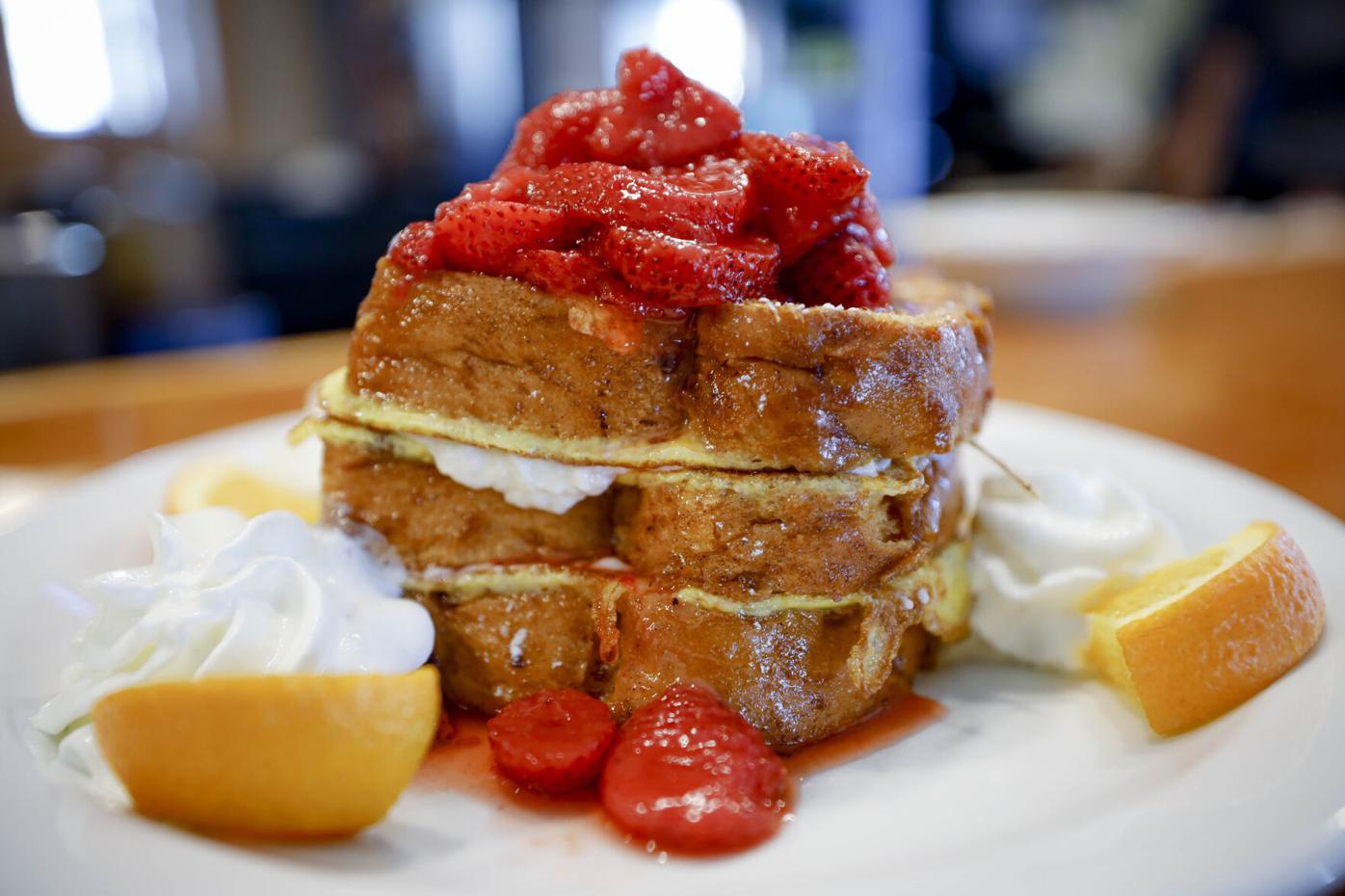 Tracey Lussier comes up with weekly breakfast specials, like this stuffed cinnamon French toast with strawberries. 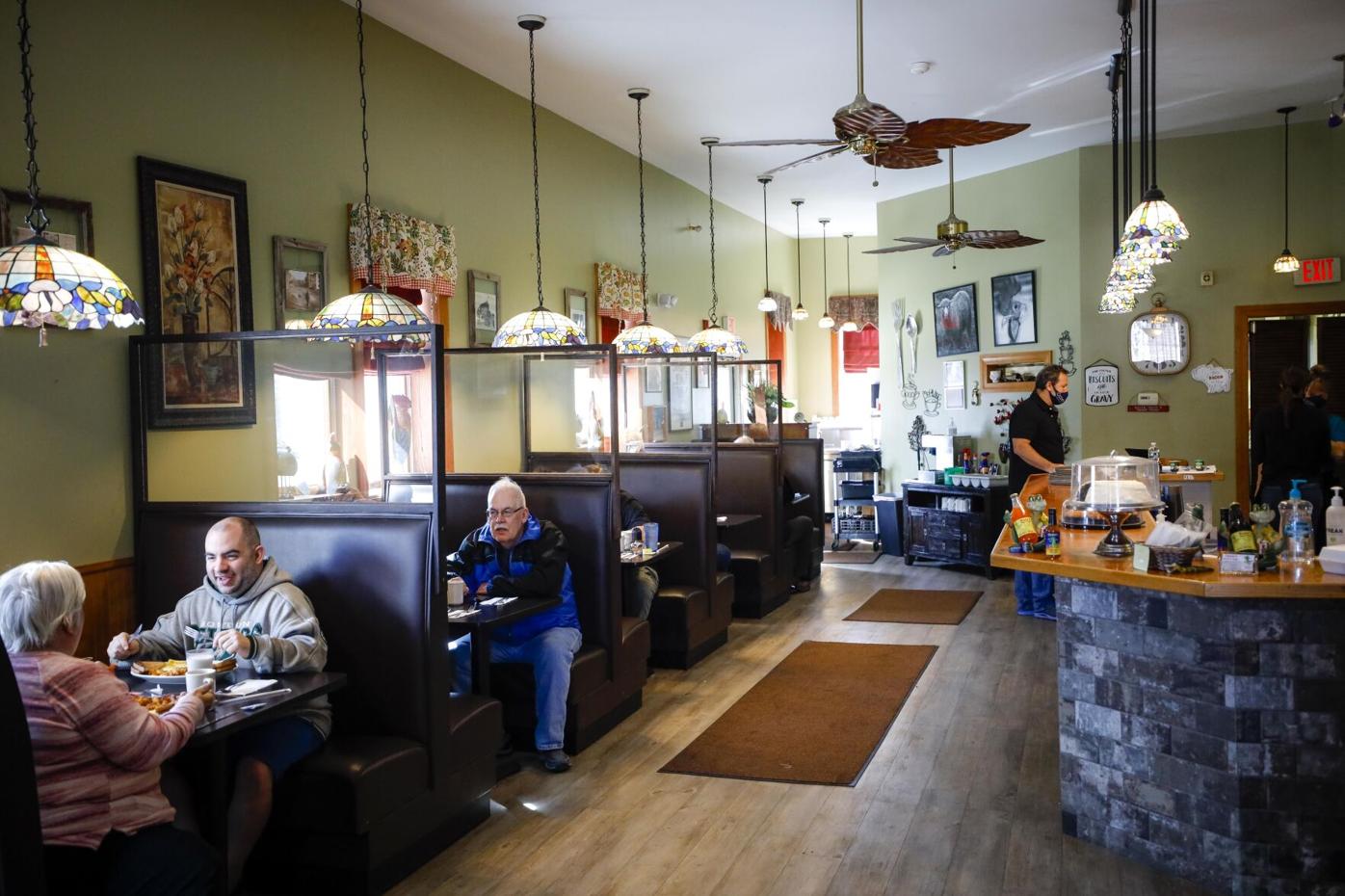 Ozzie’s Steak & Eggs offers indoor and outdoor dining, as well as a food truck during the summer, which helped them stay in business during the pandemic. 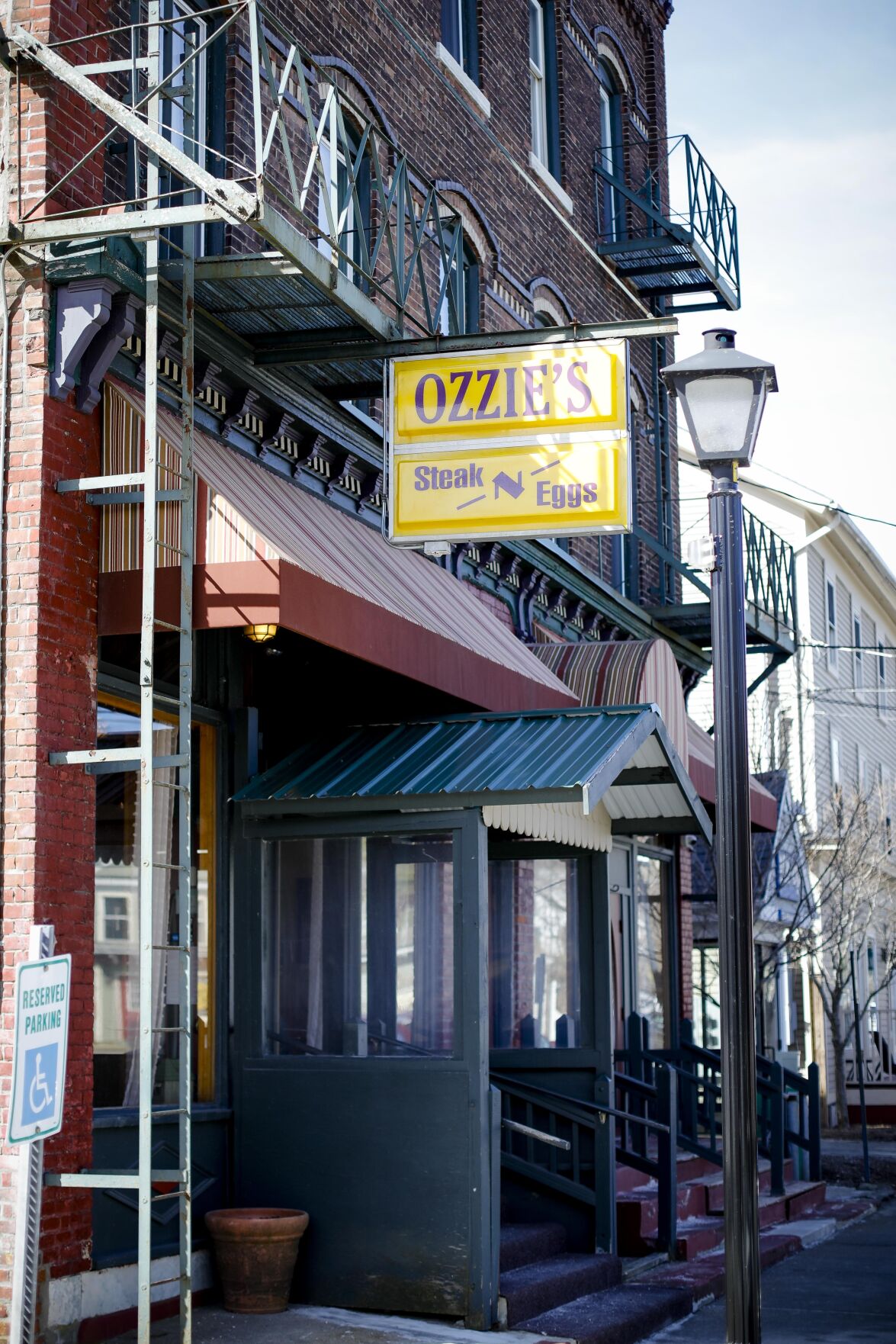 Ozzie’s Steak & Eggs recently celebrated 18 years of being in business.

“We’re proud to be able to say that 70 percent of our staff has been with us since the beginning — from teenage years up to adult — and that’s what customers like to see,” said Tracey Lussier.

HINSDALE — Eighteen years after opening Ozzie’s Steak & Eggs in March 2003, Alan and Tracey Lussier are celebrating more than just being in business that long — they’re also celebrating their customers, staff and surviving a pandemic that shut the doors on many other area restaurants.

“When you’re going into business, you think, ‘What is the one thing that will make it work?’” Alan Lussier said in a phone interview Tuesday. “But it’s not only one thing — it’s hard work, making it work every day; it’s the customers and always taking care of them service-wise, and a key factor is keeping [the restaurant] clean, which customers appreciate.”

Lussier has over 37 years experience in the restaurant business, starting out working as a cook at several different restaurants in the area. “I learned through the years from the chefs and cooks. I picked up everything they knew and used it — and then I trained my own staff.”

He and his now-late mother, Carmella Lussier, opened the Dalton Restaurant on Main Street in Dalton in 1984.

“My mom opened it for me, so I would have a start, and she financed it,” Lussier said. “I ran the back [the kitchen] and she ran the front and did the accounting.”

Prior to opening Ozzie’s, Lussier owned and ran a nightclub, Ozzie’s Depot, explaining it got to be too much for him. “It’s not a good life to lead, staying up until 2 a.m.,” he explained, adding he ran both Ozzie’s for a couple of years, selling Ozzie’s Depot about 15 years ago.

When the couple bought the property that would become Ozzie’s Steak & Eggs, Lussier said it was an old run-down little diner on one side and a laundromat on the other. They gutted and remodeled the whole place, a process that he said took about six months and about $100,000, “which was a whole lot of money at the time,” he said.

“We added an outdoor deck that looks over the river on one side and the other side is where the trains go by,” he said. “It has lots of atmosphere and, with the pandemic, everyone wants to be outside. It’s good to have people inside and out.” He added they will be adding a 20- by 30-foot outdoor pavilion this summer, allowing the restaurant to seat an additional 80 people between the pavilion and the existing deck.

“There are three camps, two lakes and tourists in town in the summer,” he said. “The town triples in size in summer.”

Among the dishes that make Ozzie’s a favorite in the Berkshires, Lussier said, is a chocolate cake originally made by his mom, now made by his mother-in-law, Nancy Gigliotti, and the restaurant’s homemade corned beef hash “that people love.”

Tracey Lussier comes up with one or two specials for breakfast that change frequently — a current one is stuffed cream cheese raspberry French toast. “She’s really good at coming up with stuff. The chefs have to work around what she’s planned,” Lussier said. “I get all the credit [due to his name on the restaurant], but she does all the work ... she’s the boss.”

When the pandemic struck in March 2020, restaurants across the commonwealth were ordered to close. “It was a Sunday night. I wasn’t watching the news, but people were calling, asking what we were going to do,” Lussier said. “I was shocked. I had never seen anything like it in my life.”

Taking advantage of the restaurant’s down time, the Lussiers remodeled the restaurant, adding new floors, chairs, a new face on the bar and new carpeting.

To get through the tough times, they tried offering takeout food for awhile, which Lussier said was “alright for the business, but not the same” as before the pandemic. They also tightened up everything — paying off bills so they didn’t get behind and keeping on as many staff members as they could while keeping control of the overhead and the bills.

“We had outdoor dining — the deck and a tent — as well as two rooms inside,” Lussier said. “We had an awesome summer during a pandemic, thanks to the staff and how they treated customers, the atmosphere of the place, and the quality and price of the food. But the really big thing was the food truck.”

Ozzie’s Food Truck, which made its debut last May, will be going out again soon. While it moved around last year, it will have a permanent home on Dalton Avenue in Pittsfield, at the site of the former Phillips Glass Shop, next to the former Debbie Wong’s and the veterinary practice.

The Lussiers bought the property and plan on putting picnic tables out in front of the building. “We can get power for the trailer from the building, and it adds storage space and bathrooms for the staff,” Lussier said. “It’s a perfect central location, so people can get to us.”

The food truck will have the same menu as last year, including lobster rolls and a new chicken sandwich, which Lussier promises will not be like the fast-food places.

Tracey Lussier attributed the restaurant’s success to its loyal customers. “We’re fortunate to have repeat customers that come up to Hinsdale. We’re on a first-name basis with them and they’re like family.”

She also credits the staff members for the restaurant’s many years in business. “We’re proud to be able to say that 70 percent of our staff has been with us since the beginning — from teenage years up to adult — and that’s what customers like to see.”

She also said they were proud to be located in the town of Hinsdale. “It’s been very supportive. It has a nice small-town atmosphere that has welcomed us.”