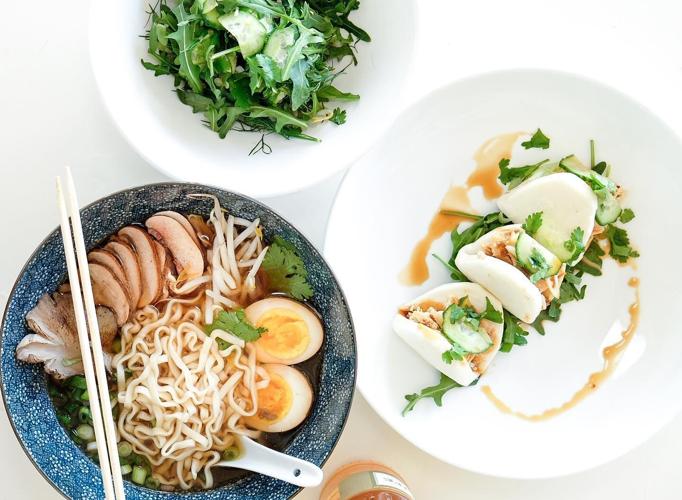 The newly opened Thistle and Mirth in Pittsfield is now offering ramen, steamed buns and an herbed salad. 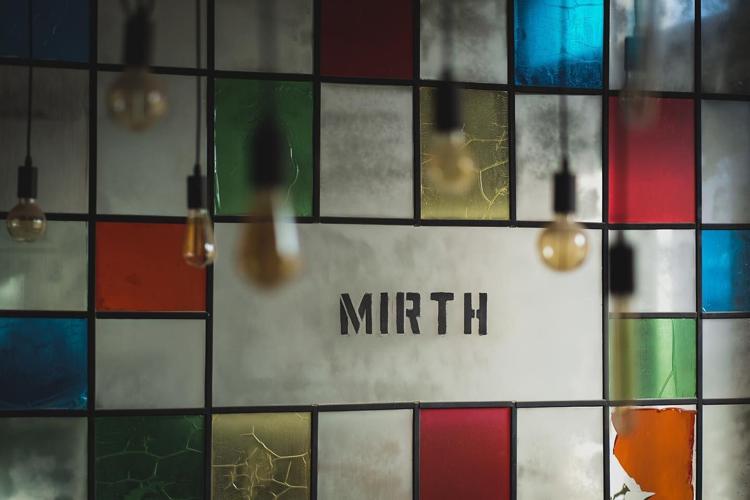 "I firmly believe in Pittsfield and the establishment," said co-owner Austin Oliver. 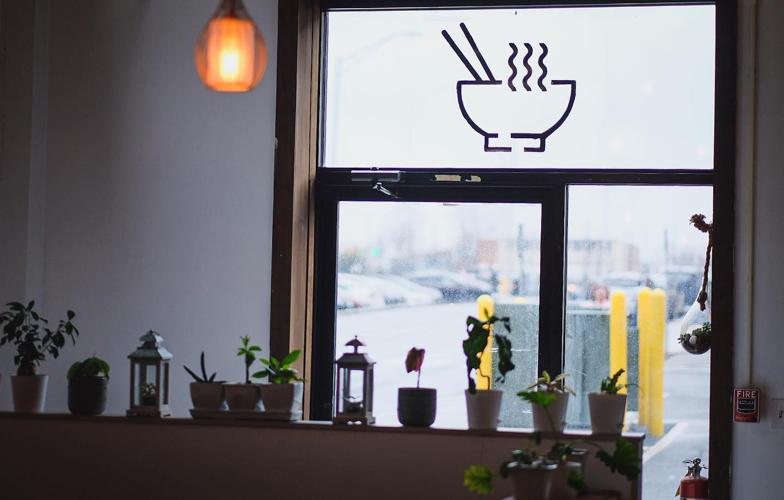 The West Street bar expanded its footprint into the former print shop that was next door to its existing space.

The newly opened Thistle and Mirth in Pittsfield is now offering ramen, steamed buns and an herbed salad.

"I firmly believe in Pittsfield and the establishment," said co-owner Austin Oliver.

The West Street bar expanded its footprint into the former print shop that was next door to its existing space.

PITTSFIELD — After being closed for about a year, one of Pittsfield's iconic bars, Thistle and Mirth on West Street, has reopened — with a new co-owner, added space and a menu featuring ramen.

Austin Oliver, co-owner along with Joe Bowman, said he joined Thistle and Mirth a few months before the coronavirus pandemic hit last spring. "I firmly believe in Pittsfield and the establishment." He said the pub, which first opened about nine years ago, was forced to close temporarily during the pandemic. "We served only alcoholic beverages and the bar was a long corridor. There was no space for a 6-foot path to the bathroom, so we were forced to close." (State-mandated COVID-19 guidelines required that food be served along with alcoholic beverages and the 6-foot socially distancing pathway.)

Oliver previously had operated a pop-up restaurant at the pub for about six months in 2018. After the pop-up shut down, he remained there as a bartender part-time "until the COVID debacle," he said. Prior to working at Thistle and Mirth, Oliver was a chef at Mario's in New Lebanon, N.Y., for five or six years, and before that, worked at restaurants in the Pittsfield area and upstate New York. He received his culinary training at a school in Schenectady, N.Y., in his teens and 20s.

Oliver said he and Bowman weren't idle during the pandemic shutdown.

"The print shop [next door] moved out in August 2020 and we took over the space, which allowed us to meet the COVID regulations," he said, adding they also built out a small kitchenette for serving food.

The addition of the extra space allowed for social distancing and dining room space.

"The expansion was primarily for the dining room space," Oliver said. "A lot of blood, sweat and tears went into that side. The [former] print shop was in no condition for a dining room."

Oliver said the new dining room is in sharp contrast to the bar side of the establishment. "Thistle and Mirth is traditionally dark — it's a late-night bar. All the walls are painted with black chalkboard paint so people can write on them. We wanted the other side to contrast with that."

The dining room is painted white with "a plethora of plants in the windows and on shelves," Oliver said. "It's a very different vibe from the other side that we think is a nice change."

The new menu, Oliver said, is primarily ramen and other Asian-influenced items.

Want to know more about restaurants to eat at in the Berkshires? We'll make sure you're always in the know!

"We thought there was a hole in this area for ramen. People used to have to go 35 miles or more." He said for Thistle and Mirth, with its limited space for a kitchen, ramen was a good direction to go.

Oliver's favorite menu item is the tonkotsu ramen "for the effort that goes into it," he said. "The broth takes 24 hours to finish on the heat alone. It's a great representation of how taking something as simple as vegetables, bones and water can turn into something magical."

"The menu is short and sweet, due to the small kitchen," Oliver said. "We do our best to execute it."

Prices range from $12 for the vegetable ramen with fresh and pickled vegetables to $15 for the duck ramen. The smaller offerings are priced from $6 to $11.

Oliver said the bar is currently offering "great" tap cocktails. "We make them every day in empty kegs, seal the kegs and those are the cocktails for the night." He said there are two or three offered each night; two are kept throughout the season, while the third may change. The current cocktails are a basil cucumber gimlet and a classic rum punch. Beer is also an option. Oliver said although all of the 12 taps in the bar aren't being used, there is a "decent selection" of craft beers and canned beer available.

Because of the nature of the food being offered and the prep work, Thistle and Mirth may close earlier than its current posted hours. "We may close earlier if the food runs out," Oliver said. "However, if people are there or still coming in and the food is there, we may be open later."

As for any future plans, Oliver said, "we're just seeing where this will take us." He added they are looking at possibly serving ramen until the time they are now and then offering snack-type food after for the bar patrons.

"We want Thistle and Mirth to be what it was before," Oliver said. "It's why we kept [the bar side] as it is. We didn't want to change the formula, we just added on."

"We've gotten our bar regulars back," he said. "It was a community-based bar and the customers are glad to be back. We're glad to be offering food that isn't just being offered to meet the [state-mandated COVID] bar regulations. We're putting our best foot forward to deliver the best product we can."

What: Thistle and Mirth

Menu available on Facebook and Instagram. Dine in and limited takeout (must be ordered at the restaurant, no phone orders); no delivery.