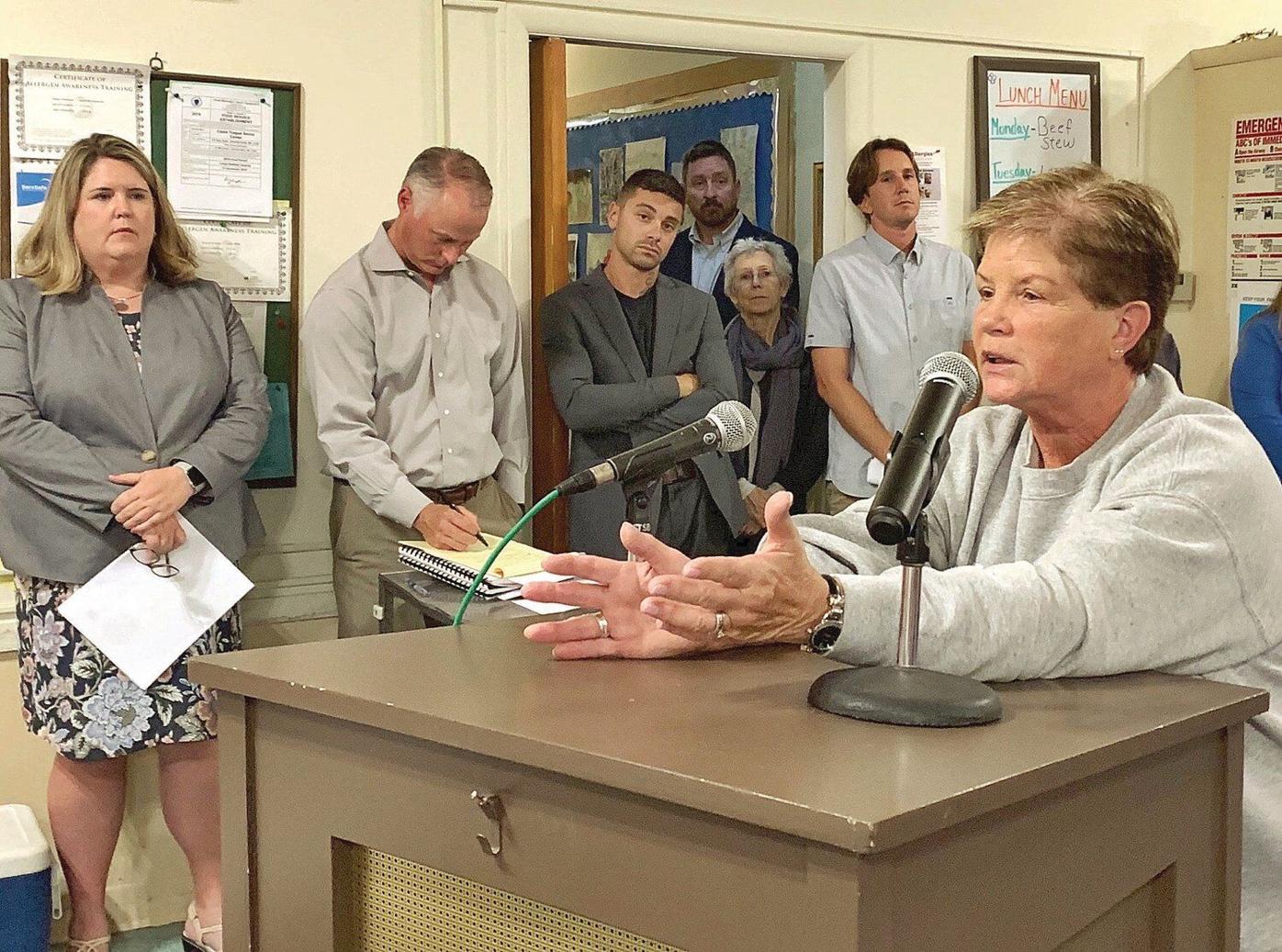 Resident Laura Keefner pleads at a public hearing Monday for the Great Barrington Select Board to reject a proposal for a marijuana cultivation and manufacturing plan. 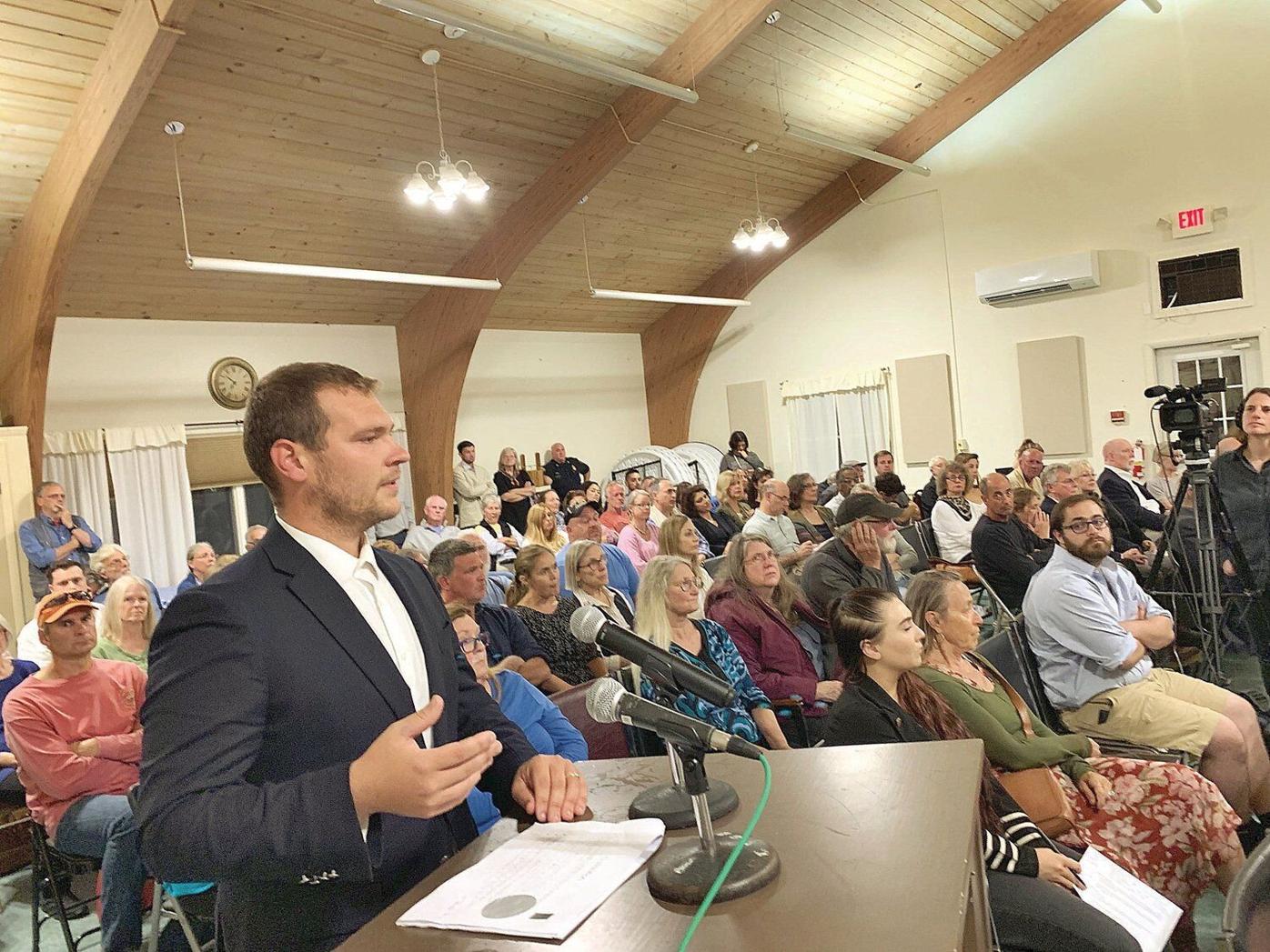 Jerad Lauzier, director of cultivation for Fulcrum Enterprises, describes the seasonal growth and manufacturing process the company plans to use at its proposed facility off Van Deusenville Road in Great Barrington.

Resident Laura Keefner pleads at a public hearing Monday for the Great Barrington Select Board to reject a proposal for a marijuana cultivation and manufacturing plan.

Jerad Lauzier, director of cultivation for Fulcrum Enterprises, describes the seasonal growth and manufacturing process the company plans to use at its proposed facility off Van Deusenville Road in Great Barrington.

GREAT BARRINGTON — Outside, they picketed. Inside, they produced a petition with 300 signatures against the town's first pot farm.

And one by one, they they lined up at the podium to oppose a plan by Fulcrum Enterprises LLC for a marijuana growing and manufacturing operation. No one spoke in favor of the proposal.

It's not pot they're against, residents said; it's the location. And they pleaded with the board to scrutinize Fulcrum's plans more deeply.

The Select Board opened a public hearing Monday at the Claire Teague Senior Center on Fulcrum's request for a special permit to operate the facility on an industrial site off Van Deusenville Road.

The hearing was continued to 6 p.m. Sept. 23 to give the board time to continue its research, and for independent experts — to be hired by the town at Fulcrum's expense — to study the company's odor control and water usage plan.

The worries are far-ranging. Residents who live in the area said they are concerned mainly about odors from the plants, but also about chemicals used to extract their oils, as well as mold spores, water use, property value declines, or other unforeseen problems from industry in its infancy.

One potential neighbor of the business said she would lose her ability to foster children because state regulations do not allow it near a marijuana facility.

Passions ran high, and the gavel was well used.

"Morally, it's a disaster," said Garfield Reed. "I think we're pushing something on people that they don't want. Nobody is really opposed to it. They just don't like where it's going."

Rachel Kelly, who recently moved to Housatonic with her young children, wondered if the odor of flowering cannabis could aggravate allergies, cause headaches, or simply be unpleasant.

"I want to have a laundry line," she said. "Smells are real and I worry about that."

At the hearing, Fulcrum officials outlined their plans to grow the plants in 80,000 square feet of greenhouses with raised beds and organic soil. After an October harvest, the plants would then dry in the manufacturing building and November, the oils would be extracted in a laboratory that meets all safety code and fire department approved.

Jared Lauzier, Fulcrum's director of cultivation, said the May-through-November operation would be shut down for six months of the year when all the matter decomposes, and everything is sanitized by the company's four to 10 employees.

But the problem causing the most angst is one well-known in this industry — the smell of marijuana during its flowering phase between the end of August and mid-October. The company plans to use an odor neutralizer that will be misted into the exhaust by fans in each of the 15 greenhouses.

NCM Environmental Solutions says it runs this system successfully and safely at garbage dumps and cannabis farms, but residents and some town officials are not convinced it will work, and they worry about the long-term effect of chemicals in the mist. NCM officials say the chemicals are biodegradable and safe.

But an attorney for two residents said the town should step carefully where odor is concerned.

"It's a nuisance that invites litigation and problems," said Mitchell Greenwald, questioning NCM's misting method of odor control. "You're going to make these people guinea pigs."

Residents said they have had no success trying to learn whether NCM's system is effective for other cannabis growers.

Jessie Levin, NCM's owner, later told The Eagle his company has worked in the garbage industry for decades, but that to protect himself from competition, he couldn't disclose the locations of his clients.

"It's not cloak and dagger — we're not hiding things," he said.

Pressed by The Eagle, Levin offered the name of his first cannabis customer, Strong Agronomy Management in Watsonville, Calif., which has a similar system.

Angus Mills, president and CEO of that company, told The Eagle on Tuesday the system was designed specifically for his 48,000-square-foot greenhouse, so it would not be exactly the same as what NCM would install for Fulcrum.

He noted there are houses in sight of the greenhouse — he couldn't say how far exactly — and he hasn't heard of any complaints.

But residents remained skeptical and asked for hard proof that the Fulcrum facility won't cause problems. And they told board members they shouldn't be swayed by new tax revenue and fees.

And on this count, several people delivered accusations.

"All that matters to this town is money," said Laura Keefner. "Listen to the people who voted you in. Don't ignore us."

"This is the beginning of the process," he said. "If it takes two or three meetings, then that's what it takes. Not one board member has made up their mind as some of you think."