Wealthy Avenue, seen from East Street in Pittsfield, is among the apple-themed streets that make up the Yankee Orchard subdivision. 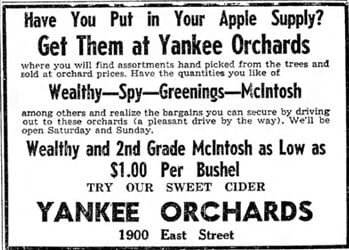 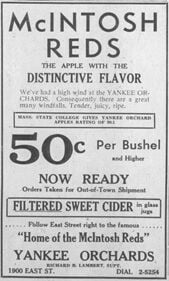 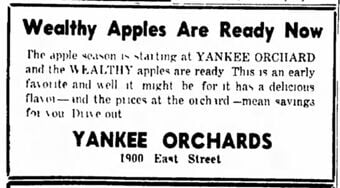 During my childhood in Pittsfield in the 1950s, my folks would often take me to a nearby orchard where they would buy fresh McIntosh apples.

The orchard was off of East Street and Dalton Division Road and was called Yankee Orchards. In 1954 the orchard closed and the following year homes were being built on the 200-acre property, with nearly every yard having an apple tree as a bonus.

At the time Pittsfield was experiencing a huge post-World War II housing boom, with over 300 new homes being built in one year. In the southeast part of the city contractors were mostly naming new streets for their children or other family members.

However, the streets in the Yankee Orchard development were named for the variety of apples once grown there, e.g., Baldwin, McIntosh, Imperial, Wealthy, Winesap, Duchess and Greening. I found the history of the orchard leading up to this development quite interesting. I also learned that Yankee Orchards was actually the location of the geographical center of Berkshire County.

Yankee Orchards was started by a Boston stockbroker, Jesse B. Hubbard, who grew up in Pittsfield. In the late 1800s Jesse inherited his father’s farm at 1900 East Street. Unable to find fresh Massachusetts-grown McIntosh apples near Boston, Jesse decided to grow this apple variety on the family farm.

Jesse hired a neighbor and workers to plant trees and grow the first McIntosh apples in the Berkshires. By the early 1920s over 5,000 trees were growing, including many varieties in addition to McIntosh.

Jesse would come to Pittsfield in June to enjoy the blossoming trees and stay at the farm. He called his place Yankee Orchards and welcomed visitors to share the beauty of the spring blossoms and, of course, buy apples for both consumption and cooking.

Jesse Hubbard died in 1931 at the age of 56, and his son, Clive, a real estate broker in Boston, took over the farm. However, unable to satisfy mortgage payments, Clive had to sell the orchard.

In June 1934, Joseph Turner, owner of a thriving orchard in Hancock, bought the then 6,000-tree Yankee Orchards for $8,900 at a foreclosure sale. The operation was estimated to have cost $50,000 since its inception and the original house (still standing) had been built for $15,000.

In 1939 Turner had proposed and lobbied to the Berkshire Hills Conference to buy the orchard and sponsor an agricultural fair on the property. He promoted the idea to be a tribute to the country’s first fair that took place in Pittsfield in 1807.

Turner had previously been successful in promoting a fair in Hancock for 12 years that ended in 1933 due to the Great Depression. For establishing the fair in Pittsfield, an active group of local dignitaries formed the Berkshire Hills County Fair organization.

Their plan was to have an annual September Fair with exhibition buildings, and harness racing. For the nonfair seasons there would be facilities for a football field, baseball diamond, and track events.

Even with the assurance that only one-third of the apple trees would be removed, the project never got off the ground due to the lack of public support and poor fundraising. Also, the popularity of the historic Great Barrington Fair was no match for creating a similar venue in Pittsfield.

With the end of the fair campaign in 1939, Turner sold Yankee Orchards to Leone Dragone, a prominent local minister who was also a successful real estate developer. Dragone’s son, Joseph, became manager of Yankee Orchards, but the family had plans to eventually develop the property into a subdivision with at least 200 lots for housing.

Leone Dragone died in 1954 at the age of 65 and never got to see the creation of the Yankee Orchard Park subdivision. Joseph ended the apple operations after his father’s death and proceeded with plans to sell 108 lots on 38 acres of the orchard.

Dragone only sold lots to a few contractors and these were purchased quickly. The first new two- and three-bedroom homes were on the market in 1955. Some developers promised an apple tree on each lot and if there was not one, they would plant a tree.

The subdivision had a few obstacles that were overcome in time. One of the most interesting one was in 1956 when a Sheffield beekeeper brought Dragone to court for failure to pay $72 for rental of 12 colonies of bees for past orchard pollination.

By the mid-1980s over 300 homes had been built on the seven apple-named streets on the former Yankee Orchards. In 1975 following years of advocacy by Councilman Henry Marchisio, the city of Pittsfield approved the purchase of 20 acres of the orchard land to create a park and playground for the community.

In 1984 the park was named for Marchisio, who died four years earlier. Developer Joseph Dragone died in 1996 at the age of 80. After planning the Yankee Orchard Park, he had worked to build a tramway and major ski area on Mount Greylock, a venture that never got off the ground.

On Pittsfield visits I like to drive down the apple-named streets and reminisce about the original Yankee Orchards. My numerous visits to the orchard as a youngster has had a lasting effect on me. Macs, as I call McIntosh apples, are still my favorite variety to this day.

Advertisements with Apple Varieties for which Streets in the Yankee Orchard Park Subdivision are named.

Other Advertisements from Yankee Orchards (including Berkshire Eagle Cooking Classes)