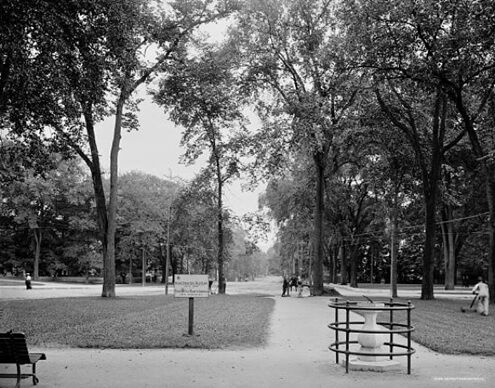 The Park Square sundial was donated June 25, 1903, by the Pittsfield Peace Party Chapter of the Daughters of the American Revolution. It was located in the center of the park, where the famous Old Elm once stood. The view is looking down East Street. 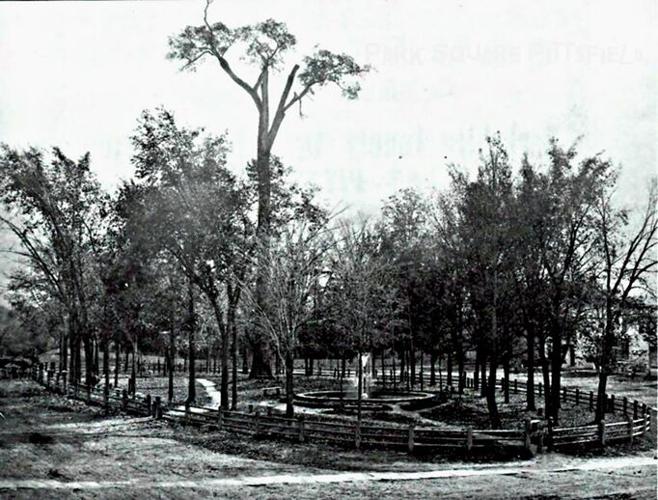 This 1855 photo of Park Square shows the "Old Elm" towering over a few dozen trees. The tree, which was designated in 1752 to be the center of the developing community of Pittsfield, was 128 feet tall, 28 feet in circumference and 9 feet in diameter. On July 25, 1864, the tree was cut down and found to be about 340 years old. 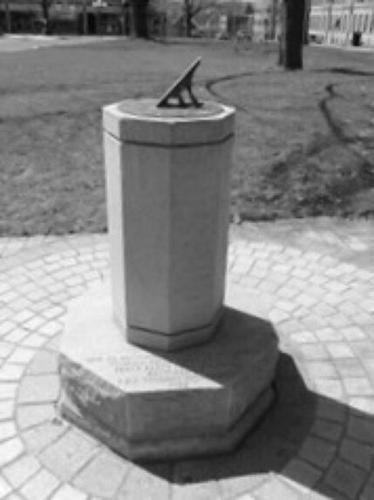 In 1992, after 15 years in storage, the Park Square sundial was given a new base, restored and located in a sunny portion of the park. The original location was in the middle of the park, where the famous "Old Elm" once stood. 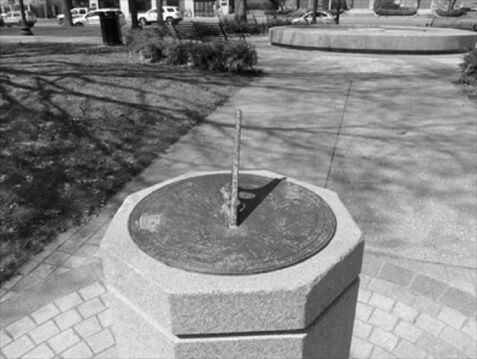 As the sun moves across the sky, the shadow aligns with different numbers and hour lines, which are marked on the dial to indicate the time of day. The Park Square sundial also has an inscribed saying around the hour markings: “Let others tell of storms and showers, I only mark the sunny hours.”

The Park Square sundial was donated June 25, 1903, by the Pittsfield Peace Party Chapter of the Daughters of the American Revolution. It was located in the center of the park, where the famous Old Elm once stood. The view is looking down East Street.

As the sun moves across the sky, the shadow aligns with different numbers and hour lines, which are marked on the dial to indicate the time of day. The Park Square sundial also has an inscribed saying around the hour markings: “Let others tell of storms and showers, I only mark the sunny hours.”

When I was a youngster in the 1950s, I would take the Dawes Avenue bus “up-street” on Saturdays with family or friends. To head home, we would catch the bus at Park Square. The bus would stop behind the red popcorn wagon at East and North streets.

The name Park Square came to describe all the buildings and businesses surrounding the actual park. In 1975, the area received recognition by the National Register of Historic Places as the Park Square Historic District.

In fifth grade, when I rode buses alone to and from Park Square, I would come early for the bus ride home and visit the park itself. Often, I would buy a 5-cent bag of popcorn from the red wagon and then sit on a bench in the park, munch the treat and feed many of the city’s resident pigeons.

Before being called Park Square, the park had various names, including the Green, Wendell Square, Municipal Square, City Hall Park and the Meeting House Common. Ironically, this park is not square at all, but it is oval-shaped, which better accommodated traffic around it. The grassy island always had many beautiful elm trees providing shade for the 1.5 acres.

One of my favorite “rituals,” when I had the time, was to look at the sundial in the very center and compare the time with the big clocks on the nearby First Church of Christ and Pittsfield National Bank. I was amazed at the accuracy.

Sundials are composed of two parts, the base, or flat part, is the dial, and the piece that casts the sun’s shadow on the plate is called the gnomon. (The “g” is silent.) As the sun moves across the sky, the shadow aligns with different numbers and hour lines, which are marked on the dial to indicate the time of day.

The Park Square sundial had a great saying inscribed around the hour markings: “Let others tell of storms and showers, I only mark the sunny hours.”

This circular bronze timepiece (13 inches in diameter) and its Vermont marble pedestal (2 feet, 9 inches tall) were gifts from the local Peace Party Chapter of the Daughters of the American Revolution. The organization worked with the city to plan a formal dedication ceremony June 25, 1903.

The sundial was located in the very center of the park, where a historic tree, known as the “Old Elm,” once stood, towering above several dozen smaller trees. A brass plate identified the date of the dedication ceremony, the donor organization and the recognition of the elm tree.

The speaker at the dedication was one of Pittsfield’s most prominent citizens, William R. Plunkett, who was a leader in financing, commercial and cultural elements of the city. Plunkett was known for writing well-crafted papers, one of which was “The Old Elm.” At this dedication, he shared with attendees the importance of this tree and its history and why the sundial was placed where the tree had been.

In 1752, the massive elm tree was designated by the town planner/surveyor, Capt. Charles Goodrich, as the center of the town yet to be called Pittsfield. Four roads were planned from the point of the tree that were to be named for the four compass directions leading to the park. In his plans, Goodrich altered the future East Street to accommodate this tree.

After the Revolutionary War, Pittsfield had grown from 200 to 2,000 residents and a new, large meeting house was needed. In 1790, the city’s forefathers chose to build the new structure where they would have to remove the tree. The towering elm had already been damaged by lightning, and leaders felt it should come down. The elm was reported to be 128 feet tall, 28 feet in circumference and 9 feet in diameter.

As history records, a passionate resident, Lucretia Williams, saved the tree by putting herself between the hired ax man and the tree before he could strike a fourth ax blow on the trunk. Lucretia was the wife of a prominent lawyer and influential community leader, John Chandler Williams. To save the tree and set things right, Williams gave the city more than sufficient land he owned around the tree to construct the new meeting house.

The mighty elm remained for another 40 years, towering over several dozen or more smaller trees. However, after several lightning strikes, the mighty elm became shaky and dangerous. When it was taken down July 25, 1864, it was determined by microscopic analysis to be 340 years old, dating it to as early as 1524.

For over 70 years, the sundial remained in the center of the park, with not many changes, other than the replacement of a low fence around the pedestal. However, in the mid-1970s, vandals had damaged the pedestal and stole the sundial itself.

Fortunately, the sundial mysteriously reappeared eight months after it was taken. In 1976, Pittsfield’s mayor, Evan Dobelle, asked the Parks Department to restore the historic timepiece. City workers moved the sundial with pedestal and put it in storage for future restoration. It remained in storage for 15 years and was all but forgotten.

In 1991, three Pittsfield High School students, doing a history project on Pittsfield monuments, located the sundial in an outbuilding at the Springside Park House. The students worked with local contractors to restore the sundial and its broken base. In 1992, the famous sundial was returned to Park Square, but no longer in the place of the historic elm tree. The DAR organization had indicated that a different spot was needed, as the shade of trees would not allow the sun to reach the dial.

I do miss those days of sitting on a Park Square bench with my popcorn and the resident pigeons. However, when I visit my hometown, I still enjoy going to the park and looking at the time on the sundial.

Jim Shulman, a Pittsfield native living in Ohio, is the author of “Berkshire Memories: A Baby Boomer Looks Back at Growing Up in Pittsfield.” If you have a memory of a Berkshire baby boom landmark, business or event you’d like to share or read about, please write Jim at jesjmskali@aol.com