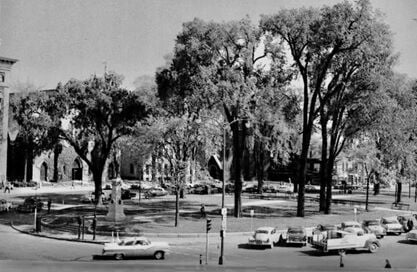 Autos circled Park Square and parked along both sides during the baby boom years of the 1950s. Most of the park’s towering elm trees were about 150 years old when they all were removed from 1954 to 1976, because of Dutch elm disease. Replacement trees have brought back shade and beauty to the park during the past 50 years. 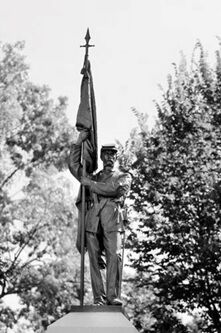 Park Square’s Civil War statue of a Union soldier bearing a flag was created by Launt Thompson, a well-known sculptor of famous figures. The monument recognizes 108 local soldiers who died in the war.

In an earlier column, I shared memories of Pittsfield’s Park Square, its famous “Old Elm” tree and the sundial originally placed at the former location of the tree.

The oval-shaped park has been the site of many memorable events and landmarks over the years. From my childhood days in the 1950s and ‘60s, I remember the other park monuments, as well as many events and even controversies involving the historic park.

During those early baby boom years, the use of Park Square was tightly controlled by city leaders. In fact, very, very few temporary items were permitted on the oval.

The handful of permanent items included a plaque recognizing John Williams, who donated much of the parkland to the city in order to preserve the famous, towering Old Elm. His donation allowed the leaders to build the Town Hall in 1832, across from the park, where it still stands today.

There was also a bronze plaque to commemorate the first agricultural fair in the country, held in the park in 1810. The plaque recognizes Elkannah Watson, who staged the fair with the goal of stimulating competition and use of best practices in agriculture.

The most prominent park memorial is the Civil War statue of a flag-bearing sergeant. This piece was the work of well-known sculptor Launt Thompson, of Albany, N.Y. It was dedicated on Sept. 24, 1872, to recognize the ultimate sacrifice made by the 108 local Union soldiers.

The dedication event was attended by an estimated 25,000 people, including 2,000 veterans who were also honored with a special dinner. This was one of the largest gatherings ever held at the park.

This bronze monument was actually cast from the metal from Civil War cannon barrels. (Interestingly, a Civil War cannon that was once a memorial at the park was sent to Boston in 1942, for the scrap metal drive during World War II.)

The only other monument at the park, that I recall, was a plaque in memory of Sgt. Edward Burns, the first Pittsfield soldier to lose his life in World War II. This occurred at Wheeler Field, in Hawaii, during the attack on Pearl Harbor on Dec. 7, 1941.

Actually, a tree was planted first in the park in memory of Sgt. Burns. The marker has since been relocated to Memorial Park at Colt Road.

It had been many years before another permanent monument was added to Park Square. In 1986, a Vietnam War memorial was placed in the oval.

When it came to temporary displays, the Christmas holiday items were always a tradition in December. It was an honor for a family to donate an evergreen tree to be decorated that was set up and adorned with large ornaments and wooden boxes beneath it that were wrapped as gifts. The trees, usually spruces, ranged in height from 20 feet to over 45 feet.

As far as I could tell, this tradition began in 1928. Before my time, there were some years that were skipped altogether, and in earlier years some trees were actually purchased by the city. When I was younger I recall an unpopular decision to use a plastic tree, and in the 1950s a live tree was another short-lived effort.

I always remember that, near the tree, there was a large creche or Nativity scene. In 1989, the creche was moved to nearby St. Stephen’s Church. Some people felt that such a display for specific religions should not be in a public park. Members of the clergy felt that a religious display should not be next to a whimsical Santa Claus display that had been set up by the creche.

Pittsfield’s leaders only recognized a few other temporary annual displays, like a snow sculpture for the Pittsfield Winter Carnival, a display “thermometer” for the Community Chest fall fundraising campaigns, patriotic flag displays and periodic band concerts. Political signs, commercial advertising and selling of items at occasional art shows were forbidden.

When band concerts and choral events were held on “our village green,” they were usually on makeshift stages. There was never a permanent bandstand at the park, but one stood from 1886 to 1912, on Bank Row between the courthouse and former athenaeum. This structure was moved to The Common in 1912. In its place, the city eventually had a tourist information stand for years.

For many years, Scouts had city-approved displays on the oval, like a tower made of logs, and Scout camping and craft demonstrations. My favorite was when the Boy Scouts cooked complimentary pancakes at a campout display.

During Pittsfield’s bicentennial celebration in 1961, a group of 35 men called the Bearded Brothers of Berkshire concocted a scheme to have men grow beards for the year of celebrations. Their scheme was to put nonbearded “offenders” in wooden stocks or a small wooden stockade-type jail that they located near the Civil War statue.

These humorous items were used a month earlier, in Great Barrington’s bicentennial events, without a hitch. However, Pittsfield’s Park Department nixed the structures and permanently removed them within a few days.

In the mid-1800s, there was a fountain in the park that actually had water piped 15 miles from Ashley Reservoir. It was long gone when I was a youngster. Park Square’s current fountain was planned for America’s bicentennial in 1976. Ironically, the fountain had to be tweaked after installation, as it jets sprayed water all over. For many years, kids could be found wading in the waters and, if lucky, could end up in a newspaper photo.

The 1976 bicentennial events planned by the city included the planting of new trees around the park. The many beautiful elm trees, I remember as a kid, became victims of the dreaded Dutch elm disease, from a fungus spread by the elm bark beetle.

From 1954 to 1976, all of the 15 or so 150-year-old elms had been removed due to the disease. The controversial use of the insecticide DDT to control the disease divided many citizens concerned about the adverse impact on the environment and human health risks. (Its use was totally banned in the U.S. in 1972.)

The city also lost hundreds of beautiful elms lining many of Pittsfield’s streets. It is nice to see that, in nearly 50 years, the park has beautiful shade trees once again.

There are undoubtedly many other memories readers will recall of activities around the park, and some of the artwork appearing in the past 50 years. However, it is a good thing that leaders have preserved the beauty of the park without overcrowding it with too many items.