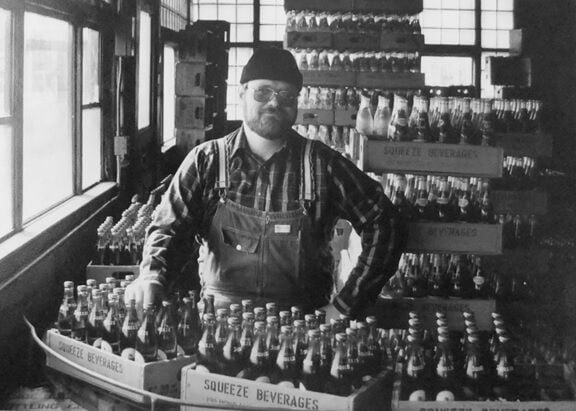 Owner Ted Gwozdz at work at Squeeze Beverages at 190 Howland Ave. in Adams. The family bottling business was started by his grandfather in 1917 and operated until 2004 when it was bought by a national beverage firm. 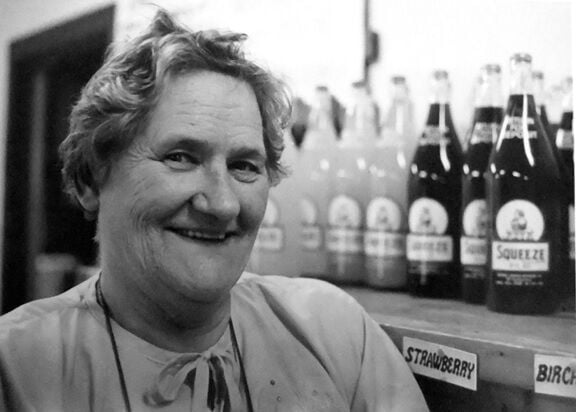 Stella Gwozdz worked in her family’s Squeeze Beverages business for over 50 years while raising 12 children including Ted, who took over the company operations in the 1970s. Stella worked in beverage production and did the bookkeeping into her 90s.

Squeeze Beverages' label featured a drawing of a boy and girl sitting on a bench hugging.

As a youngster one of my favorite sodas was made by the Squeeze Co. in Adams.

When I was old enough to drive, I would often stop by to get a 24-bottle case or two of Squeeze’s sugared and non-sugared flavors.

Squeeze distribution was initially limited to nearby locales through home deliveries, restaurants and some groceries. Folks from Pittsfield and South County would usually have to go to the plant store to buy Squeeze beverages.

On a visit to Pittsfield almost 20 years ago, I was saddened to learn that the company had been sold and the plant closed.

I have fond memories of this small company, its owner, Ted Gwozdz (pronounced “Gavoosh”), its office paneled with the sides of old Orange Squeeze cases and the antiquated, noisy bottling equipment.

Ted once showed me the bottling operation, with the machine sending sterilized bottles chugging and clinking on a conveyor belt. Along the way a pipe from a tank on the second floor would squirt flavored syrup into each bottle. Another machine then filled the bottles with carbonated water and sent them to a capping apparatus.

The next step involved manual shaking of each bottle to blend the syrup and soda water. Each bottle was closely inspected, with four bottles at a time held up to the light and then placed in the 24-bottle wooden crates. It truly was a mom and pop operation.

What made Squeeze uniquely flavorful was the use of pure cane sugar and special flavorings from all over the country. Most soda companies used cheaper corn syrup and fructose that could leave a starchy or dry after taste. The Mount Greylock water also gave the product a fresh taste. The soda itself was always reasonably priced compared to other national brands.

Squeeze actually had its beginnings in New Orleans, where the National Fruit Flavor Co. started in 1917 and franchised the beverage. The company contracted with local bottlers throughout the U.S. and five foreign countries to produce and sell its main product, Orange Squeeze. There was apparently no charge for the franchise itself and the agreements were “in perpetuity.”

However, syrups had to be purchased from the parent company and the franchiser would also help the independent bottlers obtain bottles, bottle caps and other supplies. Well-known bottlers like Coca-Cola often had an Orange Squeeze franchise as well, primarily for the orange and other flavors.

In 1904, Ted’s grandfather, Piotr (Peter) Gwozdz, was one of 1,500 workers that the Berkshire Cotton Manufacturing Co. in Adams brought over from Poland to work in their growing factory. After meeting his obligations to the company, Piotr wanted to go into his own business.

In 1911, he and a partner opened a grocery and soda bottling business at 1 East Hoosac St. Their initial products included bottled seltzer and mixes for cocktails. In a few years they moved to 104 Summer St. and in 1920 obtained the franchise for Orange Squeeze soda.

With their semi-automatic approach, using an old carbonator and a lot of manual labor, two people could produce about 100 cases a day. In 1923, the partnership ended and Piotr kept the soda business. He and his wife, Bronislawa, lived upstairs in the Summer Street building where they raised nine children (two sons and seven daughters).

During World War II, a sugar shortage forced the family business to temporarily stop making soda. After the war, the bottling began again and in 1947 the business moved to 190 Howland Ave. When Piotr died in 1956, his son Stanley took over the Orange Squeeze Co. and added some new equipment including a bottle washer and a filler.

Flavored soda became highly popular in the U.S. during the war. Hence, Stanley’s investment in new equipment was a good decision that allowed him to diversify by adding many new flavors in addition to the orange soda.

By the late 1950s and early 1960s, the franchise arrangements with the National Fruit Flavor Co. began to dissolve and soon Stanley was buying his syrups from all over the country introducing some unusual flavors. In 1975, Stanley’s eighth child, Ted, joined his father in the small company. Business grew as the soda was now available in more stores and restaurants in the Berkshires as well as at the plant store and through home delivery.

Stanley died in 1978 at the age of 64. His wife Stella and their son Ted continued running the company. Ted had taken over the operations while his mother assisted in both manufacturing and in doing the books. Stella died in 2009 at the age of 94, working in the company for over 50 years and raising 12 children.

Ted changed the name of the company from Orange Squeeze to Squeeze Beverages in the 1970s. The bottles identified the soft drinks as Squeeze with a drawing of a boy and girl sitting on a bench hugging with a full moon in the background. The hug symbolized the “squeeze” and was based on a 1926 Saturday Evening Post cover by Norman Rockwell called, “Little Spooners” or “Puppy Love.”

In the 1980s Ted added an automated mixer, a labeler and an accumulating table for the bottles to go around at the end of the production line. On a good day, Squeeze could do as many as 400 cases of soda and an average of 70,000 to 100,000 cases a year.

In 1993, Ted got a new partner named Frederick Devereaux III, who helped Squeeze expand production and distribution. An agreement with a distributor increased sales fourfold by 1997 with distribution throughout Western Massachusetts, Southern Vermont and into Worcester and Boston areas.

Although Squeeze became a boutique drink, entered a bigger market and farmed out much of its bottling, the 70-year-old company lost its unique mom and pop charm with its wide variety of offerings.

In January 2004, the owners decided to sell Squeeze to a growing Florida-based soft drink company by the name of X-Stream Beverage Group. Thus, the last of the Berkshire soda bottlers came to an end.

Ted Gwozdz became a truck driver/hauler and remodeled the plant to serve as his residence. When we last got together several years ago, he said he missed his old company, but not the amount of work and stress that accompanied it in later years of big business competition.