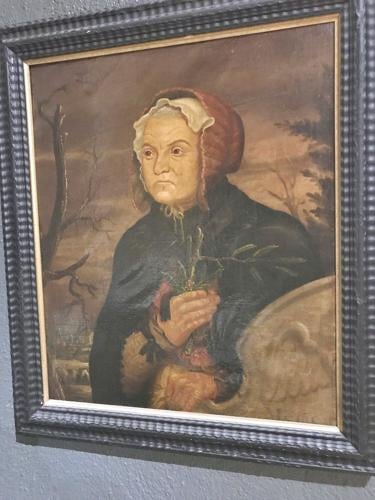 The oil painting "Susan Dunham" by artist George Williams was originally donated to the Berkshire Athenaeum by Mary P. Buell and her sister, Mrs. H.J. Warriner in October 1888. The sisters had inherited the painting from Col. S. M. McKay. It now hangs in the Berkshire Museum. 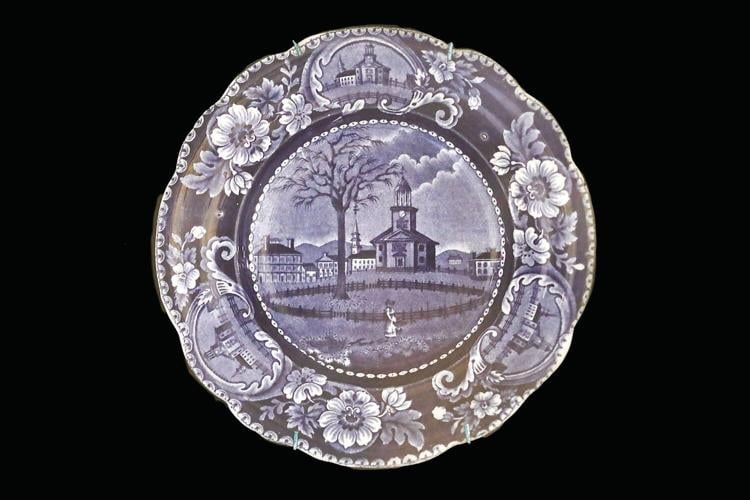 Susan Dunham, known locally as "Crazy Sue," is said to be the woman pictured with the Pittsfield Elm in "Winter View of Pittsfield," on this blue Staffordshire china by James Clews.

The oil painting "Susan Dunham" by artist George Williams was originally donated to the Berkshire Athenaeum by Mary P. Buell and her sister, Mrs. H.J. Warriner in October 1888. The sisters had inherited the painting from Col. S. M. McKay. It now hangs in the Berkshire Museum.

Susan Dunham, known locally as "Crazy Sue," is said to be the woman pictured with the Pittsfield Elm in "Winter View of Pittsfield," on this blue Staffordshire china by James Clews.

SAVOY — "She must have been beautiful once, for weatherbeaten as she is, she is very fine looking, and her straight nose and black bright eyes bear evidence of better days ... She is amazingly active and strides about constantly all over the county through she is over sixty. She thinks a good deal of her immortalization by Miss [Catharine] Sedgwick as 'Crazy Bet' [in 'A New England Tale']."

Fanny Appleton Longfellow was not wrong in her assumptions about Susan Dunham, whom she met during a visit with her mother's family, the Golds, in Pittsfield during the summer of 1835. Dunham, known by the unfortunate moniker of "Crazy Sue," was supposedly, once, the belle of Savoy. And time had taken its toll on the woman, who spent some 50 years traveling the Berkshires, from one end to the other, on foot — dining and lodging with some of the county's most prominent families. (Those families included the Sedgwicks of Stockbridge, Gov. George N. Briggs in Adams, The Golds and Plunketts in Pittsfield, the Tylers in North Adams and the Curtis family in Lanesborough.)

"No fairer human being ever blossomed out into maidenhood upon these hills than she, or lass more pretty, pert and quick-witted," The Berkshire Hills, reported in an article, "Sketch of Crazy Sue: A Remarkable Berkshire Character of the Past," that ran in its October 1900 issue.

Unfortunately, there are no known portraits of Dunham in her youth to ascertain if the tales of her beauty are true. There is but one confirmed image of Dunham that exists. The image, an oil painting by American artist George Williams, believed to be from 1852, shows a woman similar to the 1835 journal entry's description. The painting, now hanging in the Berkshire Museum, was donated to the Berkshire Athenaeum by Mary P. Buell and her sister, Mrs. H.J. Warriner in October 1888. The sisters had inherited the painting from Col. S. M. McKay, who had purchased it from the artist.

Appleton Longfellow, who married Henry Wadsworth Longfellow eight years after her encounter with Dunham, had written in her journal how she had hoped the eccentric woman would pay a visit during her stay. She described their first encounter on July 13, 1835, as somewhat disappointing: "[Dunham] was not so frantically demented as I expected, but rambled on, a thousand thoughts pushing away others half formed, with now and then a shrewd 'hit' at matters and things. Religion is her main topic, which she seems to view more rationally than many sounder heads ... She sung us an old ballad, of a youth crazed for love, pretty much her own story as I supposed, though she gives a much more rational and less romantic cause for her madness, namely that it runs in the family."

The young woman's fascination with and subsequent disappointment in meeting "Crazy Sue" most surely comes from the multitude of stories that circulated about her eccentric behaviors — ranging from playing tricks (getting people to pray with their eyes shut and making off with a food item) to infants being carried off to be placed with "better" families. Stories of Sue's antics poured into the editorial offices of The Berkshire Hills, following a request published with the story in 1900 — 48 years after her death.

In one account published by The Berkshire Hills, it was said that Dunham "became so fond of babies in cradle, that she imagined their mothers were not giving them proper care and tried to ameliorate this condition by transferring them herself to the homes of those of her friends who had no children." The children, when discovered missing, were quickly recovered by their parents from those she had left them with.

She was known for pilfering small items from homes, that would turn up in other houses, and she was quick with witty replies and scripture verse for those who would tease her. She was a devout attendant of all the county's churches, and had a habit of standing vigil at the gravesides of young men she did not know. She refused to hold her tongue and spoke her mind, showed kindness to those who she felt deserved it and let those whom she despised, know it.

According to several sources, a group of boys in Adams once taunted Dunham by asking the spiritually devout woman if she had heard the devil had died. When she asked when, the boys replied it had happened the day before yesterday. She smartly replied, "How sorry I am for you, his poor, fatherless children," leaving the boys shocked as she hurried on her way.

It seems townsfolk from North Adams to Stockbridge put up with her antics and didn't feel the need to punish her with more than a scolding. Perhaps, it was because they felt sorry for the woman, who many believed was driven mad by the loss of her betrothed, as Sedgwick so postured in her novel. Some believed she had no family and others believed if they just took her in, they could save this "wild woman."

Dunham, most likely suffered from a form of mental illness, as her family reported to The Berkshire Hills that she had "high spells" filled with manic rantings and the inability to keep still. It was during these "high spells" she took to the road, wandering across the county, pilfering trinkets, pocketing food and engaging in her antics. During her "low spells" she returned home, was quiet and lamented what she had done during her "high spells."

One of 12 children, Dunham, born in Tisbury on July 4, 1768, arrived in Savoy with her family shortly after 1800. It is said her illness coincided with two events. First, according to a family member, her engagement to a young man was called off for political differences — her father was a Federalist, her betrothed's father was not. Second, the family, became involved with either the "New Light" revivalists or the Shakers that settled in Savoy. Whatever the real cause was, it was said to have triggered something in the young woman and she was never the same afterword.

In 1850, Dunham decided to settle down. She moved in with one of her brother's families in Windsor, after hearing the voice of God while keeping vigil at a young man's grave. (In reality, it was the voice of one of the young men trying to scare her during her vigil.) On Dec. 14, 1852, at the age of 85, she died at the home of a relative in Pittsfield. Her cause of death was listed as "old age." Her funeral, overseen by the Rev. Samuel Harris and held at the South Congregational Church in Pittsfield, was said to have caused the church to "overflow" with people.

Dunham may not have had a place of her own, but it appears she was never homeless or friendless during her time.