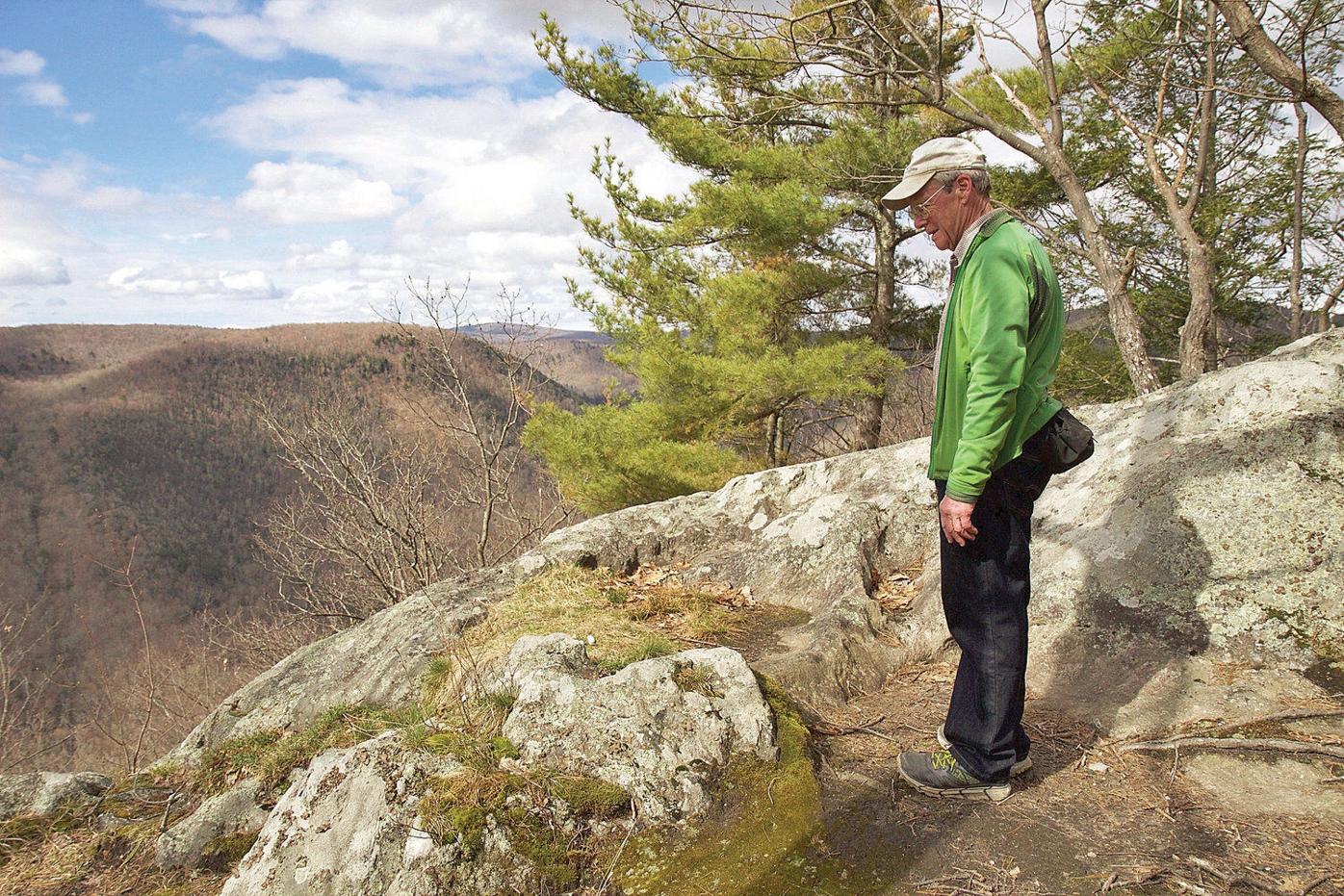 Lauren Stevens, former Williams College English professor, researched and mapped the original indigenous footpath in the Mohawk Trail area in 1992 with a group of Williams students. 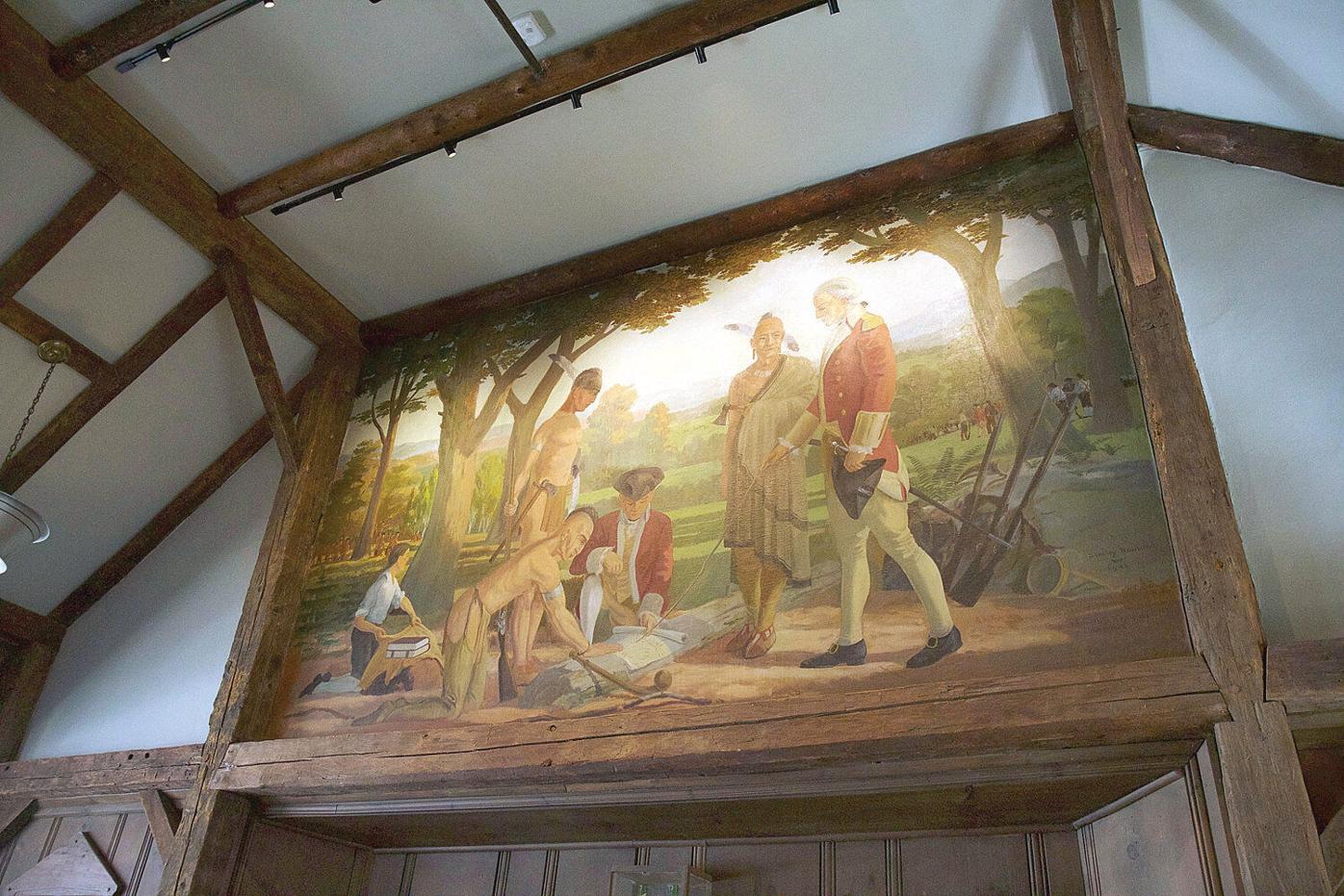 When The Log in Williamstown reopened in 2015, some students and faculty were alarmed to find this 1942 mural by Stanley Rowland, which depicted Colonel Ephraim Williams and "King Hendrik" Theyanoguin, a Mohawk leader. Today, the college is working to add context to the painting and its relationship to the college's history. 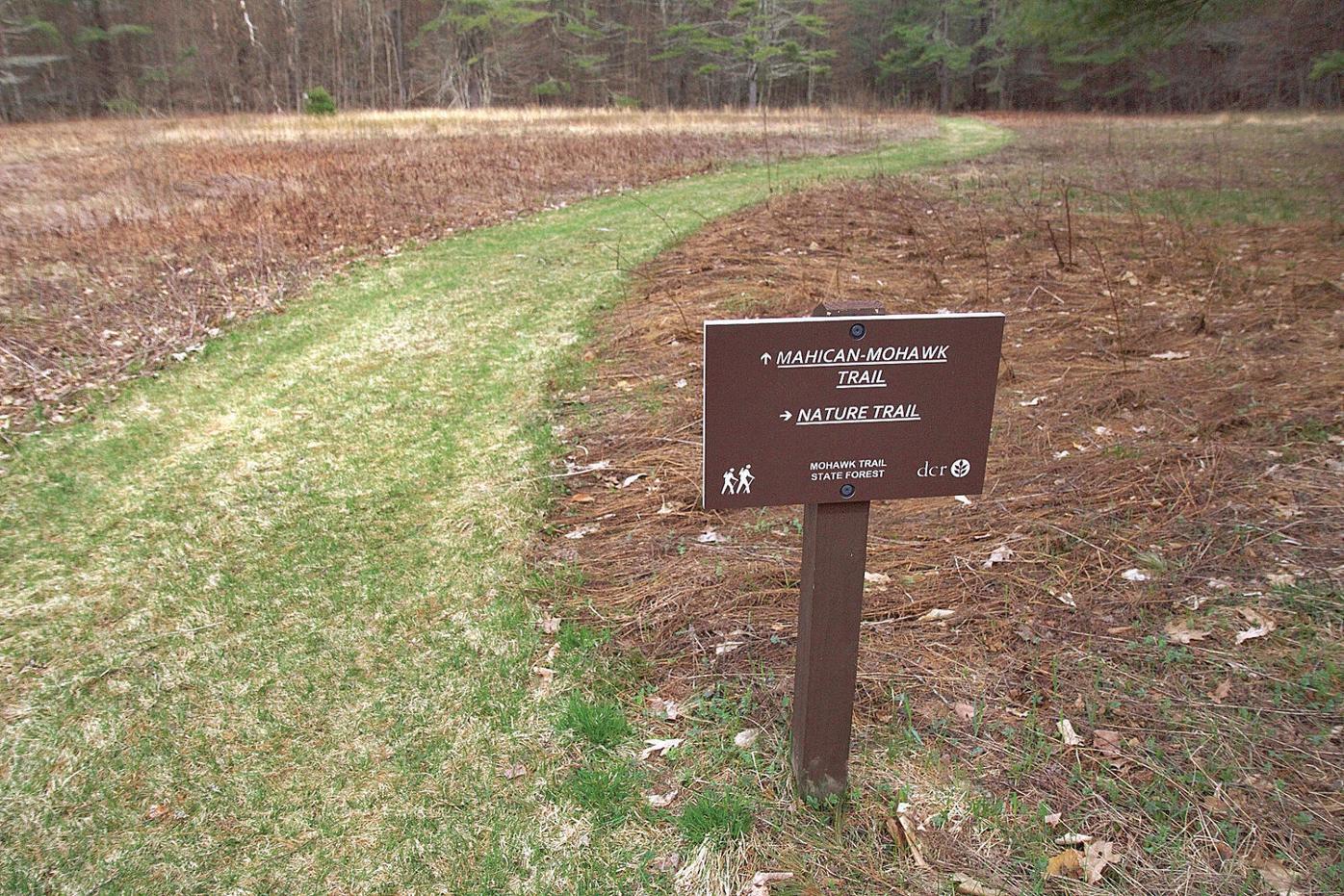 The 100-mile route that was the original indigenous footpath in the Mohawk Trail area has been named the Mahican-Mohawk Trail by Lauren Stevens. 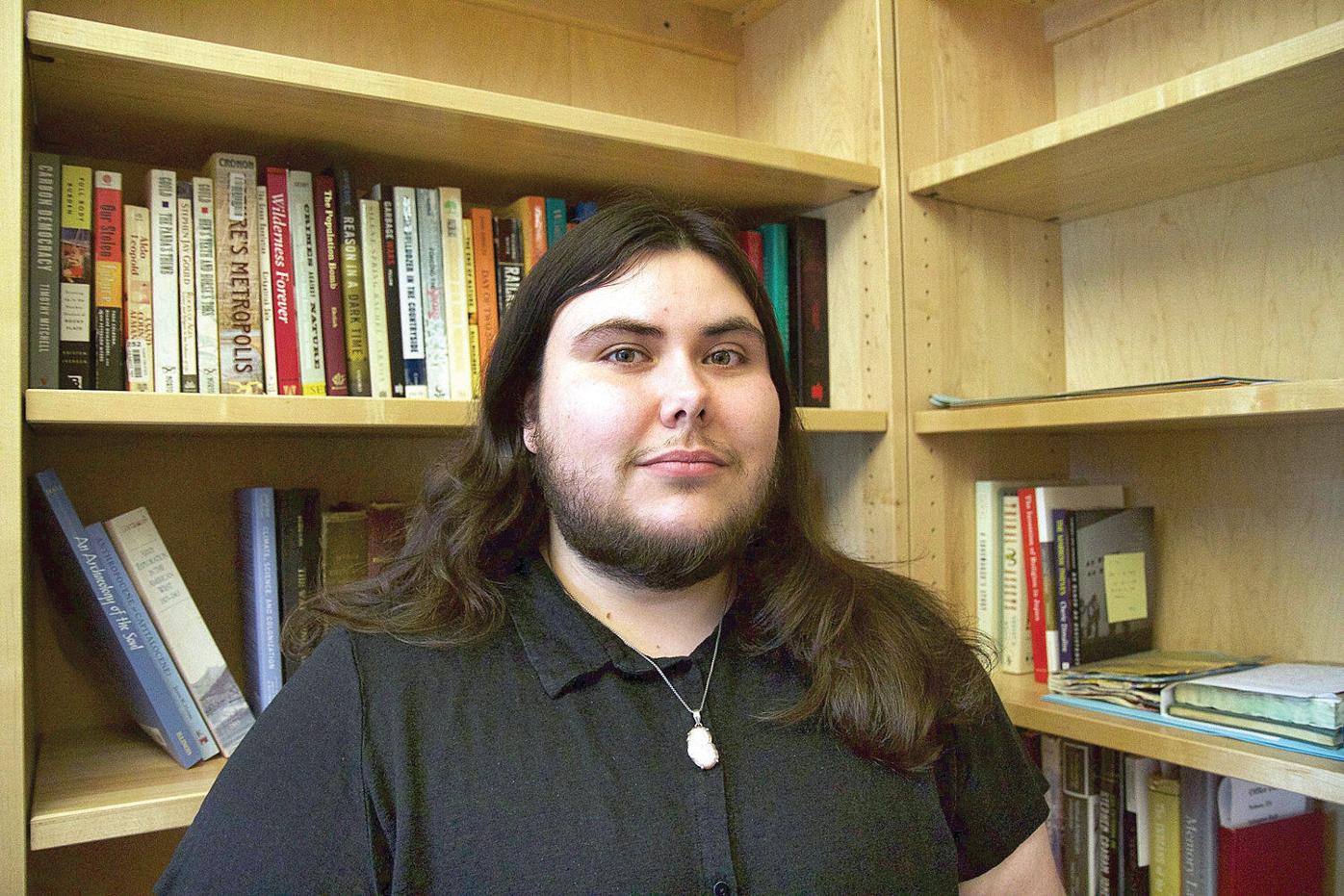 Eli Nelson is an assistant professor in American Studies at Williams College, where he is the only indigenous scholar.

Lauren Stevens, former Williams College English professor, researched and mapped the original indigenous footpath in the Mohawk Trail area in 1992 with a group of Williams students.

When The Log in Williamstown reopened in 2015, some students and faculty were alarmed to find this 1942 mural by Stanley Rowland, which depicted Colonel Ephraim Williams and "King Hendrik" Theyanoguin, a Mohawk leader. Today, the college is working to add context to the painting and its relationship to the college's history.

The 100-mile route that was the original indigenous footpath in the Mohawk Trail area has been named the Mahican-Mohawk Trail by Lauren Stevens.

Eli Nelson is an assistant professor in American Studies at Williams College, where he is the only indigenous scholar.

Former Williams College English professor Lauren Stevens helped history major Robert Quay with his 2004 senior thesis, "Mohawks, Model T's and Monuments." As a thank you, Quay sent Stevens a final copy. Quay died shortly after, when a car hit him as he was riding his bicycle.

Stevens has held onto his copy of the yellow-paper-bound thesis ever since, and when it comes to thinking about representing the Mohawk Trail's indigenous people, Stevens points to Quay's words, particularly the descriptions of the Native-tourism-promoting "Pageant of the Mohawk Trail" from 1914. From white people playing the Native roles to the pageant completely avoiding depictions of European colonizers displacing indigenous people, Stevens called it "a wonderful example of doing it wrong."

"Calling the automobile road the Mohawk Trail is a little bit of an injustice," he added. "This was [Mohican] territory."

So when Stevens worked with a group of Williams College winter study students in 1992 to research and map the original indigenous footpath in the Mohawk Trail area, he tried to improve on the past. He named the 100-mile route the Mahican-Mohawk Trail.

(He chose the alternative spelling of Mohican, he said, to avoid confusion with the Mohegans, a Native tribe in southeastern Connecticut).

In 1996, National Scenic Byways funding from the Federal Highway Administration allowed Stevens and other local stakeholders to form the Mahican-Mohawk Trail Partnership. The group has continued meeting over the years to improve the trail, and in 2018, it produced the first-ever Mahican-Mohawk Trail map.

The map, however, has one major problem: It says nothing about Mohicans and their homelands.

"I'm in part responsible for any mistakes," Stevens said.

He added that he hadn't fully realized there was still a group of Mohicans living today.

"I keep learning more," he said. He recently brought the idea of making educational trail signs about Native people to the Mahican-Mohawk Trail Partnership.

Christine DeLucia, who specializes in Northeast indigenous studies and who will teach at Williams starting in the 2019-2020 school year, said she started pursuing her area of study after undergoing her own learning process about Native people.

DeLucia grew up along the Merrimack River in Manchester, N.H., and attended a high school with an American Indian mascot. She said she never knew about the people indigenous to her home city until she took a course at Harvard with Native scholar Lisa Brooks.

"A lot of things that surround us in the landscape try to locate indigenous people in the deep past," DeLucia said. "In New England, there are still so many folks who are shocked to know there are enduring tribes."

She added that current residents may resist becoming more inclusive of New England's still-living tribes — by fighting to keep American Indian mascots, for instance — because that requires facing the uneasy truth of this region's colonial legacy.

"That can seem to strike really deeply at folks' sense of self," DeLucia said.

As for what to do about all of this, DeLucia suggested there wasn't a one-size-fits-all solution.

"Those are issues that communities, governments, educators need to grapple with on a community-specific level," she said.

After $4.5 million worth of renovations, The Log in Williamstown reopened in 2015 as a social space, bar and restaurant. When students, faculty and staff entered the renewed space, they set eyes on a 1942 mural by Stanley Rowland, which depicted both Colonel Ephraim Williams, the college's benefactor, and "King Hendrik" Theyanoguin, a Mohawk leader, before the pair died in the Battle of Lake George in 1755.

"[It] had been cleaned, it had been re-lit, suddenly the mural was front and center of the Black Room," Karen Merrill, Frederick Rudolph Professor of American Culture at the college, said. "The question was, 'What is this?' Everything felt sort of out of context."

In response to an initial, negative reaction, Williams president Adam Falk covered the mural with plywood. The college then formed the Committee on Campus Space and Institution History, a group of students, faculty, staff and alumni that investigated the mural in the spring of 2016. Merrill chaired the committee.

"The central problem that we dealt with at the time was the presence of that mural in a space in Williamstown and on the Mohawk Trail, where there was such a relative absence of Native peoples, whose land this was, and of any historical reckoning with their presence," she said.

The committee recommended keeping the mural up on the wall, uncovered, in order to promote reckoning and conversations about Williams' institutional histories. These histories include the college being established in 1793 with funds left by Ephraim Williams, who took ownership of what were Mohican lands and who tried to Christianize the tribe members living in Stockbridge.

"We decided on ... the pairing of some kind of small amount of text in the room combined with a fairly robust website with lots more information," Merrill said. "We are now — a subset of us from that original committee — working through that."

Merrill characterized this process as "challenging," and as something that has forced her to reexamine the way she practices and teaches American history.

"I have to start earlier, chronologically, and try to ground students in indigenous histories," she said.

Merrill is enthusiastic, however, about the increasing emphasis on indigenous studies and presence of Native scholars, both at Williams and in the field of historical scholarship at large.

"In the last 10 years, there's just been a tremendous sense of this momentum," she said. "There's an incredible interest and desire to learn more."

Eli Nelson started as an assistant professor in American Studies this past school year. He is currently the only indigenous scholar at Williams — he's Mohawk — and, somewhat predictably, he gets asked a lot about the Mohawk Trail.

Nelson will point out that the Mohawk Trail is not Mohawk territory (though some members of his tribe do claim it as such). But beyond that, he admits: "This is really not my history research wheelhouse."

Normally, Nelson's area of scholarship is the history of Native science and critical indigenous theory. But he has changed his research agendas — he has looked into Ephraim Williams, for instance, and his relationships to Native people — to answer people's questions.

"I think it's something people are interested in, but don't really have any access to," Nelson said.

While indigenous communities and Native studies programs are more established in Midwest and Canadian schools, he acts as the one representative at Williams to work with Native students to develop a Native studies curriculum vision, and to give input on discussions like The Log mural.

"It definitely is a lot of responsibility, but it is something I welcome," Nelson said.

As for people who want to know more about the Mohawk Trail and this specific region's relationship with Native people, Nelson encourages them to engage with the tribes directly.

"One of the important things with representation is to step back from representation and actually think about relationships and to remember that people still exist," Nelson said.

"We would like to have a stronger presence there," Bonaparte said. "We have numerous artists and travel troupes that would make it a regular stop if they were invited by a local [museum], university, or historical society."

Bonaparte's counterpart for the Mohican Nation Stockbridge-Munsee Band, Bonney Hartley, has already been in contact with Williams' Head of Special Collections, Lisa Conathan.

The two women communicated when Conathan put together a 2017 exhibition titled: "Take due notice of us for the future: Native Americans and Williams College." Curated in response to The Log mural discussions, Conathan gathered letters, deeds, books and photographs representing interactions between Native people and the institution. She also wrote a summary of who the Mohican tribe is today and referred people to their website.

"There's a phrase `nothing about us without us,' which reflects a professional ethic of including people about whom you're doing research and that conversation," Conathan said.

While her contact with Hartley has mostly been limited to resource referrals, Conathan envisions a future in which Williams College brings the Stockbridge-Munsee Band in as a regular stakeholder.

"I would love to see some kind of peer-to-peer memorandum of understanding between the college and the tribe," she said.

Coming next week: Examples of good peer-to-peer collaborations between Berkshire County and the Mohican tribe, particularly in Stockbridge.