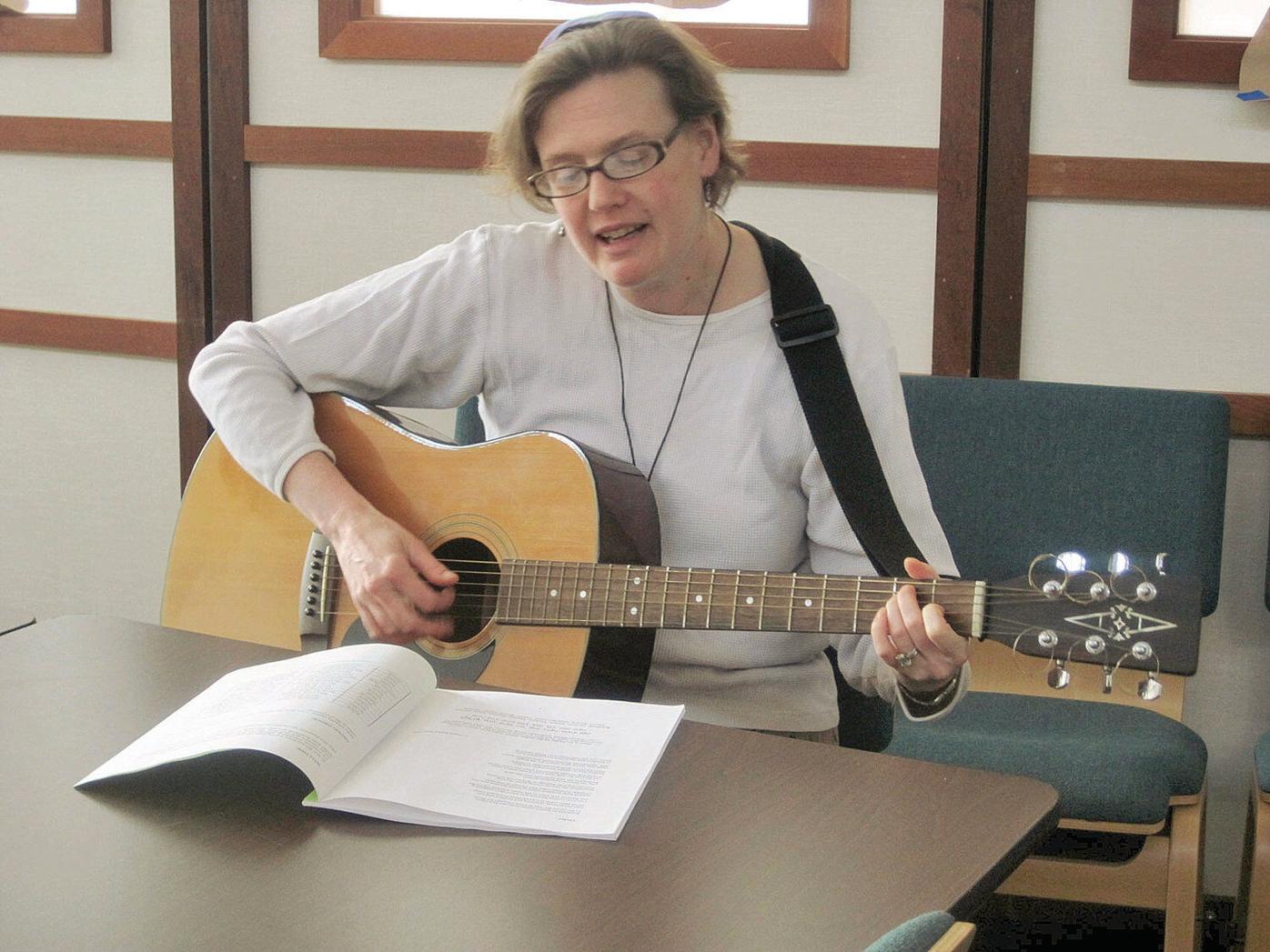 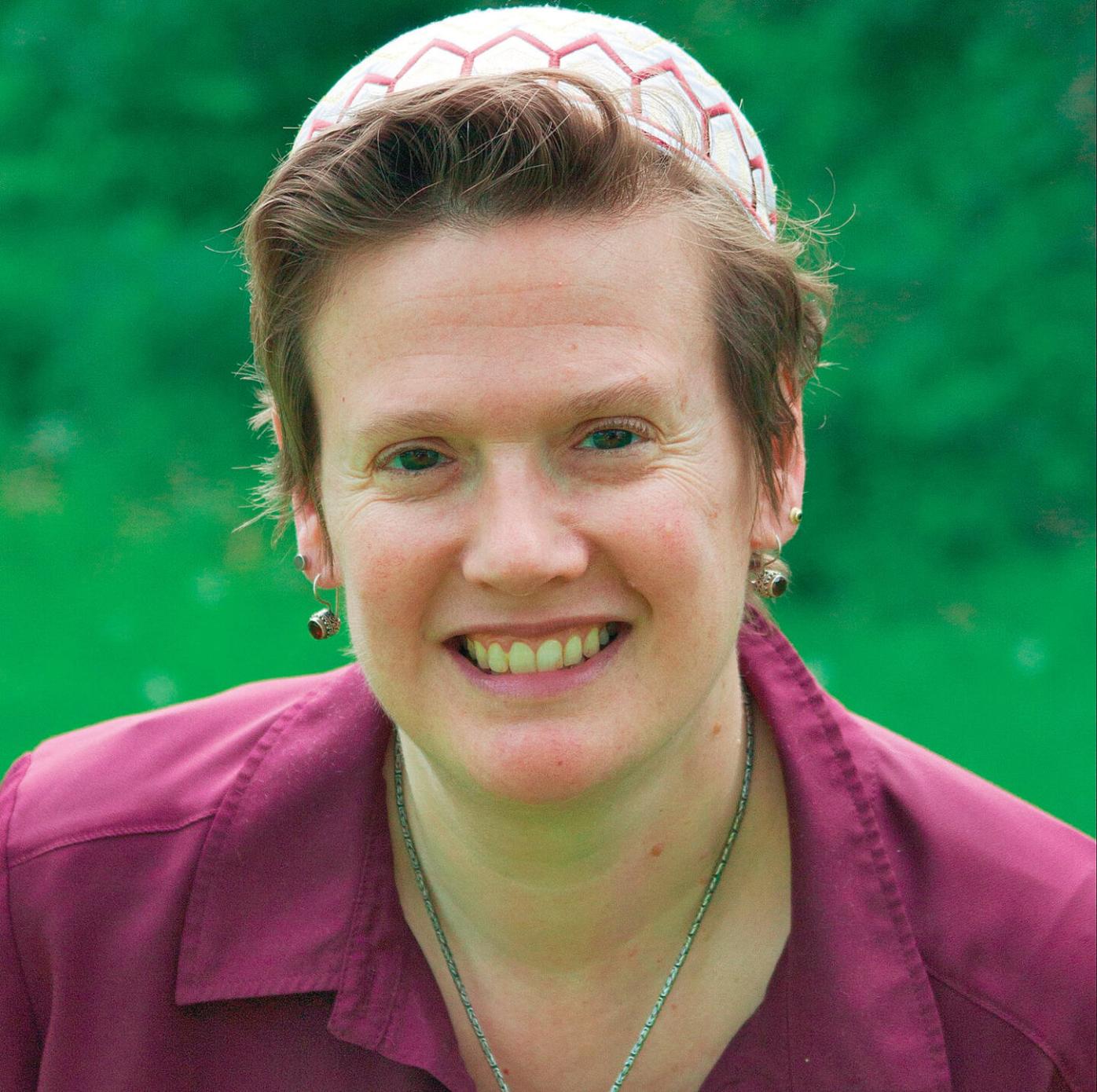 At the foot of Mount Greylock, a round building with a wall of windows looks out at the the stone path of a labyrinth in the grass. The center of the room is a sanctuary, and a woman stands taking in the light.

She moves with poised self-command and an undercurrent of laughter. Walking in, a neighbor might hear her singing a prayer to a folk melody on her guitar, or sharing and reflecting a friend's quiet triumph, or talking frankly about navigating a time of pain.

On a Saturday morning, she will welcome in the community, wearing a rainbow tallit, a prayer shawl. Rachel Barenblat is the rabbi and spiritual leader of Congregation Beth Israel, the only synagogue in Northern Berkshire.

Around the walls hang messages of support written on paper in colored marker. Last fall, in the wake of the violence at the Tree of Life synagogue in Pittsburgh, people in North Adams reached out to CBI; the congregation coming to Shabbat prayer found loving graffiti — Your community stands with you. Sending you peace. We've got your back.

For Barenblat, being a rabbi means leading a community within a larger world and reaching out to both. It means standing with the people she serves in high times and hard times — comforting illness, celebrating a coming of age, washing a body and preparing it gently for burial.

It means finding beauty and meaning, day to day. In a recent poem, posted on her blog, she listens to her son singing as she bakes challah for her mother on the last Sabbath they will ever welcome in together. And, as it did then, her work means weaving tradition and contemporary life and keeping them in relationship, direct and real.

"It's one of my moments of greatest joy," she said at Tunnel City on the first day of spring, "when someone comes up after a high holiday or a b'nai or bat mitzvah and said, `I didn't know Judaism could be like that — I didn't know I could feel it like that.' Those are the days I know I'm really doing my job."

She has served here as rabbi for eight years, and as a rabbinical student for five years before that. And in that time her influence has grown across the country and beyond.

Born in San Antonio, Texas, Barenblat has lived in the Berkshires for more than 20 years, since her days as a undergraduate at Williams College. She has since earned her MFA from Bennington College, and as a writer she has published five books of poetry.

She has also earned an international readership for her blog as the Velveteen Rabbi, which she began writing in 2003. In April 2008, Time Magazine named hers as one of their top 25 blogs, and in 2016 the Forward named her as one of America's Most Inspiring Rabbis.

And in 2018, she took the lead in an adventure with a group of rabbis, scholars and writers from coast to coast.

With her fellow rabbi and Williams alum David Markus, she has created Bayit: Your Jewish Home (yourbayit.org) — an online community that provides "tools" to build a contemporary Jewish life.

In the last year, Barenblat has been writing and editing the recently released book, "Beside Still Waters: A Journey of Comfort and Renewal," a companion for mourners. As a freelancer for more than 20 years, she brought together some 40 writers for the book, published in March by Bayit through a partnership with Ben Yehuda Press.

This book, she said, wanted to exist for 14 years and readers have welcomed it eagerly — as of the first week of spring it is the No. 1 new release in Jewish life on Amazon.

And, she said, it was released just as she came to need it. She lost her mother a month ago.

"In my own days of mourning," she said, "I was amazed at how resonant it was and how new it felt for me. Encountering it in my own time was entirely different."

In that time, she listened to a friend reading aloud her own poem, an evening prayer for the first days after a deep loss — soothe my fear of life without enough light — surrounded by the voices in her new work, and candle flame, and her own windows looking toward the hills at dawn.

— Katherine Abbott, Eagle Correspondent. Note:Rachel Barenblat has been this writer's editor and teacher and friend for almost 20 years.