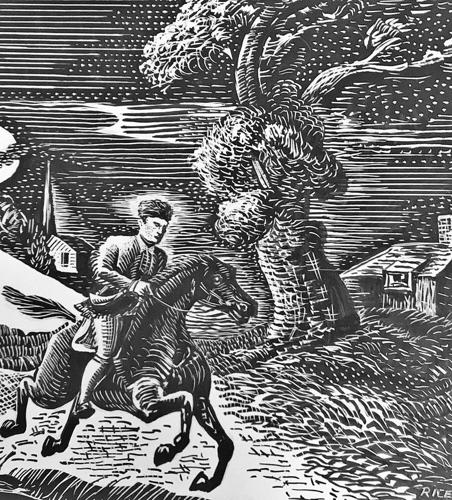 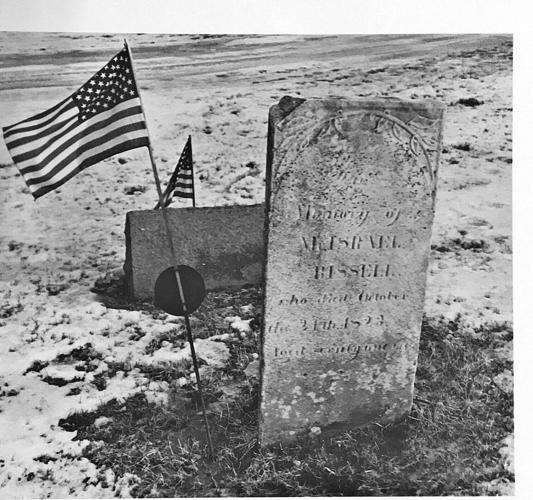 A graveside marker, placed by the Daughters of the American Revolution, tells the tale of Israel Bissell at his grave site in Hinsdale.

On April 19, 1775, near 10 a.m., Joseph Palmer, a member of the Massachusetts Committee of Safety, wrote a short letter detailing the arrival of British troops in Cambridge and the ensuing battle that happened at Lexington.

Palmer, then stationed at Watertown, sent the express rider (named Israel Bissell in numerous copies of the letter) to "alarm the country quite to Connecticut." The letter, now known as the Lexington Alarm, first traveled to Worcester, where, under the order of the city's Committee of Correspondence, it was copied, attested to by Col. Foster, a delegate and Town Clerk Nathaniel Balding, and dispatched with express riders. News of the battle at Lexington spread as the letter made its way through Connecticut and into Rhode Island. Five days later, the letter had made its way to New York City, some 345 miles away. It continued from there to New Jersey and to Philadelphia, arriving on April 26, as members of the Second Continental Congress had just started to arrive.

That letter, and the name of the express rider who carried it, should have faded into history and most likely would have, had Henry Wadsworth Longfellow not penned a poem about Paul Revere and his famous midnight ride. Not wanting to let Boston get all the credit for rousing the country to its feet, a rider who appeared to travel farther than Revere was stirred up nearly 141 years later, when the tale of Connecticut-born Israel Bissell was told. In this heroic tale, Bissell, later a resident of both Middlefield and Hinsdale, gallops from Massachusetts to New York City in less than a week, warning all he passes that the British have arrived and attacked Lexington.

But was this rider Israel Bissell the same one who lived out his days in Hinsdale? This has been a subject of debate for some time, with credit now, erroneously, being given to another rider, Isaac Bissell of Suffield, Conn., despite evidence favoring Israel Bissell. (It should be noted the name Isaac Bissell appears in some later transcriptions of the Lexington Alarm, as does the name Tryal Russell.)

The earliest documentation of Israel Bissell's ride found by this reporter appear in the Hartford Courant on July 23, 1916, in a column, "Famous Ride of Israel Bissell: How the East Windsor man carried the news of the Battle of Lexington and Concord from Watertown, Mass. to Philadelphia." In it, the author recounts the tale of how the Continental Post Riders were established in March 1774 by the patriot printer William Goddard (misspelled Coddard in the column), of which (the author claims) the most trusted riders were "Israel Bissell of Connecticut, Cornelius Bradford of New York and Paul Revere of Massachusetts." It may be this column that sparked the legend of Bissell's five-day, 345-mile trip and spurred numerous individuals to celebrate him, not Revere, as the true champion of the spreading the alarm.

By 1929, an article in "The Minute Man" credited the ride to an Israel Bissell of East Windsor, Conn., who years after the war, moved first to Middlefield and later to Hinsdale, where he is buried. That fact, repeated in a May 1932 Berkshire Eagle article, drew the attention of Phillip Mack Smith. In a letter to the editor he wrote: "Upon the appearance of this article in 'The Minute Man' in April 1929, I made inquiry as to his authority of the identity in question, and he replied, citing 'The History of Middlefield, Mass.,' which was written by my brother, Edward Church Smith and myself. In justice to us, may I say, wherever the long distance ride is mentioned in that volume it is stated that Israel Bissell of Middlefield and Hinsdale was 'probably' the man who made the ride."

Smith continued on in the letter that the brothers were uncertain as to which Israel Bissell made the ride. There was the Israel Bissell of Middlefield and Hinsdale, who lived in East Windsor in 1775, and his father, of the same name. Both Bissells served during the Revolutionary War. The younger, noted as Israel Bissell Jr. in some records, but not all, served in Capt. Stoughton's muster in June 1775 and in Capt. Wolcott's muster in 1776. "The question, therefore, is, did Israel Sr., aged 55, or his son, Israel, aged 23, make the remarkable ride?" Smith wrote.

Nevertheless, East Windsor and Hinsdale were happy to celebrate their patriotic son, who received numerous accolades over the ensuing decades, including a graveside marker, placed by the Daughters of the American Revolution, detailing his feat. Hinsdale named a park in his honor and hosted an annual 5K race bearing his name. There was even a postage stamp and cancellation stamp issued by the U.S. Post Office.

The unsung hero, as many articles called him, became a favorite story for the press to recycle around Patriots' Day for the next 80 years or so. That was until 2007, when Stockbridge historian Lion Miles made a case against Israel Bissell. (He had done so many times in previous years, but the 2007 letter to the editor in the March 26, 2007, issue of The Berkshire Eagle is of significance. That letter, along with a 2004 iBerkshires.com column by Miles are cited most often by historians crediting Isaac Bissell with the ride.)

In the 2007 letter, Miles wrote: "There are absolutely no 'authenticated records' that a man named Israel Bissell did anything at all during the American Revolution and there is no documentary proof that he even was a post rider. The entire ridiculous story is based on the misspelling of the actual rider's name in a newspaper account that was carried throughout the colonies by a series of established express riders, all the way to South Carolina." He also chided anyone for believing a lone rider could travel from Waterford to Philadelphia in six days.

He further contends in the letter that the rider's real name was Isaac Bissell, based on documents held by the William L. Clements Library at the University of Maryland and in the Massachusetts Archives at Columbia Point. "He rode only as far as Hartford, as the original order reads ... He signed the documents clearly as Isaac Bissell." (This letter may be one sent by the Committee of Safety on April 20, 1775.)

Earlier, in 2004, Miles claimed the post rider was Isaac Bissell based on a letter from the rider to Palmer, requesting payment for a post delivery in April 1775. Miles wrote: "In March 1776, he petitioned Col. Palmer for help and wrote [sic], 'Sir you may Remember when Lexinton Fite was you gave me an Express to Cary to Hartford in Connecticut which I did,' adding, "I think I Earn my money.' He signed with the clear signature, "Isaac Bissell of Suffield." (Massachusetts Archives, vol 303, p. 162.)"

In the past dozen years since Miles wrote his letter, institutions across the country have brought their historical collections online, providing researchers from afar the ability to view original source documents. And thus, given this reporter the ability to make a case for Israel Bissell.

As to Mr. Miles' claim that there are "no 'authenticated records' that a man named Israel Bissell did anything at all during the American Revolution," we point out there are several Revolutionary War documents that can be viewed on FamilySearch.org, Ancestry.com and Fold3.com that prove otherwise. There are several muster rolls showing both Israel Sr. and Israel Jr. among the ranks of Connecticut musters in 1775 and 1776. And on Fold3, a document from Capt. Wolcott's muster shows payment of 30 shillings to Israel Bissell for his service in 1776.

As to his claim that Israel Bissell's name does not appear on the actual Lexington Alarm, but was a misspelling repeated in a newspaper article, there is proof that Bissell's name does appear on numerous hand written copies of the document. There are several copies of the Lexington Alarm that can be viewed online. One held by the Scottish Rite Masonic Museum and Library in Lexington, clearly states the bearer of the letter as Israel Bissell. It's a copy-of-a-copy, written by Daniel Tyer Jr. Tyer made the copy when it arrived in Brookline, Mass., on April 19, 1775, from a copy received by express and penned by Balding in Worcester. (Thus, if the rider's name was incorrectly transcribed, it would have happened in either Worcester or Brookline.)

A copy of the alarm, held in the digital archive of the New York Public Library, transcribed from numerous copies prior being transcribed by the chairman of the committee of safety in Elizabethtown, N.J., still bears the name Israel Bissell, as does a broadside held by the Library of Congress, printed on April 23, 1775, in New York City. The broadside speaks of the news of the battle arriving by two vessels from Newport, R.I., and by an express by land. The Lexington Alarm, passed on from Providence, R.I., and copied numerous times over, also bears the name of Israel Bissell.

As for the matter of Isaac Bissell being paid for his ride, which is held high as the proof that he was the Lexington Alarm rider, it's much more likely he received his payment of two shillings for delivery of another letter sent by the Committee of Safety on April 20.

One can view the April 26, 1776 resolve to pay Isaac Bissell's payment "for his riding express to Hartford, Conn. in April 'last past'" on FamilySearch.org. "The journals of each Provincial congress of Massachusetts in 1774 and 1775, and of the Committee of safety" on archive.org, contains the acts ordering his request be considered and the transcription of a letter (on page 518) dispatched by the Committee of Safety on April 20, 1775, to the governments of the colonies of Connecticut and New Hampshire. This is the letter Isaac Bissell most likely delivered and requested two shillings payment for.

As Miles points out, Isaac Bissell only went to Hartford as his letter instructed, something that wasn't part of the Lexington Alarm letter. As the surviving copies of the Lexington Alarm fail to give the direction to bring the note to Hartford, it is safe to surmise Isaac Bissell was not charged with carrying the letter dispatched from Watertown on April 19. Making it more likely than not that Israel Bissell delivered the letter from Watertown to Worcester.

But what of the claim that Israel Bissell traveled further and faster than Revere?

An amazing story, if it was possible to travel 70 miles a day without resting. If possible, Bissell would have needed to ride at least one Narraganset, a now extinct breed of race horse that could travel a mile in 2 minutes time and could, according to accounts, travel 100 miles in a day. But, as the alarm letters show, the word was spread far and wide by a system of express carriers carrying copies. Most likely Bissell rode from Watertown to Worcester, where Col. Foster, a delegate of the state's Second Provincial Congress was stationed, as well as two notable members of the Constitutional Convention, John Adams and John Hancock (who, having been spirited away from Concord ahead of the British arrival, thanks to a famous alarm, were headed to Philadelphia.)

But at the end of the day, does it really matter if the tale of Israel Bissell, of Middlefield and Hinsdale, is 100 percent true if it excites enough people to celebrate the founding of our country and the patriots who risked life and limb for it? Why not let Israel Bissell be the folk hero we need?