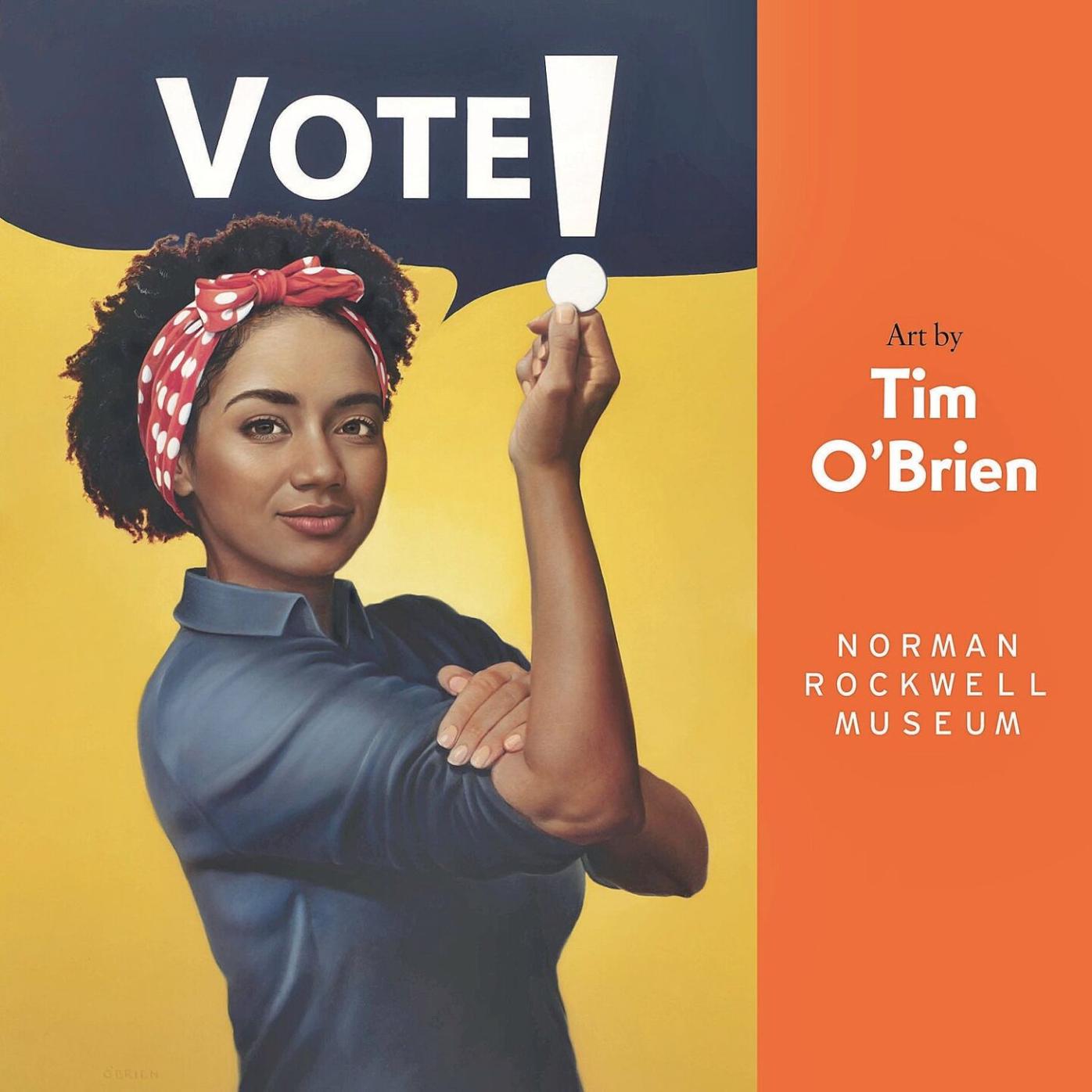 In a take on J. Howard Miller's famous World War II poster, a woman flexes her bicep while holding an exclamation point for emphasis. 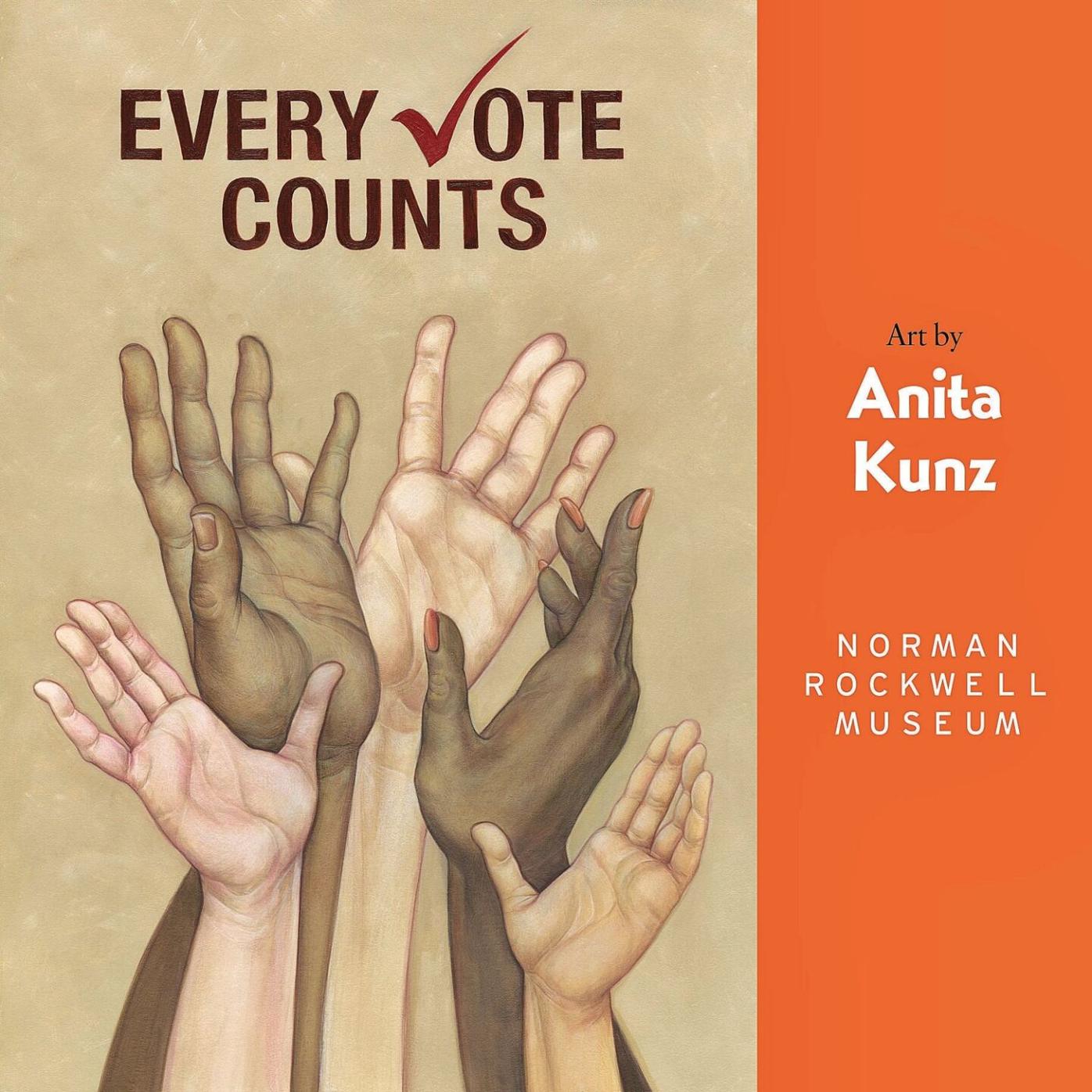 An illustration by Anita Kunz depicts a diverse set of hands, raised and reaching. It is one of six works commissioned by the Norman Rockwell Museum in Stockbridge, as part of The Unity Project. 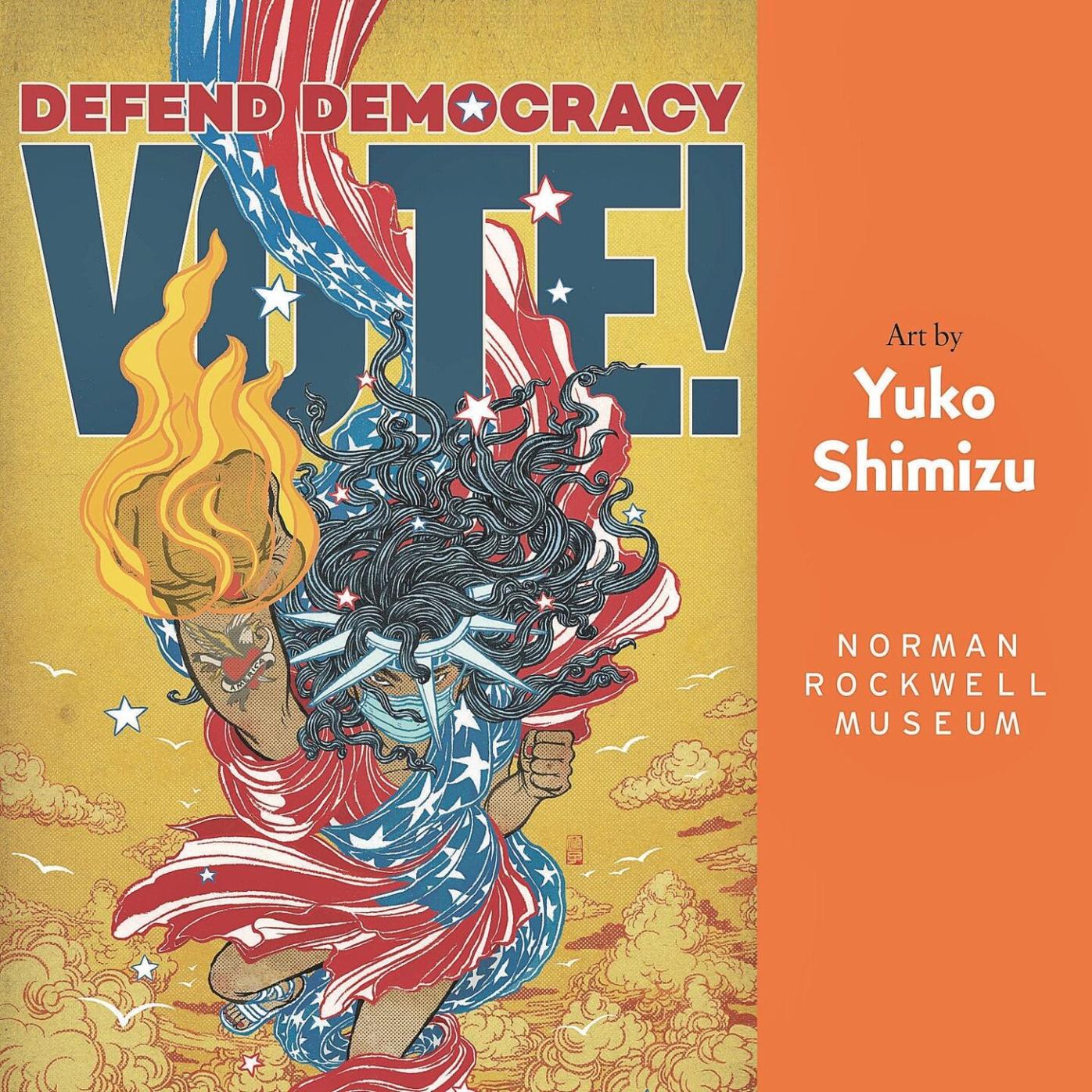 Lady Liberty stares up defiantly through a crown's silver spikes in Yuko Shimizu's illustration. "I wanted it to be very accessible," she said. "It's for everyone to see and get excited about voting." 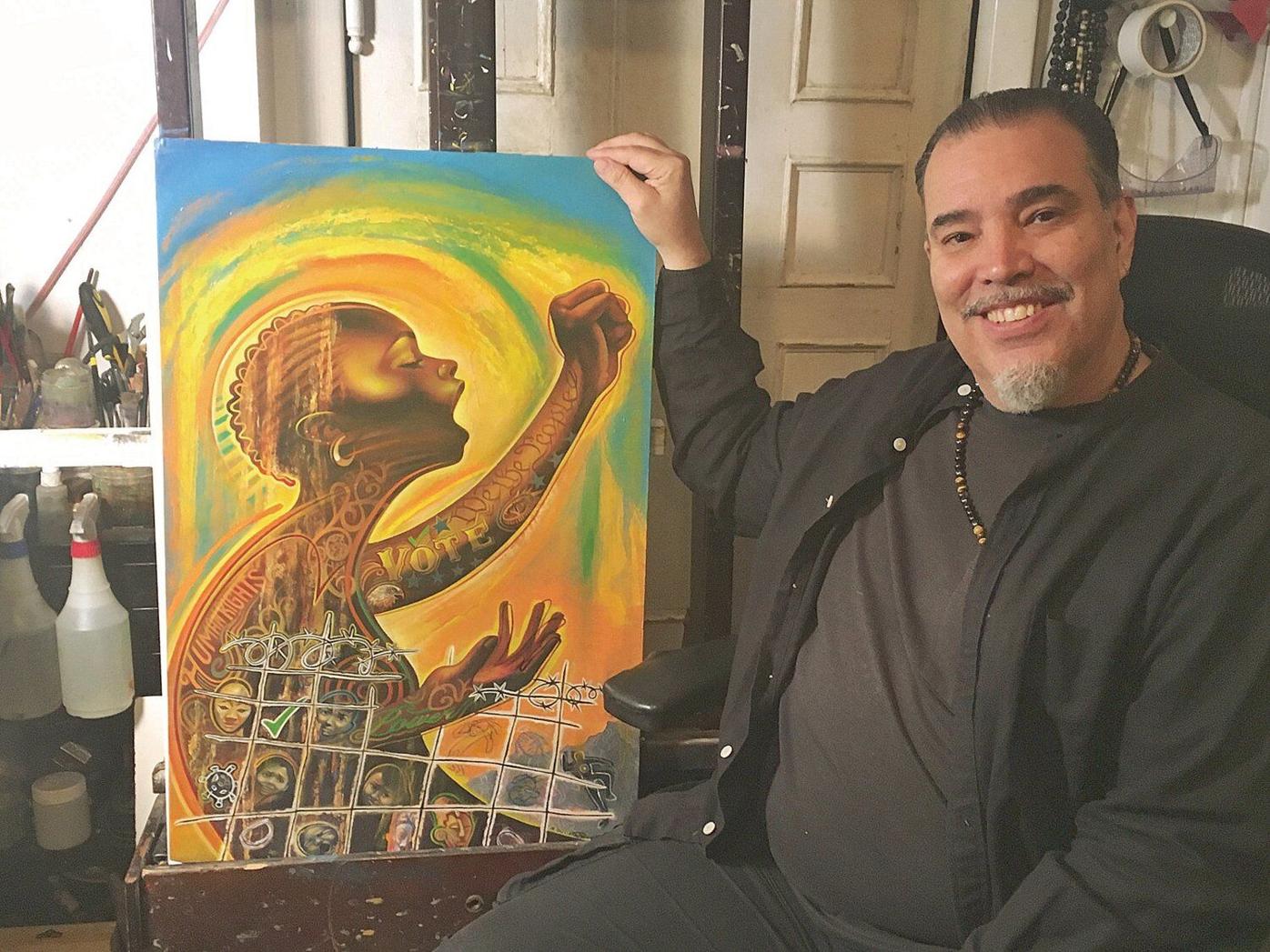 Artist Rudy Gutierrez displays the illustration he calls "Humanity, Not Politics," one of six commissioned by the Norman Rockwell Museum in Stockbridge. "For me, it's about humanity and the sacred scream we all have," Gutierrez said.

In a take on J. Howard Miller's famous World War II poster, a woman flexes her bicep while holding an exclamation point for emphasis.

An illustration by Anita Kunz depicts a diverse set of hands, raised and reaching. It is one of six works commissioned by the Norman Rockwell Museum in Stockbridge, as part of The Unity Project.

Lady Liberty stares up defiantly through a crown's silver spikes in Yuko Shimizu's illustration. "I wanted it to be very accessible," she said. "It's for everyone to see and get excited about voting."

Artist Rudy Gutierrez displays the illustration he calls "Humanity, Not Politics," one of six commissioned by the Norman Rockwell Museum in Stockbridge. "For me, it's about humanity and the sacred scream we all have," Gutierrez said.

STOCKBRIDGE — Lady Liberty isn’t holding a mere torch to light the way. In a new illustration inspired by the iconic statue, her raised, clenched fist is actually aflame.

And instead of a serene, 1,000-yard stare, artist Yuko Shimizu’s Lady Liberty stares up defiantly, through a crown’s silver spikes and Medusa-like shock of hair.

Shimizu’s work soon will join the permanent collection of the Norman Rockwell Museum. But, right now, in a first for the Stockbridge center, her illustration, and five others also commissioned by the museum, will be offered as free downloads to be shared on social media as part of a voter-registration campaign.

The drive, called The Unity Project, launched Tuesday on National Voter Registration Day. With help from donors Jack and Susie Wadsworth, the museum is investing about $150,000 in the project. It represents a major investment for the museum and is the first time it has commissioned work to be published, said Laurie Norton Moffatt, director and CEO.

The campaign picks up on themes long depicted in work by its namesake artist. And it continues the museum’s efforts to inspire civic engagement and to celebrate democracy, Norton Moffatt said.

At the same time, The Unity Project is a leap forward into wider digital distribution, she says, at a time when the coronavirus pandemic challenges old models.

“We are using digital tools now at a moment when the physical is so constrained,” she said. “There’s a special spark around this project. We hope that we can deepen our connection and our reach. To work in a new way in the world.”

Spurred by an idea from the Wadsworths, the museum put out a call to 10 illustrators to create pieces on deadline for the project. From that common call came six diverse responses: A line of voters, masked, stands ready to drop ballots in a box. A woman flexes her bicep, as in J. Howard Miller’s famous World War II poster, to hold an exclamation point after the word “Vote.” Hands raised and reaching, under the words “every vote counts.”

Stephanie Plunkett, the museum’s chief curator, said the artists were just asked to create images that would inspire people to vote. “Illustration is an art that kind of has a job to do.”

The contributors, all considered premier illustrators, answered the call in distinct ways and styles — realistically, conceptually, expressively and through innovative graphic design. The museum made minor suggestions along the way, but Plunkett, who served as creative director, said they needed little supervision.

“You have to respect their point of view. Everybody came in with a great concept,” she said.

Gutierrez created a work he calls “Humanity, Not Politics.” It shows a young Black woman from the side as if in song, her head cupped by a swirling pastel aura. What’s playing inside her shows not only in tattoos, but in tiny scenes rendered between fence wires: a crying child, faces of border detention, chalk outlines of bodies.

Gutierrez said he was open to the invitation, but on his terms.

“Well, I thought, I’m interested if I can talk about what’s important to me right now within the framework of voting. For me, it’s about humanity and the sacred scream we all have,” he said.

His illustration does contain a tiny green check mark, there alongside scenes of pain. He said it is a symbol of having voted.

“My wife always tells me, ‘It’s doing what we can where we stand,' " he said. "For some people, that’s just voting.”

Shimizu, whose fiery Lady Liberty flies up toward the viewer, says she began the assignment wanting to connect.

“I wanted it to be very accessible," she said. "It’s for everyone to see and get excited about voting.”

As Shimizu began, she knew she wanted to feature a strong woman. That led her to fashioning a racially ambiguous superhero, inspired partly by the comics character Wonder Woman. Shimizu has done covers for comic books.

“Maybe she is a modern Statue of Liberty who is a superhero,” she said. “It kind of built to become that way.”

All the illustrations can be found, along with artist statements and biographies, on a new website, vote.nrm.org. The page also links to the Rock the Vote registration platform.

Norton Moffatt said the campaign hopes to see wide public use of the illustrations. People can download and post right to social media from the website, using slogans provided or creating their own. While those personal messages surely will contain partisan calls to action, the project itself focuses on use of the ballot.

“Each of us has the right to vote, regardless of your politics,” Norton Moffatt said. “It is one fact of citizenship that we all hold in common. We all share this one right and responsibility. I would hope people see this as an appeal to everyone — and then people can act according to their own beliefs.”

Though it takes advantage of new tech tools, The Unity Project is, in ways, a throwback to eras, including the world wars, when the government used posters to rally citizen support. While the new illustrations all are poster-shaped, 24 inches by 36 inches, they needed to be square for social media use. A designer created versions for Instagram by adding the artists' names and museum in a right-hand panel.

Starting Oct. 17, the works will be exhibited with Rockwell’s “Four Freedoms,” a set of four 1943 oil paintings inspired by remarks to Congress in 1941 by President Franklin Delano Roosevelt. The works just returned from a six-city tour across the U.S. and to France. They depict “Freedom of Speech,” “Freedom of Worship,” “Freedom from Want” and “Freedom from Fear.”

“This will be a new chapter,” Norton Moffatt said of those paintings. “Freedom still needs to be defended and acted upon in new ways.”

Norton Moffatt believes Rockwell’s appeal stems, in part, from the way his paintings and illustrations often depict people being their best selves.

“That made one feel a sense of belonging to a notion, to an ideal,” she said. "He had a unique finger on the pulse of people. He always saw the best in us.”

Shimizu, whose Lady Liberty seeks to inspire citizens to vote, said illustrations, in any era, only begin the journey.

“The rest is up to the audience. They can come up with their own stories,” she said. “And finish it for us.”

A new exhibition at the Norman Rockwell Museum, “Norman Rockwell: Imagining Freedom,” brings home the iconic “Four Freedoms" paintings, which have been on a six-city international tour since mid-2018. The exhibit is the first comprehensive look at how the paintings came to be embraced by the American public, provided aid to the war effort and helped uplift public morale.