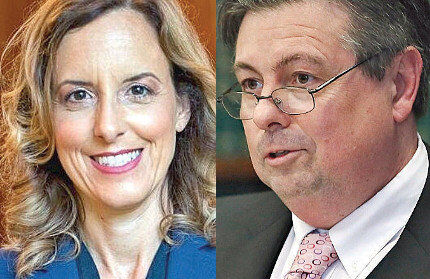 Former Berkshire District Attorney David F. Capeless has come out publicly to support his successor, Paul Caccaviello, above right, questioning the qualifications of his rival in the race, attorney Andrea Harrington, above left. 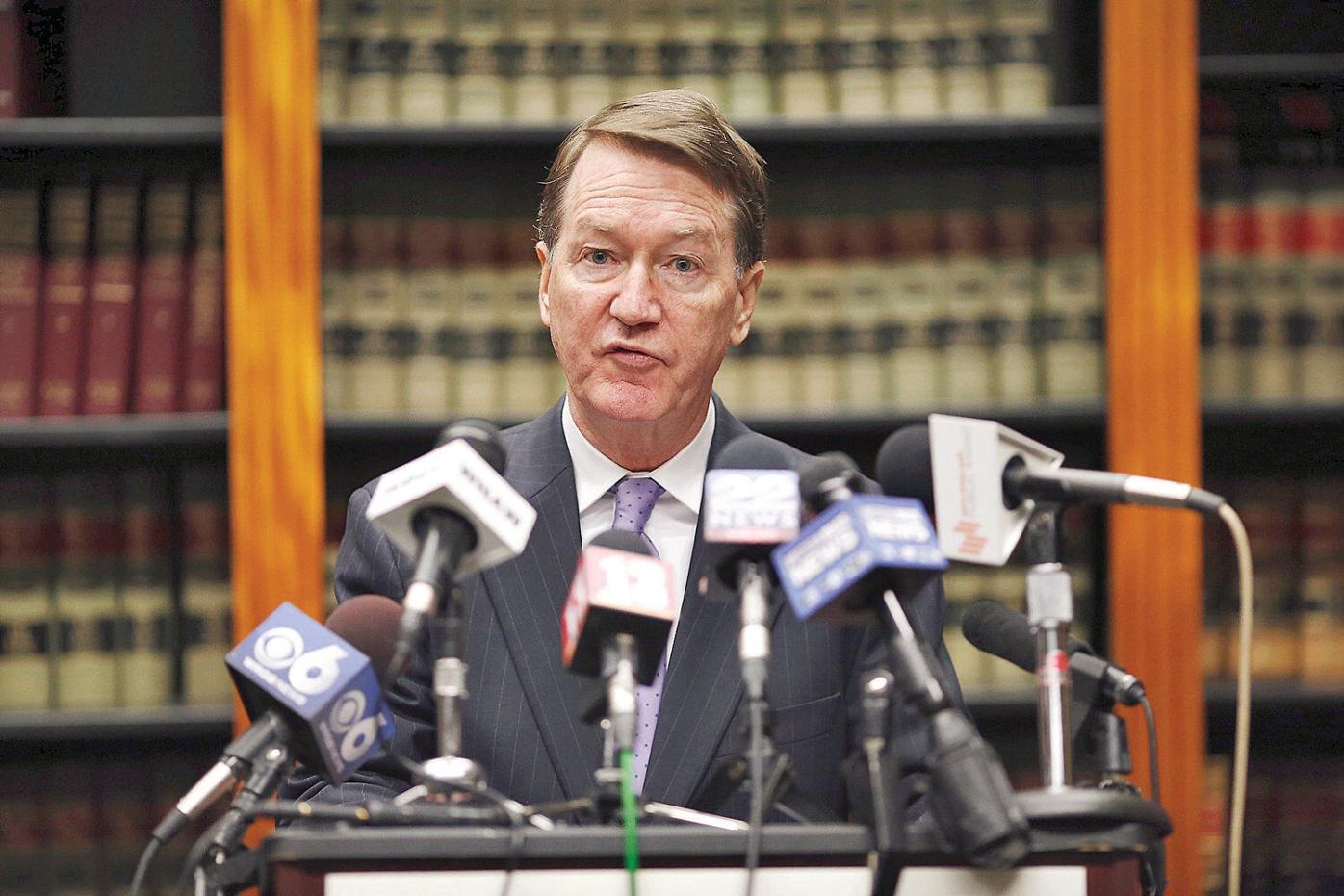 Former Berkshire District Attorney David F. Capeless, who retired in March, largely has stayed out of the public eye during the campaign to succeed him, until last week. 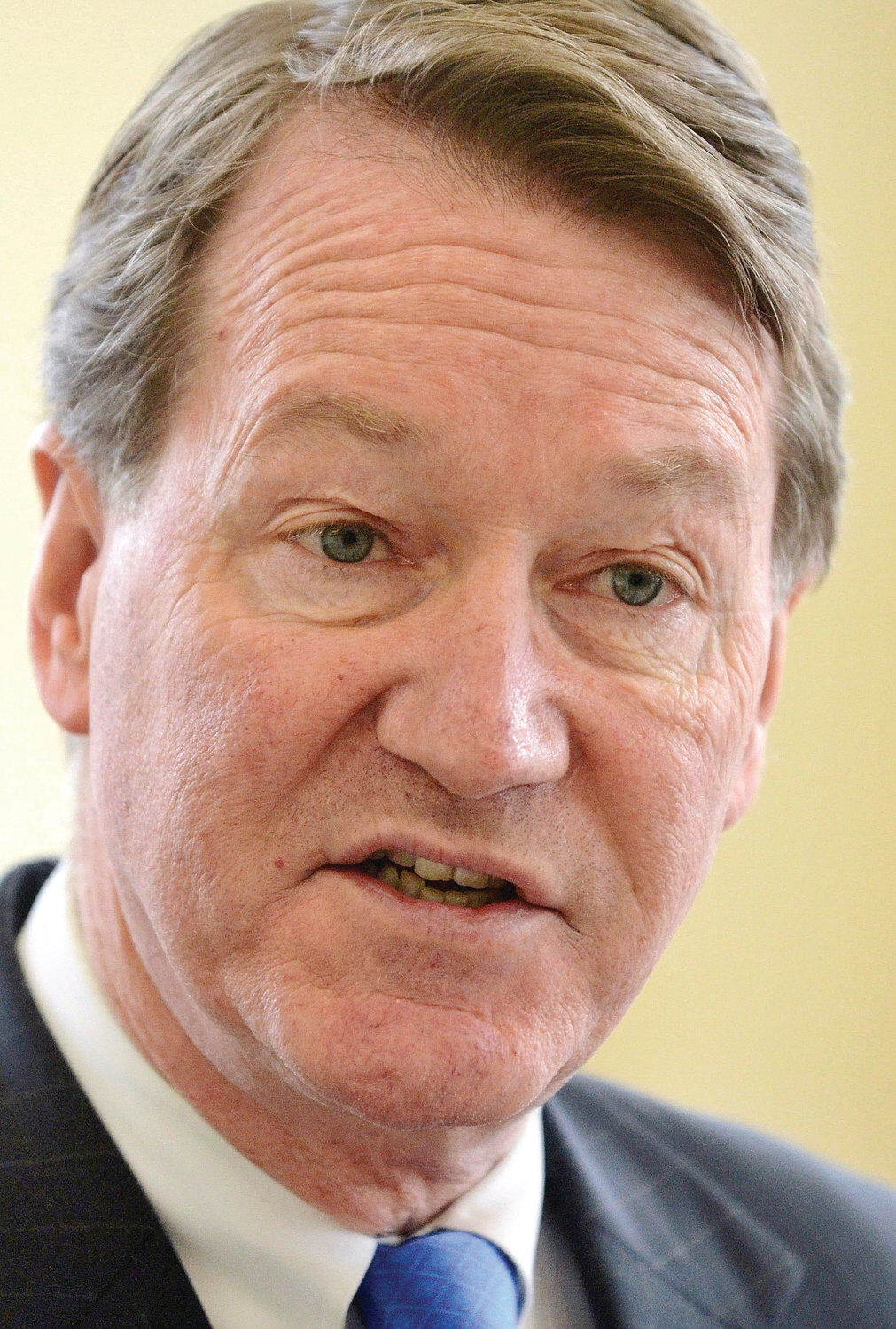 Former Berkshire District Attorney David F. Capeless has come out publicly to support his successor, Paul Caccaviello, above right, questioning the qualifications of his rival in the race, attorney Andrea Harrington, above left.

Former Berkshire District Attorney David F. Capeless, who retired in March, largely has stayed out of the public eye during the campaign to succeed him, until last week.

Candidates for Berkshire district attorney, and their supporters, have sharpened their attacks in the final days leading up to Tuesday's election.

The former district attorney has come out publicly to support his successor, Paul Caccaviello, questioning the qualifications of his rival in the race, attorney Andrea Harrington.

And social media attacks against Harrington have prompted fierce pushback from her campaign manager, who accused Caccaviello's campaign of taking "a page out of Donald Trump's playbook."

While endorsements continue to pour in for the candidates, each camp points to the other as the source of the contentious politics.

Caccaviello is running a write-in challenge to Harrington, who won a three-way primary in September for the Democratic nomination. With no Republican candidate, Harrington's is the only name to appear on the ballot in the election.

Former District Attorney David F. Capeless talked with the Eagle about his frustration with the rhetoric of the race.

"This is what has pained me; all of the work during my 14 years as DA has been horribly mischaracterized," Capeless said in a phone interview Monday. "As I've stated previously, this sort or rancor and nastiness got started with the Harrington campaign."

Capeless, who retired in March, largely has stayed out of the public eye during the campaign, until last week, when he went on the air with WAMC's Josh Landes. In the WAMC interview, Capeless responded to criticisms of his office, Harrington's law experience, and he shared his own critiques of local government.

One of the earliest attacks on Caccaviello's campaign was the process in which he was appointed to replace Capeless in March.

Capeless was criticized after Commonwealth Magazine printed email correspondence between the former district attorney and the governor's office that showed steps he took to ensure Caccaviello's appointment. The emails showed that Capeless pulled papers to run in this year's election, even though he knew he would retire in an effort to mislead local media.

In his interview with WAMC, Capeless said those emails were taken out of context, and that he "wasn't trying to hide anything; just trying to stall" the news of his retirement.

Capeless told Landes and The Eagle that he doesn't regret recommending Caccaviello to Gov. Charlie Baker, and that he did it "for the right reasons."

Retrospectively, knowing that it would give Caccaviello's "opposition something to rail against," he might have done it differently, he said. Caccaviello was the only attorney that Capeless felt was qualified to fill his shoes, Capeless said.

"I was thinking about the community, and the office," he said.

"Andrea Harrington never really practiced criminal law in Berkshire County," he said, adding that some of her support comes from people with grudges against the office.

While Capeless feels that it's likely Caccaviello will succeed, despite the difficulties of a write-in campaign, he said it would be "a disaster" if Harrington is successful.

"I realize it's already been said, but her biggest problem is going to be, what she doesn't know, she doesn't know," Capeless said. "And all this talk about she's just going to hire these great legal minds; all the best trial attorneys in Berkshire County are already working in the DA's office."

Those prosecutors are unlikely to stick around if she is elected, he said.

"I spent 35 years as a prosecutor, 14 as the first assistant, the top trial attorney doing all the biggest and toughest cases. Then, 14 years, also continuing to handle the toughest cases, and running the office," he said. "With all of that experience and the confidence, I still found the job difficult."

And Capeless contended that many of the things Harrington has pledged to do, such as vigilant prosecution of domestic violence cases, already are in place.

It's well-known that areas made up of low-income individuals who don't have access to higher education and proper health care are predisposed for crime, Capeless acknowledged.

Harrington issued a written statement in response to comments made by the former DA.

"I am proud of the positive campaign I have run based on my vision for making Berkshire County a safer and healthier place to live, work, and raise a family. My campaign is about bringing needed reforms to the Berkshire County District Attorney's Office," she said.

"My opponent's campaign has shown that they are willing to do or say anything to get him elected," Harrington said. "We will continue to take the high road. Voters in Berkshire County have made it clear that they care about tangible solutions to the opioid crisis and addressing violent crime; not finger-pointing and negative attacks."

Politics surrounding the race have been especially volatile on social media. On Facebook, Harrington has been the target of personal attacks.

One particular Caccaviello supporter has been persistent over the past few months in praising Caccaviello and disparaging Harrington, referring to her as a "crazy lady."

In one post, the man asked if Harrington and her husband "partner swap" with other men who have worked on her campaign.

Caccaviello said that the account, and the man who runs it, is in no way associated with his campaign and that he doesn't condone that kind of language.

"I know who he is. I've met him; not many times, maybe twice. Anything like that, that's not appropriate by any stretch," he said. "I don't condone anything like that; that's offensive and should not be part of any campaign."

"After our opponent was endorsed by the far-right Berkshire County Republican Association, we have seen his campaign take a page out of Donald Trump's playbook," Webster said in an email to The Eagle. "Attack, attack, attack, and don't let facts get in the way. He's brought the same sort of divisive politics we see in Washington, DC to Berkshire County, rather than offering solutions to crime, addiction treatment, and public safety."

Caccaviello bristled at the Trump reference.

"I don't think efforts to try to divide our community play well in Berkshire County," he said in a written statement.

"Here is what I have done in this campaign: I have compared my qualifications to my opponent's and tried to explain that the office of District Attorney requires substantial prosecutorial experience," he said. "This is how candidates stand for office. It's not an attack. It's a fact."

This week, Caccaviello also accused the Harrington campaign of intentionally misleading voters. He said that he learned of the alleged tactic from several residents while he was canvassing.

Geoffrey Sokolsky of Great Barrington told The Eagle that he was moved to reach out to Caccaviello about a visit he had from a canvasser last week.

"He was not immediately represented as a canvasser for Ms. Harrington. It was more a query of my intentions or not to vote," Sokolsky said. "I said, 'Yes I will vote in that election,' but I had not yet decided for whom I would vote. The gentleman's response was, `You don't have anyone else to vote for; she's the only one on the ballot.' "

Sokolsky, who had volunteered as a canvasser years ago, said he "pushed back a little" and mentioned that Caccaviello appears to be running an organized write-in campaign, but the man disputed that.

"No, he was defeated in the primary," Sokolsky said, quoting the canvasser. "Andrea Harrington is the only one on the ballot, and she's the only one you can vote for."

Sokolsky said he is not sure if the man was just an uninformed, rogue volunteer or if there was any intended malice, but he was concerned that it was irresponsible and "undermined the democratic process."

"You're not really in any way obligated to tell the whole truth, but you are expected to not tell a nontruth," he said. "It left me with a bad taste in my mouth."

Still, Sokolsky, who is unenrolled, said he is unsure who he'll vote for in the general election.

"I did it not so much to help with the Caccaviello campaign," he said, "but just to make a comment on the process."

In a written statement, Caccaviello said his volunteers have reported similar incidents from residents of Pittsfield and Great Barrington.

"The false information about the Write-In process being spread by the Harrington Committee is not only misleading but unfair to voters. I am publicly asking Andrea Harrington and her campaign to stop misleading voters. The Write-In Campaign that I have launched is part of the democratic process, and we should be doing what we can to truthfully educate voters about their options on election day."

Webster, Harrington's spokesman, issued a statement on behalf of the campaign.

"We are proud of our large, grassroots network of volunteers," he said. "When they are out knocking on doors and talking to neighbors, they are talking about Andrea's campaign, her vision, and her tangible solutions for making Berkshire County a safer and healthier place. We're not interested in engaging in the divisive attack politics that our opponent has embraced."

In the final weeks leading up to the general election, public figures and organizations continue to throw their support behind their favored candidates.

On Oct. 23, the Berkshire Law Enforcement Council, an organization of local police chiefs, voted unanimously to endorse Caccaviello in his write-in campaign.

District attorneys Michael O'Keefe of the Cape and Islands, Jon Blodgett of Essex County and Anthony Gullini of the Hampden District also provided a joint statement in support of Caccaviello.

In a letter to Caccaviello, the Massachusetts Coalition for Police, a state organization, said Caccaviello's "commitment to public safety for citizens of our commonwealth" is important for the county.

"We endorse Paul Caccaviello for District Attorney because we believe that the prosecutor's office is unlike a legislative position, it is an executive position requiring specific expertise in the criminal law and the prosecution of crime," a letter from the district attorneys said. "Paul has the expertise to keep professional leadership at work in the District Attorney's Office, and we encourage the public to elect an experienced professional prosecutor."

Berkshire County Sheriff Thomas Bowler has endorsed Caccaviello in radio ads throughout his campaign, but he also recently submitted a formal endorsement in writing, touting the prosecutor's experience handling "5,300 cases."

"Andrea Harrington is committed to building a safe community, protecting the vulnerable, and combating the opioid epidemic," Neal said in a written statement. "Democrats will win in November by making this election about standing up for our values and I'm proud to support Andrea Harrington for Berkshire County District Attorney on November 6th."