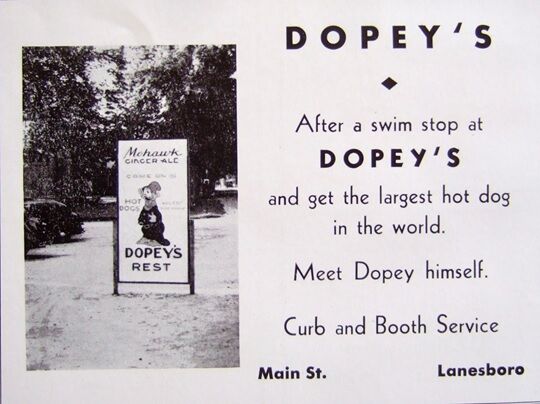 Dopey’s Rest was opened in 1938 by Enar Fundell, who operated the eatery for over 30 years. This ad pictures the restaurant’s sign with namesake character and a plug for its hot dogs — originally footlongs. 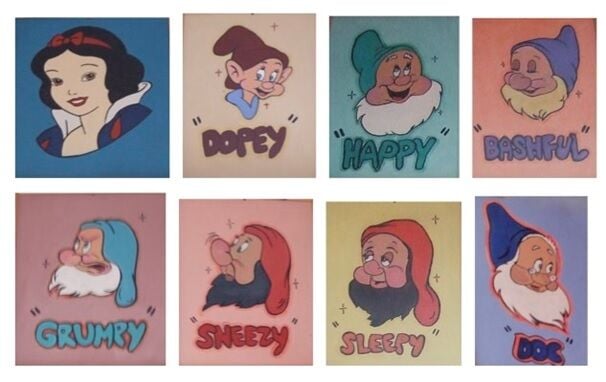 A local artist painted replicas of the Disney drawings of Snow White and the seven dwarfs to display on the wall of Dopey's Rest in Lanesborough. These paintings are still on the wall in what is now Bob’s Country Kitchen. 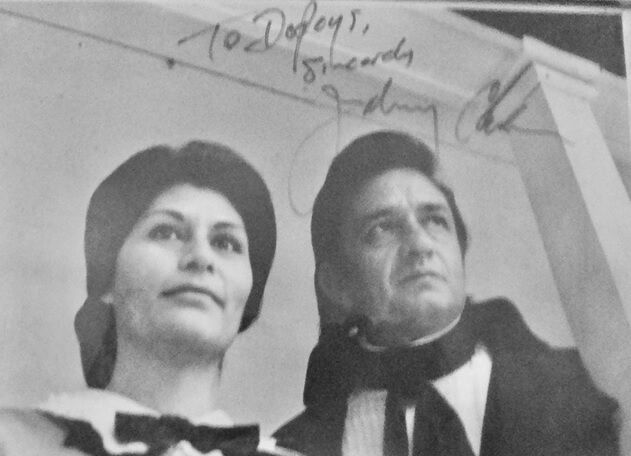 In 1969 and 1970, musician Johnny Cash was in his first movie,”Trail of Tears,” with scenes filmed at Brodie Mountain Ski Area in Lanesborough. He became a regular customer at Dopey’s Rest, and signed this photo with his film’s co-star, Paulette Smart.

Where could you get a delicious footlong hot dog in the 1960s? Few baby boomers would fail to answer this one. Of course, it was Dopey’s Rest (or Restaurant) in Lanesborough.

For my sisters and me, the eatery was a special treat after a family day at Pontoosuc Lake. As a teen, it was a must on a date before a double feature at the Sunset Auto Theater or a snack after a hike on Mount Greylock.

Dopey’s was originally opened and named by Swedish immigrant Enar Fundell. In 1938 Enar had moved from New Jersey to Lanesborough, to lease a gas station and eatery at 42 South Main St.

At the time, the Disney movie “Snow White and the Seven Dwarfs” had recently opened up in theaters across the country. Capitalizing on the movie and the cute character of the youngest dwarf, Fundell called his new restaurant Dopey’s. He may have also been inspired as well by the 1938 Pittsfield High School senior class members’ selection of Dopey as their favorite actor.

The origin of the movie was interesting. It took 300 Disney artists four years to produce 2 million drawings to make what was the first full-length, hand-drawn color movie. Disney did not see the movie as a cartoon, but as a work of art. He once said, “it is no more a cartoon than a painting by Whistler.”

Disney made very few changes in the original story written by the Grimm Brothers. The artists had a challenge in depicting the dwarfs, and the most difficult was crafting the Dopey character. They had to make a simple, younger character like the silent prankster Harpo Marx and not a moronic figure. The estimated cost of the movie made 85 years ago was one and a quarter million dollars.

Fundell had a local artist do paintings of Dopey, the other dwarfs and Snow White, all replicas of the Disney drawings. These portraits were hung on the wall of the restaurant. A picture of Dopey was added to a sign in the front of the establishment that he fully purchased in 1944. I have always been amazed that the Disney enterprise did not prevent the eatery from using the character to promote the business.

Early on, to attract attention and customers, Fundell introduced Dopey’s famous footlong hot dogs, which he originally called “bungalow pigeons.” These oversize dogs were made by Wohrle’s in Pittsfield.

However, after five years peddling the footlongs, Fundell came to the realization that they were just too long for youngsters to eat and too expensive to make. Hence, he switched to 9-inch hot dogs and promoted then as Dopey’s famous hot dogs.

Yet to this day, customers still call them footlongs. In addition to the hot dogs, the menu included the basics of the day, burgers, fries, shakes, etc.

For a few years in the late 1940s, Fundell leased the restaurant to Donald Griffin who named it Griff’s. In 1949 Fundell took over the eatery again and renamed it Dopey’s and brought back the decor, including the Snow White and the seven dwarfs paintings.

In the 1950s with the increase use of automobiles, the eatery added the popular carhop service. By the 1960s, Enar’s stepson, Guy Bugbee, took over operating Dopey’s while Enar and his wife wintered in Florida.

In 1968, ready to retire, Enar Fundell, sold Dopey’s to the family of Helen and William Zurrin Sr. The Zurrin’s children, William Jr. and Summer (Henriette) Ostellino and their spouses, took over the operation of Dopey’s. Shortly after the purchase, William Jr. also bought the Penguin Drive-in on the Pittsfield-Lenox Road, where the family introduced the famous Dopey’s footlongs.

Summer, shared with me a signed photo by a favorite customer at Dopey’s that was none other than “the man in black,” musician Johnny Cash. He frequented the restaurant many times in 1969 and 1970 when acting in a movie with scenes filmed at the former Brodie Mountain Ski Area.

The film, “Trail of Tears,” was about the government’s tragic removal of 15,000 Cherokees from their tribal lands in five southeastern states to Oklahoma in 1838. In his first Hollywood dramatic role, Johnny played the role of John Ross, the Chief of the Cherokee Nation.

Johnny loved the tasty chili at Dopey’s made by the family matriarch, Helen Zurrin. On his frequent visits the celebrity tried to get Helen to reveal her secret to the chili. One time he even offered to buy all the antiques in the eatery just for the recipe. Helen never revealed that the secret ingredient she used was simply caraway seeds that gave it the tasty flavor.

In 1976, Dopey’s was sold to Bob Oparowski, who renamed it, Bob’s Country Kitchen. Bob had no cooking experience, but his parents pitched in and expanded the menu to include a variety of soups, seafood dishes, steaks, chicken and desserts like pies, puddings and strawberry shortcake.

Bob’s Country Kitchen was remodeled in 1982 to seat 66 patrons, and though not a fancy place, it had become one of the area’s most popular eateries. After 24 years as the operator, Bob sold the restaurant in December 2000 to Peter McGuire, a retired Pittsfield police detective. McGuire kept the eatery’s name, staff and the same menu.

The restaurant is still thriving today under the ownership of Peter’s daughter Michelle. You can still get the Dopey’s famous footlong (9 inch) hot dogs there with choice of embellishments such as cheese, chili, sauerkraut and the tasty kapusta. I have always stopped at Bob’s on my visits to the Berkshires.

The food is great, but I also enjoy seeing the paintings of Snow White and the seven dwarfs, nicely restored and still on the wall; a nostalgic reminder of my childhood visits to Dopey’s for footlongs.