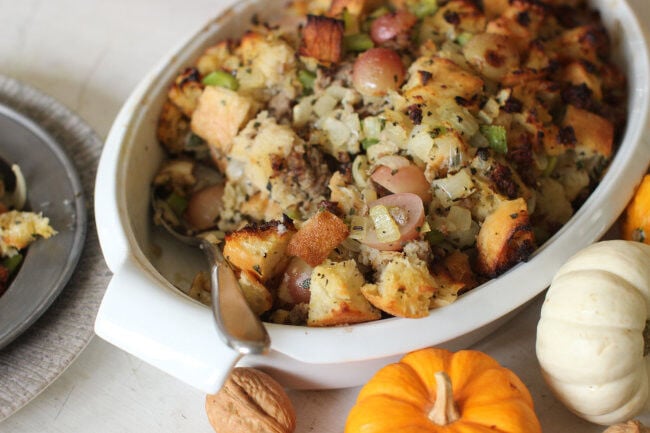 Above, sausage and grape Thanksgiving stuffing. 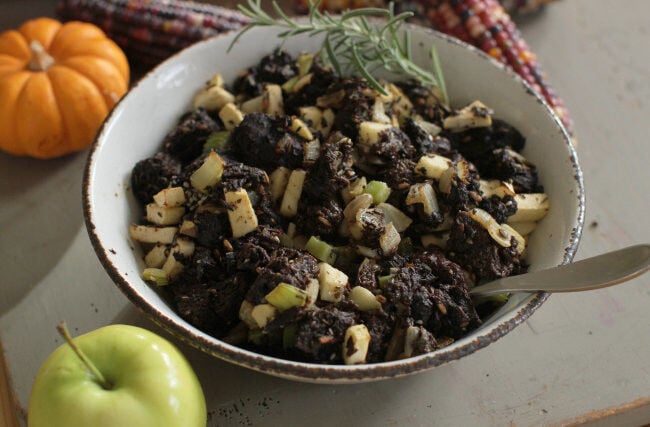 Making one giant batch of stuffing allows for some of it to be used to stuff the turkey, while the rest can be put into a well-buttered baking dish. Above, seeded rye and apple Thanksgiving stuffing

Above, sausage and grape Thanksgiving stuffing.

Making one giant batch of stuffing allows for some of it to be used to stuff the turkey, while the rest can be put into a well-buttered baking dish. Above, seeded rye and apple Thanksgiving stuffing

To brine or not to brine? High heat or low and slow? Jellied or whole berry? And of course, to stuff or not to stuff?

They are, of course, the perennial Thanksgiving debates. So let us give you a little clarity this year. And if your relatives disagree and want to argue about it, you can blame us.

If you have the space and time, brining is fine. If you don't, it's not worth the trouble (and you can replicate the results by just dumping a bottle of soy sauce over the bird before and during roasting anyway). For temp, start high, then cut it back to finish low and slow. As for the berries... Are you older than 10? Then whole berries are the only option.

Ah, but the stuffing. That one is more complicated. It's hard to argue with the fact that a stuffed bird is more beautiful. Not to mention the stuffing from a stuffed bird packs way more flavor. Of course, if you don't cook it properly, that flavor also packs a fine chance of food poisoning. And then there is the trouble and mess of doing the actual stuffing, and the fact that you've now rendered the dish unfit for any vegetarians at the table.

So we advocate having it both ways. Make up one giant batch of stuffing, then use part of it to stuff your bird while popping the rest into a well-buttered baking dish. The trick to keeping the stuffed stuffing safe to consume is to make sure it is hot when it goes into the cavity of the turkey (and using a thermometer to make sure it reaches 165 F at the center by the end of cooking).

As for the baking dish batch, keep it moist and delicious with a little extra broth drizzled over the top. If there are vegetarians in the mix, be sure to use vegetable broth. No veggies at the table? Ditch the extra broth and instead drizzle the finished stuffing with some of the pan drippings from the roasted turkey. Chances are that batch will be even more flavorful than the stuffing that was actually stuffed.

Now that you're prepped to stuff (and not), we've got you covered with a master recipe for classic bread stuffing, as well as four ways to adulterate it most deliciously.

In a large deep skillet over medium, melt the butter. Add the onion and celery and cook for 5 to 7 minutes, or until the onion is translucent and tender. Add the broth, salt, pepper, sage, thyme and rosemary. Bring to a simmer. Remove from the heat and gently stir in the bread cubes. If desired, reserve some for stuffing the turkey. Transfer the remaining mixture to the prepared baking dish and bake for 20 minutes, or until the top is toasted.

Stuffing that is cooked in the bird must reach 165 F by the end of cooking. Use an instant thermometer inserted into the center of the stuffing to get an accurate reading. Stuffing that is cooked in a baking dish should be drizzled with pan drippings from the roast turkey just before serving (unless it is intended for vegetarians). The stuffing also can be modified with the following variations:

Brown 1 pound of loose breakfast sausage in the butter before adding the onions and celery. Stir in 1 1/2 cups of halved red grapes when adding the bread cubes.

Toast 2 tablespoons caraway seeds and 1 tablespoon fennel seeds in a dry skillet until fragrant. Add with the butter and proceed with the recipe. Use marbled rye or pumpernickel for the bread cubes, along with 2 peeled, cored and diced apples.

Add 3/4 cup dried cranberries and 1 cup lightly chopped roasted and peeled chestnuts along with the breadcrumbs.

Beat two eggs and 1/2 cup heavy cream together in a bowl. Whisk a ladle of the warm broth mixture slowly into the egg mixture. Remove the pan of broth mixture from the heat and add the egg-broth mixture back into it. Mix well. Use brioche or challah for the bread cubes.

23 recipes to grace your Thanksgiving table