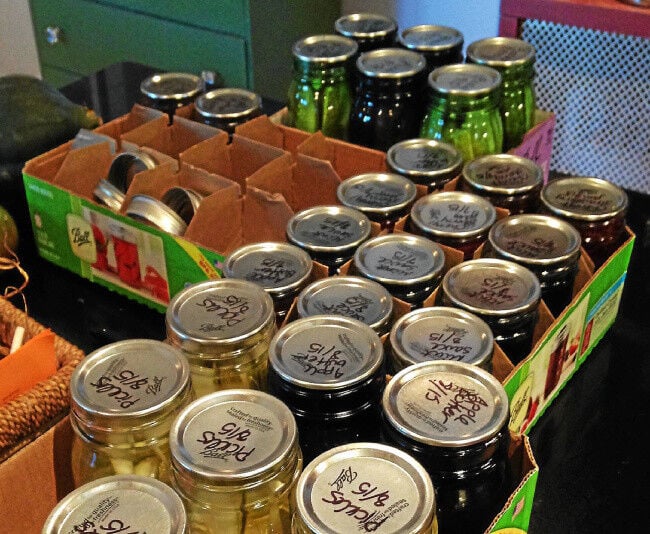 Excess apples can be preserved as apple butter or pie filling. 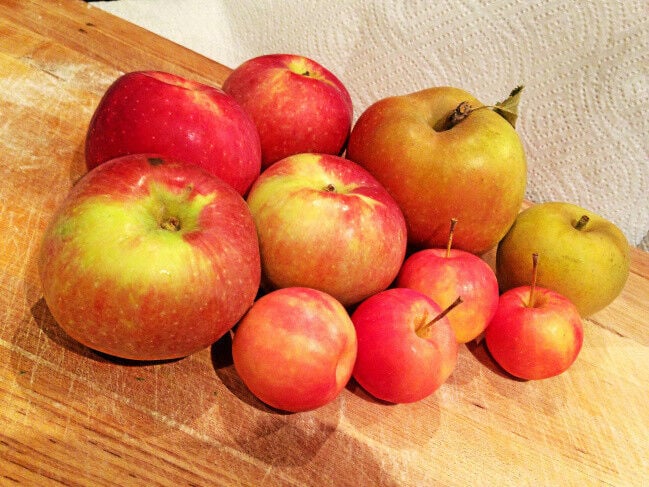 In addition to classics like Macoun and McIntosh, many orchards offer other interesting apples.

Excess apples can be preserved as apple butter or pie filling.

In addition to classics like Macoun and McIntosh, many orchards offer other interesting apples.

I've seen this sentiment come up in my Facebook feed over and over again in the past few weeks: People go apple-picking, come home with about 100 apples, make a crisp or a pie, and then shrug. What to do with the rest?

I've been there, too. A couple of weeks ago, my husband and I went on a wonderful, archetypal apple-picking date to Scott Farm in Dummerston, Vt., a beautiful orchard where more than 100 heirloom varieties grow. In addition to a half-bushel of classics like Macoun and McIntosh, we also assembled a half-peck of interesting fruits — teeny, tiny tart apples with pink skin; pale green apples the size of a toddler's fist with a distinct pineapple overtone; apples the size of a softball with a crispy, acidic snap. I started using them up right away by making three cakes, which used about six apples. Bummer. Apple overload.

So, sure, you can make a crisp and then just stare at your apple bounty until it rots, or you can take action and preserve it, filling your freezer for winter!

As you may know from past columns, I hate food waste. CNN Money recently reported that the average American wastes $640 worth of food every year. So sad, for so many reasons — other people in our country go hungry while good food is trashed, we waste our hard-earned money, etc. So, I have two recipes for you that go beyond that crisp: One big-batch apple pie filling that you can freeze, and a really wonderful slow cooker apple butter recipe that not only uses up a bunch of apples, but the skins as well. Each of these recipes will use 25 to 30 apples each.

I've now canned about 14 half-pint jars of apple butter, of which I'll use some and also give away. I have six pies' worth of filling in the freezer, too — so this Thanksgiving, all I'll have to do is make some crusts and I'll be set.

Wash, peel and slice apples. Remove cores and place apples and peels into a crockpot. Add your liquid, and cook, covered, for 10 hours (I recommend you let this sit overnight).

When crockpot is done, use an immersion blender to puree the apples until everything's completely smooth in there, then add brown sugar and cinnamon, making sure it's completely incorporated. Cook for another 8 to 10 hours with the crockpot lid on, but so there's a little open space to let steam escape. No need to stir.

(SBCanning recommended putting chopsticks on top of the crockpot, then placing the lid on the chopsticks. I did this and it worked great.)

You can freeze this apple butter, but you can also can it. Use ¼-inch headspace and process in a water bath 5 minutes for half-pints and 10 minutes for quarts.

Juice of one lemon

Toss apples with lemon juice and set aside.

In large stockpot (I used the big aluminum pot my husband uses to brew beer), mix water, sugar, spices, salt, cornstarch, and bring to a rolling boil, stirring constantly. Let this mixture thicken — this will take about 5 minutes, maybe longer depending on your stove top.

Add apples, bring to a boil again, then turn heat down and simmer for 8 to 10 minutes, or until apples are soft. Let mixture cool, and ladle into containers. Freeze up to six months. Makes filling for five to seven pies, depending on your pie plate's size.