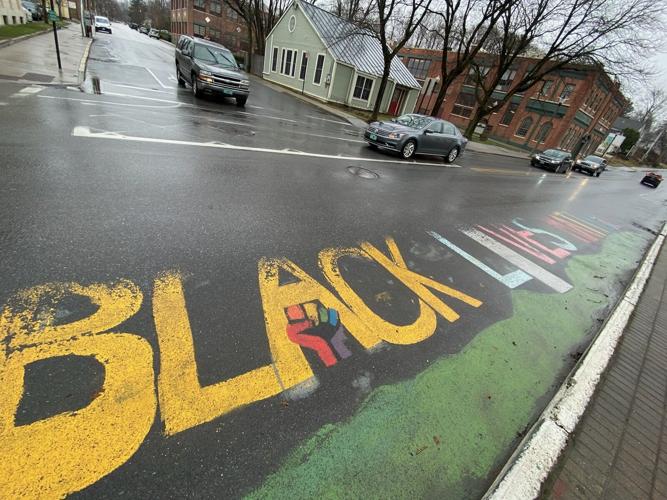 Bennington’s Black Lives Matter mural is shown damp from the rain on Thursday morning. Police said the street art was defaced Wednesday evening with chalk-like writing, which has since been removed. 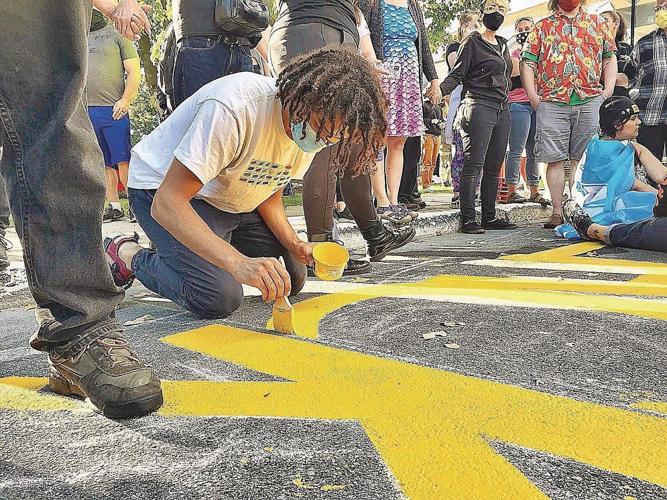 An artist works on the Black Lives Matter street mural Aug. 30 in front of the Bennington town offices.

Bennington’s Black Lives Matter mural is shown damp from the rain on Thursday morning. Police said the street art was defaced Wednesday evening with chalk-like writing, which has since been removed.

An artist works on the Black Lives Matter street mural Aug. 30 in front of the Bennington town offices.

BENNINGTON — Police are looking for three juveniles suspected of vandalizing Bennington’s Black Lives Matter mural on Wednesday evening — the first such incident since the street art was created last summer.

The chalk-like markings weren’t around for long: members of the public mopped away the graffiti that same night.

The suspects — two females and one male — were caught on surveillance video defacing the South Street mural around 7:30 p.m. Wednesday, according to the Bennington Police Department. The mural is located in front of the town office, across from the police station and its surveillance cameras.

A video screenshot provided by town police showed some of the painted letters crossed out and others written over, including with an expletive. “White Lives Matter,” “All Lives Matter” and its abbreviation, “ALM,” were also written around the original text.

“No permanent damage has been done to the mural,” Bennington police Lt. Camillo Grande said.

Because the suspects are minors, the police department declined to immediately release their pictures. “We’re trying to use other methods to identify them,” Grande said, adding that investigators believe the suspects live in the Bennington area because they had a “very young girl” in tow.

Nienna Rose saw the graffiti shortly before 8 p.m. Wednesday, after a friend texted her about seeing somebody “drawing” on the mural. Rose immediately went on social media, asking who could help her clean it up.

Five fellow Bennington residents, including someone she didn’t know, showed up. They went to work with a mop, gallons of water and a couple of brooms.

“I wanted to take care of it as quickly as possible,” Rose said in an interview Wednesday. “It was upsetting that, regardless of whether they may have been teenagers, they have bought into that rhetoric that only espouses hate.”

Rose said they were done cleaning the mural in half an hour, including sweeping street debris off the artwork that she witnessed being painted by volunteers on Aug. 30.

It was apparently while she and her brother began removing the graffiti that Bennington police became aware of the vandalism. A police dispatcher noticed some people “doing something” with the mural and asked a patrol officer to look into it.

“Defacing a public mural, particularly one with such significance, is completely unacceptable,” she said in an email Wednesday afternoon. “The painting of the Black Lives Matter mural had the full support of the Select Board and that support continues.”

When asked whether the graffiti could lead to police charges, Grande said the BPD will work closely with the Bennington County State’s Attorney’s Office to determine if criminal charges should be filed once the suspects are found.

Mary Gerisch, part of the group that organized the mural painting and that is tasked with its maintenance, thanked the people who cleaned up the graffiti.

She also expressed appreciation for the Bennington Police Department’s investigating the incident before her group had a chance to ask. She explained that mural organizers didn’t know how much town police supported the project — which some residents oppose and which certain people see as a statement against law enforcement. The mural painting, designed as a public event, was marred by protests that led to arrests.

“It’s very good to see that they are supporting the preservation of the project,” Gerisch said of the BPD.

Gerisch sees the vandalism as a teachable moment. She said fellow Benningtonians can use this as an opportunity to speak with family members, friends and acquaintances about the ills of racism.

Mia Schultz is thinking along the same lines. A town resident and head of the Rutland Area NAACP, Schultz said that once the juvenile suspects are found, they can undergo educational and restorative programs that “help mitigate some of the hate.”

The authorities, she said, shouldn’t minimize the mural defacement even if it’s the work of juveniles. “It means we have a culture that just wants to cast aside racist attacks,” she said, “and people of color just have to absorb those attacks.”

The Bennington Police Department is asking people with any information about the incident to call 802-442-1030.

Anonymous tips can also be sent through the police department’s website, at benningtonpolice.com/crime-tips.