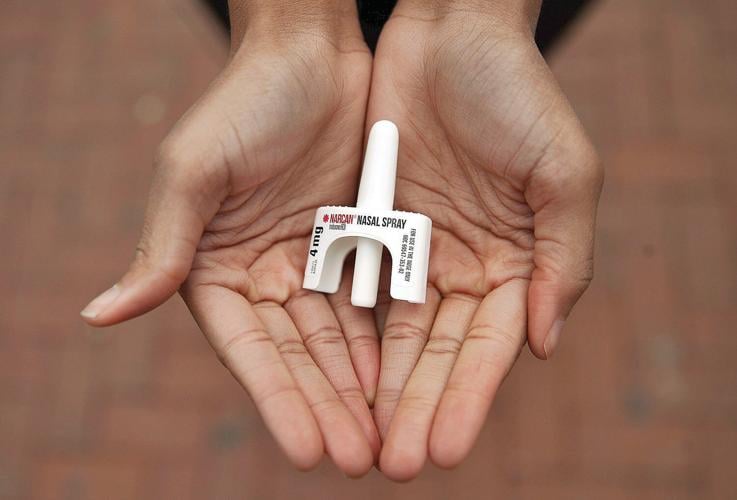 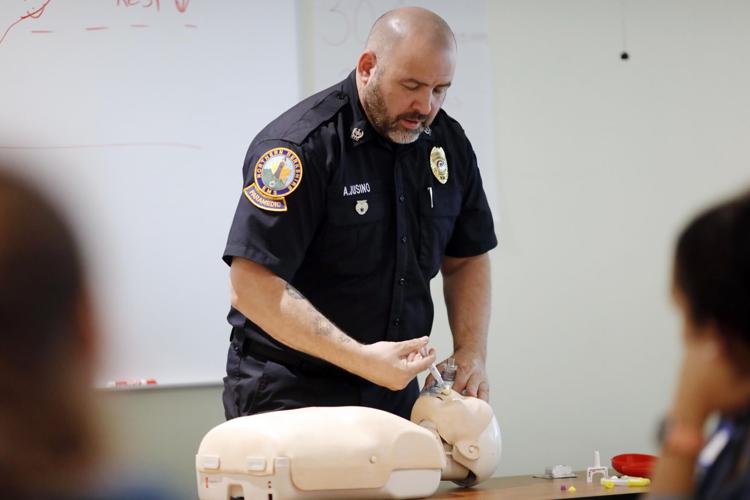 It’s a nightmare for people trying to save lives amid the opioid epidemic: someone overdoses, and, when the first responders arrive on the scene, they can’t help — because they aren’t carrying Narcan.

By the time help arrives, the person has died.

That’s a case that state Rep. William “Smitty” Pignatelli, D-Lenox, heard about several years ago. And he wants to make sure it never happens again, with a bill that would require first responders across Massachusetts to carry naloxone.

Naloxone, commonly known under the brand name Narcan, is a powerful opioid antagonist that can reverse an overdose, and has been hailed by addiction advocates for saving lives.

In the last few years, it has become increasingly common to find the drug in the cruisers and pockets of Berkshire County police officers, from North Adams to Great Barrington.

But a handful of the county’s larger police departments – including Pittsfield, Lee and Lenox – do not carry Narcan, relying on EMS and other emergency personnel to administer doses when necessary. Some fire departments also do not carry the drug.

Advocates say that could endanger lives in situations where emergency responders without Narcan arrive first to an overdose call.

“Every minute counts, every second counts,” said Jennifer Michaels, medical director of the Brien Center. “I’ve heard of people overdosing in our community, EMS is not there, police don’t have Narcan, and the person dies.”

Pignatelli’s bill, the “HOPE Act” — helping overdosing persons in emergencies — would mandate that all first responders carry an opioid antagonist, such as Narcan, on their person or in their vehicles. The requirement would be contingent on availability of the drug, which has seen some recent national shortages, and it would be the department’s responsibility to outfit staff with kits.

The bill, which Pignatelli has previously introduced, would have little impact on departments already accustomed to using Narcan. But it could mark a turning point for some of the county’s first responders.

Legislators and speakers will discuss Pignatelli’s bill, among other opioid-related measures, at a House hearing at 1 p.m. Monday. The livestream will be available at malegislature.gov.

Three do not: Pittsfield, Lee and Lenox.

Across the county, nearly 60 percent of first responders do not carry Narcan, according to Pignatelli. That includes many police departments in smaller towns, as well as some fire departments, largely those with volunteer firefighters.

Those numbers could see a dramatic increase in the coming months, thanks to an ongoing effort by the Berkshire Opioid Abuse Prevention Collaborative, which is offering the drug to departments at no cost through state and federal funding. The project is ongoing and will include municipalities across the county.

In statements to The Eagle, several police departments that do not carry Narcan cited financial, logistical and regulatory concerns.

Doses typically cost between $20 and $40, though some funding sources are available, such as BOAPC’s effort. The drug is also supposed to be kept at a relatively stable temperature — ideally between 59 and 77 degrees Fahrenheit — and not be exposed to extreme heat or cold. It has a shelf life of about 18 months.

The Pittsfield Police Department told The Eagle it keeps a limited supply at its headquarters “for the booking room and specialty units” but that officers do not carry Narcan in cruisers.

“We have considered Narcan previously,” Lt. Gary Traversa wrote in an email to The Eagle. “But funding, regulations around possession, and other logistical hurdles have prevented us from being able to move forward. Also, having a full-time EMS system in the city has mitigated the necessity for Pittsfield Police Officers to carry it.”

He also said the department would not be able to take advantage of BOAPC’s funding “until we work out how to safely carry it without exposing it to extreme temperatures.”

The number of departments carrying Narcan could increase dramatically in the coming months.

The Berkshire Opioid Abuse Prevention Collaborative (BOAPC) is working to outfit first responders, including police and firefighters, with Narcan, using state and federal funding as part of a broader overdose response project.

The program is available to all departments that do not yet carry Narcan, said Jennifer Kimball, principal planner with the Berkshire Regional Planning Committee and BOAPC coordinator.

“We’ve had first responders across the county who want to take advantage,” Kimball told The Eagle. “We’re very happy about that.”

Peru and West Stockbridge are among the towns working with BOAPC to begin carrying Narcan in the near future, chiefs for those departments confirmed.

Funding for the work comes from a Bureau of Substance Addiction Services and a partnership with the Northampton Health Department, with the Narcan funded through a Comprehensive Opioid, Stimulant and Substance Abuse Program grant.

Advocates argue that carrying Narcan is relatively cheap, with costs that can often be offset through bulk purchasing and state funding programs, and that it is critical to ensure the first person on the scene can administer the drug.

“Especially in the rural areas of Massachusetts, which we’re in, sometimes when you call 9-1-1 you don’t know who’s gonna be the first first responder to show up,” said Pignatelli. “Chances are they could be coming from their house, driving to the scene, waiting for the ambulance or the police car or the fire truck to arrive.”

Departments that do carry Narcan say they have been able to equip officers with the drug with relatively little inconvenience.

Adams Police Chief Scott Kelley told The Eagle that his officers carry Narcan because they know they might be the first person on the scene. “If we can bring someone out of an opioid overdose with a spray of Narcan, that’s what we’re going to do,” he said. “It’s not something that I wouldn’t do because of cost.”

In Williamstown, interim Police Chief Mike Ziemba said it was “another service” the department could provide and that officers have been able to revive people using the drug.

Advocates say the drug is not only relatively simple to use and store, it’s also a critical tool in the fight against opioid deaths, at a time when fatalities have hit record levels across the county and in the Berkshires.

Nearly 100,000 people died from drug overdoses during the first year of the pandemic, the Centers for Disease Control and Prevention announced recently. The vast majority of drug overdose deaths in the U.S. involve opioids.

In Berkshire County, 56 people died of opioid overdoses in 2020, a 44 percent jump from the previous year.

For Michaels, those numbers underline the reality of the crisis, and how important it is to deploy every available tool.

“I think police are probably very burdened with a lot of responsibilities,” she said. “I’ve heard concerns about storage. Naloxone, you can’t just leave it in your car if it’s below a certain temperature. And it expires and has to be replaced. But these are all things we’ve all dealt with for years and years. It’s a responsibility that we take to serve our community.”

Michaels pointed out that the drug is easy to administer and cannot harm someone who is not experiencing an opioid overdose.

Administering a dose of Narcan during an overdose gives that person another shot at reclaiming their lives, she added.

“People who struggle with addiction, usually, at some point, they’ll seek treatment,” she said. “If you’re helping save their life, you’re helping them get that much closer to potentially getting into recovery.”

She also stressed that people can overdose even when they don’t think they are taking opioids, given the prevalence of fentanyl, a synthetic opioid 50 times stronger than heroin.

“We’re seeing people who are purchasing what they think are benzodiazepine pills, or cocaine, but they’re actually buying a product laced with fentanyl,” she said. “People who are buying virtually any substance off the street are at risk for opioid overdose.”

For her, that makes Pignatelli’s legislation an obvious step forward. “I think this is overdue,” she said.

Pignatelli pointed out that many departments have been able to overcome the hurdles involved with carrying Narcan, including local police, state police and Boston police.

And, he added, the drug has even saved lives of first responders exposed to fentanyl dust. “I think the time has come to require it,” he said. “And I have not heard a legitimate excuse yet why they would not.”

Our Opinion: First responders should be carrying Narcan

Holistically addressing the addiction crisis is a big and complex task, but there is something relatively simple that can be done to save live…

As lawmakers promote nonopioid alternatives to pain treatment, state Rep. William “Smitty” Pignatelli says he would like to see support for alternative treatments combined with his push to equip all first responders with naloxone.

Health Take-Away: Vulnerable Berkshire County needs to keep up the fight against HIV

While the HIV/AIDS crisis that gripped the nation in the last two decades of the 20th century may seem to have been put on the back burner of social health concerns these days, Berkshire County and other regions of the country remain highly vulnerable to the infection and must continue to take vigilant, active steps to prevent a full-scale outbreak.

Earlier this year, The Eagle editorial board called for first responders across Massachusetts to carry naloxone as a mitigating measure agains…