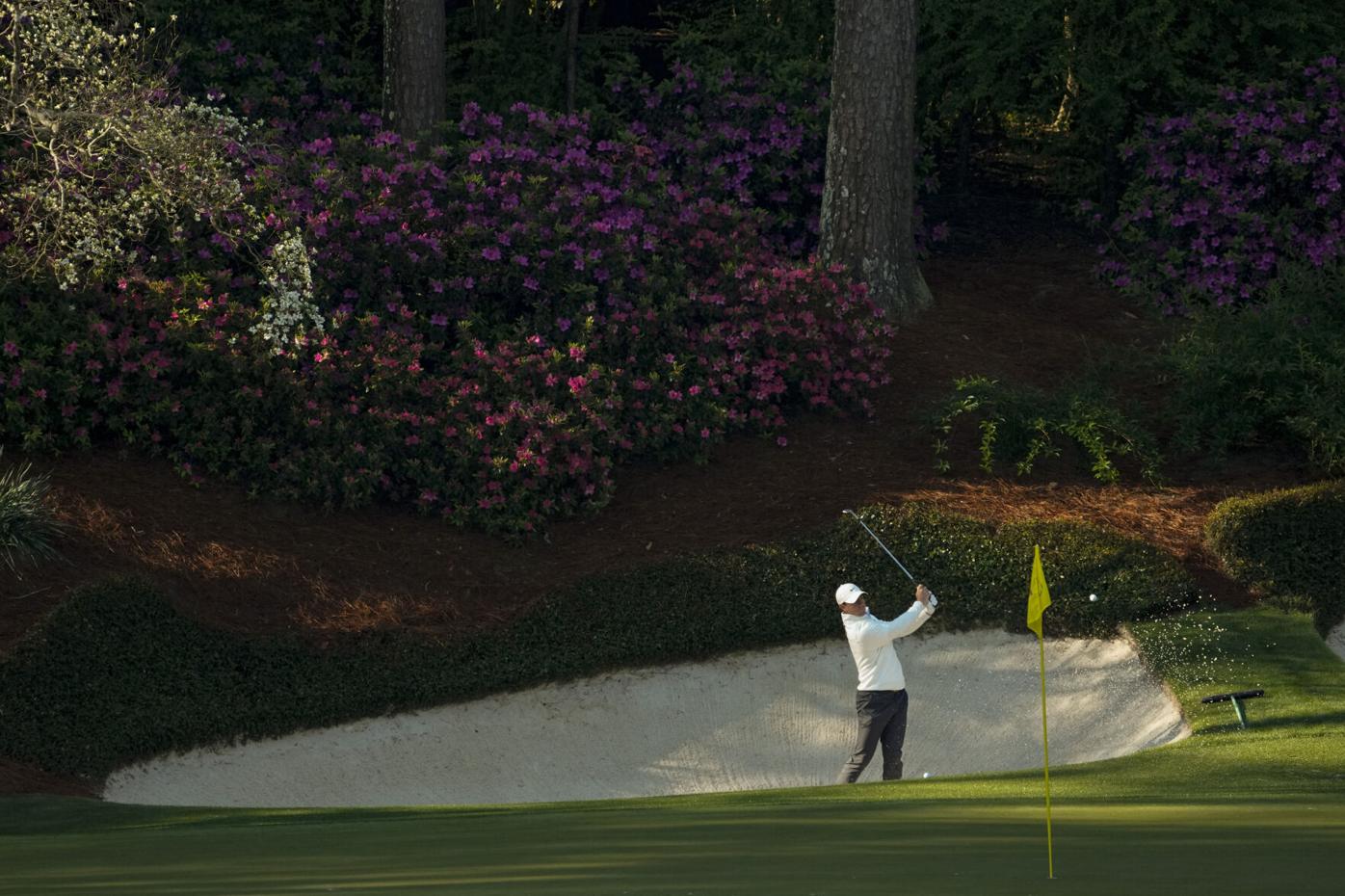 Rory McIlroy hits from the bunker on the 13th hole during a practice round for the Masters on Tuesday. 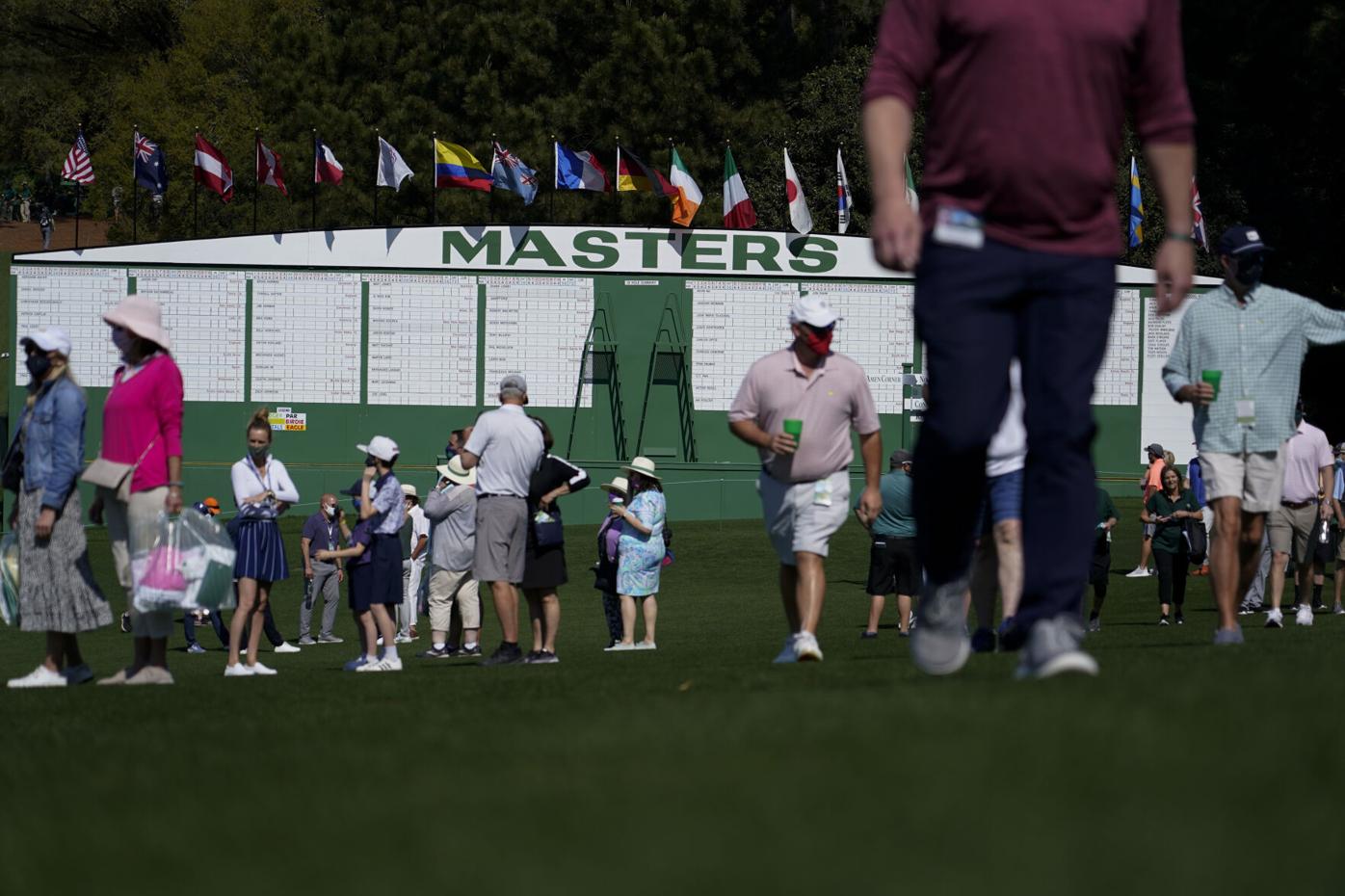 Welcome back, patrons. Welcome back, Masters in the springtime. Welcome back, all things at Augusta National that bloom this time of year and provide the backdrop for perhaps the most picturesque locale in golf. There are new rules — masks must be worn, social distancing policies apply and there’s no eating or drinking around the roped-off spots closest to the greens — but after a one-year pandemic-caused absence, fans are back at the Masters. 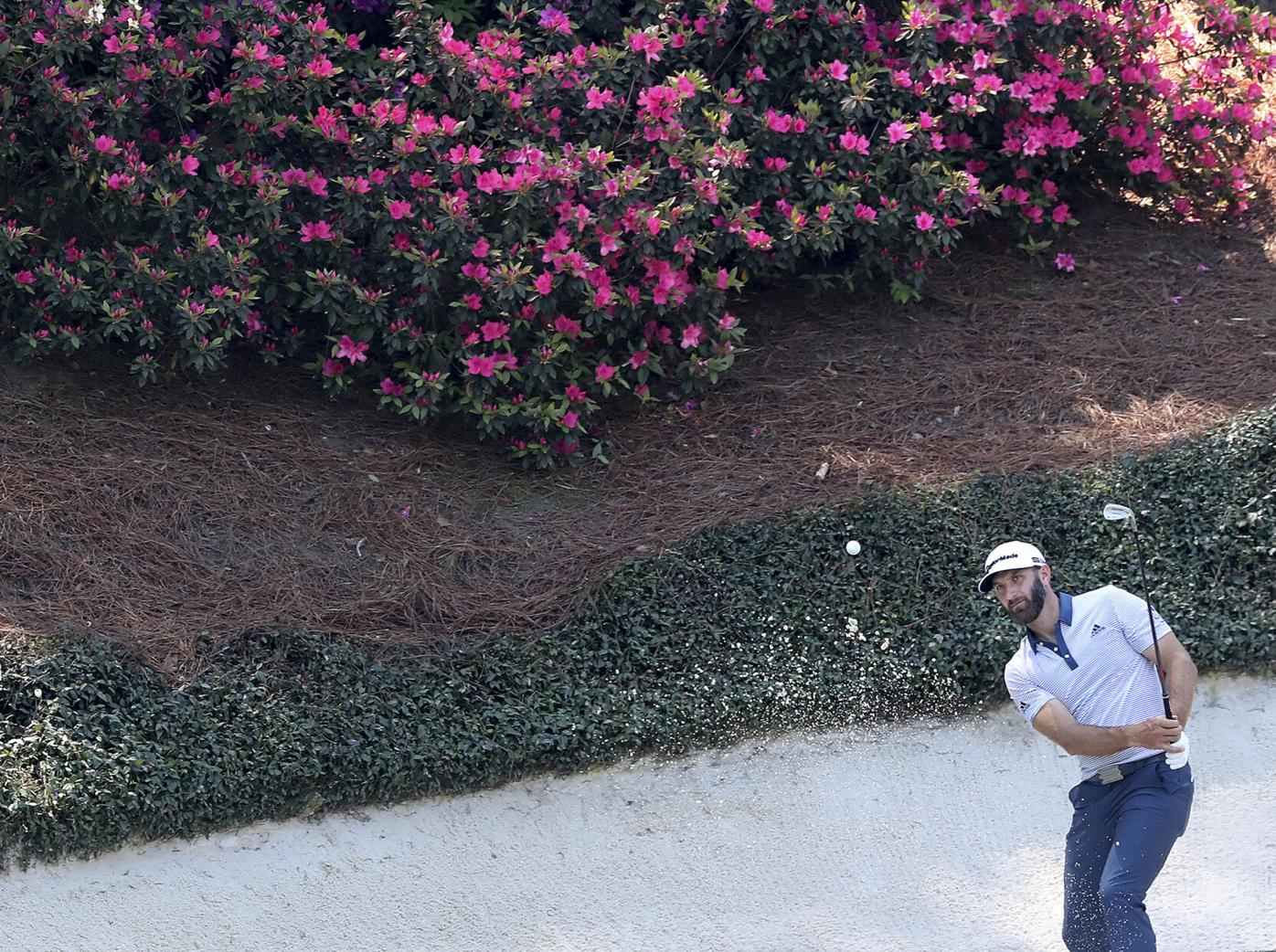 The azaleas are beginning to pop as Dustin Johnson hits his bunker shot to the 12th green during his practice round on Tuesday.

Rory McIlroy hits from the bunker on the 13th hole during a practice round for the Masters on Tuesday.

Welcome back, patrons. Welcome back, Masters in the springtime. Welcome back, all things at Augusta National that bloom this time of year and provide the backdrop for perhaps the most picturesque locale in golf. There are new rules — masks must be worn, social distancing policies apply and there’s no eating or drinking around the roped-off spots closest to the greens — but after a one-year pandemic-caused absence, fans are back at the Masters.

The azaleas are beginning to pop as Dustin Johnson hits his bunker shot to the 12th green during his practice round on Tuesday.

AUGUSTA, Ga. — Rory McIlroy stopped by to encourage Tiger Woods as he recovers from multiple leg injuries and might have come away with some inspiration of his own.

“In his family room he’s got this trophy cabinet and it’s his 15 major trophies,” McIlroy said Tuesday. “I said, ‘That’s really cool. Where are all the others?’ He said, ‘I don’t know.’”

Woods — who isn’t playing this year because of injuries from a car crash in February — has 82 victories on the PGA Tour alone, a record he shares with Sam Snead, and more than a dozen others from the European, Asian, Japan and Australian tours.

“He said, ‘Yeah, my mom has some, and a few are in the office and a few are wherever,’” McIlroy said. “I was driving home and I was thinking, ‘That’s all he cared about. So how easy that must have felt for him to win all the others.’ That was just always in my mind. He talked about, ‘These are the four weeks that matter.’”

Only one week matters to McIlroy at the moment, and not just because it’s the first full week in April at Augusta National.

The Masters — Woods has five of those silver trophies — is the one major keeping McIlroy from joining the most elite company in golf by completing the career Grand Slam. Woods was the most recent in 2000. The others are Jack Nicklaus, Gary Player, Ben Hogan and Gene Sarazen.

He isn’t alone in his pursuit of trying to join an exclusive group.

McIlroy played his first practice round of the week with Dustin Johnson, the defending champion who established the scoring record of 20-under 268 in November when the course was much softer.

Only three other players have won the Masters back-to-back. Woods — him again — was the last to achieve that in 2002. Johnson isn’t much on history, but he knew that one.

He also knows it won’t be easy.

“You’re going to have to put four good rounds together, especially with normal conditions,” Johnson said. “You’ve got to do everything well. And with it firm and fast, it’s just a really hard golf course because any hole at any time can jump out and get you.

“It just very tough to win once, and especially multiple times.”

Those two words — firm and fast — are being mentioned about as much as green and jacket, and for good reason. Even with the tournament two days away from starting, shots landing on the greens are making a hollow sound that indicates this won’t be target practice.

“It was obviously still the same golf course tee-to-green, but it was a different golf course at the same time,” Thomas said after a Tuesday practice round with McIlroy. “Any sort of past memory that you had, you almost had to throw it out the window.”

McIlroy has a mixed bag of memories. It’s hard to overlook 2011, when he was 21 and had curly locks spilling out from under his cap. He built a four-shot lead going into the last round and was on the verge of winning his first major until a series of big blunders — a tee shot into the cabins left of No. 10, a four-putt on No. 12, a tee shot left of the Rae’s Creek tributary on No. 13. It added to an 80.

Good and bad, he tries to draw from both.

Different about this year is the state of his game. McIlroy hasn’t won since Shanghai in the fall of 2019, and he got caught up chasing speed and distance after watching Bryson DeChambeau overpower Winged Foot to win the U.S. Open. With his longtime coach unable to travel as much, McIlroy said he has brought on famed English instructor Pete Cowen.

He talked about a “big picture” at Augusta, not a sense of urgency.

“I’m obviously focused on this week, but it’s bigger than that,” McIlroy said. “It’s a journey, right? And it’s a journey to try to get back to playing the game the way I know that I can play the game.”

The lesson imparted from Cowen is to not to look back at what he’s done in a bid to go forward. McIlroy has won four majors — the PGA Championship twice, the U.S. Open and the British Open — though he is approaching the seven-year anniversary of his last major title.

He not under as much scrutiny as recent years, certainly not in 2015, his first crack at the Grand Slam.

“It feels a little more relaxed this week, which isn’t a bad thing,” McIlroy said. “Yeah, I would have loved to have done it at this point, but I realize I’ve still got plenty more years to do it. If I were able to do it, I’d join a very small list of golfers in history that have been able to do it. So I know where it would put me in the game and how cool it would be, and I would love to do it one day.”

Golf’s governing bodies, worried players are hitting the ball farther than ever, are proposing changes to equipment and testing standards. Among those paying close attention is Masters Chairman Fred Ridley, who on Wednesday urged the USGA and R&A to “put forward thoughtful solutions as soon as possible.”

But that doesn’t include Augusta National doing something for the Masters. At least not yet.

“I know there’s been some talk in the past of possibly a Masters golf ball or something like that,” said Ridley, a former USGA president. “I would think that would be highly unlikely and would, in my view, be an absolute last resort.”

There also has been talk about Augusta National creating a new championship tee on the 13th, a par 5 that Bubba Watson once reached in two with a sand wedge. There was no talk of that on Wednesday, even though the club has purchased part of adjacent Augusta Country Club and has space to do that.

“Fortunately, we do have the ability to make any number of changes to protect the integrity of the course,” he said. “At the same time, we hope there will not come a day when the Masters or any golf championship will have to be played at 8,000 yards to achieve that objective.”

Ridley said Augusta National prefers to support the R&A and USGA, who set the rules and equipment standards.

“And then if there is no action taken, for whatever reason, then we need to look at other options,” he said.

The tradition of having honorary starters at the Masters goes back to 1963, when Jock Hutchison and Fred McLeod did the initial honors. It has not been an annual occurrence; the Masters has opened on at least eight occasions since without an honorary starter.

Only nine men have taken those tournament-opening swings.

Jack Nicklaus and Gary Player will be back in their roles, and for the first time, they’ll be joined by Lee Elder — the first Black man to play the Masters, back in 1975.

Ridley at last year’s tournament announced a plan to honor Elder by establishing scholarships at Paine College — a historically Black school in Augusta — in his name and to have him join Nicklaus and Player in opening the Masters this year.

“I cannot wait to have the honor of introducing Lee,” Ridley said Wednesday.

Cameron Champ, who’ll be playing in his second Masters, said the addition of Elder to the honorary lineup was “huge.”

“What he had to go through as a human being to play the game and just to endure that for so long ... it shows a lot about him and his character,” Champ said.

That, too, has become a Masters tradition.

Americans were the majority in the Masters fields for each of the first 70 editions. That changed for the first time in 2007 — and hasn’t changed back, making this the 15th consecutive Masters where there were more international players than American ones.

There was some polite applause when Phil Mickelson hit his tee shot on the par-3 16th to about 3 feet earlier this week, and more relatively quiet claps came a few minutes later when he made the birdie putt.

In between, he hit one off the surface of the water.

Among the practice-round traditions at Augusta National during Masters week is one where players sometimes will give in to patron pressure and try to skip a ball off the pond between the tee box and the green. Nobody is completely sure how or when this trend started; Ken Green told Golfweek in 2016 that he came up with the idea.

“My ball just bounced,” C.T. Pan said after he tried it early this week. “Had a low bounce straight into the bank again like last time I did. But I’m getting better at it.”

Rahm famously holed his off-the-water try last year. Martin Kaymer and Vijay Singh are among those who have also pulled off the off-the-water, into-the-cup trick in the past. Even the competitors in the Augusta National Women’s Amateur got into the skipping act last weekend.

“That’s an interesting hole,” Duke junior Gina Kim said after she played the 16th. “I mean, that was the first time I’ve ever skipped a ball across the water, so I found that pretty fun.”

Mickelson’s shot wound up ricocheting off the water’s surface once, then sailing over the rest of the pond and clearing the back of the green by probably 20 yards. A security guard went and retrieved the ball, not long before Mickelson went to his original tee shot and made the putt.

Starting Thursday, skipping won’t be happening. The shots all count when the tournament starts.