LENOX — As town voters prepare to act on the proposed municipal and school district budgets for fiscal 2022, beginning July 1, the Finance Committee has sent up some warning flares while also endorsing the spending plans. 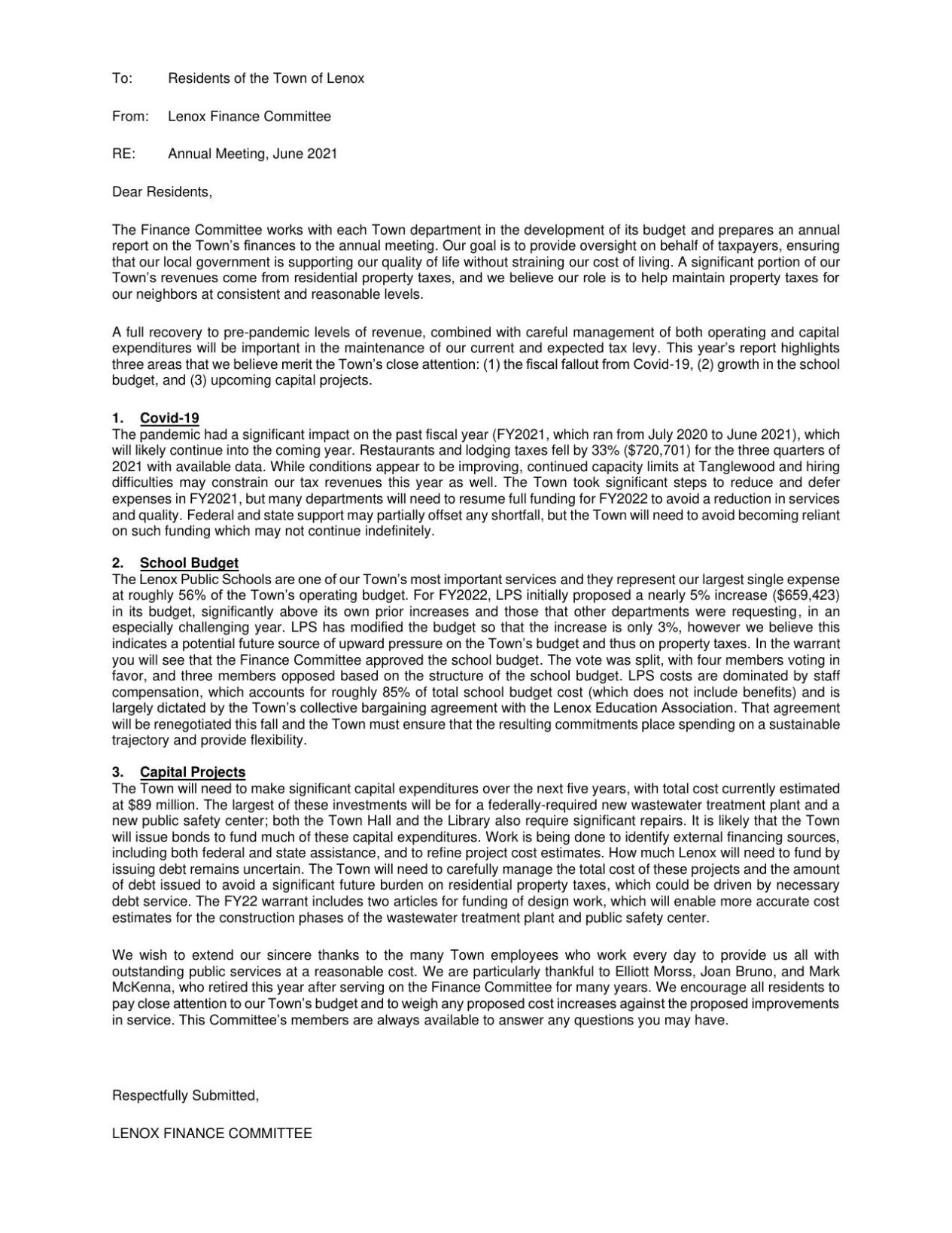 In a series of recent meetings and in a letter for residents, committee members examined the impact of the waning COVID-19 pandemic, expected increases in school spending and potential capital investment borrowing for multimillion-dollar infrastructure projects.

According to the advisory committee’s findings, “The Lenox Public Schools are one of our town’s most important services and they represent our largest single expense at roughly 56 percent of the town’s operating budget.”

Citing the school district’s proposed 3 percent budget increase for the upcoming fiscal year — it’s a reduction from its preliminary request for a nearly 5 percent increase — the Finance Committee, chaired by Kristine Cass wrote that “we believe this indicates a potential future source of upward pressure on the town’s budget and thus on property taxes.”

The committee’s approval of the school spending plan came on a 4-3 vote, with opponents voicing concern about “the structure of the school budget. The costs are driven primarily by staff compensation, which accounts for roughly 85 percent of total school budget costs (which does not include benefits) and is largely dictated by the town’s collective bargaining agreement with the Lenox Education Association.”

Finance Committee members cautioned that since the union’s three-year contract “will be renegotiated this fall, the town must ensure that the resulting commitments place spending on a sustainable trajectory and provide flexibility.”

At a recent meeting, committee member Michael Feder declared that “this feels like a freight train that’s headed out of the station, already doing 60 miles an hour, and it’s just going to blow.”

On the overall budget proposal for town government and the schools, Feder said that “we are not saying the sky is falling, but we are warning you our revenue sources are constrained, our expenses are beginning to grow, our capital plan is very likely to add to that, even if we are able to borrow a substantial portion of what we decide to spend.”

He outlined a scenario that could limit revenue increases for the town, leading to “significantly higher residential property taxes.” But, several other committee members disagreed, pointing out that in the post-coronavirus pandemic era, the town is on an upward swing and that his concerns are speculative.

Agreement emerged on a key sentence for the letter to residents: “A full recovery to pre-pandemic levels of revenue, combined with careful management of both operating and capital expenditures will be important in the maintenance of our current and expected tax levy.”

After vigorous debate, the committee agreed to state in its letter that “while conditions appear to be improving, continued capacity limits at Tanglewood and hiring difficulties may constrain our tax revenues this year as well.”

Feder clarified that his primary focus is on “economic forces that are going to impact the town beyond the immediate future.” He told Chief Administrative Officer Christopher Ketchen that “you’re doing an outstanding job of looking after the taxpayers’ expenses.”

But, Feder voiced frustration over his view that the Finance Committee “is not being used to its full potential benefit.”

He also asserted that the public “is not what I’d consider to be well-informed” and he urged voters to make budget decisions “with some significant collection of facts, make it on an informed basis.”

The letter acknowledges that “the town took significant steps to reduce and defer expenses in FY2021, but many departments will need to resume full funding for FY2022 to avoid a reduction in services and quality. Federal and state support may partially offset any shortfall, but the town will need to avoid becoming reliant on such funding, which may not continue indefinitely.”

On projected capital investment projects, the committee wrote that “the town will need to make significant capital expenditures over the next five years, with total cost currently estimated at $89 million.” Major projects include a federally required wastewater treatment plant upgrade, a new public safety center, and repairs to the town library and Town Hall.

“It is likely that the town will issue bonds to fund much of these capital expenditures,” the letter stated. “Work is being done to identify external financing sources, including both federal and state assistance, and to refine project cost estimates. How much Lenox will need to fund by issuing debt remains uncertain.”

The Finance Committee stated that “the town will need to carefully manage the total cost of these projects and the amount of debt issued to avoid a significant future burden on residential property taxes, which could be driven by necessary debt service.”

“I love that we have put the townspeople on notice,” committee member David Carpenter said, referring to the letter. “It’s right there, you’ve got to read it; maybe everyone won’t read it, but we’ve done a good job putting it out there.”

And, he added, “if we feel something isn’t apparent to the taxpayers, shame on us if we don’t bring it forward in a responsible way.”

Feder urged “a sensitive, not alarmist but informative way” of alerting residents that “we’ve got the school train coming, we’ve got the capital budget getting polished in the train yard, but parts of it are likely to come on out.”

Clarence Fanto can be reached

Budgets at a glance