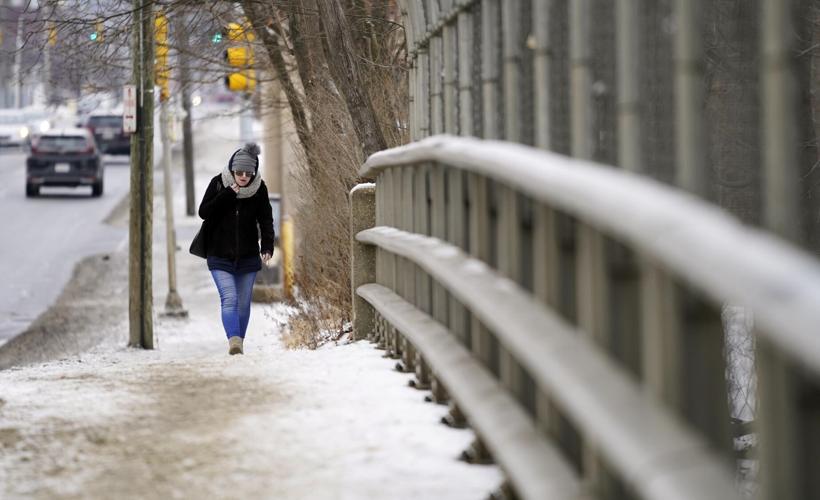 A woman traverses the First Street bridge in Pittsfield on Thursday, while navigating ice on the sidewalk. City efforts to remove ice on sidewalks across Pittsfield didn't come soon enough for some residents, who are worried about whether a repeat is in store, with another arctic blast in the forecast for this weekend. 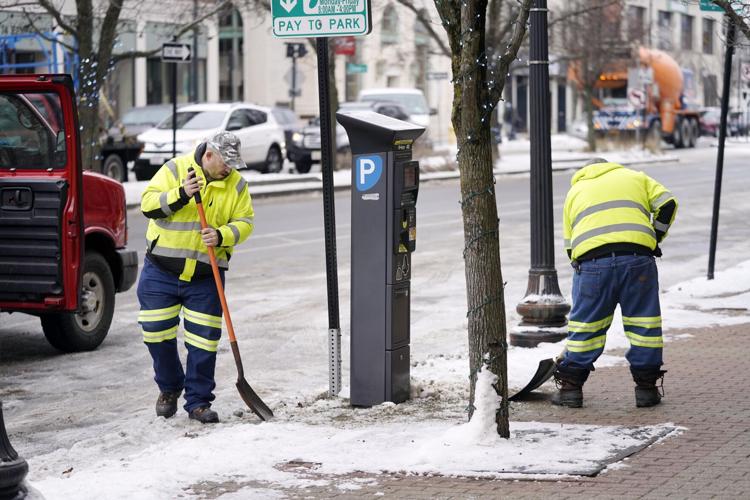 Jason Demary and Chris Martin, of the Pittsfield Highway Department, clean ice from around a parking kiosk along North Street on Thursday. 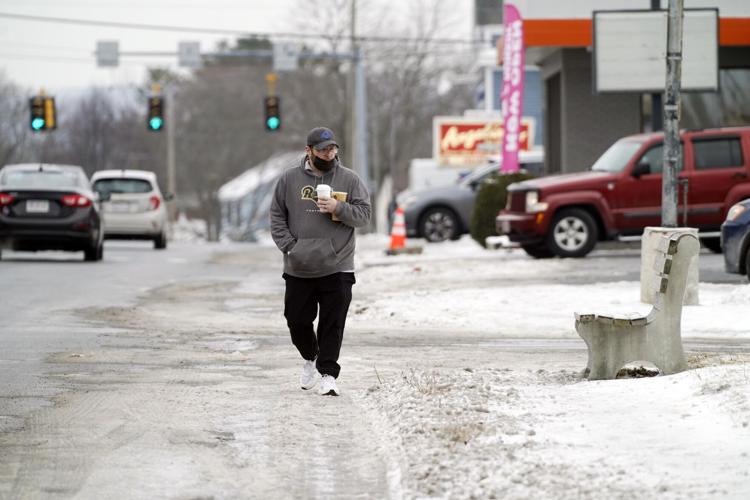 A man avoids the sidewalk along Dalton Avenue on Thursday in favor of the road. Under city code, failure to clear a path can lead to fines from the city's Nuisance Control officer, who starts by giving property owners a warning. Then, fines start at $25 and increase to $100 for subsequent issues. 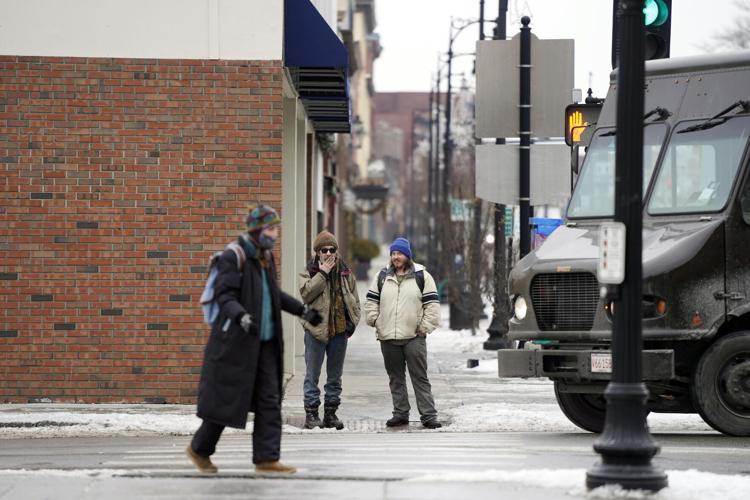 Pedestrians maneuver around ice at North and Columbus streets Thursday. Ricardo Morales, the city's commissioner of Public Services and Utilities, said that over the past week, the department has spent about $143,000 in employee pay, contract pay and material costs to try and clear city sidewalks.

Over the course of several hours, crews worked to carve walkable paths through ice fields left on city sidewalks and in crosswalks from a weekend of freezing rain and subzero wind chills.

“It was crazy,” said Ricardo Morales, the city’s commissioner of Public Services and Utilities. “In the last several years, we have not seen that type of event, and yeah, it took a lot of effort on our side.”

“Our guys — Vinny [Barbarotta, Highway Division superintendent] and his crews — they hate this type of treatment,” Morales said. “They’d rather be treating 18 inches of snow than having to deal with ice.”

Morales said that over the past week, the department has spent about $143,000 in employee pay, contract pay and material costs to try and clear city sidewalks.

But, the shovels didn’t come soon enough for some Pittsfield residents, who are worried about whether a repeat is in store, with another arctic blast in the forecast for this weekend.

Several customers at the Berkshire General Store have been voicing their frustrations with slick paths and parking lots to co-owner Lindsey Tuller. She said the stretch of North Street that is home to her store has been pretty clear, in part because of the building’s landlords, who have treated the storefront with salt.

Tuller said she wanted to see what the talk was about and walked the half-mile along North Street from her store to Linden Street.

“I didn’t feel like my foot was sinking into a pile of snow or that I was about to slip on ice, so, I just I felt like it was pretty well taken care of,” Tuller said, adding that, in her opinion, the conditions down the hill on South Street were worse.

For office workers across the street, it’s a different story.

After four days, paralegal Michele Blaney has figured out the maze of walkable roadways and sidewalks to get from her parking spot at School and North streets to her office at the Brennan Law Offices. The path takes her from the closest handicap parking spot in front of her office, along North Street, then School Street and onto Allen Street to find a curb cut and sidewalk free of ice.

Blaney’s part-time job as a delivery driver for DoorDash takes her all over the city. She says sidewalks in front of most restaurants and private businesses are clear and have been for days. But, around downtown over the past several days, Blaney has gotten used to sheer ice greeting her each morning.

“I’m a personal injury paralegal, so, the first thing I think is, ‘My God, I’m not seeing too much salt on here,’ and you know, it’s called ...” Blaney said. “It’s called a liability.”

Under city code, property owners are required to clear snow and ice from abutting sidewalks “in such way as to render such sidewalk safe and convenient for travel, to a width of 36 inches,” within 24 hours of the weather event.

Clearing city sidewalks isn’t just a city code issue, it’s maintenance that is required by federal law under the Americans with Disabilities Act.

Failure to clear a path can lead to fines from the city’s Nuisance Control officer, who starts by giving property owners a warning. Then, fines start at $25 and increase to $100 for subsequent issues.

“The code says 24 hours after the snowfall [ice needs to be removed],” Public Health Director Andy Cambi said. “That’s kind of been a challenge some years where it’s continuously going over and over and over.”

Added to the challenge this year: Pittsfield’s Nuisance Control officer was out sick when the snow and ice hit.

Cambi said that the department’s other code enforcement officers have been handling complaints as they come in, but so far, they have only had to talk with one resident about icy sidewalks.

Morales said the city tries to step up and cover what he calls gray areas “the bridge crossings, bridges, ramps, refuge islands and crosswalk crossings,” along with municipal properties like city parks, public schools, parking lots and department buildings. “We try to set the example that we need to clear our own sidewalks.”

Julie Berger, a founder of Berkshire Mutual Aid and a disability rights advocate, said the example set by Pittsfield and towns throughout Berkshire County isn’t meeting muster. She said that when supplies and time are limited, city crews will make one pass at clearing the pathways but won’t return to make sure that the result is usable for seniors, wheelchair-based pedestrians or those who use canes.

“Sometimes, people in the winter in the Berkshires are forced to choose between staying home and going without access to resources for their safety, or going out in the community and take the risk of a slip-and-fall injury,” Berger said. “And it’s a terrible position to be forced into.”

Berger said a better practice for Berkshire cities and towns is to be proactive during the winter months, especially about treating and clearing ice and snow so that access is available.

For his part, Morales is reviewing the cleanup and looking ahead to the next winter event — which might hit the city with another bout of ice and snow this weekend and early next week.

“Looking back at how we did things a, snow emergency for parking would have been better to have in place, especially in the downtown area,” Morales said. “It’s the single particular reason why there’s still some ice on the street parking.”

Morales said he is considering new options — including no overnight parking on North Street this coming Sunday night — for clearing roads and for allowing crews to clear sidewalks and crosswalks faster.

After a winter season of residents complaining of snow-covered and icy sidewalks, the city is considering how revamping the snow and ice removal policies could improve safety and accessibility of Pittsfield streets.