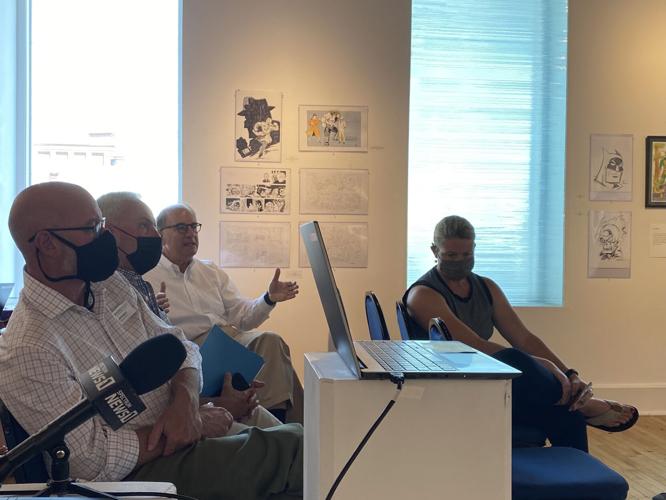 Nick Paleologos, executive director of the Berkshire Theatre Group, tells city officials during a community forum Wednesday that he wants to see continued investment in city programs that were placing cultural organizations as potential "economic drivers" in Pittsfield. 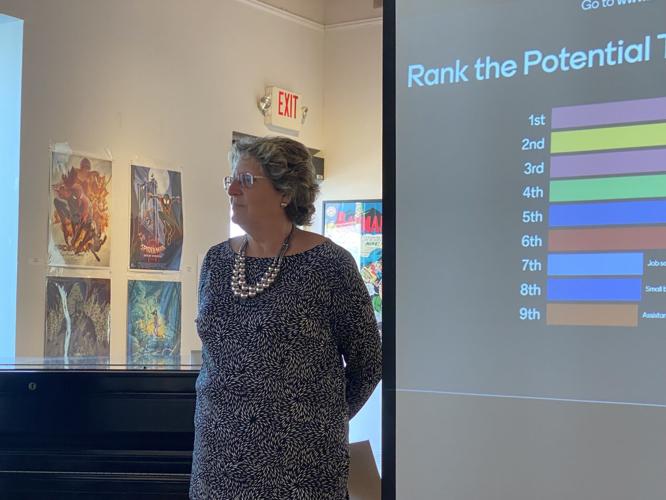 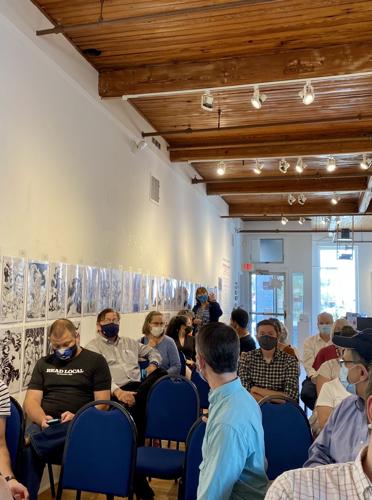 State Rep. Tricia Farley-Bouvier, D-Pittsfield, said during a community forum Wednesday at the Lichtenstein Center for the Arts in Pittsfield that she feels that cultural organizations in Berkshire County "have an unbelievable opportunity" because of the influx of federal coronavirus aid money to the region.

Nick Paleologos, executive director of the Berkshire Theatre Group, tells city officials during a community forum Wednesday that he wants to see continued investment in city programs that were placing cultural organizations as potential "economic drivers" in Pittsfield.

State Rep. Tricia Farley-Bouvier, D-Pittsfield, said during a community forum Wednesday at the Lichtenstein Center for the Arts in Pittsfield that she feels that cultural organizations in Berkshire County "have an unbelievable opportunity" because of the influx of federal coronavirus aid money to the region.

PITTSFIELD — Members of Pittsfield’s cultural institutions told city officials that, for the past two years, they have been focused on funneling any tourism revenue they have received during the coronavirus pandemic back into basic operations.

Now that almost $41 million in federal coronavirus relief aid is headed to city coffers as part of the American Rescue Plan Act, those institutions want a portion of the money to help them meet sustainability goals, expand incentives to increase local hiring and launch a marketing campaign to bring back tourists to the city.

How did Pittsfield end up with almost $41 million in ARPA funds?

Pittsfield is scheduled to receive $40,602,799 — that's the amount, down to the dollar — over the next two years as a result of the American Rescue Plan Act.

That amount is the product of several funding formulas the Treasury Department is using to distribute the more than $350 billion the act set aside for states, counties, cities and tribal governments.

The Pittsfield population in 2019 was 42,142. That would mean it was a nonentitlement unit like all Berkshire County towns, but the Treasury Department has made an exception to that rule and awarded metropolitan status to cities considered "central cities" for their area.

Pittsfield is one of 38 metro cities in Massachusetts. The state has 313 nonentitlement communities.

The Treasury Department decided to award money to nonentitlement units on a per capita basis. Each city and town was given an amount based on its 2019 population number, multiplied by $104.67.

For metropolitan cities, the Treasury adapted a formula created by the Department of Housing and Urban Development, which grants money to cities to support urban development each year. That formula essentially quantifies community need — looking at the population, the extent of poverty, housing overcrowding, age of housing stock and the rate at which the city's population is growing or declining.

Using all those factors, Pittsfield was given about $769.24 per capita as part of its city allocation of ARPA money.

ARPA also created a county allocation for states to distribute directly to county governments. The state only has five counties with functional governments, so it redistributed the county money at a rate of $194 per capita to cities and towns within areas without county-level governments.

To round that all up, Pittsfield will receive a little more than $963 per person from municipal and county ARPA allocations,  bringing the total dollar amount from this program to $40,602,799.

“I think right now, particularly cultural institutions big and small in Berkshire County have an unbelievable opportunity,” state Rep. Tricia Farley-Bouvier, D-Pittsfield, said during a community forum Wednesday morning at the Lichtenstein Center for the Arts.

Representatives from the city’s cultural organizations said that the money could help get them “back on track” to their pre-pandemic goals.

Nick Paleologos, executive director of the Berkshire Theatre Group, said that before the pandemic, the organization was working on making its heating, electricity and air conditioning more sustainable. The group, which owns the Colonial Theatre, Unicorn Theatre and the Fitzpatrick Main Stage, had to throw “all of that out the window” when COVID began spreading.

“We haven’t been able to get back on track to ultimately what will be one of the key elements of our long-term sustainability as a tourist attraction in Pittsfield and economic driver,” he added.

Community members said they also would like the federal money to help cultural organizations change their hiring and workplace practices so they are more welcoming to people from the local community.

Thasia Giles, community outreach director for Jacob’s Pillow, said that her organization and other nonprofits across the county are trying to understand how systemic racism exists within their work and workplaces. Giles said that to make that work meaningful “requires additional support.”

“Staffing, hiring consultants, training that’s not just a training and a checkmark is an ongoing practice that needs to be supported and funded on every level,” Giles said.

Part of the culture change some community members are striving for comes down to hiring.

Alex Reczkowski, director of the Berkshire Athenaeum, said he would like ARPA money to support paid internship programs and job incentives to help hire people from the Pittsfield community.

“I look at some of the cultural organizations represented here, and jobs and internships can be really transformative for a career in the arts,” Reczkowski said. “But, I don’t see us making space for our local community to be a part of those [opportunities].

“I’d love to see local people thriving from that, just as well as the people applying from around the country,” he said.

Over the past two weeks of community conversations, the city has accumulated a long laundry list of potential projects — from child care supports to increased affordable housing to workforce development and mental health support for frontline workers.

City officials say they will begin funding discussions in the next several weeks, after they have had time to process the community feedback from the forums and the more than 900 responses they have received on their community survey.

Mayor Linda Tyer said that once that is done, she will form an advisory committee of seven to nine community members to help her narrow even further the city’s focus for the federal money.

Community Development Director Deanna Ruffer said that the city has yet to spend any of the $16.2 million received as part of the first federal disbursement of money. She added that a clearer picture of how things stand for the city financially will come Tuesday, when Pittsfield will file a report with the Treasury Department over the status of the city’s money and how the city’s revenue was impacted during the pandemic.

Tyer and Ruffer said that, in the meantime, residents should continue to send ideas and feedback on potential uses for the money, at the city’s dedicated ARPA email address: arpa@cityofpittsfield.org.

Federal housing help was offered, but Pittsfield agency says it had to pass

The Pittsfield Housing Authority was offered 15 emergency housing vouchers last May, but declined to accept them because of limited staff and resources.