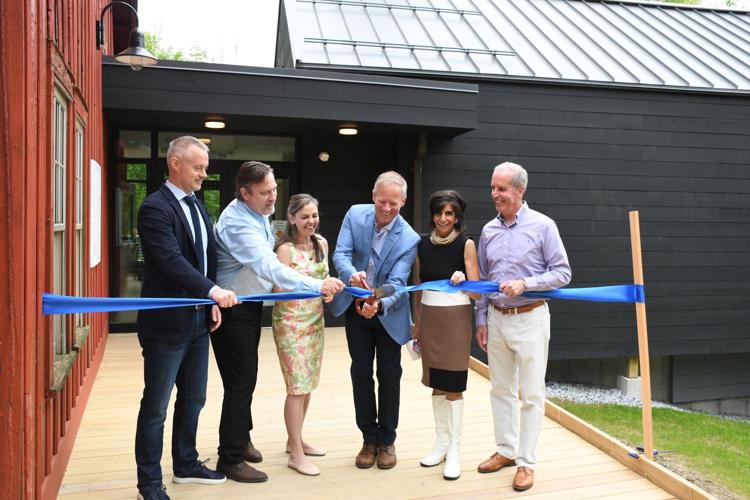 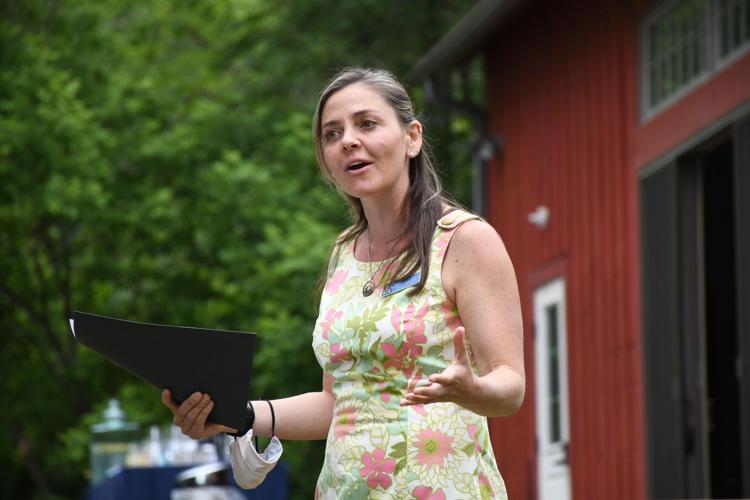 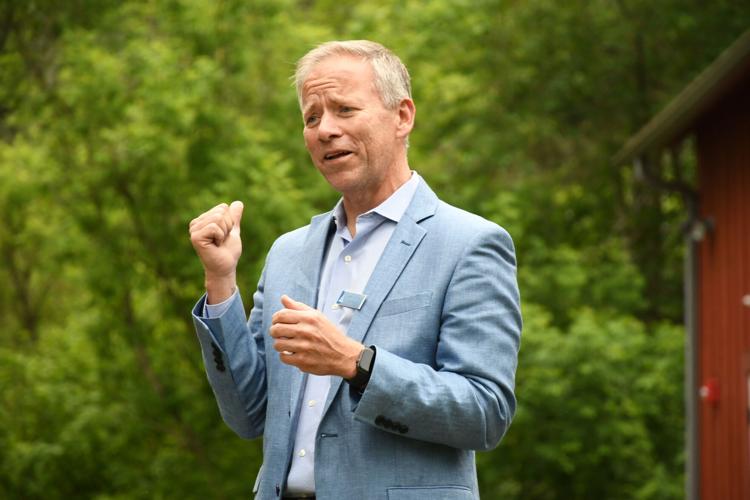 David O’Neill, president of Mass Audubon, said a key part of the organization’s five-year Action Agenda is protecting and conserving 30 percent of the state’s open land in five years by doubling the pace of land-preservation efforts.

Mass Audubon West Director Becky Cushing Gop addresses the audience during Friday’s ceremony celebrating the completion of the renovation and expansion of the Program Barn at Pleasant Valley Wildlife Sanctuary. A five-year action plan laid out during the event emphasized action to confront climate change, conserving more land to support vulnerable wildlife, and enabling many more people of diverse backgrounds and experiences to connect with nature.

The plan, he said, emphasized action to confront climate change, conserving more land to support vulnerable wildlife, and enabling many more people of diverse backgrounds and experiences to connect with nature. A key goal is protecting and conserving 30 percent of the state’s open land in five years by doubling the pace of land-preservation efforts.

“You see the change in climate here in the Berkshires and you understand how important this resilient landscape is to a shifting climate,” O’Neill said. Mass Audubon’s expanding membership, now topping 135,000 statewide, is primed to advocate for policies by organizing politically to push for change at the local, state and national levels, he added.

The completion of the $1.1 million barn project to enhance indoor programming, along with new restroom facilities, a handicapped-access ramp and a new roof, is “a historic moment” at the 92-year-old sanctuary, said Mass Audubon West Director Becky Cushing Gop, who manages Pleasant Valley, Canoe Meadows in Pittsfield and other sanctuaries in Western Massachusetts. The project was designed by J Harwood Architect, based in Lenox.

“Our work to provide equitable, inclusive access to nature for all, it’s right here in front of us,” she told the gathering of supporters and political leaders in front of the barn.

“This building is all about providing access for everyone to nature,” O’Neill stressed. An Action Agenda goal is to create three new urban sanctuaries and 20 urban green spaces “to bring nature to communities that lack it,” he told the crowd. “We’re trying to create more opportunity for low-income communities and communities of color to participate.”

During the coronavirus pandemic, cooped-up residents helped more than double the number of visitors to Mass Audubon sanctuaries, O’Neill said.

“People wanted and needed to get to nature,” he said. In April, the organization recorded the largest number of new members in its 125-year history.

“Buildings and additions like this will help us protect nature for now and for future generations,” O’Neill said.

“We in the Berkshires are going to be critical in these statewide goals, taking the work we do to the next level,” Cushing Gop said.

She cited state Rep. William “Smitty” Pignatelli, who attended the event, as a champion and supporter of the project, as well as Matthew Keator and Allyce Najimy, trustees and members of the Mass Cultural Council’s governing leadership who advocate for the Berkshires.

“We’re pounding the tables and raising our hands,” Keator said.

“We actually received two rounds of funding from MCC, one for $200,000 and a second for $100,000; both are to support the Opening Doors to Nature campaign and, specifically, the barn addition to make it an accessible and welcoming program and visitor space,” Cushing Gop told The Eagle.

“The first round of funding supported the building of the addition itself and the second round supports interior visitor elements like interactive educational displays and lighting.”

“Pounding on the table sometimes is what it takes, dealing with the Boston folks,” Pignatelli said. “Coming up to the ‘Bird Sanctuary,’ as we called it when we were kids, was always special as a family trip or school trip. … We need to value what we have here and protect what is so special to the Berkshires.”

In an Eagle interview, O’Neill acknowledged that Mass Audubon “took a painful hit, early” from the pandemic, losing $5 million in program revenue and letting go the people who run the programs.

But, as the year progressed, he said, donor generosity came through.

“People cared so much about the mission and the organization, and we were very fortunate to get some large, significant grants that helped us not take any more cuts and go into this year with a fairly healthy balance sheet, much better than we expected,” O’Neill said, noting that the organization is hiring 67 staffers to restore operations, as membership has expanded by 22 percent. “We actually will run a surplus this year.”

LENOX — A major upgrade for facilities at Mass Audubon's Pleasant Valley Wildlife Sanctuary is on a faster track after approval of a $300,000 grant by the town's Community Preservation …

Mass Audubon President David O’Neill, named to the post a year ago, offered some additional thoughts in an Eagle interview:

On the Action Agenda strategic plan:

“It was tied to, when we get to post-COVID time, we’ll have a plan that’s hopeful, ambitious, energetic for the public to rally around. We want to continue to capture the interest in nature, seeing how important it was to society during the pandemic, to continue to engage people who were experiencing nature, perhaps for the first time, or re-experiencing it so they could become part of this grassroots movement to protect nature in Massachusetts.”

On how the plan impacts the Berkshire Sanctuaries:

“For the first time in its 125-year history, Mass Audubon has set statewide conservation goals, so all parts of the organization will be working collectively to accomplish something bigger than any one part of it. So, there’s this unifying force, drawing from the best resources across the state.”

On how the commitment to diversity, equity and inclusion plays out locally:

“Our Canoe Meadows Sanctuary in Pittsfield is underutilized, so, how can we repurpose it to reach more people in a low-income community, as well as for people from different backgrounds into our program? And we’re thinking about how Canoe Meadows and Pleasant Valley can work together to provide more people with opportunities to connect with nature.”

On the decision to mobilize and advocate for action on climate change:

“It wasn’t getting the time, energy and resources it would need for Mass Audubon to make a contribution. Our focus is using nature to help us adapt to climate change, to continue to protect land, forests, ecosystems, soils and also, as we warm, the opportunities for land to change so wildlife can survive.

"In the Berkshires, we have an unbelievably important place for us to commit to protecting nature with a goal of net-zero carbon emissions for the commonwealth by 2050. We’re going to start to become more active on policy and mobilize our 135,000 members to become an incredibly powerful voice for the policies that help address climate change.”

On how to evaluate the success of the Action Strategy:

“We’ve set our targets each year and measuring our progress against the goals, being accountable to our board of directors and partners. If we’re way behind or ahead on certain things, we can adapt what we need to do to catch up or expand our thinking.

"And we’ll have to raise more capital for a more robust operating budget. We’re raising the first $12 million toward a $50 million price tag to help implement the Action Agenda, and we’re close to $7 million over three months for land protection and capital improvements that we need on properties like Canoe Meadows and Pleasant Valley.”