PITTSFIELD — A state audit has found $777,844 of “improper spending” by Berkshire County Arc during two years ending in June 2019, some at the direction of managers at the nonprofit for the intellectually and developmentally disabled.

But, the chair of the nonprofit’s board pushed back on the findings, saying that state Auditor Suzanne Bump’s office “grossly mischaracterizes” the agency.

Berkshire County Arc, founded more than six decades ago, received $41.5 million from the state’s Department of Developmental Services and $7.8 million from the Massachusetts Rehabilitation Commission over fiscal years 2018 and 2019, according to Bump’s office. 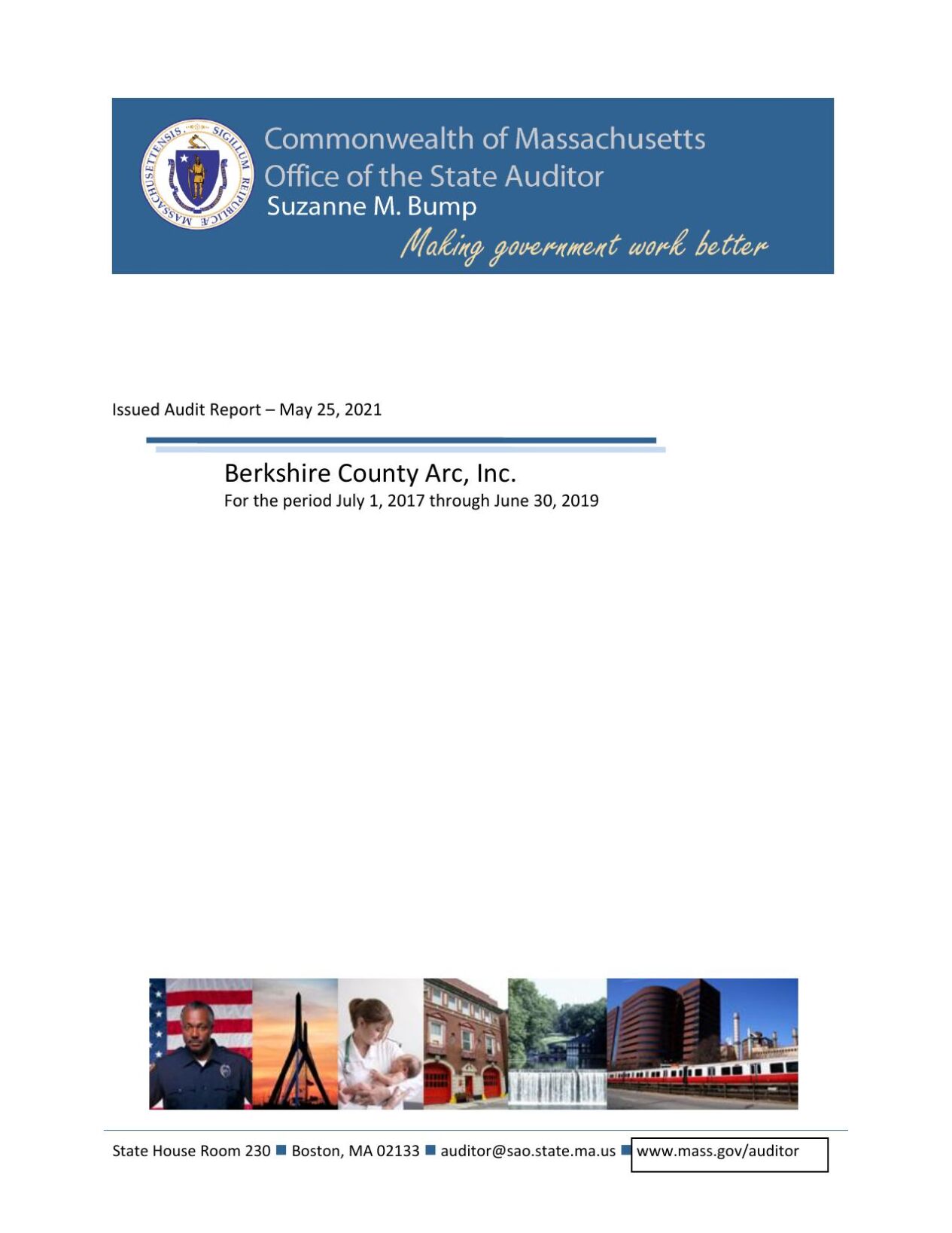 The findings reflect the results of an audit of agency finances from July 1, 2017, to June 30, 2019, and were released Tuesday.

In a statement, Bump’s office said the audit turned up evidence of BCArc’s inappropriate and “questionable use of state funding,” sometimes “at the direction of those in management positions at the organization.”

“The questionable practices and the amounts involved in this apparent misuse of state funding is made worse by the fact that these dollars should have been supporting the agency’s disabled clients,” Bump said in a statement announcing the results. “Our audit makes clear that those in leadership fell short of meeting their oversight and fiduciary responsibilities. Decisive action is needed to remedy this situation and build trust in this critical Berkshires institution upon which so many families and individuals rely.”

But, board Chair Michael Ferry forcefully disputed the audit’s findings and defended President and CEO Kenneth Singer. In a statement, he said the agency has complied with Bump’s office “swiftly and fully” for the past two yearswhile delivering services and helping those it serves navigate the COVID-19 epidemic.

As one of the largest social services agencies in Berkshire County, BCArc operates day programs, dozens of group homes, and provides employment programs and other supports for people with developmental disabilities, brain injuries and autism. It co-sponsors an annual walk to raise awareness money to assist those with Down syndrome.

The audit made four findings:

• BCArc did not have the required documentation for $43,192 in credit card purchases from client funds. According to the audit, these client funds contain money that belong to BCArc’s clients, from sources like Social Security disability insurance and family members.

• The agency “allowed inappropriate use” of credit cards — 48 associated with the agency were in use during the audit period — on expenses that were not allowed under state regulations.

• BCArc charged $124,247 from its state contracts on nonreimbursable expenses, which auditors determined were not permitted because they either were documented inadequately, not related to the agency’s programming or “specifically prohibited by state.”

That included $30,072 in conference and training expenses, $33,660 in goods and services expenses and $12,497 in meal expenses that all were not documented properly. Bump’s office added that BCArc spent $17,643 of its state money on fundraising, $12,014 on “general expenses” that were not associated with client programming — branded single-use coffee pods and a parking fee for an employee among them — $7,064 on parties also unrelated to programming and $723 on “luxury items,” which included valet parking, priority boarding, extra seating on airlines and alcohol.

BCArc said in the document that it purchased the cabin seating for a person with disabilities to attend a conference, but auditors say records show it was purchased “by and for BCArc’s chief operating officer (COO), with no indication that it would be used by one of BCArc’s clients.”

Bump’s office recommended that BCArc work with state agencies to figure out how much of the $124,247 to reimburse the state.

Singer used travel benefits earned on agency credit card miles for personal trips to Hawaii and Mexico. He and BCArc were identified as the cardholders on two different accounts, while other cards Singer was authorized to issue to other agency employees for nonprofit expenses also were “linked” to Singer’s account, the audit says.

“Consequently, all miles earned on these cards accrued to the account in the president and CEO’s name; most of the miles, however, were earned by BCArc charging expenses to the cards,” the audit said.

BCArc said Singer was “required to guarantee the credit cards used by BCArc, making the CEO personally liable for the payments,” which it called a “normal requirement.”

Singer offered to “make a voluntary contribution” back to the agency in lieu of the miles, according to a response included in the audit. The agency since has implemented a policy prohibiting employees from receiving a personal benefit from an agency credit card.

Auditors also focused on a $34,061 professional services contract that BCArc had with a consulting firm whose president is Singer’s wife, Christine.

Described in the audit as a “contracted employee” and “related party” to BCArc, the audit said Christine Singer “either used or benefited from 14 BCArc credit card purchases, totaling $2,057,” including “seven purchases we found that the consultant made to pay for her personal expenses associated with participating in BCArc-related activities with her spouse, only two of which (totaling $392) were reimbursed to BCArc.”

In its response, BCArc said she was contracted to organize a conference with the approval of the board of directors. It disputed the audit’s finding, saying she did not use any of the agency’s credit cards, and all items purchased for the conference were approved by the agency’s chief operating officer, though the audit said those approvals came after the fact.

“At no time did the Consultant use a BCArc credit card to make these purchases — they were made by BCArc staff,” BCArc wrote.

Ferry said that Christine Singer, as a consultant, brought in nearly $500,000 in grants and new revenue for programs, but has not worked for the agency since the audit began.

• Finally, Bump’s office said the agency charged $651,540 against its state contracts for maintenance expenses, bookkeeping services and capital improvements to buildings owned by an affiliate called Berkshire Omega, which owns about 30 properties that BCArc leases from it in the region.

“BCArc could have used this $651,540 to pay for reimbursable expenses for its state-funded programs,” the audit said.

Bump said the spending was not allowable under state regulations because it was not related to programming that benefited the nonprofit’s clients. Berkshire Omega was incorporated in 1980 to benefit the BCArc “solely and exclusively,” and its board members are appointed by the nonprofit’s board, according to the audit.

But, Ferry said the relationship between BCArc and Berkshire Omega is structured to comply with state regulations. He said BCArc provided “bridge financing” to Berkshire Omega “in anticipation of federal housing grant funding,” claiming that the arrangement reduced the amount of state money the agency had to seek, therefore saving the commonwealth money.

“A majority of the funds advanced during the audit period were used by BO to purchase land for new homes in demand by the state,” Ferry said.

Ferry, a parent to a person who receives services through BCArc, denied wrongdoing by the agency. And he said he and the board are “completely confident in the leadership of Berkshire County Arc and its dedicated and passionate staff, led by CEO Ken Singer,” whom he credits for establishing a “long and impactful track record of growth” and client services during his 41-year tenure.

The audit findings came as a surprise, Ferry said, because it had been told the issues largely boiled down to accounting practices. He said the agency spent public money in accordance with its state contracts in order to serve 1,000 clients.

“Board maintains that, in its audit report, the [Office of the State Auditor] grossly mischaracterizes the agency. This is surprising, as during the last exit meeting, BCArc was assured that the issues are related primarily to documentation,” he said in a statement. “As the audit team acknowledged during the exit interview, BCArc’s finances are more than sufficient to pay for any non-reimbursable expenses. BCArc has since modified its procedures to require more rigor and detail on expense documentation as recommended by the OSA.”

BCArc changed its accounting practices to require “more rigor and detail on expense documentation,” as was recommended by Bump’s office, he said.

“We welcome the guidance of the OSA,” he wrote. “The OSA does acknowledge that BCArc implemented new or revised accounting practices as they recommended, and BCArc and its Board of Directors will continue to optimize our practices going forward.”