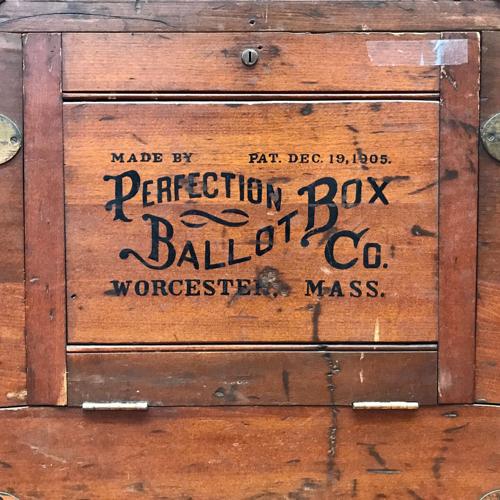 This photo shows an antique ballot box in Pittsfield. Election officials officials in Berkshire County and around the country have recently received a large increase in requests for information about the 2020 election. 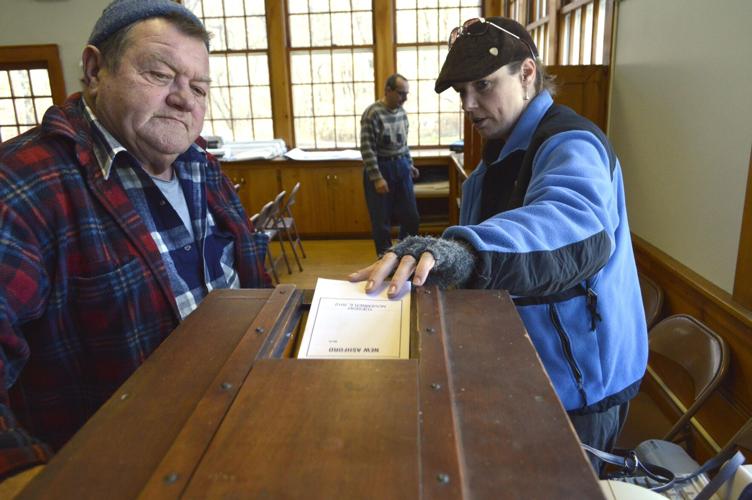 Karen Mongue places her ballot in a ballot box dating from 1873 at the New Ashford Town Hall in 2012. Election officials officials in Berkshire County and around the country have recently received a large increase in requests for information about the 2020 election. 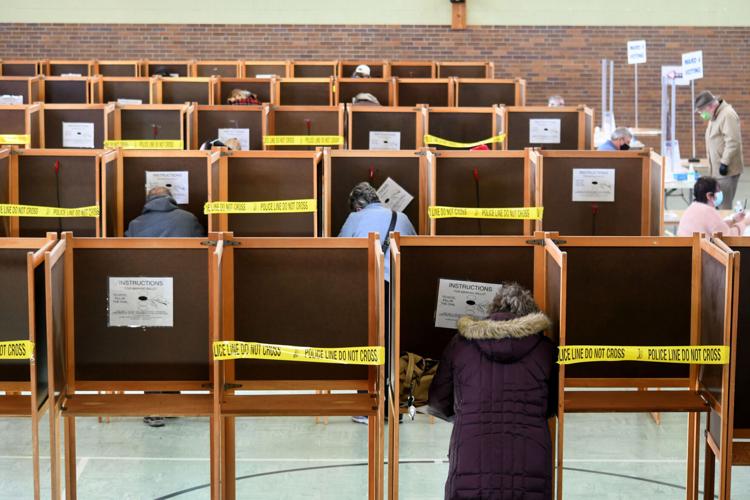 Voters cast their ballots in the North Adams polling station at the St. Elizabeth of Hungary Parish Center on Nov. 3, 2020. Election officials officials in Berkshire County and around the country have recently received a large increase in requests for information about the 2020 election.

This photo shows an antique ballot box in Pittsfield. Election officials officials in Berkshire County and around the country have recently received a large increase in requests for information about the 2020 election.

Karen Mongue places her ballot in a ballot box dating from 1873 at the New Ashford Town Hall in 2012. Election officials officials in Berkshire County and around the country have recently received a large increase in requests for information about the 2020 election.

Voters cast their ballots in the North Adams polling station at the St. Elizabeth of Hungary Parish Center on Nov. 3, 2020. Election officials officials in Berkshire County and around the country have recently received a large increase in requests for information about the 2020 election.

LENOX — Recent emails in Town Clerk Kerry Sullivan’s inbox have made her feel like screaming.

As Sullivan prepares for the elections in November, she has gotten an influx of public record requests about the November 2020 election. She’s gotten emails asking for voters’ ID numbers and serial numbers of election equipment from an election that was almost two years ago. “This is our busiest time. ... I don’t have an assistant,” Sullivan said.

Sullivan is not alone in her frustration. Around the country and state, election officials have recently received a large increase in requests for information about the 2020 election, fueled by conservative activists who dispute the presidential election results. Clerks in the Berkshires are getting the requests too, which are taking up resources as they prepare for another election in November and leaving some frustrated.

“I don’t know how many different ways they want this information. It’s the same numbers, they aren’t going to change,” said Sullivan, clerk for the town of Lenox. “What are you trying to accomplish by creating all this extra work for people? We’re not hiding anything.”

Recently, she got a request asking for detailed information about every ballot cast in the November 2020 election with a list of instructions about how to create the report if it didn’t exist. It specifies a preference for a .JSON file, a type of file Sullivan said she had never heard of.

“I had an anxiety attack reading it,” Sullivan said of the email. She responded to the request saying she would send what she could. 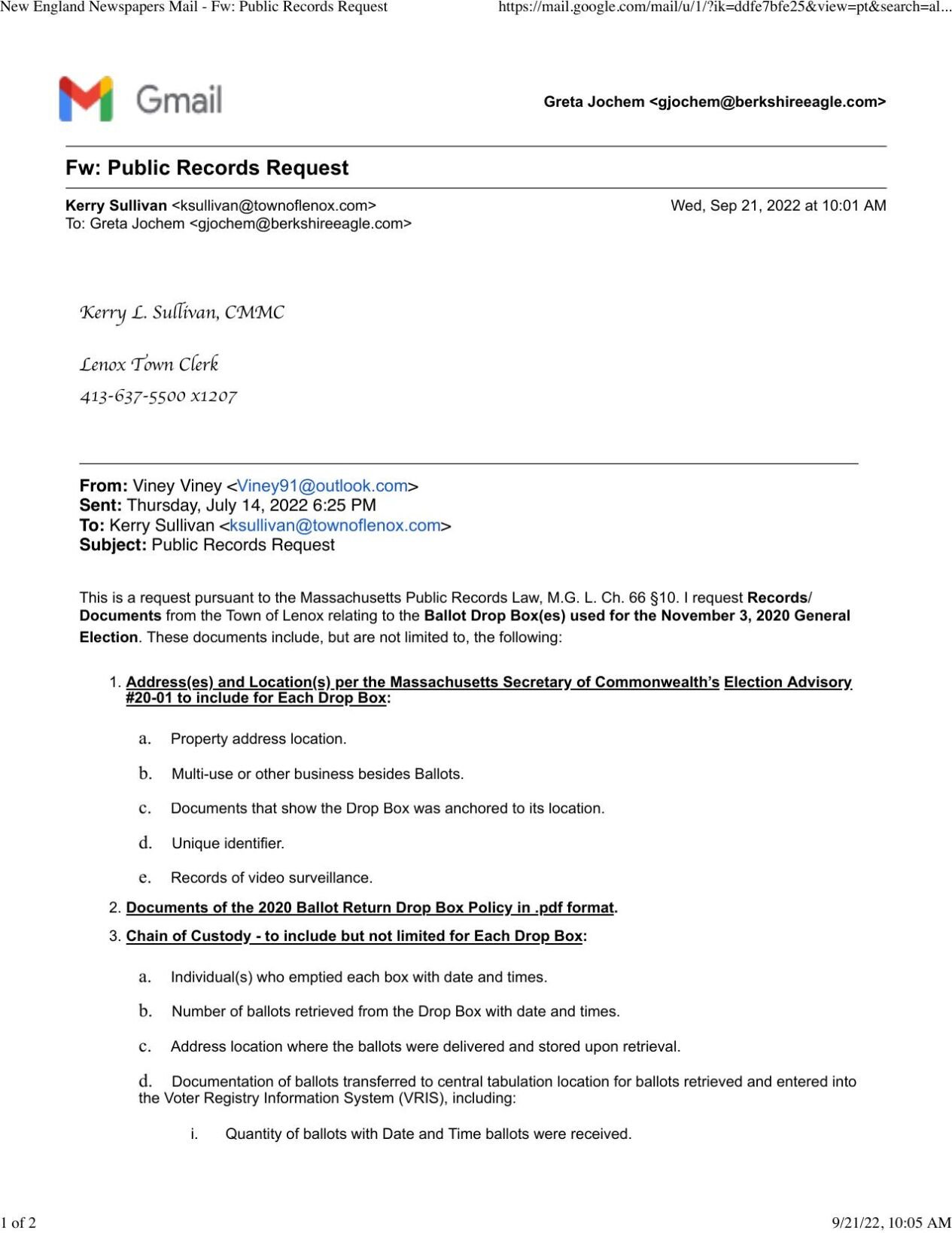 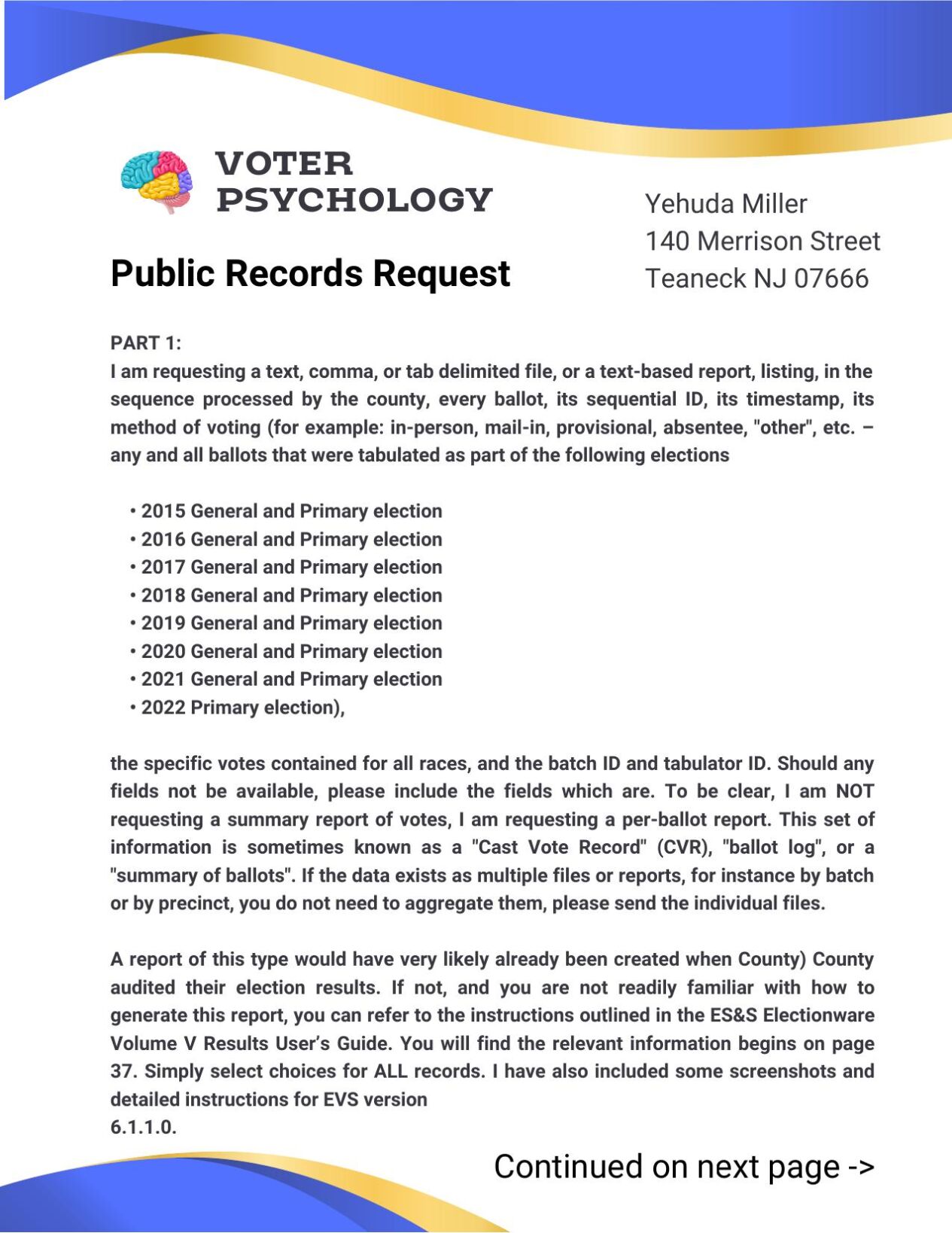 The email’s author did not immediately respond to a request for comment.

“Not to sound dramatic,” Sullivan said, “but you’re sitting here and you want to scream.”

The 2020 election was nearly two years ago, and Messina said it seems like there have been a million more since then. Two high-profile primaries — for Berkshire County district attorney and sheriff — just wrapped up on Sept. 6, and another election is coming Nov. 8.

“We’ve got big things on our plate right now,” Messina said. “We don’t have time for this. It feels like they are threats.”

Documents related to federal elections must be kept for 22 months, according to federal law. The Massachusetts Secretary of the Commonwealth also has a specific record retention schedule that allows for the destruction of some election documents after 22 months. Clerks pointed to that recent deadline as a reason behind an uptick in requests.

“I think it was a last-minute scramble before the retention period expired,” said Williamstown Town Clerk Nicole Beverly.

In the last month, Williamstown has gotten five requests about the November 2020 election. Some demand that the town hold on to records past the required date, Beverly said. A lot ask for information she does not have. “They are looking for very specific reports that, unless we have a certain type of software, we don’t have the capacity to produce those reports.”

Records access officers are not required to create records of they don’t already exist, she said, pointing to the state public record law.

It’s not unusual for Beverly to receive records requests about elections, like inquiries about how many people voted by mail-in ballots. “But not these shot in the dark ... broad, vague requests,” she said.

Some messages have told clerks to keep records from the 2020 elections. One requester emailed Messina a copy of a letter saying she was contemplating a lawsuit “pertaining to the continuing concerns I have regarding the integrity of all elections that took place after December 31, 2019.” The message instructs clerks not to get rid of any election-related materials. 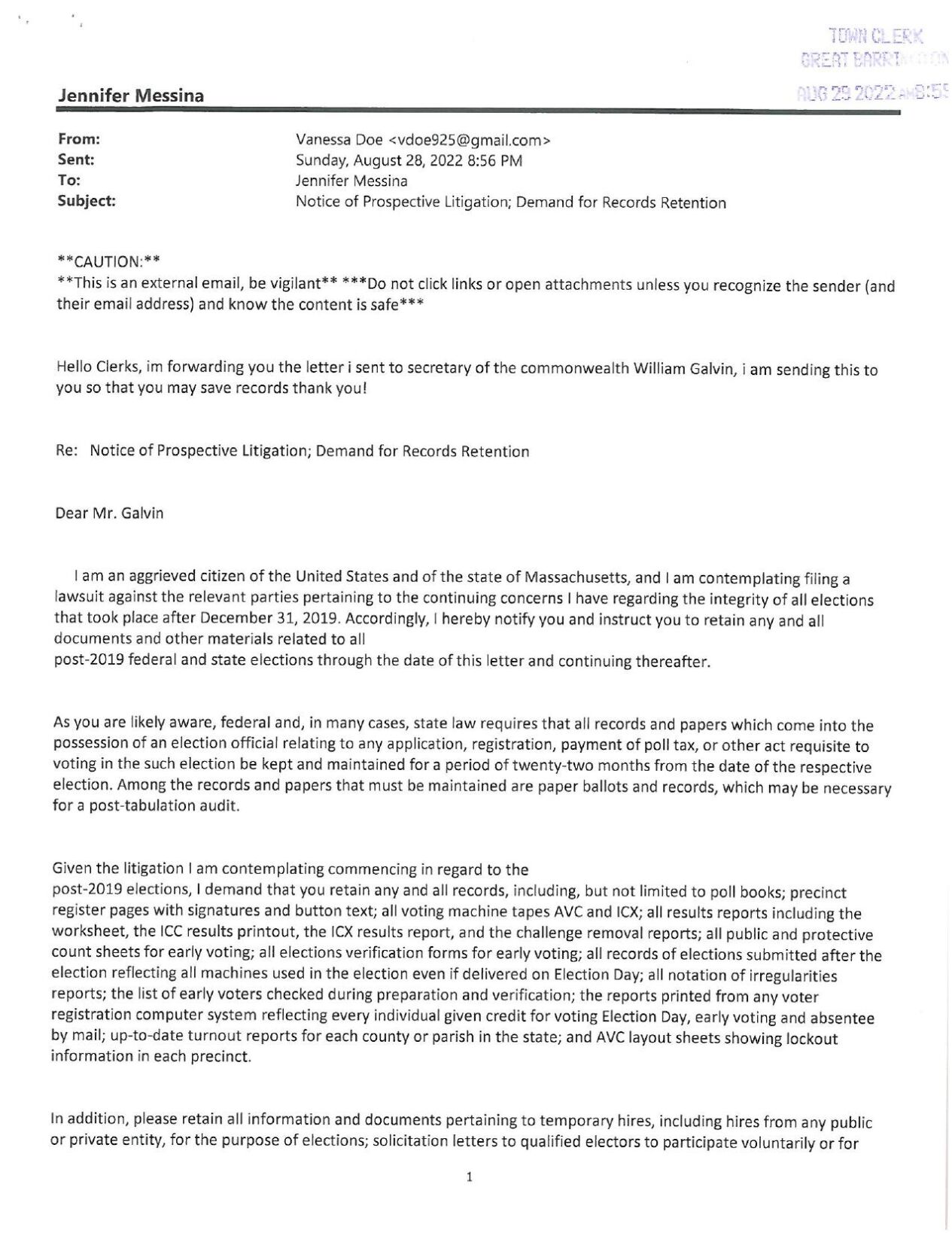 “They are basically saying they might take us to court,” Messina said. “They are telling us we should not throw it away.” Messina sent those emails to the town counsel for a legal review.

For now, that’s what Secretary of the Commonwealth William Galvin’s office has recommended, said Debra O’Malley, a spokesperson for the office.

Ballots take up a lot of space, and the 22-month retention period allows clerks to make room for ballots from new elections, O’Malley said.

“You’re shredding old ballots you don’t need anymore, old envelopes,” she said. “Elections have been run. People have been sworn into offices. At this point, we don’t need to retain these records for a recount. Many of these terms are almost over.”

Starting this summer, the Secretary of the Commonwealth’s Office, which administers elections, has seen an increase in requests about the 2020 election, O’Malley said. It’s also fielding questions from clerks around the state who are getting requests, some for records Massachusetts does not keep, like election results by type of ballot, and for information at a county level, which is not how elections are run in the state, O’Malley said. Requests seem to be posted online from several “election deniers and conspiracy theorists,” she said.

“Whether they are seeking to disrupt the current election or make life difficult for election officials, we don’t know, but certainly it has been a big burden especially for our small towns,” she said.

Still, under the state public records law, clerks still have to respond to the requests, O’Malley said, “even if they are onerous and annoying.”

A lot of the recent requests are time-consuming, Berkshire clerks said. Pittsfield has received requests for 2020 election information including ballots cast with the person’s name, address, ward and method of voting, according to Pittsfield City Clerk Michele Benjamin.

“Some of this information will take hours to gather and (was) requested during the weeks prior to the State Primary Election,” Benjamin wrote in an email. “Much to distract from our current duties of running an honest and fair election for all candidates on the primary ballot.”

North Adams City Clerk Joshua Vallieres is frustrated about the recent uptick in requests. He got a number of emails at the end of August. Many of them contain the same text, he said.

Soon, he will have some backup — a new assistant city clerk is set to start in early October.

But for now, Vallieres said he’s getting “bombarded.”

“I’m only one person in the office right now. It’s a lot to consider when I have 50,000 other things going on at once.”

Our Opinion: In a clerk's office near you, democracy is still under attack

It underscores why our democracy, which relies both upon the rule of law and a system of norms, is so structurally vulnerable to polarization.