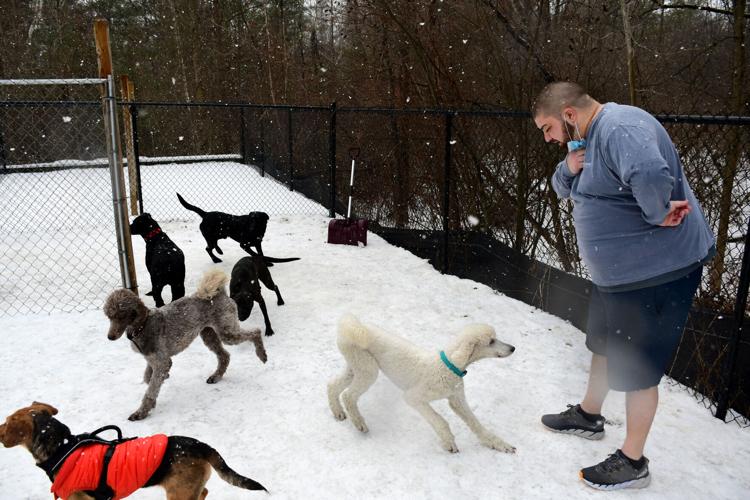 Berkshire Dogs Unleashed owner Lee Kohlenberger Jr. stands in the outdoor fenced-in area of his business off Pittsfield Road in Lenox. Facing complaints from neighboring businesses, Kohlenberger is asking the Zoning Board of Appeals to clarify the conditions of his special permit. 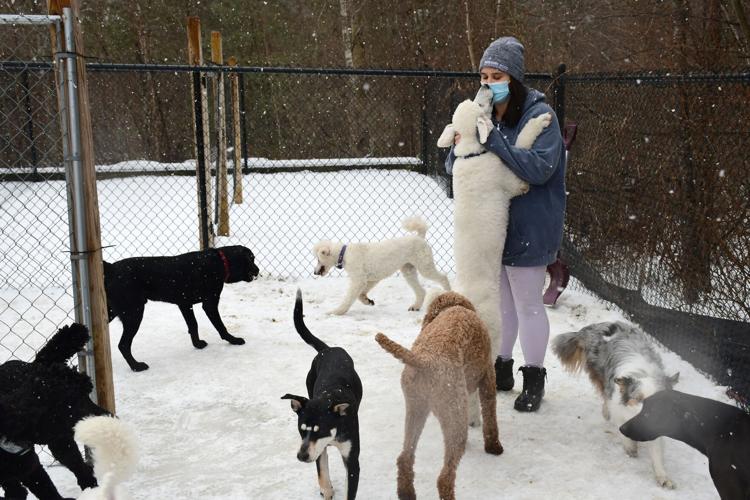 Berkshire Dogs Unleashed manager Nicole VanBramer plays with some dogs in the outdoor fenced-in area. The special permit decision for the business limits dogs in the day care section to 10, and an overall daily maximum of 50 per day at the site. 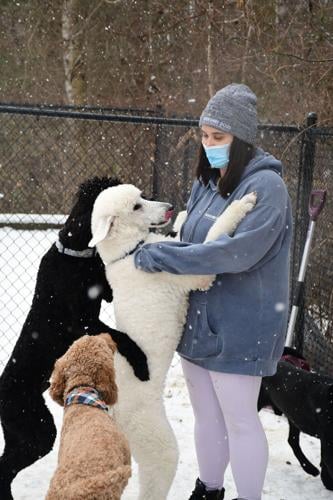 VanBramer plays with dogs in the outdoor fenced-in area. The town's zoning board approval requires dogs to be supervised in the fenced-in outdoor area at all times. 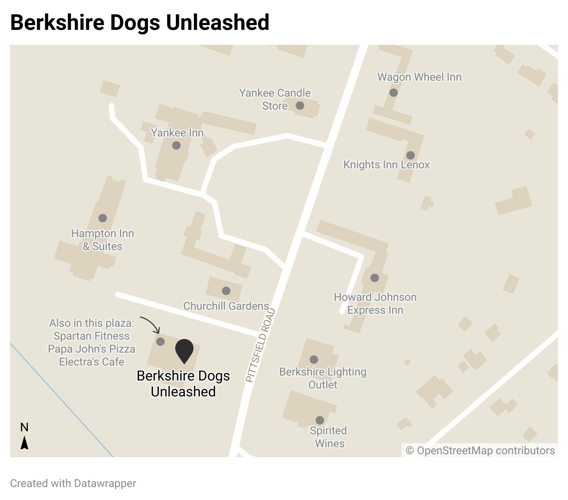 LENOX — Facing a host of noise complaints, the owner of a dog boarding business is seeking guidance from the town on his responsibilities toward his neighbors.

Lee Kohlenberger Jr., owner of Berkshire Dogs Unleashed, said last week that he believed he was operating according to the guidelines of the special permit and site plan approval the town granted him in 2020.

“There seems to be confusion about what I’m allowed to do, and I’m just looking for some guidance,” he told the Zoning Board of Appeals on Feb. 2. “I want to make sure I’m doing what’s right for the business and for the community.”

The town has received complaints from several neighboring businesses upset about excessive noise and multiple groups of dogs outside the 439 Pittsfield Road canine day care and kennel, which opened in October 2020.

During a spirited discussion at last week’s ZBA meeting, Luke Toole, manager at the nearby family-owned Yankee Inn and Hampton Inn, stressed that he initially had welcomed the arrival of the boarding business in 2020 as a service to guests who want to bring their pets on vacation.

“I was totally positive on it,” Toole said, noting that most area hotels don’t allow dogs in the guest rooms.

“However, during the spring and summer of 2021, we realized what an issue the noise is, especially at the Yankee Inn,” he said. “We were fielding complaints almost daily from Memorial Day to early October with a significant impact on guest experiences. The barking penetrates right into the main building, and we’ve had people say they’re not coming back. It’s definitely become a nuisance.”

The meeting was prompted by a letter from Don Fitzgerald, a building inspector, who reported that there was only one employee at the business during a recent visit.

“That’s a serious charge,” ZBA member Albert Harper told Kohlenberger. “You volunteered to keep the dogs quiet and supervised, and you weren’t doing that. It’s clear that’s part of what you have to do.”

Kohlenberger, who disputed that report, said his business is open to the public from 7 a.m. to 6 p.m. He said a manager begins taking dogs out one or two at a time starting at 5 a.m. to minimize barking, and no dogs are taken out after 10 p.m. for any reason.

The special permit decision limits dogs in the day care section to 10, and an overall daily maximum of 50 per day at the site.

The ZBA approval requires dogs to be supervised in the fenced-in outdoor area at all times. ZBA Chair Robert Fuster Jr. reminded Kohlenberger that he said outdoor play time for the dogs would be in a small group of two, three or four dogs at a time, with a supervisor.

For stressed out Lenox students and staff, on-duty comfort poodles aim to soothe

But, at last week’s meeting, Kohlenberger acknowledged that there are “multiple small groups” at a time in the fenced-in area that contains five pens.

“A 50-dog kennel is going to have noise, and at the time, no one objected to this,” Kohlenberger stressed. “Now, it’s becoming an issue of whether I can stay in Lenox or not, and the last thing I want to do, and can afford to do, is move.”

Saying he had invested $300,000 in the facility, Kohlenberger said he was open to considering noise barriers as long as other issues are resolved by this summer.

Also, he said, 90 percent of his customers are visitors to Lenox, and he is seeking arrangements with area hotels to attract guests to board their dogs at Berkshire Dogs Unleashed.

Kohlenberger said he plans to submit a new written petition for a future meeting. He told The Eagle on Monday that he is working on a plan that would satisfy all sides in an effort to be a good neighbor.

Fuster told Kohlenberger and Toole that it would beneficial if they could work out their differences.

“It’s not a guarantee that a petition would be approved,” he said, “but it definitely goes a long way to dealing with detriment to the neighborhood issues if we have letters from people who say the issues have been worked out, in terms of goodwill in the neighborhood.”

Several ZBA members, including Harper, Kimberly Duval and Shawn Leary Considine, cited the town’s lack of a noise ordinance as problematic, though Fuster said an ordinance is not the issue. Instead, what an applicant states to the board is binding, he said, citing the impact on a neighborhood.

“He [Kohlenberger] can control the noise from the dogs, as he agreed to do so voluntarily when he first presented this application,” Harper said. “I certainly don’t want him to leave Lenox, I think this is a very valuable business for our tourist industry, and it may be that he has to change his business plan a little bit.”