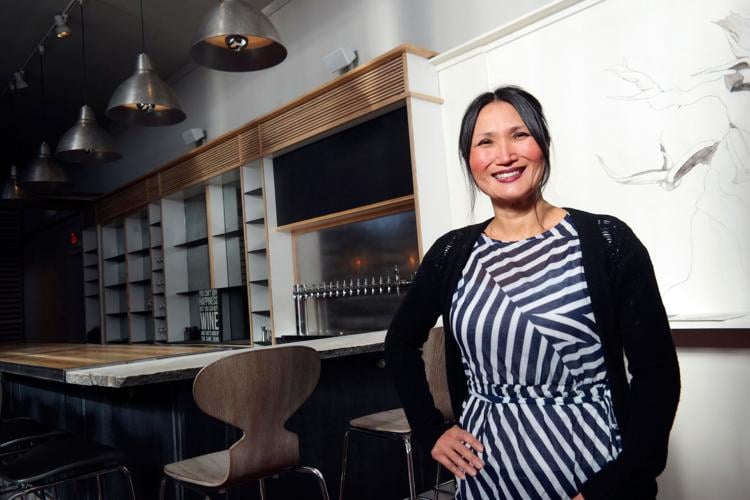 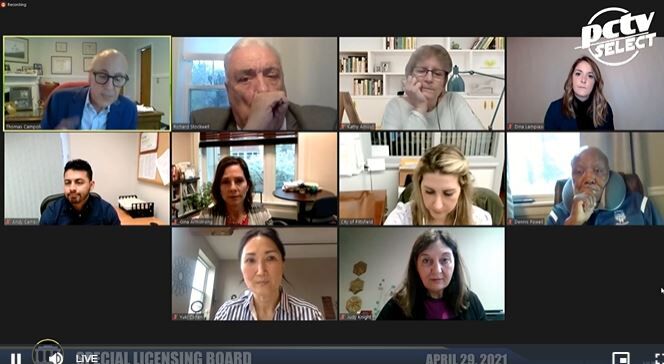 The Licensing Board has suspended City Councilor Yuki Cohen’s liquor license for one month, after determining statewide COVID-19 safety orders were violated at Methuselah Bar & Lounge on April 15. SCREENSHOT BY AMANDA BURKE

The Licensing Board has suspended City Councilor Yuki Cohen’s liquor license for one month, after determining statewide COVID-19 safety orders were violated at Methuselah Bar & Lounge on April 15. SCREENSHOT BY AMANDA BURKE

PITTSFIELD — It wasn’t just the bar-top dancing. Repeated infractions before that incident this month at Methuselah Bar and Lounge will cost it a month of operation, followed by another month of curtailed entertainment.

In issuing a penalty Thursday, the Licensing Board’s chairman noted that while bar owner Yuki Cohen wracked up multiple pandemic-era safety violations, other city establishments closed for good. “The reason why they’ve gone under is that they’ve complied with Covid orders,” Chairman Thomas Campoli told Cohen and the board.

Sounding off as well were other restaurant and bar owners in Pittsfield, while Campoli blasted Cohen for not following rules.

“Now, against this backdrop, we have a licensee on North Street in the center of Pittsfield, with a history of violations — violations before Covid, violations after Covid. That establishment is operated by a Pittsfield city councilor, and that means something to me,” Campoli said. “She didn’t just allow this to happen on April 15. I mean, frankly, she was involved in it, it appeared to me in the videos, every step of the way.”

The board had found violations of COVID-19 orders at Methuselah in the past, resulting in a two-day liquor license suspension in January. Cohen has received seven license violations since the liquor license was issued in 2014, according Campoli.

Cohen apologized to the board, and said her birthday had been approaching on April 15, the night in question. Late that Thursday, she said, she was with about 10 other people who also work in the service industry.

“I started celebrating a little early, let my guard down and I am deeply apologetic, to the community and to the board and in the Health Department,” she said.

The scene was captured in three videos that were later sent to city health officials, including by At-Large Councilor Earl Persip III, who relayed them on behalf of his constituents, according to Health Director Gina Armstrong.

The videos, which were played at the board meeting, showed Cohen unmasked and dancing on a bar at Methuselah with patrons. Unmasked patrons can be seen embracing each other and singing.

The Board of Health received the first video April 16, said Armstrong. The department sent Cohen a violation notice with a 48-hour deadline to submit a “corrective action plan.” When health officials received two more videos the following day, the Board of Health issued a cease-and-desist order.

“When we received the second and third videos, it made it very obvious that this behavior was allowed to continue on for an extended period of time,” Armstrong told the board, saying that put “a great number of people at risk of exposure to Covid-19.”

Cohen volunteered to keep the bar closed until the following Tuesday to ensure compliance with the rules, said Armstrong. She also submitted a new safety plan and reduced hours of operation, closing earlier.

Cohen and her attorney, Judith Knight, admitted that Cohen failed to enforce the mask mandate in effect when patrons aren’t dining or drinking, failed to ensure workers wear face coverings, and failed to keep customers seated at all times and maintain social distancing. They contested the charge from health officials that they failed to serve prepared food to all patrons with drinks, as required by the state.

“I believe that it was in compliance with what is required,” said Knight.

The city’s senior inspector, Andy Cambi, said the food was almonds and olives and didn’t comply with the state’s mandate. Cambi singled out one of the receipts Cohen provided to the city, which Cambi said showed that City Councilor Patrick Kavey had ordered almonds with drinks.

Kavey told the Eagle that he and another person, a Pittsfield police officer, ordered drinks and appetizers from Methuselah about an hour after the establishment opened, around 5 p.m, and left around 7 p.m.

“I was not there for the violation and I think it is extremely inappropriate that the Health Department is trying to bring me into this discussion and possibly target me for something I haven’t done,” said Kavey.

A board member calls for revocation

Attorney Thomas Hamel spoke during a comment period and said he was representing a number of restaurants. They include the Hot Dog Ranch, whose owner Craig Benoit is running for an at-large council seat. Other businesses are Mazzeo’s, Samel’s, Zucchinis, Roasted Garlic, Cim’s Tavern, Berkshire Hills Country Club, Friend’s Grill, the Highland Restaurant, and Jae’s Asian Bistro.

On behalf of the restaurants’ proprietors, Hamel read a statement urging the board to take into account the "harm the licensee's actions have caused them" when deciding on "appropriate sanctions." After Hamel attempted to link the local closure of in-person dining last December to Methuselah and “a super spreader event” he claimed occurred there, Campoli turned the conversation to the most recent violations.

Some of the restaurants are members of an association that formed in the wake of the suspension of in-person dining in Pittsfield, but Hamel said he was not there on behalf of the association.

Hamel said the conduct captured on camera “affects their abilities to conduct business at this point in time, because it is bad business for the city of Pittsfield to be viewed this way. My clients want the board to understand the impact to their businesses.”

Board member Dina Guiel Lampiasi, the city councilor from Ward 6, called out the statement as inappropriate.

“I think that whole presentation was completely inappropriate. It was clearly politically motivated,” she said. “This so-called restaurant association, I think it’s great that they’re there to help each other, however wielding their power politically, I have a problem with that. That’s how these processes begin to look like a circus.”

In an interview, Benoit, the owner of the Hot Dog Ranch, denied there are political motivations behind his participation. He said it was a business decision, because the conduct at Methuselah could have generated another surge similar to the one in the winter that hurt his business and employees. Benoit’s restaurant had a COVID-19 violation in March 2020.

Board member Kathleen Amuso moved to revoke the liquor license, but no one seconded her motion.

“Nobody’s doing this to you except you,” Amuso told Cohen. “This is your responsibility. You were in Methuselah’s, in your bar, doing exactly what you have been told is against the law.”

This story has been modified to correct information about the restaurant owners' statement.