LENOX — It has taken a few swings, misses and unforced errors over the years — but the town finally has hit a home run for affordable housing.

The Zoning Board of Appeals on Wednesday night gave its unanimous approval to a plan for a 13-building, 65-unit mixed-income apartment complex at Brushwood Farm off Pittsfield Road (Route 7/20).

Clearing the way for the deal was an agreement between the developer, Pennrose LLC, and the Toole Lodging Group, owner of the adjacent Courtyard by Marriott hotel, to resolve their concerns over aspects of the development.

The project, first unveiled informally in June, is projected to cost at least $30 million, not including the purchase price, which remains undisclosed pending completion of the real estate transaction in about one year, when construction begins. Pennrose has held a purchase-and-sale option with the Hashim family, which owns the nearly 15-acre parcel at 36 Pittsfield Road. 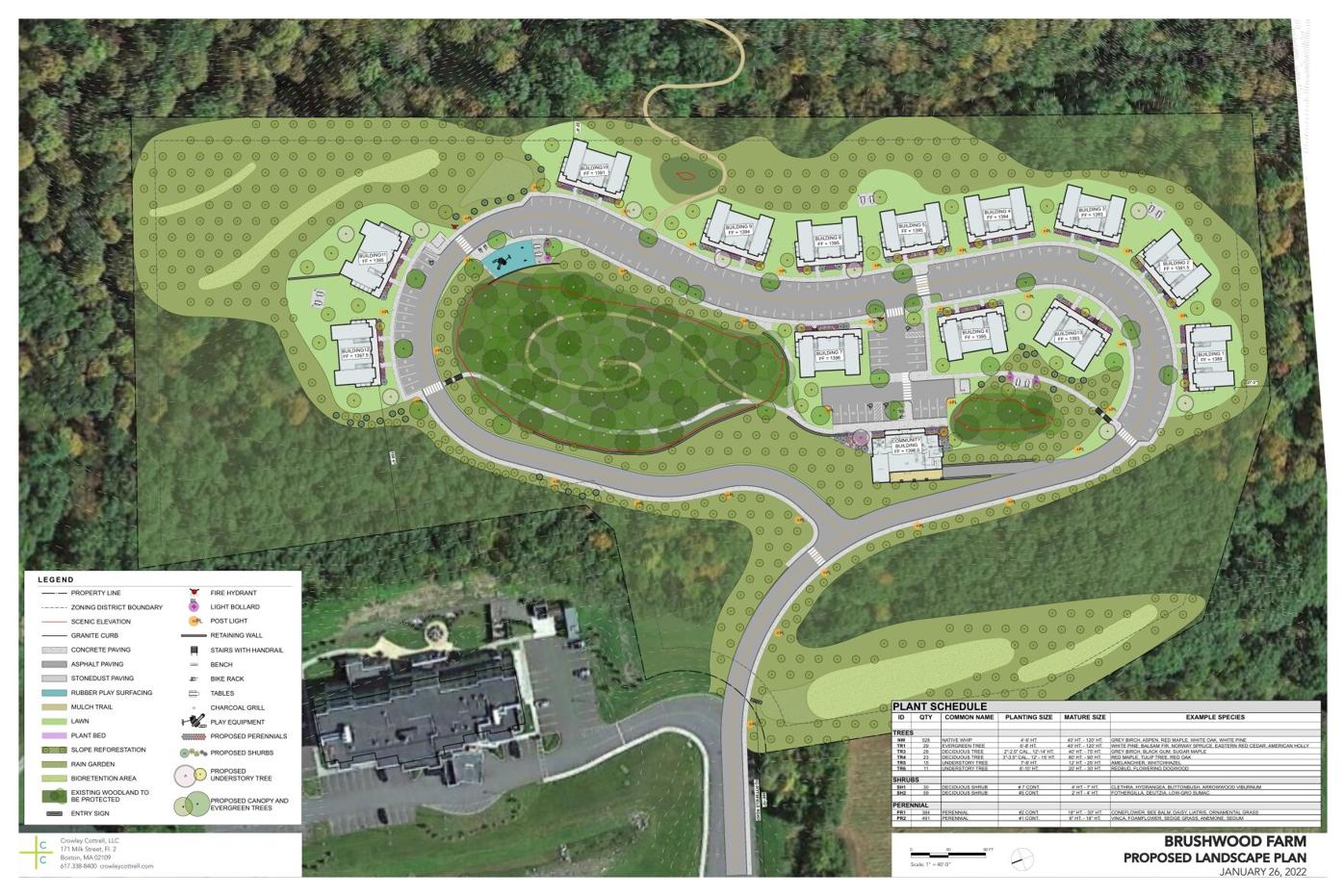 “This is an incredibly important project to the town of Lenox,” said ZBA member Albert Harper. “We have suffered greatly in the past with not having affordable housing, and that has prevented our children from going off to college, coming back and being part of the community they grew up in.”

Along the same lines, ZBA Chairman Robert Fuster Jr. pointed out that “for people who want to work here, raise their children here, send them to school, it’s much harder. I think this is a great project. I’m hoping it brings in a lot of people with children, for our schools and for our community benefit. The more children we have in the town, the more life and activities the town has.”

A Lenox hotel owner has concerns about plans for an affordable housing complex nearby. Now the two are seeking middle ground

The affordable and workforce apartments, Brushwood Farm Housing, would be rented to qualified, income-eligible individuals and families, based on federal and state guidelines pegged to various thresholds of area median income for Berkshire County.

The rental units include 24 one-bedroom apartments, 33 two-bedroom units and eight three-bedroom units, with all 65 affordable and deed-restricted. A community building will include offices for on-site management and resident services.

The agreement between Pennrose and the Toole family, addressing concerns they raised in January, limits exterior construction hours to 8:30 a.m. to 4:30 p.m. Monday through Saturday, with none on Sunday, and blasting would be confined to 11:15 a.m. to 2:30 p.m. Monday through Friday, with none on weekends, in order to minimize impact on hotel guests.

Who is eligible to rent?

Applicants will compete for the apartments through a lottery. During the first year of rentals, an expected 70 percent of the most affordable units — or 35 apartments — will be reserved for current Lenox residents, employees who work in town and families with children in the town’s public schools.

The marketing and leasing of the Brushwood Farm Housing apartments will meet all state and federal fair housing requirements, Pennrose officials said.

Monthly rentals of the one-, two- and three-bedroom units would range from about $800 to $2,500, according to projections by the developer, subject to change based on market conditions when apartments are leased.

The final Zoning Board of Appeals decision will ensure that at least 16 of the 65 affordable or workforce apartments will be affordable to people or families earning up to 80 percent of the area median income, as defined by the U.S. Department of Housing and Urban Development.

For a single person in Lenox, the 80 percent area median income limit for low-income housing is $46,960; for a two-person household, $53,680; for three people, it’s $60,400, and is $67,120 for a four-person household, according to current state calculations for the Berkshire County metro area.

The deal also relocates the apartment building that had been closest to the hotel, moving it to the south side of the Brushwood property. The agreement includes enhanced landscape screening to shield the complex from the hotel.

The rental property cannot be converted to a condominium-form of ownership, according to one of the conditions included within the overall project approval.

Construction, beginning with site preparation, is scheduled to start next spring, at the earliest, with completion 12 to 15 months thereafter, said Charlie Adams, regional vice president for Pennrose’s Boston office.

The minimum six-month renewable leases will prohibit sublets, ensuring that the 65 apartments, ranging from one- to three-bedroom units, cannot be used for short-term, Airbnb-style rentals.

ZBA members generally were effusive in their praise for the plan.

“This is a really smart project, and I’m very, very happy to see it going,” said Kimberly Duval.

But, she added, “It’s a shame that, in this community, we aren’t able to rehabilitate more of the older homes. There are a lot of houses that could be used for market-rate housing, but the costs, between lead, asbestos, plumbing, HVAC, it’s just ridiculous. That means we have dilapidated buildings that continue to languish.”

As ZBA member Jedd Hall pointed out, “The market is so tight and so competitive. Without this type of project, we’re going to not have young professionals, people who work in industry, actually have a place to live. This seems to be exactly where it should be, the right place and definitely the right time.”

He pointed to “skyrocketing home prices,” citing a Lenox Dale neighbor who sold a house for $50,000 over the asking price, “sight unseen.”

Pennrose had been the runner-up applicant to develop a mixed-income housing complex at Sawmill Brook on Housatonic Street, across from Caligari’s Hardware and just off the state highway bypass. The proposal failed to win the necessary two-thirds supermajority at the 2019 annual town meeting, where it fell short by 73 votes amid intense local neighborhood opposition. Under recently approved state legislation, only a simple majority is needed now for such projects.

The Pennrose application now approved is for a Massachusetts Chapter 40B development. The state statute enables local zoning boards of appeals to approve affordable housing developments under flexible rules if at least 25 percent of the units have long-term affordability restrictions.

After giving their green light for the overall project, the ZBA members unanimously approved waivers from town bylaws in order to allow multifamily buildings within the Gateway mixed-use zoning district that includes Brushwood Farm, for subdivision density allowed in a residential district, as well as another waiver allowing five units per building.

Clarence Fanto can be reached at cfanto@yahoo.com and on Twitter @BE_cfanto.

The Berkshires: A quaint snippet of countryside composed of small towns and big forests. People come from all over to stay in our hotels, eat …