PITTSFIELD — Opponents of the Verizon Wireless cell tower in south Pittsfield have taken their case to the state’s highest court, hoping justices will take a second look at the city’s alleged failure to send residents proper notice about the structure.

Attorneys representing Verizon Wireless, the Zoning Board of Appeals and the city, meantime, say two courts were right to conclude that missing mailers aren’t enough to override the tower’s approval years ago.

Since April 2020, neighbors who filed a lawsuit have argued that the first notice they received that Verizon had secured a permit to build a 115-foot cell tower nearby was the sight of construction trucks rolling up their street.

The tower went into use that fall, located at the rear of a large tract at 877 South St. In the months following, some residents of the area said its operation had affected their health, bringing nearly two years of on-and-off debate before the city’s Board of Health and City Council.

Late last month, tower opponents brought suit against Mayor Linda Tyer and other officials in an effort to compel the city to allow the Board of Health to exercise its authority to handle public health matters. 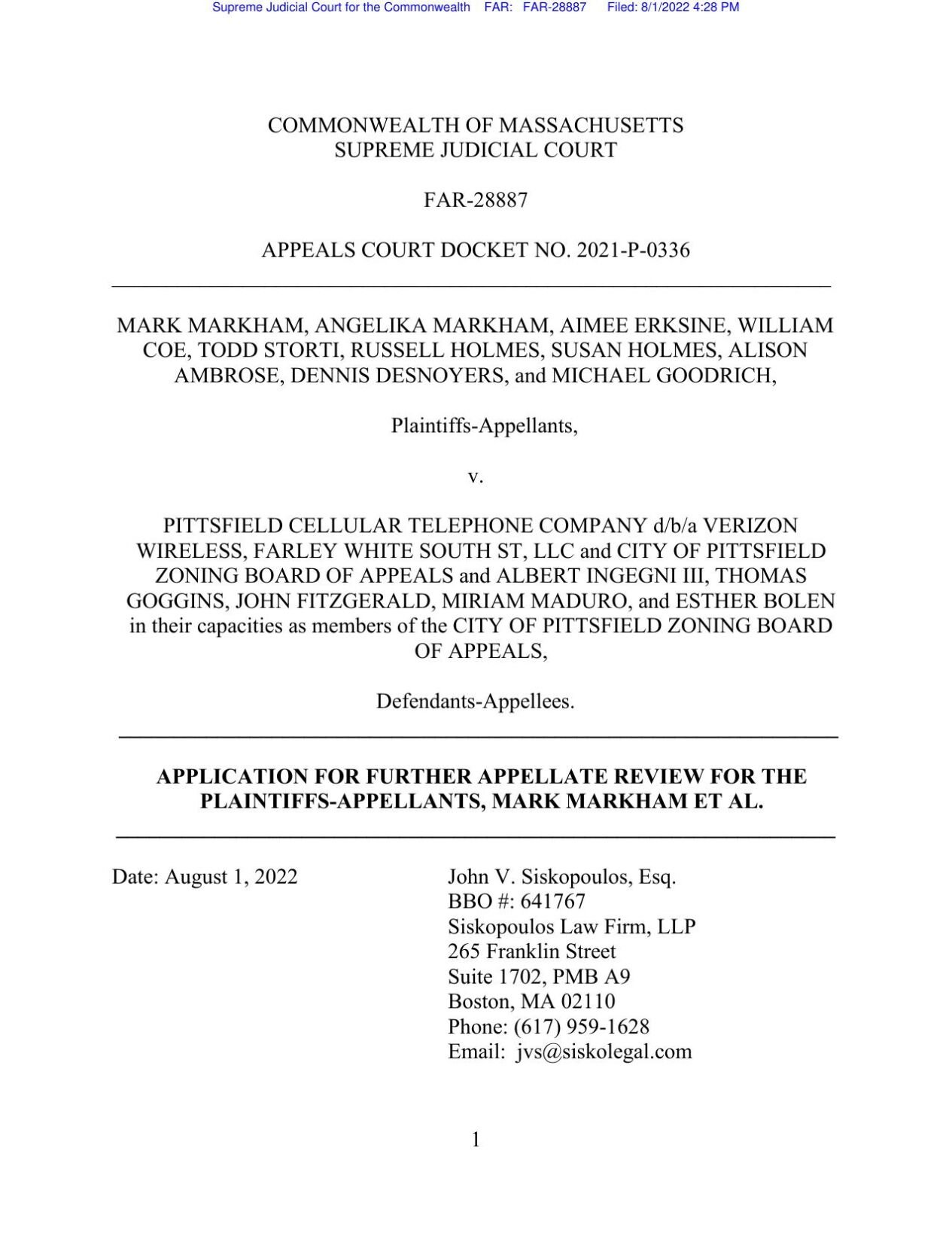 They say the city failed to meet a state law that requires a legal ad in the local newspaper, posted notice in City Hall and a mailed notice to people living within 300 feet of a proposed work site. Those alerts are designed to let people know they can participate in a public meeting. 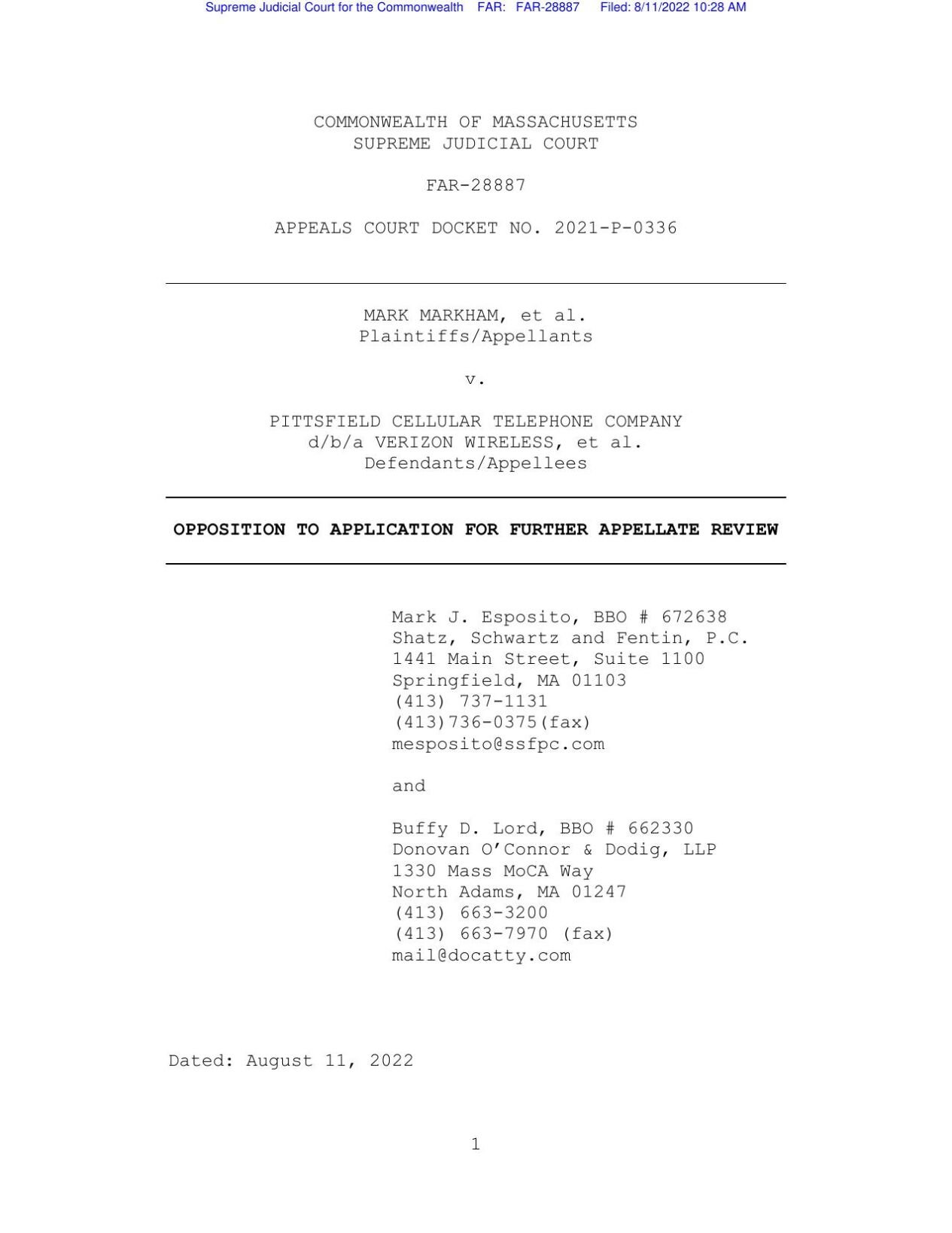 A judge in August 2020, and three appellate court judges in May, found that the city likely did fail to mail notices to the group of abutters, but that the city did meet the other two notice requirements mandated by the state.

Both courts said use of two of the three required forms of notice meant residents were still required to meet a 90-day deadline to appeal of the ZBA’s tower permitting.

To meet that, the abutters’ appeal would have needed to be filed by February 2018.

A new attorney for the neighbors, John Siskopoulos, says he can’t understand how both courts could have concluded the abutters didn’t receive a mailed notice, yet also find that this lack of a mailed notice means nothing to their argument.

In a filing to the Supreme Judicial Court Aug. 1, Siskopoulos wrote that if that designation was allowed to stand, it “will deprive property owners of their constitutional due process right to notice and the right to appellate review.”

“I’m not trying to make jokes, but you could have a Hooters next to a kindergarten school overnight,” Siskopoulos said in an interview with The Eagle, referring to how he sees the implications of court findings so far. “People have a right to have community standards apply.”

He said the appeals ruling sets the state on a “slippery slope” in which judges could pick and choose whether or not a petitioner had sent enough notice, not necessarily the required notice.

Mark Esposito, an attorney representing the city and Verizon, has asked the SJC to deny the appeal on the grounds that the appeal itself was made outside the window for challenging the May appellate court ruling. He argued that previous courts had accurately read established law on notices.

“Plaintiffs effectively seek to read a requirement of actual notice to abutters into Chapter 40A,” Esposito wrote in his filing. “Had the Legislature intended to require proof of receipt of actual notice to each abutter, it would have required service by sheriff or by certified mail, return receipt requested.”

Siskopoulos said he said he expects the SJC will decide whether it will hear the case sometime after Labor Day. If the case is taken up, the parties could have a decision early next year.

Cell tower opponents say city attorneys have a conflict of interest. And they want a judge to rule in their favor against Verizon

Neighbors living near a Verizon Wireless cell tower in Pittsfield are asking a judge to rule in their favor after attorneys for the city failed to respond to their July lawsuit. The neighbors also argue that the attorneys now defending the mayor, city solicitor and Board of Health should be disqualified from working on the case.

John D. Jarrell of Coventry, R.I., who heads the new ownership group, 877 S St Pittsfield LLC, said the property will continued to be marketed as office space. “Our intention was to continue to fill it and provide quality rental space for the area,” Jarrell said.