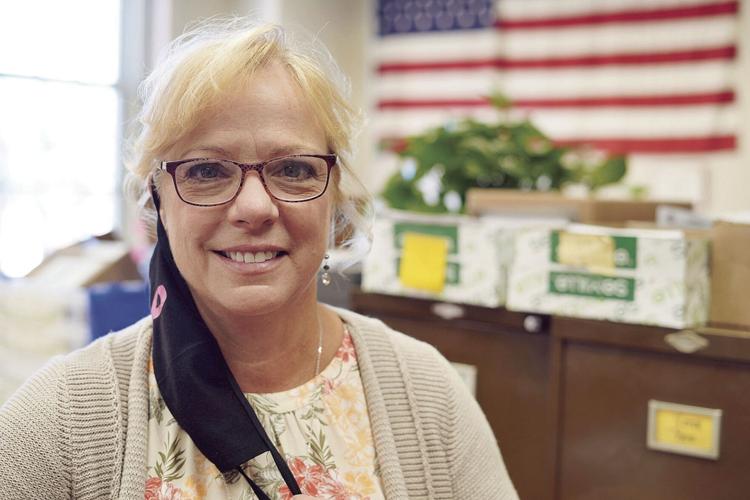 Michele Benjamin, Pittsfield’s city clerk, refuted a candidate's claims about elections. The primary is on Sept. 6. 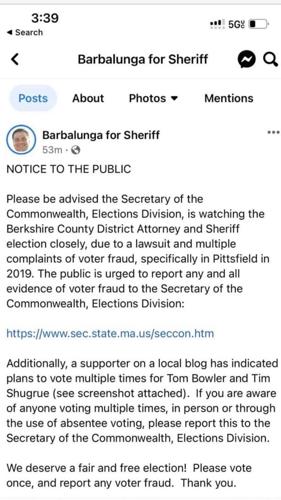 A post was published Wednesday on the official campaign Facebook page of Alfred E. “Alf” Barbalunga, a candidate for Berkshire County sheriff. It contained allegations about the integrity of the elections process in Pittsfield.

City Clerk Michele Benjamin said Thursday that she viewed statements in the post as “irresponsible” and “false.”

Benjamin did not identify by name the politician who made the post she was responding to in her statement.

According to a screenshot, Barbalunga’s post opened with a statement in capital letters proclaiming the message a “notice.”

It then made claims about voting that Benjamin, in her statement, said were false, including that the Elections Division of the Secretary of the Commonwealth is “watching” the DA and sheriff races “due to a lawsuit and multiple complaints of voter fraud ...”

“There’s no truth to the post whatsoever, and the state Elections Division confirmed that,” Benjamin told The Eagle in an interview Thursday.

The Committee to Elect Alf Barbalunga issued a lengthy statement late Thursday in response to a request for comment. The campaign said that the post was written by a campaign volunteer, and was removed after it was seen by a campaign “leader” and deemed to be “technically inaccurate.”

The statement said the volunteer made the post after hearing about a call the campaign said Barbalunga had with officials from the Secretary of State’s Election Division.

According to the campaign, Barbalunga told the state about a comment left anonymously on a post by a local blogger. The commenter claimed they could vote multiple times, echoing false claims that have been used to sow doubt in US elections.

The campaign conceded it had no way of knowing whether the post was “true or false,” yet the volunteer included a screenshot of it in the since-deleted Facebook post.

Benjamin, the longtime city clerk whose office oversees elections in the city, said she confirmed with the state there “have been no confirmed reports of violations of election laws by election officials in Pittsfield.”

She said the state division is “not party to or privy to any lawsuit regarding any elections in Pittsfield and they did not receive ‘multiple complaints of voter fraud’ in Pittsfield in 2019,” as Barbalunga claimed.

In 2020, the husband of Pittsfield Mayor Linda M. Tyer sued her challenger in the 2019 election after the challenger suggested he tampered with ballots.

That allegation by Melissa Mazzeo, Tyer’s challenger in the Nov. 5, 2019, election, was investigated by the state Elections Division, which found it to be baseless.

Mazzeo had claimed that a recount was needed because of “significant concerns my campaign has about the integrity of the election here in Pittsfield.”

The recount affirmed the original result.

Benjamin said that process showed the city’s ability to conduct a fair and accurate election.

“I feel that we proved ourselves by the recount in 2019 that these are fair elections for all candidates,” she told The Eagle.

The city complies with all state and federal election laws and “every person involved in the election has taken to heart the oath they have sworn to uphold the laws of the Commonwealth of Massachusetts,” she said.

“Elections in Pittsfield are honestly and fairly held for all candidates,” Benjamin said in her statement. “The City of Pittsfield and the Secretary of the Commonwealth take violations of election law very seriously and encourage anyone with concerns to bring it to our attention.”

Benjamin said elections officials “confirmed to me that the post was not accurate, and they communicated that to the person who posted the statement.”

“It’s disheartening that people can make [a] false accusation,” the city clerk said.

The primary is Sept. 6 and early voting has begun. There are county elections and state elections on the ballot.

This story has been updated to include a response by the Barbalunga campaign.

Our Opinion: A look at the post-primary picture painted by Berkshire voters' decisive choices for district attorney and sheriff

In siding with Mr. Shugrue as the new district attorney and Sheriff Bowler for another term in office, the Berkshire County electorate sided with the candidates who leaned on their relevant experience, knowledge and the ability to the jobs for which they were campaigning.